Copyright: © 2012 Ahmed H, et al. This is an open-access article distributed under the terms of the Creative Commons Attribution License, which permits unrestricted use, distribution, and reproduction in any medium, provided the original author and source are credited.

The 1,3-Propanediol of formula CH2OH-CH2-CH2OH is a neutral, stable, sticky, miscible liquid in the water and in the alcohols, the density as of 1.06 and boiling point with atmospheric pressure of 214°C [1]. It is at present used in the chemical synthesis of polyesters and polyurethanes, agent of tobacco elaboration, the lubricant of type polyalcohol, solvent, and as food additive [2]. The synthesis of 1,3-Propanediol can be realized with chemical way from the hydro carbonation of the oxide of ethylene or of hydration of acrolein in hydroxypropanol followed by a catalytic reduction [3]. These expensive processes implement toxic products (acrolein) and generate intermediaries compound and secondary not useful whish make them little profitable. At present, the production of 1.3-Propanediol by biologic way represents a good alternative if the production cost allows it [4]. Numerous bacterial strains realize the fermentation of glycerol in 1,3-Propanediol: Klebsiella pneumoniae, Escherichia coli, Citrobacter freundii, Lactobacillus brevis, Clostridium pasteurianum, Clostridium acetobutylicum and Clostridium butyricum [5-11]. The aim of this study is to propose different fed-batch strategies during the fermentation of glycerol into 1,3-Propanediol, which show the influence of the initial concentration in glycerol and the feed flow on the behaviour of Clostridium butyricum.

Clostridium butyricum strain used in all our experiments was isolated by the team of professor Petitdemange (Biologic Chemistry Laboratory of the Faculty of Science of Nancy - France) able of growing on industrial glycerol and allows the appearance of only two coproducts (acetic and butyric acid). Glycerol used as carbon substratum and of energy is produced during the transformation of oil of colza in ester fuel.

We used medium RCM (Reinforced Clostridia Medium) in a concentration of 38 g/L accompanied with a degassing by the nitrogen (0.5 vvm) to reactivate Clostridium butyricum spores further to a thermal shock of 10 mn in 80-85°C. So it allows discount in culture and the maintenance of strain. The sterilization of the cultural mediums is 120°C for 20 mn. Fed batch cultures are led in a reactor APPLIKON of 7 L jar, incubated during 24 hours in 32°C, led by an agitation speed to 200 rpm to assure gas exchange and not to cut through bacteria. The regulation of the pH in 6.9 is assured by the addition of a solution concentrated by KOH 2 N. The experimental protocol of the various strategies of fermentation is presented in the table 1.

The determination of the cellular concentration (biomass) is esteemed by measure of optical density (OD) by spectrophotometer in 660 nm [12].

The organic acids (acetic and butyric acid) are determined by HPLC (spectrophotometer to UV) and the glycerol’s with the 1.3-Propanediol are measured by HPLC (differential Refractometer). The characteristics of the analysis by HPLC are: Eluant: H2SO4 in 0.04 N, debit: 0.7 mL/mn, temperature: 65°C, column: polypore H 25 cm 7 mm, injector: 10 μL, lasted analysis 15 mn/sample.

Gram colouring is made regularly to control at the same moment any risk of contagion and presence or not of spores. The colouring is based on the differences of composition of the bacteria wall. Indeed, if bacteria are positive Gram, they seem purple and rose if they are negative Gram [13].

The made analysis allow to follow evolution during the time of the concentrations of the present constituents in the medium of culture: biomass X=f(t), residual glycerol S=f(t) and metabolites: P=f(t).

Volume in the reactor in L (V) Yields

The yields on conversion of the glycerol in biomass and products represent the slopes of the following equations:

Results of the batch fermentation

A batch culture begun with an initial concentration in glycerol of 70 g/L is made to determine profiles and kinetic parameters of the fermentation to choose flow and pulse of feeding in fed batch cultures. According to results mentioned on the figure 1, it appears that the growth of Clostridium butyricum on the glycerol is characterized by an absence of the phase of latency which indicates that the inoculated cells were in full exponential phase and the perfect adaptation of the strain in the culture medium (glycerol). This growth begins with an initial concentration of biomass of 0.1 g/L and arrives after 20 hours of fermentation at a cellular concentration of 2.7 g/L. This cellular multiplication leads to the production of 14.62 g/L of 1.3-Propanediol, 4.05 g/L of butyric acid and 1.85 g/L of acetic acid at the end of fermentation.

Clostridium butyricum multiplication on glycerol is characterized by a maximal specific rate of growth (μmax) of 1.82 h-1 obtained after 20 hours from fermentation. The classic pathway of the strain growth leads to a strong production of 1.3-Propanediol with a specific rate (π1,3PD max) of 9.84g/g.h and a weak production of secondary metabolites: butyric and acetic acid respectively with maximal specific rates (πBut and πAcet) of 4.27 and 0.32 g/g.h (Table 2)

Table 2: Specific rate of growth, consumption of glycerol and production of 1,3-propanediol, butyric and acetic acid during batch fermentation.

Cultures with 50 g/L of glycerol and with flow of 2.5, 3.5, 4.5, 5 and 10 g/h: The interest of this work is to study the influence of the feeding flow on the behaviour of Clostridium butyricum in fed batch cultures begun with an initial concentration of glycerol of 50 g/L and an initial volume in the fermentor of 1.5 L. The pulse was fixed at 0.03 L/h and the flow varies from 2.5 to 10 g/h by variation of the concentration of glycerol in the substratum of feeding. Study was led by comparison of the evolution of concentrations in biomass, glycerol and metabolites. Obtained results show a variation of the behaviour of Clostridium butyricum according to the adopted flow. This strain directs its metabolism towards the way of production of 1.3-Propanediol and of butyric acid or towards the pathway of production of the acetic acid according to the concentration of glycerol accumulated in the reactor. Table 3: Concentrations of biomass, glycerol, 1,3-propanediol, butyric and acetic acid in g/L obtained at the end of fed-batch cultures.

Concerning culture fed with a pulse of 10 g/h, we noticed a strong accumulation of the glycerol in the culture medium, which arrives to 230 g/L. This concentration of toxic substratum for the strain influenced cellular growth (1.9 g/L). The concentration of the acetic acid produced during this fermentation is to the order of 6.33 g/L. The table 4 indicates kinetic parameters obtained during Clostridium butyricum fed batch fermentation. Cultures fed with 3.5 and 5 g/h allow having a very high μmax of the order of 0.53 and 0.4 h-1. The specific rate of production of the acetic acid is especially raised during the last fermentation with an πAc max of 0.64 g/g.h.

Cultures with 100 g/L of glycerol and with streams of feed of 2.5 and 10 g/hour: To study the incidence of the initial concentration in substratum on profiles and kinetics of conversion of the glycerol in 1,3-Propanediol by Clostridium butyricum, two fed batch cultures begun by 100 g/L of glycerol and fed by 2.5 and 10 g/hour were made. The analysis of the profiles of the evolution of the biomass concentration and metabolites production during these two fed batch cultures (Figure 4, 5 and Table 5) shows us: Table 5: Concentrations of biomass, glycerol, 1,3-propanediol, butyric and acetic acid in g/L obtained at the end of fed batch culture.

During the first fermentation fed by 2.5 g/h of glycerol and initially the begun by 100 g/L of substratum, biomass obtained at the end of fermentation is of 1.4 g/L with an exponential phase which spreads out during all the duration of fermentation. This cellular growth is accompanied by a strong consumption of glycerol (residual glycerol is of 31.1 g/L) and a strong production of 1,3-Propanediol and butyric acid respectively of 31.1 g/L and 11.55 g/L. The concentration of the acetic acid produced during the fermentation is very weak of the order of 4.1 g/L.

For the second culture fed by 10 g/h of glycerol and initially the begun by 100 g/L of substratum, an absence of the phase of latency is observed which indicates the viability of cells during the fermentation. Obtained cellular density is of the order of 1.99 g/L during the first hours of the fermentation. At the time of the feed in glycerol, cellular lyse is observed involving a decrease of the biomass and accumulation of glycerol in the fermentation medium (288.2 g/L). The answer of the strain to this physiological stress is manifested by a weak production of 1,3-Propanediol and butyric acid respectively of 3.13 and 1.49 g/L and a strong accumulation of the acetic acid of the order of 13.68 g/L.

- The pathway of synthesis of the 1,3-Propanediol, which does not produce energy but uses the reducing elements.

- The pathway glycerol-acetic acid, which leads by molecule of consummate glycerol to the forming of two ATP molecules, two NADH+H+ molecule and a molecule of hydrogen.

Fran this analysis, it springs that the way glycerol-acetic acid is indispensable for the bacterium because it supplies necessary energy for the growth and the maintenance of the cell.

The analysis of the kinetic parameters of two fermentations shows that for the first culture the exponential phase of the cellular growth extends during all the duration of fermentation with a μmax which is weak but constant of the order of 0.064 h-1 against a μmax of the second fermentation of 0.1158 h-1 during the first hours of fermentation (during the batch phase). On the other hand the specific rate of production of 1,3-Propanediol and butyric acid are more brought up during the first culture respectively of 1.266 and 0.431 g/g.h. As answer of physiological stress led by the accumulation of glycerol in the reactor the specific rate of production of the acetic acid (πAc max) is sharply superior during the second fermentation of the order of 2.479 g/g.h against 0.695 g/g.h for the first fed-batch culture (Table 6)

Carbon balance: To verify the reliability of obtained results, we are going to establish the carbon balance during the fed-batch fermentation begun by 100 g/L of glycerol and fed by 2.5 g/h with substratum. This balance allows us to compare the quantity of carbon brought in the beginning of fermentation and quantity found in the end. We consider that the chemical formula of the biomass is of C5H7NO2 (chemical comparison averages bacteria). Furthermore, during the forming of a mole of acetic acid there is release of CO2 mole while during the forming of a mole of butyric acid there are two moles of CO2. We consider also that the main products of the cellular metabolism are the 1,3-Propanediol, butyric acid and acetic acid (Table 7 and Figure 6). 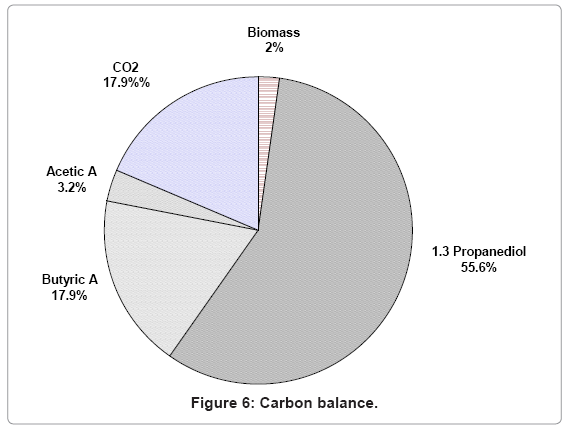 The carbon balance is curled in a percentage of 96.7 % what brings us to conclude that uncertainty on measures is acceptable.

Modelling of fermentations: To quantify the effect of the feed flow in glycérol in the évolution of Clostridium butyricum and in the profiles of production of metabolic, we attempted to translate under shape of mathematical equations these various effects. This obtained model allows estimating performances fermentors of a culture by the knowledge of the initial concentration in glycerol, the feed flow and the concentration of glycerol in the substratum of food. To realize this modelling we estimated the specific rate of growth (μ), of consumption of substratum (Qglyc) and production of metabolic (πP) (Table 8 and Figure 7)

Table 8: Values of the kinetic parameters in the obtained model. 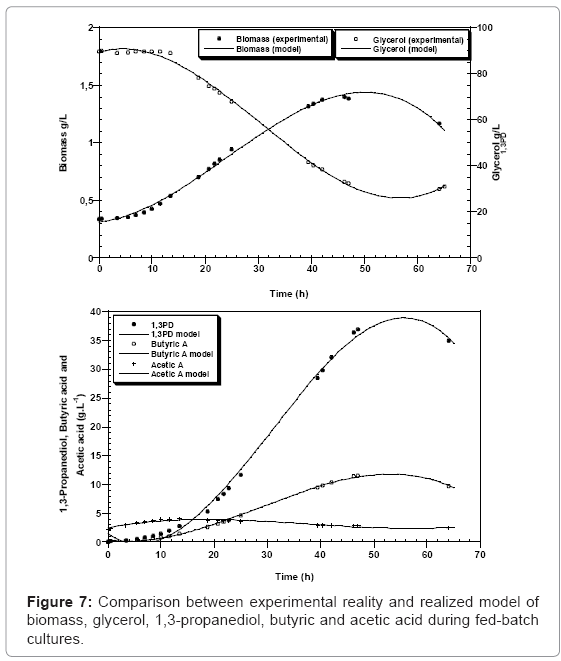 For the growth and the consumption of the glycerol:

For the metabolic production:

I hold in thank particularly Pr. Michel Fick to have me to help to realize this work as well as all the team of the laboratory GPBA. 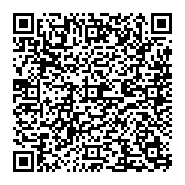