Copyright: © 2013 Detti B, et al. This is an open-access article distributed under the terms of the Creative Commons Attribution License, which permits unrestricted use, distribution, and reproduction in any medium, provided the original author and source are credited.

We report on a case of focal haematopoietic hyperplasia occurring in the haematopoietic marrow in a lumbar vertebral body, of a young man. The PET scan performed showed high uptake of the radiotracer in the vertebral body of L3 and a MRI of the lumbar spine confirmed the vertebral lesion. A biopsy of the L3 vertebral body lesion was performed and the histological result was of chronic myeloproliferative disease but the analysis performed consequently excluded the diagnosis of chronic myeloproliferative disorder, according to the WHO criteria. Focal benign hyperplasia is regarded a late reactive process after trauma, as well as the case reported

Focal haematopoietic hyperplasia is a rare and localized proliferation of the bone marrow to such a degree that it produces a tumor-like expansion. From the clinical course and follow-up information, the process appears to be benign [1].

This lesion is considered a late reactive process after trauma and it seems to be a form of pseudo-tumour, although it shows the clinical and radiologic features of a tumour. To our knowledge only four cases have been reported in the English literature [1-3]. We report on a case of focal haematopoietic hyperplasia occurring in the haematopoietic marrow of a lumbar vertebral body in a young man.

The young patient carried out a bone scan that did not show increased radiotracer accumulation; differently the whole-body PET performed with the glucose analogue FDG, showed high uptake of the radiotracer in the vertebral body of L3 (Figure 1). Similarly a MRI of the lumbar spine confirmed the vertebral lesion; more in details T1- weighted MR images of the lumbar spine showed an increased signal intensity in the aspect of the L3 vertebral (Figure 2); on T2-weighted images, lesion was not enhanced because the signal was equivalent to that of adjacent marrow. 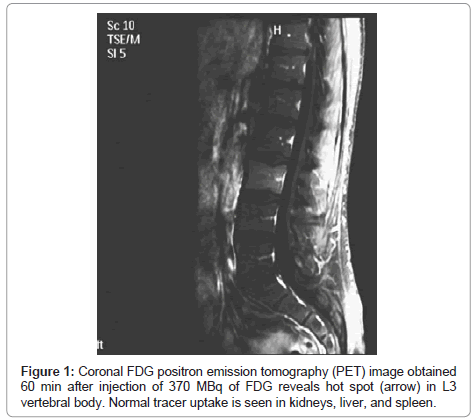 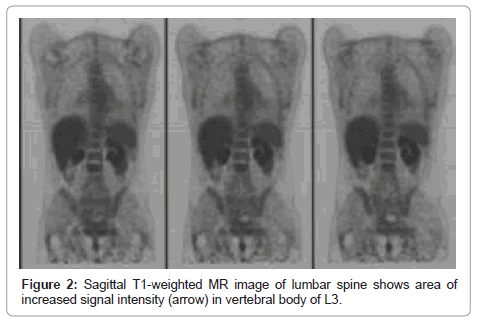 The patient was evaluated by our haematologist consultant who recommends performing a biopsy of the L3 vertebral body lesion. The histological examination showed a chronic myeloproliferative disease. All the analysis performed excluded the diagnosis of chronic myeloproliferative disorder, according to the WHO criteria (normal value of platelets and erythropoietin, absence of leuco erythroblastosis, absence of elevate value of haemoglobin and RBW, molecular cytogenetic analysis showing absence of chromosome Philadelphia and absence of Jak2 mutation).

A revision of the pathologic specimen was executed and it carried out the diagnosis of focal hyperplasia of haematopoietic bone marrow without neoplastic proliferation.

Our experience highlights several features according to other clinical cases reported in the English language literature: a solitary rib lesion reported in three asymptomatic patients with no evidence of associated hematologic disease [1,2] and a dorsal vertebral body lesion presenting in a patient with bronchiole-alveolar carcinoma [3].

Hyperplasia of the hematopoietic marrow is considered a form of pseudo-tumour. In the current report, from the histological point of view, the lesion was characterized by mixed areas of hypercellular marrow and merging fatty marrow, without presence of abnormal tumor cells or metastatic carcinoma cells: no abnormal cells were seen in the cellular morphology.

In fact hyperplasia of the hematopoietic marrow is considered a deviation from the adult pattern of red-yellow marrow distribution, with an increase of the red components. The marrow consisted of a proliferation of all hematopoietic components including erythroid, myeloid and megakaryocytic cells. The cellularity was increased by approximately 50-95%. The trabeculae of the cancellous bone were thin and disrupted, which resulted in severe osteoporosis, but osteoclastic activity did not appear to be increased [4].

Radiologically, this lesion appeared as an expansive and radiolucent formation and contained areas of increased density or calcification; the cortex was intact and no soft tissue extension was noted [4]. Marrow changes were diffuse with a marked decrease in signal intensity of the spinal and pelvic bone marrow on T1-weighted MR imaging. Sparing of the epiphyses and absence of moderately increased signal intensity on T2-weighted sequences aid in differentiating reconverted red marrow from neoplasm [5].

Under conditions of stress, yellow marrow can undergo reconversion to hematopoietic marrow [6]. Poulton et al. [7] studied MR images of 59 patients (more than 24 years old) in order to summarized the associations between marrow reconversion and age, sex, weight and smoking; they found that marrow reconversion in adults without known bone marrow disorders was statistically significant associated with heavy smoking, young age and especially obesity in female heavy smokers. Benign hyperplasia of the hematopoietic marrow is associated with mildly to moderately obesity and cigarette smoking with peripheral leukocytosis [7,8] Also long distance running is associated with this lesion: the study of Shellock et al. [9] analyzed different groups of population, healthy volunteers, patients with symptoms of knee disorders and asymptomatic marathon runners and it showed that the high prevalence of hematopoietic bone marrow hyperplasia in marathon runners may develop as a response to “sport anemia”, which is commonly found in aerobically trained athletes. Caldemeyer et al. [10] analyzed 15 endurance athletes, evaluating lumbar spine MRI images, bone mineral density and maximum oxygen consumption (VO2max). They concluded that changes in bone density do not contribute to magnetic resonance marrow changes consistent with hematopoietic hyperplasia.

Stabler et al. [11] described a significant form of hematopoietic hyperplasia in association with malignancies and chronic anemia. Also the administration of granulocyte-colony-stimulating (GCS) factors, used as an adjunct to radiation or chemotherapy treatments to decrease the myelosuppression, are in relationship with the development of hyperplasia of the hematopoietic marrow [12,13].

One theory that could explain the pathogenesis of hyperplasia of hematopoietic marrow considers the benign hyperplasia as a late reactive process after trauma or inflammation; we may agree with this pathogenetic mechanism considering that our patient was a long distance runner and he had a history of trauma occurred during a motorbike accident.

The second possible pathogenetic mechanism is an anomaly development, even though no detectable preceding lesions were found. In addition, several previous cases occurred in youth adults, so this possibility is likely remote. Maybe this lesion seems to be a late and reactive change of either inflammation or some unrecognized benign tumor.

To date, on the basis of all these experiences, when the marrow pattern showed in this review is detected incidentally in patients, particularly in obese smoking women, the findings can be considered to most likely reflect a benign process and if all haematological parameters are normal, the patients can be followed conservatively.