Copyright: © 2013 Wiratsudakul A, et al. This is an open-access article distributed under the terms of the Creative Commons Attribution License, which permits unrestricted use, distribution, and reproduction in any medium, provided the original author and source are credited.

Porcine reproductive and respiratory syndrome virus (PRRSV) and Mycoplasma hyopneumoniae are account as economically important pathogens worldwide [1,2]. Both genotype 1 and genotype 2 of PRRSV were detected in domestic pig farms in all regions of Thailand. Prevalence of PRRSV in domestic pigs in the country varied from 24.6-53.6% and the prevalence was 32.7% in the central region [3] where the density of domestic pig population is high. The recorded pig density in this region according to previous study was between 0.00 and 777.56 heads per square kilometer [4]. Nonetheless, the clusters of PRRSV were not associated with geographic distribution of the virus. The identical viruses were present in different provinces [5]. The PRRSV infected pigs are often co-infected with M. hyopneumoniae and other agents causing porcine respiratory disease complex (PRDC) [2,3]. The prevalence M. hyopneumoniae was previously reported at 2.08-45.00% in domestic pigs in Thaiand [6]. There was evidence suggesting that both PRRSV and M. hyopneumoniae can be transmitted via airborne over long distance up to 9.2 km from the source herd [7]. The exchange of these two agents between domestic pigs and wild boars might exist in Thailand especially in the high density area of pig production in the central region.

Wild boars are reared in Thailand for many purposes such as research activities, exhibition in the zoos and selling as exotic meat. At least three types of captive wild boar settings were recognized in Thailand including wildlife breeding research station, zoo and commercial wild boar farm [8]. However, the studies of PRRSV and M. hyopneumoniae in Thailand were restricted on domestic pigs in swine industry. Hence, the epidemiological status of these two pathogens in wild boars (Sus scrofa) is currently not available in the country.

Three wild boar captive settings were conventionally selected to represent each type of wild boar rearing. A wildlife breeding research station and a zoo are located in two major pig-producing provinces in the central region namely Ratchaburi province and Chonburi province respectively. These two provinces were recorded as the areas with highest density of domestic pig population in Thailand [4]. However, the information on wild boar population density is currently not available. Some important characteristics of each studied captive stetting are shown in Table 1.

Table 1: Some important characteristics of each studied captive setting and the area of study site.

The prevalence of the studied diseases was unknown in these locations and populations. Thus, sample size in this study was calculated based on 50% estimated prevalence with precision of 5% which resulted in highest number of samples required. A statistical package named SAMPSIZE was used in our sample size calculation (http://sampsize.sourceforge.net/iface/). Since the total number of animals in all these studied premises is low, all wild boars in each captive setting were required to be tested according to the calculation.

Between February and March 2009, fifty-two wild boars were captured for blood sample collection; 19, 16 and 17 samples were derived from commercial wild boar farm, wildlife breeding research station and the zoo respectively (sampling fraction=95%, 100% and 100%). After collection and processing, serum samples were then securely delivered to serological laboratory of the Monitoring and Surveillance Center for Zoonotic Diseases in Wildlife and Exotic Animals, Faculty of Veterinary Science, Mahidol University within 24 hours.

Table 2: Number of samples tested and number of positive samples as well as prevalence for porcine reproductive and respiratory syndrome virus (PRRSV) and Mycoplasma hyopneumoniae in wild boars derived from three different types of captive settings including a commercial wild boar farm (VS), a wildlife breeding research station (KS) and a zoo (KK) in Thailand.The sensitivity and specificity of the ELISA essay for PRRSV are 99.9% and 98.8% and the values are 37.3% and 98.6% respectively for Mycoplasma hyopneumoniae testing. 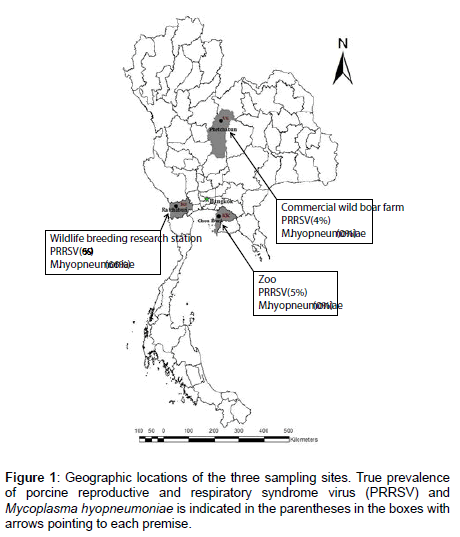 Figure 1: Geographic locations of the three sampling sites. True prevalence of porcine reproductive and respiratory syndrome virus (PRRSV) and Mycoplasma hyopneumoniae is indicated in the parentheses in the boxes with arrows pointing to each premise.

The highest true prevalence of PRRSV was detected in the wildlife breeding research station in Ratchaburi province, the province where co-circulation of multiple clusters from two genotypes of PRRSV in domestic pigs was reported [9]. Besides, Ratchaburi is the province that possessed highest record of domestic pig density in Thailand [4]. With this high density and co-circulation of multiple clusters of PRRSV in the province, it is possible that this particular pathogen was shared between wild boars and domestic pigs reared in this area. An in-depth investigation is needed to explore the genetic linkage of the PRRSV found in domestic pigs and wild boars and further determine whether wild boars can serve as reservoir of the disease for domestic pigs in that location. Nevertheless, only 2% seropositivity of PRRSV was found in wild boars population lived in the wild in a previous study conducted in the US [1]. It is noticeable that prevalence of PRRSV found in captive wild boars in the current study was much higher than the prevalence detected in free-ranging wild boars in the previous work. It is possible that more contacts between animals in captive settings trend to increase disease prevalence compared to the same species that lives in the wild. However, low level of prevalence of antibodies to PRRSV was found in the commercial wild boar farm and the zoo. More study sites and samples are required to conclude the overall PRRSV infectious status of captive wild boars in Thailand.

Furthermore, a sample derived from this wildlife breeding research station was the only one hepatitis virus positive sample found in a previous study conducted in the same populations as in the present study [8]. The possible reason for detecting multiple pathogens in this captive setting is likely associated with the source of animals. The animals reared in this wildlife station were mostly adopted from different unknown sources at different times while the sources of wild boars in the commercial wild boar farm and the zoo were well identified. It was suggested from previous study that introducing of infected replacement pigs into the farm was an important factor of PRRSV spreading in Thailand [5] and PRRSV can persist in pig’s uterine tissue for several months [13]. The persistent infection also occurs in case of M. hyopneumoniae. The infected pigs can be convalescent carriers of M. hyopneumoniae for up to 200 days [14]. The previous studies also revealed that antibodies against PRRSV and M. hyopneumoniae can persist in the infected pigs for more than 28 [15] and 12 [16] months post infection respectively. Thus, the seropositive results found in this study can reflect the infections happened in these populations in many months earlier. However, antibody detection methods were used instead of detecting the antigens. The current infectious status of the animals in these settings was not known.

The persistency of these two pathogens is likely to allow the diseases to silently infect the animals unnoticeably after the replacement wild boars were introduced into the captive settings. Therefore, it is suggested that the newly introduced animals should be tested for important infected pathogens such as PRRSV and M. hyopneumoniae and should be quarantined before introducing into the herds.

The present study illustrated the picture of PRRSV and M. hyopneumoniae seropositivity in three premises representing three types of wild boar captive settings. More locations and samples are required in order to obtain more accurate infectious status of these diseases in Thailand. Since PRRSV and M. hyopneumoniae are prevalent elsewhere such as USA in feral wild boars that habit in the wilds [1], the future study should also expand to this type of population.

This study is the first to report seroprevalence of antibodies to PRRSV and M. hyopneumoniae in wild boar populations in Thailand. More detailed investigations are critically needed.

This study obtained financial supports from The Monitoring and Surveillance Center for Zoonotic Diseases in Wildlife and Exotic Animals, Faculty of Veterinary Science, Mahidol University. The authors gratefully thank all staffs in all captive settings for supporting us in animal restraint and facilitating this study. The authors are grateful to the two reviewers for their valuable comments and suggestions.