A Fatal Motorcycle Accident, UK Road Traffic Legislation Since 1903 and Recent Changes in the Law

Copyright: © 2011 Bruce-Chwatt RM. This is an open-access article distributed under the terms of the Creative Commons Attribution License, which permits unrestricted use, distribution, and reproduction in any medium, provided the original author and source are credited.

The risks of traveling by motorcycle are well recognized, both in terms of excess speed and relative lack of physical protection. Legislation since 1903 has been on-going to try to reduce the carnage on the roads and to recognize the financial problems that such a death leaves behind for the families of the victim. An overview of speed cameras currently in use is given with the more frequent use of ANPR (automatic number plate recognition) cameras for surveillance of known and suspected criminals, valid car insurance verification, current Ministry of Transport mechanical certificates and, increasingly, for with average speed calculation between camera sites. The latter resulting in the surprising and unexpected penalty notice in the post often many days after the incident, though to be legal in England and Wales, it must be served with 14 days of the infraction. Discussed in this case, and of considerable interest, is the hypothesis that a full-face helmet for a motorcyclist may be potentially more dangerous in a crash, due the increased weight, inertia and pendulum effect result in an increased risk of fatal basal skull ring fractures.

A landmark ruling now allows the family and relatives of motorcyclists to claim compensation where the accident was preventable, but the person or persons who caused the accidents are unknown. This application must be within three years and all applications made to the Motor Insurers Bureau set up to compensate victims of uninsured or untraced drivers [1].

It is a well known, though unfortunate fact, that motorcycle travel fatality rates are the highest of all forms of mechanically propelled vehicles on our roads; a combination of innate instability, speed and sadly, the occasional risk-taker that ride them. The landmark ruling above was, in a way, a reflection of a blame society, but if someone is genuinely not at faults, a welcome test case for the law of precedence. Britons have a one in 200 chance of dying in a road crash, are 30 times more likely to die in a road crash than win the National Lottery and at 153.45 per 100 million journeys compared to the cars at 10.34, a person is 15 times more likely to die on a motorcycle than in a car [2]. The only more dangerous mode of transport in the UK is horse riding which, statistically, is the most dangerous of all (Figure 1).

With these figures is it hard to understand why anybody uses one, despite the traffic, with motorcyclists sometimes referred to by some cynical transplant surgeons as: organ donors". Despite laws limiting speed, clear road side signage and surveillance speed cameras there is still the temptation for some motorists to see how far they can "push the envelope", including taking video film of such high speed runs. There have been successful prosecutions when these clips have been posted on www.youtube.com and then used as evidence by the traffic police in Court.

On 05/04/2002 at 08:40 hours the body of L.T, of estimated age late 40's, lying at the road side at the lower end of Shirley Church Road, near Spout Hill, South London UK had life clinically, formally and legally pronounced extinct by the author. Cars had been indirectly involved in that the victim had allegedly swerved to avoid a collision with "a green van", lost control, skidded, left the road and then struck a lamp post. The London Ambulance Service had attended, had removed his crash helmet, but had been unable to do anything further. They had remained on scene to remove the body once the traffic police had taken measurements and photographed the scene (Figure 2a-2d). On my examination the triad of Bichats's signs were all present: Asystole, apnoea and pupils dilated and fixed. Figure 2: (a) Bleeding from right ear, possibly basal skull fracture. (At the postmortem, on 09/04/02, a transverse hinge fracture was found at the base of the skull). (b) Primary impact site against the lamp post. (c): Wrecked motor bike, front faring in the background. (d&e) General view of the crash scene with road, lamp post, body and motor cycle.

The angle of the head was possibly suggestive of a broken neck. These injuries were consistent with a high speed motorcycle accident and no treatment would have been possible for these, probably instantly, fatal injuries.

The traffic officer was advised that life had now formally been pronounced extinct and as a Coronial matter, [3] was to be reported as soon as possible to the Croydon Coroner. A series of digital photographs were taken by the author, as seen and described below.

The post-mortem examination on 09/04/2002 with formal identification was performed on the 09/04/2002 at Croydon public mortuary, the salient features being italicised.

1. The left leg was distorted and externally rotated with minor abrasion of the knee and a penetrating laceration of the left thigh associated with a fracture.

2. Patchy bruising of the left side of the face and head with deep bruising and an underlying fracture of the skull.

3. A transverse hinge fracture of the base of the skull.

5. Transection of the aorta at the arch with extensive haemorrhage into the mediastinum and chest cavity.

Death was due to a high impact road traffic accident, with blood and urine samples retained for toxicological analysis. The cause of death was given as: 1a. Multiple injuries.

France was the first country, in 1893, to introduce a driving test, vehicle registration plates and parking restrictions. By 1903 the first car and drivers licences had been introduced in the UK. The latter cost 5 shillings (25 pence) and both were renewable every three months at a Post Office. There was still no official or formal driving test, but by1916 the London 'Safety First' Council had introduced a range of road safety initiatives.

In 1930 a driving test was introduced for disabled drivers, vehicle examiners were appointed, a minimum driving age was set at 17 and a maximum urban speed limit of 30 mph was introduced. The Highway Code was published for the first time in 1931, public service vehicle (PSV) testing came in 1931 and cats' eyes, invented by Percy Shaw, in 1934, were also introduced. In 1934 alone, 7,343 people had been killed on Britain's roads, despite there being just 2.4 million vehicles on the road, 1.5 million of which were cars, compared to over 30 million in 2007 with 3,180 people killed, thus commensurately fewer today [4]. In the face of this apparent slaughter, Sir Leslie Hore- Belisha, the Transport Minister, brought in the Highway Code and the driving test on March 13 1935. The eponymous Belisha beacon would have to wait until 1949.

The 70mph upper speed limit on motorways became law in 1964 and obligatory crash helmets for all motor-cyclists were introduced in 1974. To allow for minor errors of vehicle speedometers, a 10% variation is allowed for plus 2 mph, thus technically allowing a car to travel at exactly 79 mph before an offence is committed. There are slight variations in this absolute limit in some of the counties of the UK.

The increasing deployment since 1992 of speed cameras in the UK has lead too greatly increased numbers of recorded speeding offences and fines, with successful prosecutions for warning other drivers about them [5].

The practice of "surfing", a mere slowing down for the camera zone, has now been much discouraged on major roads by the use of two cameras with ANPR (automated number plate recognition) technology, recording the average speed over a fixed distance. This has been in use for some time on European motorways, with drivers passing through automated toll-booths, paying the toll and collecting a fine as well...

The commonest United Kingdom speed, or safety, camera is the "Gatso" (Figure 3a), which automatically measures the speed by radar and photographs the rear of the vehicle as it enters or exits the graduated painted lines on the road. This was the type first introduced in the UK in 1992 and Twickenham Bridge on the West-bound carriageway of the A316 was the site chosen for this first one in England. They are seen respectively in the series of photographs. Those which involve an operator are the Safety camera van (Figure 3g) using a laser gun to measure the vehicle speed and the mobile laser (Figure 3h) uses a hand-held device to record the speed in either direction using infra-red and/or camera.

The graph below gives a good overview of general trends in the United Kingdom following the introduction of various safety measures since 1927. The large increase in road deaths in 1940 was due to the introduction of the wartime black-out regulations with no street lighting at all, houses heavily black-out curtained and hooded or blue filtered lights for lorries, buses, cars, motor cycles and bicycles. All the edges of vehicle mud guards were painted white though, in attempt to make them stand out and show the general outline [6] (Figure 4). The introduction of crash helmet legislation in 1974 for motorcyclists did not help the man who died in this case. He had been wearing a full-faced one at the time of the crash, and had sustained a transverse hinge fracture of the base of the skull, here extending across the dorsum sellae. The most severe type of basal skull fracture being the ring fracture, around the foramen magnum and, if complete, is usually immediately fatal due to injuries to the brain stem, though avulsion and laceration of major blood vessels in this region are often concomitant. Basal skull fractures are associated with high-impact, high-energy trauma from road traffic accidents and whilst full-face helmets, such as the one worn by this victim, protect users from facial injury, some investigators have now noted a prevalence of basal skull fractures from a 'pendulum effect' in full-face helmet users [7]. This is the worrying, but not unreasonable, hypothesis that the interia of the head, with the increased additional mass of the helmet, has promoted basilar skull fractures in some (Figure 5) cases, as here, when there were no signs of a helmet impact [8]. There was a vogue some years ago, now less seen, for motorcyclists to have a sticker on their helmet reading: "Do not remove my helmet in event of a crash", as they feared further neck injury. It would appear that two fatal injuries were already present by the time the ambulance got to the scene of this accident. In this case, where he had also transected his aorta, it makes the observations about major brain stem blood vessel damage somewhat academic, but seemingly to confirm that whatever had happened, this had, in any event, been an incident that had occurred at high speed, with a sudden and very rapid deceleration; a decidedly fatal quadruple combination of speed, circumstance and two clinically un-survivable road traffic injuries, resulting in yet another addition to the grim statistics. 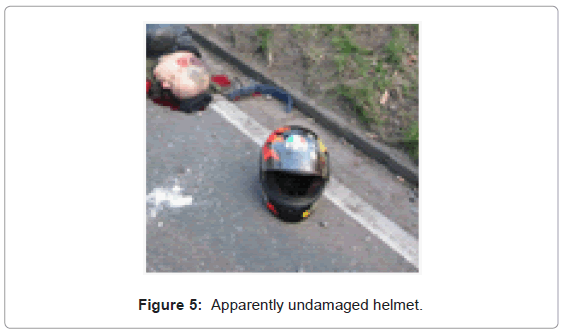