Copyright: © 2012 Chaurasia N, et al. This is an open-access article distributed under the terms of the Creative Commons Attribution License, which permits unrestricted use, distribution, and reproduction in any medium, provided the original author and source are credited.

Asphyxial death is a common incident in forensic practices, and determination of the manner of death that may be accidental, suicidal, homicidal, or natural is of utmost significance. In such deaths, a detailed and meticulous autopsy plays a major role to solve the case while the scene investigation and collection of samples have their own significance. Domestic violence plays a great role in suicidal and homicidal violent asphyxia deaths. Various epidemiological and demographical parameters of the study are described in the present study. Increasing deaths due to asphyxia are one of the most important causes in violent deaths. During the 4 year period from January 2008 to 31st December 2011, there were 542 asphyxial deaths autopsied conducted by the Department of Forensic Medicine, IMS-BHU Varanasi, India. Asphyxial deaths comprise 6.95% of all forensic autopsies; 35.79% of the cases are aged between 21-30 years; Males constitute 60.89% of all the cases. The most frequent method of asphyxiation death is hanging (283 cases, 52.21%), followed by drowning (45.02%) and suffocation (0.55%). More violent methods, such as ligature or manual strangulations, constitute 2.21% of all asphyxial deaths, respectively. Although it was varying according to the methods of asphyxiation, suicide was found to be the manner of death in the majority of the cases

In today’s world, crime and violence has a great proportion of human lives. In spite of advancing civilization, killing self or someone is so easy in these days. With the gradual improvement of our society, although we are able to control death rate by using advanced technology but we can overlook that there is certainly increase in unnatural deaths may be due to accidents, suicides and even homicidal deaths are reported day by day.

Hanging is being commonly seen in suicides and strangulation as one of methods in homicides. According to the National Crime Records Bureau of India, suicide is among the top ten causes of death in India. Suicide is also among the top three causes of deaths in India between 16 and 35 years age group. In the history, we too find that based on the legend of Kali, the Goddesses followers were not allowed to spill blood when they killed. To get around this technicality, they strangled their targets [1].

According to WHO report, in 2000 the 86000 people were died due to drowning in India, after China. India is the country having highest incidence of drowning in developing countries (WHO report) [6]. In this study an attempt has been made there undertaken in the view to gain, further knowledge and insight in to epidemiological trend and pathological aspects of asphyxia deaths in Varanasi area to add in the existing volume of knowledge in the subject with the view to help the process of scientific crime investigation and administration of criminal justice.

A cross-sectional retrospective study of violent asphyxia deaths was done by collection of secondary data from medico legal autopsies conducted in the Department of Forensic Medicine, IMS-BHU, and Varanasi from 1st January 2008 to 31st December 2011.

• The following parameters were studied;

Out of total 7803 autopsies in last 4 years, January 2008 to December 2011 was conducted in the Department of Forensic Medicine, IMSBHU, Varanasi, out of 7803 cases, 542 cases (6.95%) of violent asphyxia was reported. Incidence of hanging was (52.21%) reported in out of all asphyxial death and 3.6% of total autopsies, second most common manner of violent asphyxia was drowning death (45.02%), strangulation and suffocation were 2.21 and 0.55 respectively from total violent asphyxial death. Males were 60.89% and females were 39.11% of total violent asphyxial death. Incidence of drowning was more popular in male (68.86%), hanging is favorite manner of death in female (46.29%). The commonest manner of asphyxial death was hanging; In other hand we found that 21-30years. age group were more prone to violent asphyxia death (35.79%), 11-20 years. were second largest group i. e. 20.30%, 31-40years. and 61-70 years. Age group having almost constant tendency of asphyxial death in every year, 51-60 years. age group was 4th in total fatality, 1-10years. and above 70 years. having only 2.21% and 3.32% asphyxia death respectively. Out of total autopsies, 81.37% was Hindu, 4.61% was Muslim, no Christian victim was found and 14.02% victims were unknown. We could not report marital, educational and socio-economic status in all violent asphyxia death, because of their lack of information.

The present study showed a wide range of similarities and dissimilarities in findings and mode of violent asphyxial death with the works of other authors.

During the 4 years of study (January 2008 to December 2011) a total of 542 cases of fatal asphyxia were examined. These constitute 6.95% of all the forensic autopsies conducted (Table 1). To the other retrospective analysis of 10 years records from the period 1993–2002 in East Delhi (India), During the above period, 8385 Forensic autopsies were conducted [7], comparison to our observation 7803 forensic autopsies done in our Department (Forensic Medicine Department, BHU-IMS Varanasi) in above time period. The different short term studies from various parts of the country, like from East by Singh [8] gives the incidence of violent asphyxial deaths as 8.4%, from South Delhi [9] as 5.0% in the block years of 1977–1980 and 10.0% in block year of 1981–1991.

Amongst the 542 cases of fatal asphyxial death, our study shows that the manner of hanging was more; drowning was second one, in certain time period (Figure 1). 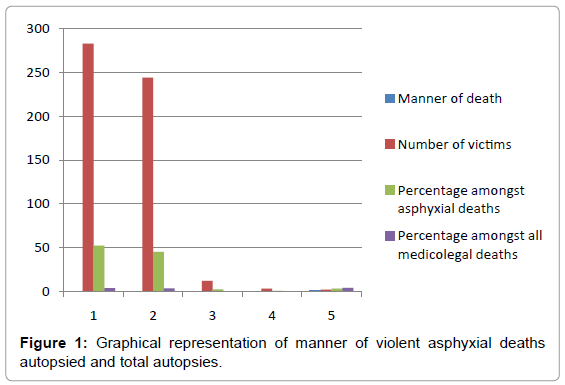 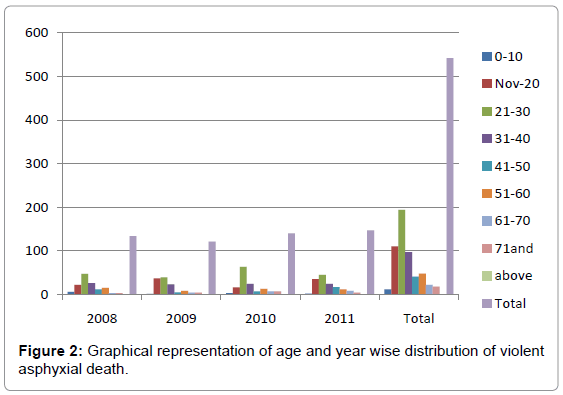 Table 6 shows that over all incidence of hanging were more than drowning death, maximum cases of hanging were reported in year 2011 i.e. 85 and year 2010 was lowest reporting year with 48 cases. Out of 12 strangulation cases males were 7 in number and rest females. Only 3 cases of suffocation death observed, all are male, in 2010 and 2011 no case of suffocation was found.

Overall, the incidence of males drowning was twice than that of females, this is similar to

WHO report 2000, Both China and India have particularly high drowning mortality rates and together contribute 43% of all drowning deaths worldwide [6]. Most of the deaths caused due to drowning (nearly 97%) occur in developing countries like India [6] in India, drowning is a common method of committing suicide especially amongst women, and more particularly in localities nearby the sea, river, dam or canal. Due to increasing stress in Life by various reasons the problem of suicidal drowning is getting worse day by day [13] but finding of our study do not support. Each year, drowning is responsible for an estimated 500,000 deaths around the world [14].

In asphyxial death, 81.37% was Hindu, 4.61% was Muslim, and no Christian victim was found in overall study. Religion of 14.02% victims was unknown (Table 7). In this study there is strong evidence which shows that Hindus victims were more significant (Figure 4), because of Hindu dominated population in Varanasi. 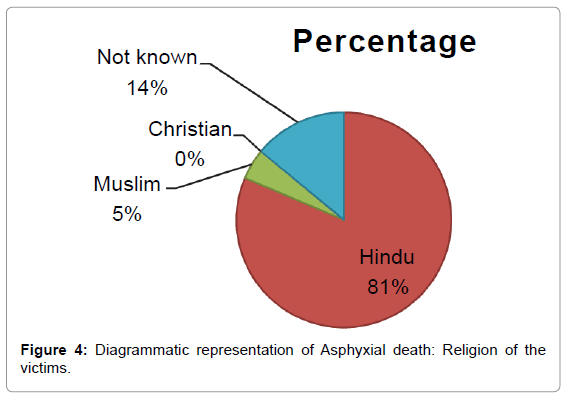 Figure 4: Diagrammatic representation of Asphyxial death: Religion of the victims.

Medico legal autopsies not only give the cause and manner of death but also give important statistical data related to legal incidents in the cities and regions where the autopsies are conducted. It is difficult task for forensic experts and scientific community to find out the exact cause of increasing number of unnatural violent asphyxial death. Finally our observation and result conclude that most of the victims are died due to hanging, death due to drowning dominated in male population, 21- 30 years. age victims was most commonly involved group. Number of asphyxia death cases, increasing every year, well-known risk factors of asphyxiations, could be easily reduced, but requires understanding of circumstances and predisposing factors and prevention for general populace. The further study need to other cities as well as countries could be done to provide a better understanding of the epidemiology of violent asphyxia death and how deaths by violent asphyxia may further be reduced.