Copyright: © 2012 Mohan Reddy N, et al. This is an open-access article distributed under the terms of the Creative Commons Attribution License, which permits unrestricted use, distribution, and reproduction in any medium, provided the original author and source are credited.

Obesity is a major health problem and is positively associated with breast cancer incidence and mortality [1,2]. In India obesity is a pandemic, and it leads to increased levels of fat in the body. Adipose tissue derived signaling molecules, including the adipokines, are emerging as key candidate molecules that link obesity with cancer. Increased adiposity tends to be associated with higher circulating levels of estrogens through greater peripheral conversion of androgens to estrogens by aromatase in adipose tissue; hence exogenous estrogen could increase the risk of breast cancer. Adiponectin gene is the most abundant human adipose-specific protein [3]. It belongs to a family of adipocytokines. The ADIPOQ gene consists of three exons and two introns spanning a 17-kb region and has been located on chromosome 3q27 [4]. Adipokines, particularly Adiponectin therefore has important roles in breast cancer biology. Polymorphisms of ADIPOQ have been associated with the risk for cancers, probably by affecting adiponectin plasma levels. Many studies have demonstrated that obesity could increase the risk of cancer, including breast cancer reduced plasma adiponectin levels were observed in patients with obesity. In obese patients, adiponectin, a protein secreted by adipose tissue, has lower expression than that in non-obese subjects this may be associated with an increased risk for developing breast cancer [5].

Various Single Nucleotide Polymorphisms (SNPs) have been identified in the adiponectin gene. One of these SNPs, 45T/G, in exon 2 of the adiponectin gene, has been frequently reported in association with obesity, and breast cancer, and second, rs1501299 (G276T) is in intron 2 of the ADIPOQ gene and does not have a known function. It is probably a marker of some other variant affecting adiponectin expression. To our knowledge, genetic polymorphisms of the adiponectin gene in south Indian population have not yet been studied. In addition, there is very little information about the genetic susceptibility to breast cancer in Indian population. Therefore, in this study, we investigated two SNPs (rs1501299 (G276T) and rs2241766 (T45G)) in ADIPOQ gene and their possible association with breast cancer susceptibility in obese women.

Breast cancer patients were assessed by pathologists on the basis of clinical examinations as well as mammography and clinicalpathological examinations. The breast cancer study is a Hospital-based case-control study conducted in South Indian population. All incident breast cancer cases were newly diagnosed during the study period. Ethical Committee approved the study for the benefit of humans in general. The procedures followed were in accordance with the ethical standards of the responsible committee of the Institutes/Hospitals, to participate in a face-to-face interview using a structured questionnaire.

Senior pathologists confirmed all diagnoses. We interviewed and collected the data about the patient demographic factors; collected the information on age, menopausal status, smoking, usual alcohol intake, BMI and previous cancer diagnoses. Participants were also asked about their family history of cancer, and the clinical information in these cases was obtained from medical records like tumor size, Grade, Axillary nodes, and whether they were receiving chemotherapy, hormonal therapy or radiotherapy. Patients were recruited following certain inclusion and exclusion criteria, which were determined before the beginning of the study.

Inclusion and exclusion criteria: Patients included in the study were women with breast cancer who were found to have positive (tumor-involved) axillary lymph nodes and BMI of >27 kg/m2 at the time of surgery. Patients must have adequate blood counts, and adequate kidney and liver function. Underweight Patients were excluded from the study.

Based on the above criteria, a total of 154 breast cancer patients and 142 age-matched controls were enrolled in the study. Sampling was done from two major Hospitals in Hyderabad, Andhra Pradesh (India) between the period 2008 to 2012. Those were Bhagwan Mahavir Hospital and Research Centre, Hyderabad, India and MNJ Cancer Hospital, Hyderabad, India.

Collection of biopsy and blood samples

Tumor breast tissues (biopsies) were collected in normal saline from the pathology lab after diagnosis. The tissues were, immediately transferred and stored at -80°C till further processing was done. The tumor samples obtained were of various tumor sizes and diagnosed mainly as invasive Ductal Carcinoma (IDLS). About 3 ml Blood samples were collected from healthy women (Voluntarily) by venipuncture. These samples were used as controls, in various experiments.

All patients were interviewed for recording their demographic factors like age, BMI, and other details as listed in table 1. Clinical records for ER/PR status were obtained from medical records of the patients. Similarly we could record some demographic parameters of control subjects. Wherever possible, this data was correlated to obtain meaningful information to determine the risk factors of the disease. We also determined the significance of all the parameters for statistical evaluations.

Genomic DNA was isolated by the salting-out method from the tissue samples of the cases and peripheral blood samples of the control group. The quantity of recovered DNA was determined spectrophotometrically. Polymerase Chain Reaction (PCR)-based Restriction Fragment Length Polymorphism (RFLP) was done to identify the Adiponectin 45T/G and 276G/T gene polymorphism, as described previously.

The PCR primer sequences used for 45T/G were 5- GAA GTA GAC TCT GCT GAG ATG G -3 (forward) and 5- TAT CAG TGT AGG AGG TCT GTG ATG -3 (reverse) (Bioserve Biotechnologies, Hyderabad, India). A three-step PCR was standardized using a Biorad system and carried out with an initial denaturation at 95°C for 5 minutes followed by cycling at 95°C for 45 seconds; 60.2°C annealing for 45 seconds, 72°C for 45 seconds extension and a final extension at 72°C for 7 minutes was carried out for about 35 cycles. Amplified PCR products were separated on 2% agarose gel, visualized with ethidium bromide stain. The amplified PCR products were subjected to RFLP using the SmaI (Fermentas, Hanover, MD, USA) restriction enzyme for 37°C overnight for enzyme digestion, and visualized on 3% agarose gel stained with ethidium bromide. Three different combinations of fragment lengths were obtained, The Presence of Hha1 restriction sites which results 182 and 60 bp correspond to samples homozygous wild type, 242 bp representing samples homozygous mutant and a combination of three bands 242, 182 and 60 bp for heterozygous samples (Figure 1). 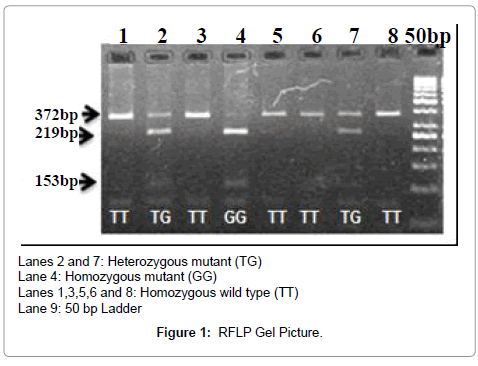 PCR primer sequences used for 276G/T were 5‘- GGC CTC TTT CAT CAC AGA CC (forward) and 5‘- AGA TGC AGC AAA GCC AAA GT -3’ (reverse) (Bioserve Biotechnologies, Hyderabad, India). A three-step PCR was standardized using a Biorad system and carried out with an initial denaturation at 95°C for 5 minutes followed by cycling at 95°C for 60 seconds; 59°C annealing for 45 seconds, 72°C for 45 seconds extension and a final extension at 72°C for 5 minutes was carried out for about 35 cycles. Amplified PCR products were separated on 2% agarose gel, visualized with ethidium bromide stain. The amplified PCR products were subjected to RFLP using the MVA1269I (Fermentas, Hanover, MD, USA) restriction enzyme for 37°C overnight for enzyme digestion, and visualized on 3% agarose gel stained with ethidium bromide. Three different combinations of fragment lengths were obtained, The Presence of MVA1269I restriction sites which results 148 and 48 bp correspond to samples homozygous wild type, 196 bp representing samples homozygous mutant and a combination of three bands 196, 148 and 48 bp for heterozygous samples (Figure 2). 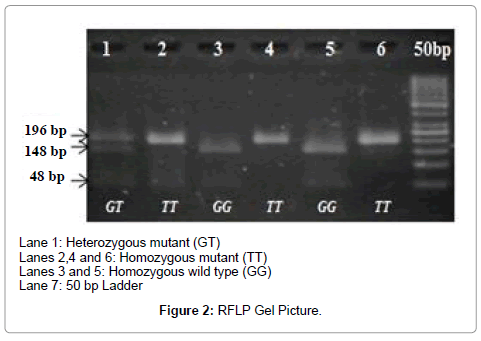 A total of 154 breast cancer patients and 142 age matched controls formed our study group. The distribution of biological characteristics and selected risk factors of the case controls are presented in table 1. The age range for breast cancer patients was 20-70 years. The mean age at which breast cancer was generally identified was 49.87 years. Breast cancer patients were divided into 5 groups according to age at diagnosis; these were 21-30, 31-40, 41-50, 51-60 and 61-70 years. Incidence of breast cancer cases and a control group was higher in the age groups 41-50 (32.4% and 28.2%) years when compared to other age groups, and the incidence was very low in the age group 61-70 years. The frequency of overweight and obese patients (25.9%, and 54.5%) and control (35.2%, 53.5%) showed a high Body Mass Index (BMI). Age at menarche of BC patients showed that about 54.5% of them had attained menarche between 13 -14 years, while 18% attained it by 15-16 years. This is similar to what was observed in the normal population. Depending on the menopausal status, breast cancer patients and controls were also categorized into premenopausal (48% and 57.8%). and postmenopausal groups (52% and 42.2%). It was observed the majority of sporadic breast cancer cases were higher in postmenopausal group when compared to premenopausal group.

Table 4: Combined effect of both +45T/G and 276G/T Polymorphism in obese breast cancer cases and controls.

The World Health Organization declared obesity as one of the greatest public health challenges of the 21st century and projects that by 2015; more than 700 million adults will be obese. Obesity is on the rise and is associated with increased risk and progression of a number of cancers including colon, prostate, breast, and liver cancers. It has been well known that obesity is one of the major risks for breast cancer. The prevailing theory behind the association between obesity and breast cancer is based on the increased levels of estrogens observed in obese women [6]. As obesity has been associated with the development of breast cancer, adipocytokines, a group of polypeptide growth factors and cytokines which are produced exclusively by adipose tissue, may underlie the association between obesity and breast cancer risk. Understanding of the adiponectin hormone plays an important role in obesity-related cancer, including breast cancer.

Adiponectin is secreted by adipose tissue and its levels were inversely correlated with Body Mass Index. In the present study overweight and BMI and overweight cases are significantly associated with +45T/G and G276T genotype, suggesting that ADIPOQ gene polymorphism may contribute to weight gain and lead to breast cancer risk. In 2002 Menzaghi et al. observed that the +45 T/G and +276 G/T polymorphisms of the adiponectin gene contribute to weight gain and the development of insulin resistance [20]. Further we analyzed the association of menopausal status with TG genotype; we found that the frequency of TG genotype is significantly associated with premenopausal women, suggesting that weight gain in the later premenopausal years may lead to greater risk of breast cancer. Hormones play a critical role in breast carcinogenesis, determining the associations between hormone levels and breast cancer risk may provide insight into the etiology of this disease and may help identify women who are at high risk.

The present study investigated the association between +45T/G and 276G/T polymorphisms in the adiponectin gene and breast cancer in a South Indian population. Our results demonstrated that the presence of the TG genotype at the position +45 and GT genotype at the position 276 of the adiponectin gene may be associated with the risk of breast cancer. Further studies are needed to explore the complicated interaction between environmental factors and ADIPOQ gene polymorphisms in terms of susceptibility to breast cancer. To the best of our knowledge, ours is the first study to provide information on the role of ADIPOQ +45G/A polymorphism in breast cancer risk in South Indian women.

We are very much grateful to all the volunteers and patients who cooperated with us in conducting this study. We thank Bhagwan Mahavir Medical Research Center for the facilities provided.