Copyright: © 2013 Saleem W, et al. This is an open-access article distributed under the terms of the Creative Commons Attribution License, which permits unrestricted use, distribution, and reproduction in any medium, provided the original author and source are credited.

Here, we present results from two independent studies carried out using Neuromolecular Imaging (NMI) with miniature BRODERICK PROBE ® biosensors. In the first study, we imaged neurotransmitters and neurochemicals in human epilepsy patients intraoperatively during early and late neurodegeneration. In the second study, we imaged neurotransmitters and neurochemicals in an experimental murine model using animals with and without neurodegeneration caused by Parkinson’s disease (PD). We compared our results derived from animals with lesioned group (PD) with non-lesioned group (non-PD), using the same in vivo NMI paradigm. NMI biotechnology enabled neurotransmitters, neuropeptides and neurochemical imaging of dopamine (DA), serotonin (5-HT), homovanillic acid (HVA), L-tryptophan (L-TP), dynorphin A (DYN A) and somatostatin (SRIF). Each neurotransmitter and neurochemical was imaged at its respective signature i.e., its electroactive oxidation/half-wave potential. Results showed neuropeptide signatures of DYN A and SRIF as common biomarker molecules following late neurodegeneration in epilepsy patients and in PD animal models. Placing these two studies together allowed us to us to provide a new hypothesis about a possible biomarker link between the two neurodegenerative diseases, epilepsy and PD. Interestingly, this biomarker link, to our knowledge has not been observed previously. These findings will provide new strategies for better diagnoses, detection of and protection against epilepsy and Parkinson’s disease

Parkinson’s disease (PD) is the second most common progressive neurodegenerative disease in America [2]. It is characterized by the formation of Lewy bodies and Lewy neurites in dopaminergic (DA) neurons of substantia nigra pars compacta (SNpc) of brain. Symptoms include progressive impaired movement as (a) uncontrollable resting tremors (b) bradykinesia, (c) muscle rigidity and (d) postural instability. Consistent loss of DA neurons results in the depletion of dopamine level of brainstem and striatal projections, involved in motor function of CNS.

Several animal model studies have been conducted to provide further insight into PD and its therapies. However, more experimental approaches are required to elucidate the precise mechanism of action of PD involved with DA neurons in nigrostriatal pathways. One of the major obstacles in the human studies of PD is that brain materials from early or untreated PD patients are unavailable. In addition, there are minimal amounts of animal studies with few published reports to date about in vivo dynamic release of neurotransmitters, neurochemicals and/or neuropeptides in PD animals. Neuromolecular Imaging (NMI) is the first in vivo, real time imaging technique using BRODERICK PROBE® biosensor to image concentrations of different critical neurotransmitters involved in stroke, epilepsy and Parkinson’s disease.

Here, we present studies that are primarily focusing over the real time changes associated with brains following neuro-degeneration in human epilepsy patients (early v/s late neurodegeneration) and PD v/s non-PD animal models. We are the first to demonstrate appearance of neuropeptides as hallmark of neurodegeneration and related biomarkers for epilepsy and PD.

Figure 1 illustrates the NMI setup using BRODERICK PROBE® biosensor: These biosensors have been tested in controlled studies and details of NMI biotechnology and circuitry are already published [3-13]. NMI works on utilizing electron transfer kinetics by selecting an image of a specific neurochemical or neurotransmitter molecule at an electroactive oxidation/half wave potential. Specific biosensor properties such as hydrophobicity, hydrophilicity, side chains of amino acids of biosensor formulation determine current derived from electron transfer kinetics upon interaction with specific neurotransmitters and neuropeptides. The electroactive signature for each molecule is detected by a detector/potentiostat in subunits of volts and amperes, depending upon the type of electronic circuitry chosen in the potentiostat for a particular study. Potentiostat is connected to an external chart recorder to record signals obtained in form of signature oxidation/half wave potential. For both circuitry i.e., linear or semi-differential/semiderivative, x-axis represents voltage in millivolts and y-axis represents current in microamperes. 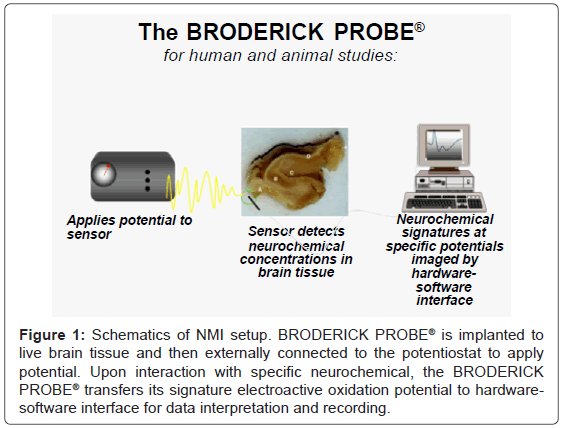 Figure 1: Schematics of NMI setup. BRODERICK PROBE® is implanted to live brain tissue and then externally connected to the potentiostat to apply potential. Upon interaction with specific neurochemical, the BRODERICK PROBE® transfers its signature electroactive oxidation potential to hardwaresoftware interface for data interpretation and recording.

In vivo studies of brain neurotransmitters based on electrochemistry have been in progress [14-16] and advancements have been made in voltammetry and microvoltammetry using carbon fiber electrodes [17,18]. The basic electrochemical principles of voltammetry are listed below:

• To measure the current as a function of applied voltage, when an electroactive species undergo redox reaction at a characteristic redox potential.

• Current produced by specific redox reaction is directly proportional to concentration of neurotransmitter, given by the Cottrell equation described below:

Conventional voltammetry and microvoltammetry methods since 1970’s have validated that the flow of charge (current in amperes) through the surface of indicator is directly proportional to concentration of electroactive species. Relationship in term of charge, current, concentration of electroactive species, time, diffusion layer, size of indicator electrode, electron transfer and Faraday’s constant are described below in term of derived equations:

V=volume of the diffusion layer on the electrode of measurement

NMI, based on electrochemical principles, has made major advances in the field of nanobiotechnology, science and medicine. For example, one of these cutting-edge advancements made by NMI and the BRODERICK PROBE® is in the field of human epilepsy intraoperatively in NYU Tisch Hospital with Institutional Review Board (IRB) approval (Figure 2). 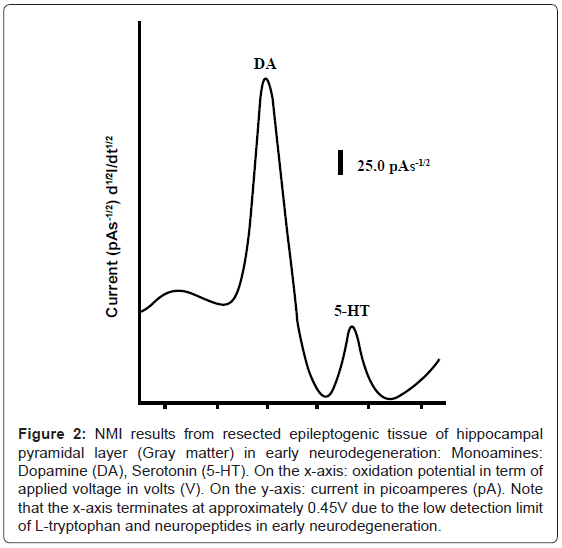 Figure 2: NMI results from resected epileptogenic tissue of hippocampal pyramidal layer (Gray matter) in early neurodegeneration: Monoamines: Dopamine (DA), Serotonin (5-HT). On the x-axis: oxidation potential in term of applied voltage in volts (V). On the y-axis: current in picoamperes (pA). Note that the x-axis terminates at approximately 0.45V due to the low detection limit of L-tryptophan and neuropeptides in early neurodegeneration.

Studies in real time with NMI and BRODERICK PROBE® biosensors begin with electroencephalographic (EEG) monitoring wherein the site of cortical resection is defined with subdural grid epilepsy electrodes which are placed on the surface of the brain and epilepsy strip electrodes are placed subtemporally.

Then, BRODERICK PROBE® biosensors, with a diameter over five times smaller than epilepsy depth electrodes for invasive EEG, are placed by direct visualization in the exposed cortical region with and without epileptic spike activity in regions destined for resection.

A classical animal model of PD was used to study endogenous brain mechanisms of PD in Sprague-Dawley rat (Rattus norvegicus). Depletion of DA was produced by injecting the neurotoxin, 6-hydoxydopamine (6-OHDA) into substantia nigra (SN) of male, Sprague-Dawley Rattus norvegicus in Charles River Laboratories, North Carolina, USA. This leads to the death of lesioned DA neurons and subsequently to disruption in dorsal striatum (DStr) and hence depletion of DA in DStr. The lesion was made in the substantia nigra (SN) of rats under anesthesia. Stereotaxic coordinates were AP=-1.5, ML=+1.8, DV=7.5 [19].

Another group of animals, same weight (approx. 300 grams) and age, did not undergo surgery for lesions in SN. These were the controls or non lesioned groups (Non-PD).

For NMI studies, BRODERICK PROBE® biosensors were implanted in both PD (lesioned) and non-PD (non-lesioned) animals in DStr under sodium pentobarbital anesthesia (50 mg/kg ip) [20]. Protocols for NMI studies with PD and non-PD were performed at Dr. Broderick’s laboratory with approval from the Institutional Animal Care and Use Committee (IACUC). These studies were performed to compare endogenous neurochemical profiles of PD and non-PD animal model.

Clinical studies with epilepsy patient, in situ and in vivo

During early neurodegeneration, monoamines are predominant in resected epileptogenic tissue of brain (Gray matter) as evident from NMI results from the BRODERICK PROBE® biosensor. Results showed a relatively high concentration of DA compared to 5-HT were present in patient’s hippocampal pyramidal layer of brain. Lauric acid is a saturated fatty acid with a 12-carbon atom chain. It has a hydrophobic head with hydrophilic tail which helps to act as a surfactant to reduce surface tension. This surfactant also acts to assist the migration of molecules to form an oriented, adsorbed film on the interfacial surface of the indicator sensor. 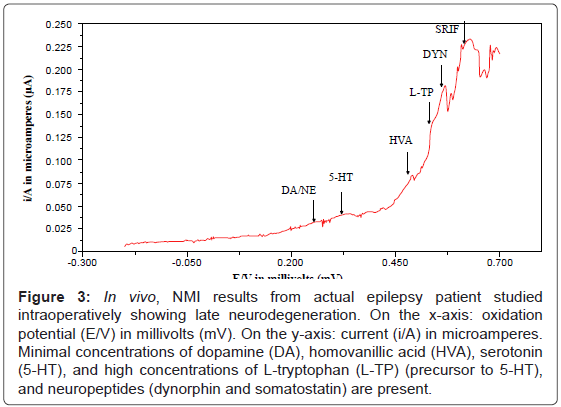 Intraoperative images were verified by comparison with a fourteen year empirical database on epilepsy. Table 1 represents preliminary data of detection limits for different compounds that were studied intraoperatively using the NMI biotechnology.

Figure 4 depicts an abundant presence of neurotransmitter peptides, neuropeptides and a lower concentration of the indoleamine, 5-HT, while DA, expectedly, was not imaged in any PD animal model. Meanwhile, the non-lesioned group in figure 5 exhibited significant concentrations of monoamines, DA and 5-HT while neuropeptides were not observed in any non-PD animal model. 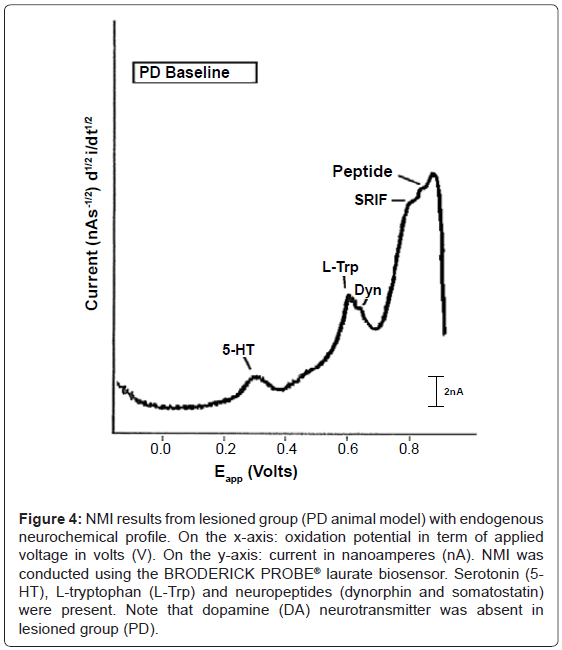 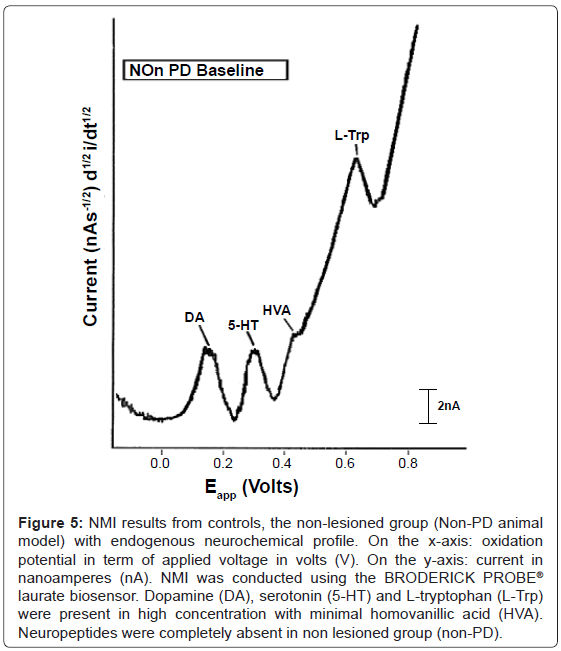 This work represents a contribution by the senior author, Dr. Patricia A. Broderick, as invited speaker at The International Congress and Exhibition on Biosensors & Bioelectronics May 13-17th, 2012, Las Vegas, Nevada, USA. The Conference was sponsored by OMICS group. This work was also presented in poster form at the Institute of Electrical and Electronics Engineers (IEEE) Conference at the City College of New York (CCNY) sponsored by the Department of Biomedical Engineering at the Grove School of Engineering, CCNY, in concert with the NYU Polytechnic Institute.

Waqas Saleem, B.S. is a candidate for the Master’s Degree in Biology, CCNY, CUNY. Waqas is performing research in Dr. Broderick’s laboratory in the Department of Physiology, Pharmacology and Neuroscience at the Sophie Davis School of Biomedical Education, CCNY, CUNY.