Copyright: © 2012 Vinoth R, et al. This is an open-access article distributed under the terms of the Creative Commons Attribution License, which permits unrestricted use, distribution, and reproduction in any medium, provided the original author and source are credited.

A general type of molecular level metabolic control that is common to all living organisms is the feedback inhibition, wherein an increase in the product of a metabolic pathway regulates an enzyme upstream in the cascade by binding to it and decreasing enzyme activity. The de novo pyrimidine biosynthetic pathway provides a specific example for the feedback inhibition. Aspartate transcarbamoylase (ATCase) catalyzes the first step in the biosynthesis of pyrimidines and one of the best understood allosteric enzymes. The structure of ATCase is roughly triangular in shape, similar to the symbol of an op-amp IC. Since most of the enzymatic properties were analogous to the properties of IC, this inspired us to mimic the enzyme (EC 2.1.3.2) with an IC (PIN μ A741CN) in our circuit design. The Michaelis-Menten model, Lineweaver-Burk equation and the equation for the non-inverting amplifier were theoretically related and used for our model. As a result, an electronic feedback circuit was designed and tested. The biomolecular mimic circuit will develop a new level of understanding of the metabolic complexity in the cell.

The metabolic and physiological processes of living cells are regulated in a variety of ways. In general, regulatory biochemical mechanisms respond to change by damping the effect (of course, there are situations where amplification occurs). In each biochemical pathway there are one or more enzymatic “nanomachines” whose catalytic activity can be modulated in response to cellular needs. This gives the cell very great control over metabolism and utilization of energy resources [1]. Such regulatory enzymes usually catalyze the first unique (or “committed”) step in a pathway. It should be noted that the control of metabolic processes is complex. Cells use allosteric regulation to respond effectively to certain changes in the intracellular conditions. The binding of an effector to an allosteric enzyme can either increase or decrease the binding affinity of substrate to that enzyme.

The de novo pyrimidine biosynthetic pathway provides a specific example of feedback inhibition. There are about seven different enzymatic nanomachines on the molecular assembly line [2]. Escherichia coli aspartate transcarbamoylase (ATCase, EC 2.1.3.2) is a choice object of investigation on regulatory mechanisms, cooperativity and intramolecular signal transmission. This reaction proceeds through an ordered mechanism in which carbamoyl phosphate binds first, inducing a local conformational change of ATCase which, then, allows the binding of the second substrate aspartate [3,4] to generate N-carbamoyl-L-aspartate with the release of inorganic phosphate [5]. On a mechanistic level, inhibition of a key enzymatic nanomachine (ATCase) on the assembly line results by a feedback mechanism, the physical association of the end product (Cytidine triphosphate, CTP) with the first enzyme in its “fabrication process”. On the contrary it is stimulated by Adenosine triphosphate (ATP). This antagonism contributes to ensure the intracellular balance of purine and pyrimidine nucleotides for DNA synthesis in the cell [6]. The bacterial ATCase controls the rate of pyrimidine metabolism by homotropic and heterotropic interactions [7]. Substrates bind to the enzyme and induce a tertiary domain closure that triggers a quaternary conformational change resulting in the observed homotropic cooperativity [8]. CTP and ATP are the end products of the pyrimidine and purine nucleotide biosynthetic pathways, respectively, can inhibit/activate the enzyme heterotropically [9-11]. ATCase molecule consists of six catalytic subunits and six regulatory subunits C6R6. The catalytic subunits bind the substrate molecules, and the allosteric subunits bind the allosteric inhibitor, CTP. The entire ATCase molecule exists in two conformations, active and inactive. These forms are referred as the T (for taut/tense) state and the R (for relaxed) state, respectively [12]. The T state has lower affinity for substrates and, hence, lower catalytic activity than does the R state. In the presence of any fixed concentration of aspartate and carbamoyl phosphate, the enzyme exists in equilibrium between the T and the R forms. When CTP is not bound to the regulatory subunits, the enzyme is maximally active. As CTP accumulates and binds to the regulatory subunits, they shift the equilibrium toward the T state, decreasing the net enzyme activity and reducing the rate of N-carbamoylaspartate generation [13]. This mechanism for allosteric regulation is referred to as the concerted mechanism because the change in the enzyme is “all or none”. An increase in substrate concentration favors the entire enzyme converted from T state to the R, affecting all of the catalytic sites equally [12,14]. The main aim of our work is to mimic this biochemical feedback mechanism and design an equivalent electronic circuit to develop a new level of understanding of the metabolic complexity of the cell.

ATCase is the key enzyme (EC 2.1.3.2) catalyzes the first step in the pyrimidine biosynthetic pathway. ATCase is a multi-subunit protein complex composed of 12 integrated chains or subunits (300 kDa in total) and the overall structure is roughly triangular in shape that is similar to the symbol of an operational amplifier (op-amp) integrated circuit (IC) which is composed of transistors rather than subunits [15]. This inspired us to mimic the enzyme with an IC (PIN μA741CN) in our circuit design (Figure 1). The operating temperature of this IC is between -55 and +125 °C [16]. Two theoretical models that attempt to explain the behavior of allosteric enzymes are the concerted model and the sequential model. The former was introduced by Monod, Wyman and Changeux, referred as the MWC hypothesis [17] and the latter was introduced by Koshland, Nemethy and Filmer and is often called the KNF hypothesis [18]. Since the former model accounts only for positive cooperativity, it was mimicked by using non-Inverting amplifier (i.e., the input was connected to the non-inverting pin (+) and the inverting pin (-) of the amplifier was grounded). In the former model, it is assumed that the enzyme exists in only two states: T(aut) and R(elaxed) with different KMs. Similarly, the op-amp has two regions i.e., linear and saturation regions. Hence, different resistors were used to indicate different KMs.

Although Michaelis-Menten (MM) model [19] was not applicable to allosteric enzymes, the series of reactions were hypothesized by using a similar substrate-reaction model i.e., an enzyme (E) combines with a substrate (S) to form an enzyme-substrate (ES) complex, which can proceed to form a product (P). Only the forward reaction of MM model is mimicked to make our theoretical model. In which, ‘E’ is the gain (A), obtained using different resistors, ‘S’ is the input voltage (Vi), ‘ES’ is the product of gain and input voltages (AVi) and ‘P’ is the output voltage (V0) obtained by using superposition theorem [20]. k1 and k2 are the rate constants for the individual steps differentiated with resistor values (R1 & R2).

As enzyme-catalysed reactions are saturable (similar to op-amp IC), their rate of catalysis does not show a linear response to increasing substrate. If the substrate concentration [S], gets higher, the enzyme becomes saturated with substrate and the rate reaches Vmax, (the enzyme’s maximum rate) which is approximately equals to op-amp IC supply voltage (Vcc). The rate (V0) of formation of product is given by the MM equation:

Similarly, the equation for the non-inverting amplifier (Figure 2) is given as 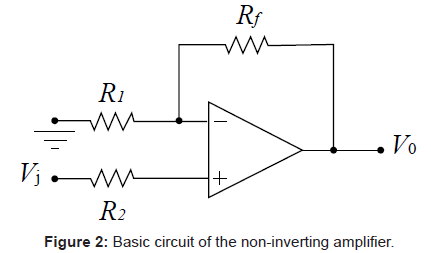 The same equation (4) can be rearranged as

Where Vi is the input voltage. R1 is resistance and Rf is the feedback resistor which provides feedback voltage. V0 is the output voltage. The LB equation Equation (3) and the equation for the non-inverting amplifier Equation (5) were theoretically related and used for our model. The working principles for two different conditions are given below.

The de novo pyrimidine biosynthetic pathway was conceptually mimicked with electronic components. As a result, an electronic feedback circuit was designed and tested. The structure of the pacemaker enzyme, ATCase, is roughly triangular in shape which is similar to the symbol of an op-amp IC (Figure 1). This inspired us to mimic the enzyme (EC 2.1.3.2) with an IC (PIN: μA741CN) in our circuit design. Since most of the enzymatic properties were analogous with the properties of IC, the successive enzymatic nanomachines were also mimicked with op-amp IC (Figure 4). 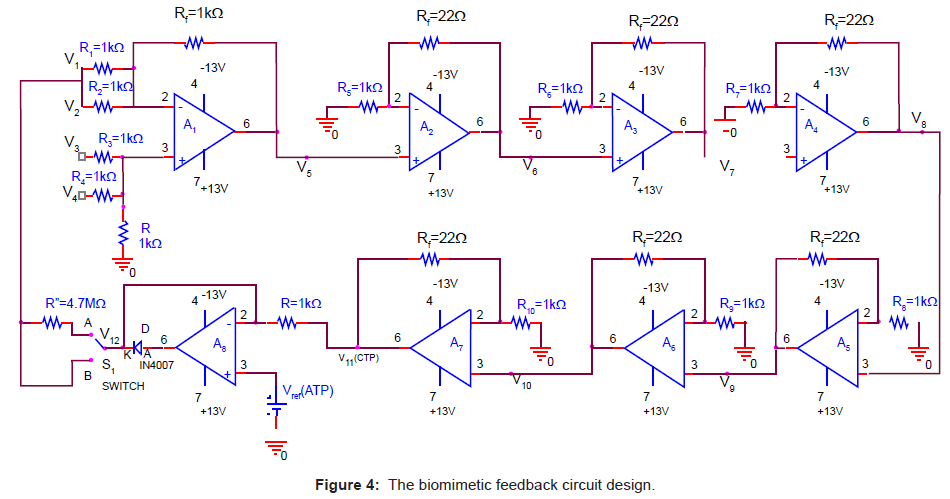 The operation of the circuit is described under three conditions, case 0, 1 and 2, respectively (as mentioned in section 2.4). Case 0 mimics the enzymes in normal condition. The substrates, carbamoyl phosphate and aspartate were mimicked by the input voltage (0.378 V) to the noninverting terminal (V3 and V4). The final output, 0.852 V (V11) was considered as the end product (CTP). Case 1 mimics the situation in which CTP (V11) is produced more (0.852 V) than the external voltage Vref(0.800 V), where Vref mimics the heterotropic activator (ATP). As a result, all the corresponding outputs of op-amps were negative. This indicates that the enzyme ATCase is inhibited by CTP, which shifts the equilibrium towards the T state, decreasing the net enzyme activity. In case 2, ATP (Vref) is 0.900 V and hence all the corresponding outputs of op-amps were positive. This indicates a steep rise in activity. This mimics the positive cooperativity of ATCase. The outputs of op-amps observed under different conditions are given in Table 1.

Table 1: The output voltage from op-amps of the tested electronic feedback circuit is given for each case.

The pacemaker circuit is modeled with R3 & R4 as 1 KΩ is depicted in Figure 5. The input voltages (V1=V2=0) and the corresponding V3 & V4 is showed in Table 2. The allosteric inhibitor, CTP was mimicked by R3 & R4 as 3.3KΩ, whereas the heterotropic activator, ATP was mimicked by R3 & R4 as 560Ω. The output (V5) of the modeled pacemaker circuit is showed in Table 2 for the three sets of R3 & R4 values. The pacemaker enzyme ATCase does not conform to Michaelis-Menton kinetics, have multiple active sites. These active sites display cooperativity, as evidenced by a sigmoidal dependence of reaction velocity on substrate concentration [14]. 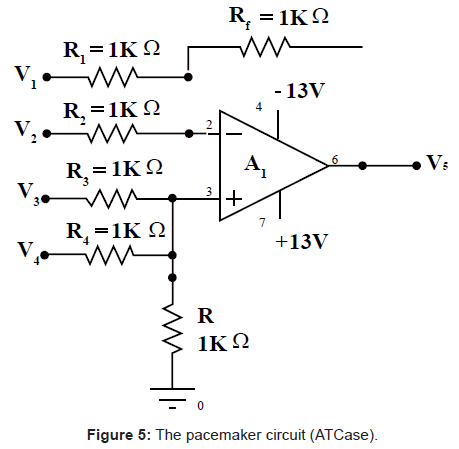 Our findings on the output of pacemaker circuit showed strikingly a sigmoidal plot based on the input voltage (Figure 6). The generated sigmoidal curve for the allosteric enzyme can be considered as a mixture of two Michaelis-Menten enzymes, one with a high value of KM that corresponds to the T state (ATP) and another with a low value of KM that corresponds to the R state (CTP) [14]. Ironically, the case was upside down with the mimic circuit, an indirect proportion between KM and R was observed. A higher resistance (R3 & R4 = 3.3KΩ) corresponds to CTP and lower resistance (R3 & R4 = 560Ω) corresponds to ATP. 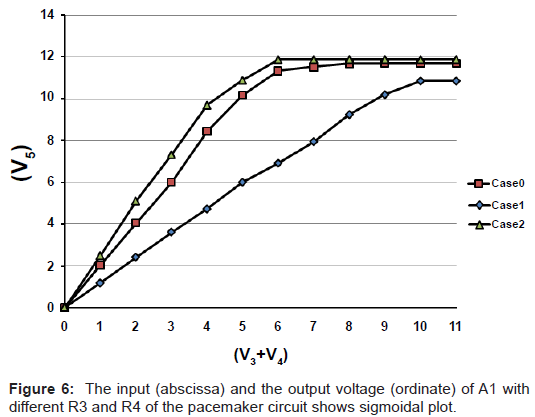 Figure 6: The input (abscissa) and the output voltage (ordinate) of A1 with different R3 and R4 of the pacemaker circuit shows sigmoidal plot.

The designed circuit can be used to model the bioprocess and its regulation on metabolite production. It can also be used to analyze metabolic fluxes and their control. The analysis does not require knowledge of metabolite concentration or details of the enzyme kinetics of the system. The assumption is made that the given input voltage undergoes amplification at each stage. The output of each stage from non-inverting amplifier can be tapped out for the analysis. Once it reaches the desired threshold, feedback inhibition occurs through precision clamp (precision threshold detector). Then the pacemaker circuit functions as an adder/subtractor to regulate the output. The biomolecular mimetic approach can also be used as a central controlling circuitry in various industrial applications due to the difference in voltage tapings [25]. The pacemaker circuit may act as a control valve to alter the simulated flux of small molecules through the metabolic pathway. The designed electronic circuit will develop a new level of understanding of the metabolic complexity in the cell.