Close to 50 % of anionic surfactants at Enaspol a. s., a chemical company with longtime tradition in research and production of surfactants, construction chemicals and textile auxiliaries, were removed from waste water using the Advanced Oxidation Method, H2O2/Ultra-Violet Radiation waste water pre-treatment method. The optimum concentration of hydrogen peroxide was found to be 1.0 g/L H2O2 in waste water. Above this concentration, the excess hydrogen peroxide reacts with other contaminants, such as elemental sulfur in the waste water producing complex oxidizable material. The optimum time to remove maximum amounts of surfactants (42.50 %) was found to be three hours. Beyond three hours the efficiency of this method is reduced. The reduction of chemical oxygen demand shows a rather interesting pattern; there was an increase in removal of COD from 0 to 1.0 g/L H2O2 in waste water and from 1.0 g/L H2O2 there was a decrease in the reduction efficiency of COD by this method in waste water. This shows that excess H2O2 is reacting with other non-organic species such as sulphur in waste water to produce extra oxidizable material which contribute to the COD value.

Four methods can be employed to achieve this: coagulation [1], adsorption [2], reverse osmosis [3] and chemical pre-treatment [4]. The problem with reverse osmosis is that even though it can remove as many contaminants as possible it is costly both to install and to run [5]. There are different kinds of chemical water pre-treatment methods used depending on the types of contaminants. For these kinds of contaminants, Advanced Oxidation Processes (AOPs) are proposed. The main function of AOP is the generation of highly reactive free radicals more especially the hydroxyl radical (HO.). Hydroxyl radicals are effective in destroying organic chemicals because they react rapidly and non-selectively with nearly all electron rich organic compounds such as dyes, oils and surfactants [4].

There are three popular AOP processes used in industry for pretreatment of waste water overlain with organic contaminants: Titanium dioxide/Ultraviolet light (TiO2/UV), Hydrogen Peroxide/Ultraviolet light (H2O2/UV) and Fenton’s reaction that is Ferrous ion/hydrogen Peroxide (Fe2+/H2O2) methods. The efficiency of these methods is in their ability to produce hydroxyl radicals which scavenge organic compounds in waste water [4].

In the Titanium Dioxide/UV Light Process, during UV irradiation of TiO2, conduction band electrons (ecb) and valence band holes (h+) are initially yielded. Band electrons interact with molecular oxygen producing superoxide radical anions. On the other hand band holes react with water molecules to yield hydroxyl radicals [5]. The advantage of this method is that the reaction takes place at ambient conditions. Titanium Dioxide act in this case as a catalyst which means it can be reused making the process cheaper. This method is capable of oxidizing a wide range of organic compounds into harmless compounds such as carbon dioxide and water [6]. On the other hand there is a need for uniform irradiation of UV light on the catalyst for the method to work. This means that the reactor should be designed in such a way that this is achieved. Waste water with other anionic species will also affect the degradation process as UV light will be absorbed by these competing species. These species will also compete with organic pollutants for the hydroxyl radicals. This is desirable in this case because there will be a reduction in Chemical Oxygen Demand (COD) concentration.

The Hydrogen Peroxide/UV Light Process involves the cleavage of oxygen-oxygen bonds in hydrogen peroxide by ultraviolet radiation to produce hydroxyl radicals [6]. The efficiency and advantages of this method are similar to that of the TiO2/UV light method since H2O2 is a cheap chemical and is readily available in the market. The only drawback with this method is that H2O2 has a poor UV light absorption characteristics. Therefore if water matrix will absorb a lot of UV light energy, most of the light input will be wasted.

The Fenton’s reactions (Fe2+/H2O2 process), offers the same kinds of advantages as the first two methods. In addition, the requirement for special kind of light (UV) is removed which means that the cost is further reduced. The disadvantage of this method is that it works better in acidic solutions. The addition of ferrous ions to the waste water may prove to add some more unwanted material hence it is highly discouraged as a pre-treatment method.

In ENASPOLA.S. “A chemical company with longtime tradition in research and production of surfactants, construction chemicals (mainly concrete plasticizers) and textile auxiliaries”, the waste water from the production plant is generated from a large number of raw materials and finished products; this is mainly due to dripping, steaming of filling hoses or by machinery wash outs. The industrial sectors such as Enaspol a. s. which produces biodegradable industrial waste water not entering urban waste water treatment plants before discharge to receiving waters should be subject to appropriate requirements and legislation. These contaminated waters are accumulated in a basin (holding tank of about 200 m3) and then pumped over to the Biological Waste Water Treatment Plant (BWWTP), where biological decomposition of the waste contained in the waste water takes place (Metcalf and Eddy INC., 1972). After biological treatment, the water is discharged into the nearby river. Enaspol a. s. is allowed by the Czech government to discharge waste water containing a maximum of 4 mg/L of surfactants and maximum of 200 mg/L chemical oxygen demand (COD).

Currently the holding tank contains waste water with approximately 1358 mg/L of anionic surfactants and approximately 9558 mg/L COD raising the pH of the water to about 10.30 (Enaspol June 2011 quality control results); this means that the waste water reaching BWWTP is overlain with these biodegradable contaminants. Therefore more time should be allowed for biological decomposition of waste water to reach the allowed limits or worse still the water should be diluted before draining to the BWWTP. This means that discharge of waste water from the plant to the holding tank and hence to the BWWTP should be delayed. This has an effect on production as delay in waste water treatment means delay in production. The other problem is that with high load of contaminants in the BWWTP there is a high possibility of contaminants leaving BWWTP into the river. The only feasible solution is to reduce the burden in the waste waters in the holding tank prior to their transfer to the BWWTP. The aim of this study was to optimize the Hydrogen Peroxide/UV Light waste water treatment process for the treatment of anionic surfactant contaminated waste water at Enaspol A. S., thereby reducing COD concentration in the wastewater prior to discharge in the BWWTP.

The aims of this study are to optimize the concentration of H2O2 and residence time of the system for this process to be effective.

As noted earlier hydrogen peroxide has poor ultra violet light absorbance characteristics. Again if more H2O2 reaches the BWWTP tank it might affect the efficiency of the micro-organisms there [7,8]. This might not be the case for this system since there is aeration in the BWWTP which might decompose the hydrogen peroxide. Therefore there is need to investigate the optimum concentration of H2O2 for the Enaspol system.

Residence time for the system

The surfactants contaminated waste water was collected from the 200 m3 Enaspol a. s. waste water holding tank. The water was stirred during sampling to get a homogenous sample. The samples were taken to the laboratory in sealed plastic containers in a cooler box with ice cubes to minimise auto-degradation. Samples were used and analysed immediately in triplicates upon reaching the laboratory. A fresh sample of about one litre was obtained each time an experiment was done. A commercially available 30 V GPH212 Germicidal Ultra-Violet lamp was used as a UV light source. The initial pH of the sample was determined by a Mettler Toledo multi-parameter bench meter equipped with a pH probe, the COD and anionic surfactant concentrations were determined following standard methods for the examination of water and wastewater [9,10].

A laboratory reactor was designed by a schematic diagram (Figure 1). The reactor is a closed metal box equipped with a magnetic stirring hot plate. Surfactant contaminated waste water (400 mL) was put into a 500 mL beaker and continuously stirred throughout the entire length of the experiment (Figure 2). The reactor was closed and all holes sealed with an opaque tape throughout the experiment to keep sunlight away. Figure 2: Picture of the reactor (open) during waste water pre-treatment.

Six solutions of different H2O2 concentration in waste water were prepared in triplicates: 0.5 g/L, 1.0 g/L, 2.0 g/L, 3.0 g/L, 4.0 g/L, and 5.0 g/L. The solutions were transferred into 500 mL beakers. The solutions were homogenised by continuous stirring with a magnetic stirrer throughout the trials. A 30 V Ultraviolet Lamp was switched on and the reaction was monitored for one hour. After one hour, the solutions were measured for COD and anionic surfactants content [9,10].

Investigation of optimal time for pre-treatment

For the investigation of the optimal time for pre-treatment of the waste water, the same procedure was performed as above; in this case, the concentration of H2O2 was kept constant at 1.0 g/L of H2O2 in waste water and the reaction time was varied from 1 hour to 4 hours at 1 hour intervals. After each hour samples were taken to the quality control laboratory for COD and anionic surfactants analysis. 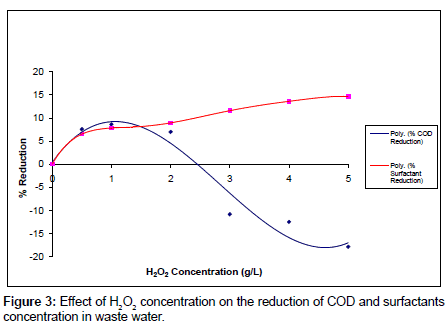 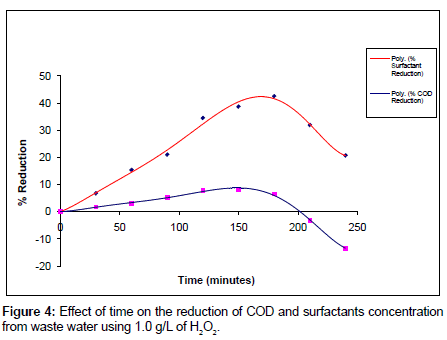 Figure 4: Effect of time on the reduction of COD and surfactants concentration from waste water using 1.0 g/L of H2O2.

This shows that excess H2O2 is reacting with other non-organic species in waste water to produce extra oxidizable material which contribute to the COD value. This is expected since elemental sulphur is one of the major reactants for the system. It is expected that oxidation of elemental sulphur will produce SOx species [9]. The results showed that the optimum concentration of H2O2 for the reduction of COD in Enaspol a. s. waste water was 1.0 g/L H2O2 in waste water.

Table 2: Effect of time on the reduction of COD and surfactants concentration from waste water using 0.5 and 1.0 g/L of H2O2.

On the other hand this method is found to have little effect on the reduction of total oxidisable species in the waste water. This means that Enaspol a. s. waste water contain in addition to surfactants, oxidisable inorganic species which contribute a great deal to the chemical oxygen demand of the waste water. This is expected since Enaspol a. s. produces other products which require other types of formulations different from those for producing surfactants. For increased efficiency of the system, there is need to determine the identity of other oxidisable species in the waste water.

The authors wish to thank the Organization for the Prohibition of Chemical Weapons (OPCW) and Enaspol a. s. management for financial and technical assistance rendered towards this project.

Copyright: © 2013 Paphane BD, et al. This is an open-access article distributed under the terms of the Creative Commons Attribution License, which permits unrestricted use, distribution, and reproduction in any medium, provided the original author and source are credited.