Copyright: © 2013 Z. Hugh Fan. This is an open-access article distributed under the terms of the Creative Commons Attribution License, which permits unrestricted use, distribution, and reproduction in any medium, provided the original author and source are credited.

A chemical sensor, defined by the International Union of Pure and Applied Chemistry (IUPAC), “is a device that transforms chemical information, ranging from the concentration of a specific sample component to total composition analysis, into an analytically useful signal”. The chemical information may originate from a chemical reaction of the analyte or from a physical property of the system investigated [1].

IUPAC further states biosensors “may be regarded as a subgroup of the chemical ones” because “the process on which they are based is, in general, common to chemical sensors”. They may be also differentiated according to the biological elements used in the receptor, including organisms, tissues, cells, organelles, membranes, enzymes, antibodies, etc [1].

Miniaturized Total chemical Analysis System (μTAS) was proposed as an alternative to chemical sensors in 1990 [2]. It was driven by the question: why cannot a chemical sensor compete with bench-top instruments in terms of specificity and accuracy (especially when the sample matrix is complicated). To answer the question, let’s look into the operational steps of typical chemical analysis. They include sampling in the real world, sample pretreatment after being transported into a lab (e.g. dilution and/or derivatization), separation (e.g. chromatography), measurement, and data analysis and interpretation, as shown in the figure 1 [2]. The steps like derivatization or separation reduce the selectivity demand of a detector since most of the interfering species have been eliminated. In contrast, chemical sensor performs the recognition/measurement step only though some sensors carry out some degrees of separation by incorporating a membrane or the like to allow certain molecules to permeate toward the sensor receptor. As a result, chemical sensors cannot compete with laboratory bench-top instruments due to their inherent disadvantages. 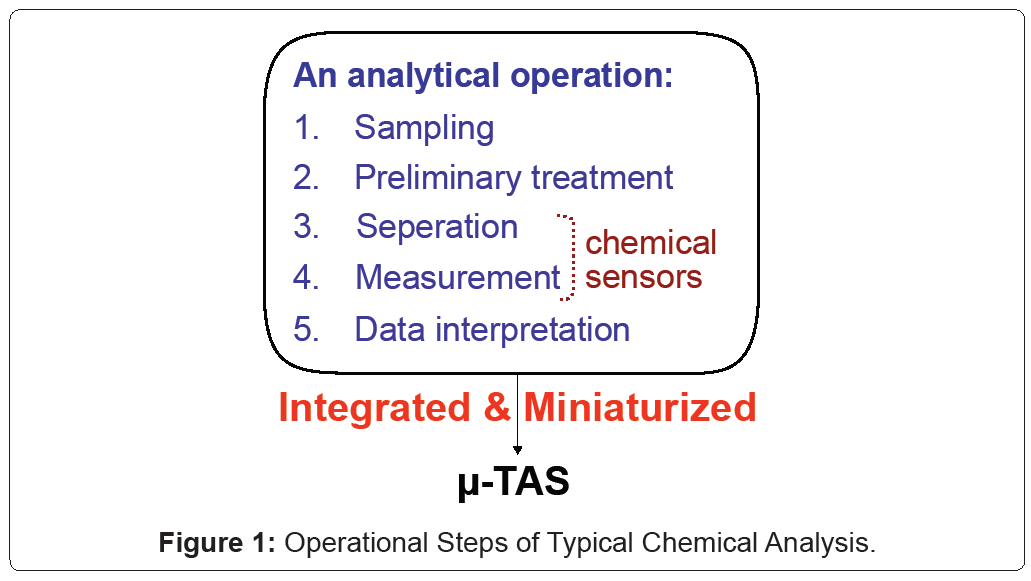 If all sample handling and measurement steps in an analytical operation are integrated into a system with extensive automation and the system is further miniaturized into the size of a chemical sensor, we will have a miniaturized total chemical analysis system (μTAS) that functions like a chemical sensor in terms of size and operation and like a bench-top instrument in terms of specificity and performance. The holy grail of μTAS is to shrink a lab onto a device in the size of a computer chip, i.e., lab-on-a-chip. In analogy to shrinking a computer from the size of a room in the 1950s to a laptop today, instruments for chemical and biological analyses are possible to be miniaturized by using modern microfabrication technology developed for semiconductor manufacturing. The research field related to μTAS is now often referred to as microfluidics.

Significant progresses in microfluidics have been made in past two decades, including commercialization of microfluidics-enabled instruments such as Bioanalyzer 2100 from Agilent Technologies and BioMark HD System from Fluidigm Corp. However, the original goal of developing μTAS to replace chemical sensors has not yet been realized. On the contrary, chemical sensors are still flourishing in both research and industry. There are 4075 papers in 2011 mentioning chemical sensor or biosensor in their titles/abstracts according to the Web of Science database (Thomson Reuters). The global market generated by glucose sensors alone (for self-monitoring blood glucose) is $9.7 billons US dollars in 2011.

One reason for non-fulfillment of μTAS replacing chemical sensors is that a microfluidic device is more a sensing system than a sensor. Janata [3] pointed out that “a chemical sensor acquires information continuously” while “a sensing system obtains information in discrete steps”. Moreover, the following challenges must be addressed before the potential of microfluidics can be fully realized. The first challenge is related to sample preparation [4] and macro-micro interfaces [5]. Samples from the real world are often in quantities of micro liters (μL) to liters whereas microfluidic devices generally consume only nanoliters or even picoliters of samples due to the size of microchannels; the tiny sample volume can be problematic and sometimes inappropriate for the detection of an analyte in low concentration. The second challenge is related to much higher surface-to-volume ratio in a microchannel than in a conventional container. Surface properties of microchannels are critical as they affect fluid flow behaviors and surface absorption, and their importance is evident from the development of a variety of surface modification methods [6]. The third challenge is related to the requirement of a sensitive detection method (e.g. laser-induced fluorescence detection) due to extremely small detection volume, and such a detector is sometimes too bulky to be portable.

In many aspects, chemical sensors and microfluidics are not directly competing with each other. In fact they can be complementary to each other. For instance, some sensors may function as detectors in microfluidic devices. In terms of usages, chemical sensors play an important role in rapid and continuous sensing in applications like glucose measurement, environmental monitoring, and detection of pathogens and other substances. Microfluidic devices could be more useful for those applications requiring electrophoresis, introduction of various reagents (e.g. cell culture and assay), or other sophisticated procedures. Microfluidics also has unique capabilities in carrying out highly parallel assays, which allow one to investigate the research subjects that are difficult to study using traditional bench-top instruments [7].

After all, the limitation of chemical sensors prompted the initial creation of the microfluidics field.