Coding by Different Diameter Impedance, Detection Method of Microspheres Which are Used to Produce Liquid Biochip

Copyright: © 2012 Wang Z, et al. This is an open-access article distributed under the terms of the Creative Commons Attribution License, which permits unrestricted use, distribution, and reproduction in any medium, provided the original author and source are credited.

This research was aiming at developing liquid biochip which was coded by impedance microsphere of different diameter and providing research foundation for its detecting device. Adopting the method of loading constant current source between both ends of micropore in ruby, it were tested that three sorts of microspheres’ impedance with particle sizes of 2μm, 5μm, 10μm. It was resultantly found that microsphere diameter is in direct proportion to impedance and voltage between both ends of micropore. In other words, microsphere of different size could be distinguished from each other by their impedance. Our research drew the indication that impedance of microspheres in different sizes could be theoretically calculated as well as measured and automatically distinguished, offering experimental and theoretical foundation for liquid biochip development.

Liquid biochip refers to multiple microspheres diagnostic technique which is based on principle of coding analytes by microspheres. Fluorescence color-code microspheres biochip was produced by bioengineer company and has been put into clinic application and practice. At the same time, it has played significant role in fields of disease diagnosis, medical scientific research, etc. [1-3]. Nevertheless, color of microspheres is not the only feature to code analytes, there still are other features of microspheres when coding analytes [4].

Impedance is one of material basic physical properties. The author proposed a new technique which is characterized by liquid biochip impedance- coded microsphere. Moreover, it obtained intellectual property right in 2007 [5]. The amount of information from microspheres impedance supposes to be infinite in the side of theory, as well as the categories of substance which are used to determine its impedance. The technique of impedance-code microsphere may well be more significant than color-code one. It gains potential developing prospect while it lacks relevant research in China and the world as a whole.

Decting-tech for microspheres of different impedance is the skill crux and critical step of the biochip technology. So vital are the corresponding theories and experiments in research and development of impedance-code microspheres.

The impedance differs from different diameters of microspheres in one material. If their electronic signal could be detected automatically, these microspheres have the capacity to code analytes in the prospect of theory. Therefore, we set microspheres which are in three different diameters and in the same materials as research stuff. After programming the device of loading constant current source between the both ends of micropore in ruby, it automatically detected impedance of microsphere by inspecting voltage between the both ends of micropores when microspheres flowed in. It provides research foundation for manufacturing and developing liquid biochip of impedance-code microspheres in different sizes.

Preparation and observation of microspheres in different sizes

Preparation of microspheres in different sizes: According to literature [6], we manufactured polystyrene microspheres in varied micrometer sizes, by adopting the method of dispersion polymerization. We infused the compound of phenylrthylene, ethanol and AIBN (azobisisobutylonitrile) into 100ml flask with four necks which was connected with ventilation device and electric agitator. Then, we added ethanol and PVP (polyvinylpyrrolidone) mixture solution to it, stirred with the speed of 200r/min. In order to get rid of oxygen, argon has been past into it for 30min. After that, we heated it up to 70°C and kept in reaction for 12 hours in thermostatic water bath. Once the reaction was finished, we rinsed the emulsion with water-enthaol mixture and centrifugated it in the rate of 6000r/min. After repeating the process six times, we have got seed beads. Blended with 2.0 g cyclohexane as swelling agent, we added a handful of seed beads with 30 g SDS (sodium dodecyl sulfate) solution though ultrasonic device. Disposed seed beads were swelling for 12 hours in 250ml flask with four necks, under the temperture of 30. Next, compound of phenylrthylene, BPO (benzoyl peroxide and SDS solution were infused proportionally into the flask for swelling 12 hours. Styrene, BPO and SDS were proportionally added to the flasks so as to swell for 12 hours. Then, we added 80 mL PVA solution to the mixture, kept in 80 water bath for reaction, lasted as long as 12 hours. After the reaction, microspheres were washed with alcohol/water mixture, and centrifuged at the speed of 6000 r/min. After repeating six times, the products were dehydrated in vacuum drying oven. The control of monomer content of microspheres and swelling ratio which were finished in our experiment have provided a wide range of polystyrene impedance-code microspheres with the diameter of 2.0 μm, 5.0 μm and 10.0 μm. The photographs of polystyrene impedance microspheres with different particle sizes are shown in Figure 1a,b,c. Width detection of volume distribution in microspheres with different sizes: Using tri-classification blood counting instrument provided by Tekang technology Limited Company of Jiangxi, we detected saline solution mixed with polystyrene microspheres in different sizes. As the volume of these microspheres has not gone beyond the volume of leukocyte, erythrocyte and thrombocyte, which are 10-15 μm, 6-9 μm and 2-4 μm in particle size, so the blood counting instrument could display results in histogram. Finally, it is available for us to calculate the average size and coefficient of variation of three sorts of polystyrene microspheres through the histogram of red blood cells or mean platelet volume (MCV or MPV) and their coefficient of variation of the volume distribution width (RDW or PDW).

The principle, device and its methods of detecting impedance of microspheres in different sizes

Detecting device, technical parameters, and oscilloscope regulation parameter of impedance of microspheres in different sizes: Opening the main case of tri-classification blood counting instrument offered by Tekang technology Limited Company of Jiangxi, we have found the output connector in the circuit board, and linked it to input connector of UT-3000 E type oscilloscope made by Uni-Trend technology (dong guan) Limited Company. The micropore is 160 μm in diameter, and 345 μm in length. The voltage of constant current source between the both ends of micropore is 16.5 V, and solution resistance rate is 5.9510-2 ± 0.63μm•cm. The oscilloscope was set one grid in X axis as 2V, and one grid in Y axis as 10 ms with full bandwidth (200 MHz).

The method for detecting impedance of microspheres in different sizes: In our design of biochip, software is used to identify analytes. While single electronic signal of microsphere impedance was analysed one after another, software can complete the identification according to the relation between different analytes and their impedance. Hence, it is of great significance for the feasibility of this detecting technology that collecting the information of voltage changes when one microsphere flows into the micropore. By diluting the microspheres solution, we have gauranteed microspheres came into the micropore one after another. Then, the changes displayed on the screen of oscilloscope have been recorded.

The voltage change results between both ends of micropore 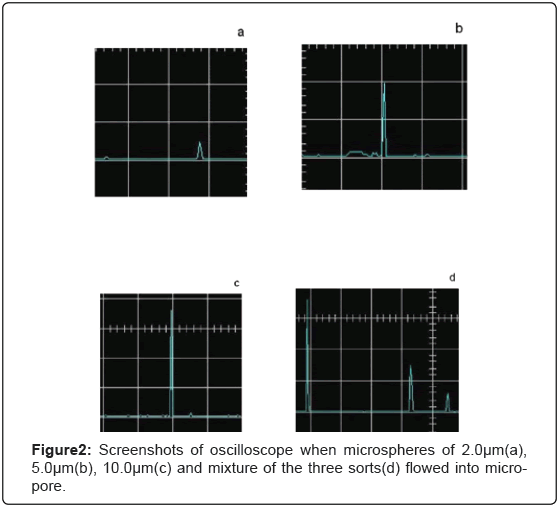 The principle of automatically detecting impedance of microspheres in different sizes

The result of this experiment shows that different particle size of polystyrene impedance microsphere can be detected and classified by micropore technology. As the resistivity of polystyrene impedance microsphere is far larger than the resistivity of electrolyte in the micropore, microspheres in certain size flowed into micropore and electrolyte solution was spilled in the same volume. Impedance between the two sides of the micropore is in direct proportion to voltage signal between the two sides of the micropore as well as the peak value of voltage pulse shown by the oscilloscope. Absolute value of the impedance is not the ultimate meaning of coding microsphere technology; instead, it is the fact whether the device can tell the small change of impedance. Theoretically, as long as the device can distinguish different impedance, we are capable of coding two different substances in demanding.

According to our experiment, the micropore device in blood counting instrument can detect electronic signal of impedance of microspheres in sizes. The result showed that the diameter of the microsphere with the same material is in direct proportion to the voltage signal between the two sides of micropore. This technology is feasible and it provides foundation for developing detection device of liquid biochip coded by impedance of microspheres in sizes.