Copyright: © 2011 Wang X, et al. This is an open-access article distributed under the terms of the Creative Commons Attribution License, which permits unrestricted use, distribution, and reproduction in any medium, provided the original author and source are credited

Field and laboratory diagnostic investigation was conducted during recent outbreaks of "High Fever Syndrome (HFS)" in numerous large-sized swine farms in Xinjiang of China which obtained pigs from Jiangxi and Hunan Provinces where outbreaks of HFS coincided. The syndrome occurred in these provinces from April 2006 to June 2006 with a peak of index cases in late May 2006. The most common clinical symptoms of HFS in affected pigs were elevating body temperature and rubefaction. Overall morbidity and mortality ranged from 20 to 80%. In sow farms the abortion rate by HFS reached 65% and many weaned piglets had severe dyspnea. The incidence rate of the syndrome in finishing/marketing pigs (10-15 months of age) was up to 50%. In deceased pigs, organ failure was observed in the lungs, liver, spleen, intestines, and lymph nodes. Animals examined had serological evidence of prior exposure to pseudorabies virus (PRV). Furthermore, laboratory testing by a PCR assay on samples from clinically affected animals demonstrated that the majority of index animals were concurrently infected with PRRSV and porcine circovirus type 2, suggesting that epidemic outbreaks of HFS was attributed to infection by multiple viral agents. Many index cases appeared to be related to the application of multiple live virus vaccines in an uncontrolled manner, raising the necessity for implementation of rigid regulation for vaccination programs.

Wild and domesticated pigs are susceptible to a number of viral infections. Exemplary viral agents of economic importance in the Chinese swine industry are swine influenza (SIV), classical swine fever virus (CSFV), pseudorabies virus (PRV), porcine reproductive and respiratory syndrome virus (PRRSV), porcine parvovirus (PPV), and porcine circovirus type2 (PCV2) [5,10,14,16,18,22]. Each agent has been implicated in reproductive, respiratory and/or neurological disease by itself or in combination.

Concurrent infections of PCV2 and PRRSV are common in swine [5,7,8,13,20]. Concurrent infections with PCV2 were linked to the secondary immune suppression noted in the postweaning multisystemic wasting syndrome (PMWS). Lymphoid depletions and immune system dysfunction at both humoral and cellular levels in pigs affected by PMWS may increase the vulnerability of the affected animals to other viruses [21]. Dual infections are not limited to PCV2, Swine can also be concurrently infected with PRRSV and PRV [17]. In general concurrent infections are believed to exacerbate the severity of disease. For example, experimental co-infection of PRRSV and PCV2 [11,24] produced significantly higher rate of mortality than did individual infection.

From April 2006 to Oct 2006, continuous outbreaks of the disease commonly referred as "Porcine High Fever Syndrome (PHFS)" were reported in numerous large-scale commercial swine farms in Nanchang (Jiangxi province) and Wuzhou (Hunan province) which are located in southern China. Geographic location of each province in China is illustrated in Figure 1. The clinical episode lasted until the spring of 2007. From March to October of 2006, the weather in Jiangxi and Hunan provinces were overcast and rainy. The daily temperature dramatically changed and became abnormally higher by the end of May 2006 than all previous years. Almost concurrently, a few large-scale swine farms in Hami of Xingjing Autonomous region in northern China which obtained their piglets from the same supplier farms in Nanchang and Wuzhou had disease outbreaks similar to PHFS. In those farms, pregnant sows displayed increased rate of abortions (10%-30%) at early gestation; Postweaning piglets appeared with respiratory distress. The morbidity rate was about 50% and mortality rate ranged from 50% to 90% among the affected animals. Soon after the temperatures rose, there was the increase in outbreaks of PHFS. After local swine producers became aware of the disease outbreak, they fed or administrated various antibiotics (e.g, taimycin, oxytetracycline, cephalexin) without determining the cause of fever or identifying any specific infectious pathogens. As a result, many pigs died of drug toxicity, as well as kidney failure, after the indiscriminant drug treatments. In order to rescue the remaining pigs, some producers simultaneously injected attenuated virus vaccines for CSFV, PRV and/ or PRRSV. High fever (40.5-41.5°C, very few was 42.5°C) was exhibited in affected pigs, and Anorexia, lethargy, emesia, diarrhea, constipation, rhinorrhea, cough and increased ocular discharge were also observed in clinical cases of PHFS; hyperpyrexia and anorexia afflicted about 65% of sows and a high rate of early abortions was noted, whereas a smaller percentage of the animals exhibited abdominal erythema and a significant portion of pigs with PHFS suffered from abdominal respiration and rubefaction over their entire bodies.

Many pigs showed periodic hyperexcitability, tremors, and paddling, and at later stage of the syndrome, their ears, abdomens, and limb terminals became purple (Figure 2A). Others developed skin rush with lesions (Figure 2B) or rubefacient skin over their entire bodies (Figure 2C). The clinical signs observed in field cases were nonspecific and variable. In addition to the clinical signs described above, there was a marked increase in mortality. Grossly, swollen inguinal lymph nodes displayed a mauve color (Figure 2D). Partial necrosis of the liver, hemorrhaged spleens, and swollen mesenteric nodes (Figure 2E) were also observed. Lung lesions included edema, interstitial pneumonia, and bronchointerstitial pneumonia with moderate to marked multifocal peribronchial and peribronchiolar fibrosis that often extended into the airway lamina propria (Figure 2F). Table 1: The primer sequences using in this study.

PCR amplification was done in GeneAMP PCR System 9700. Thermocycling conditions were: a) one cycle at 94°C for 5 min, b) 35 cycles of denaturation at 94°C for 45 seconds, annealing at 50°C (PPV), 55°C (PCV2, CSFV), 58.6°C (PRRSV), 61.5 (PRV) or 48.5°C (SIV) for 1min, respectively, and c) finally amplified at 72°C for 1min. The PCR reaction was completed with a final extension step of 10 min at 72°C. The presence of target viral gene(s) in samples was detected by electrophoresing 10µl of amplicon through 1% agarose gels in TAE bugger [40mM Tris-Aceate (pH 8.0), 1mM EDTA]. None of the samples were positive for PPV, CSFV and PRV while all of the samples were positive for both PPRSV and PCV2. As shown in Figure 3, each positive control viral agent could be specifically amplified using its defined primer pair. 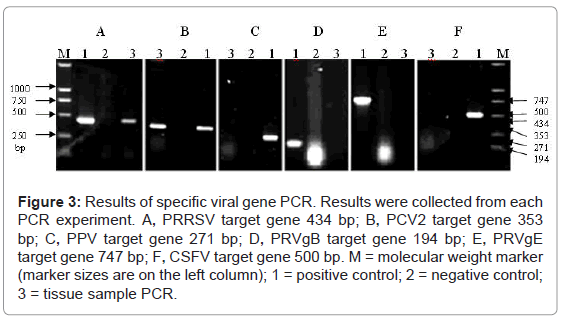 Standard aerobic and anaerobic bacterial culture testing was conducted using pre-reduced Columbia agar and MaConkey's agar (Sanland-chem International Inc). After 96-hour incubation, any growth of different colony type was subcultured and then subjected to phenotypic and biochemical identification. Escherichia coil (5/52) and Pasteurella multocida (2/52) were cultured out a few samples.

Sera (altogether 30 samples) were also collected from 30 diseased piglets pigs and 10 non-clinical piglets from eight large-scale swine farms and tested by dot immunoblot assays for antibodies specific for CSFV, PRRSV and PRV [4,12,19]. Pre-prepared diagnostic strips for the assay were kindly provided by the Harbin Veterinary Research Institute of the Chinese Academy of Agricultural Sciences (Harbin, Heilongjiang Province, China). Briefly, one drop (about 100µl) of serum sample which was considered to contain PRRSV-, CSFV- or PRV-specific antibody , was spotted into the center (5-mm square) of the strip, if serum antibody were positive of PRRSV-, or CSFV- or PRV specific antibody , ten minutes later, the Control band (C) and Test band (T) lines which treated with a colloidal gold stain would became visible at ambient temperature, Otherwise, only Control band (C) lines became visible. The detect results of serum sample were demonstrated in Table 2.

The present study reports a novel form of Porcine High Fever Syndrome among swine farms in Hami of Xinjiang Autonomous region in China. The etiological agents of the epidemic outbreaks were identified as PRRSV, PCV2, and PRV, demonstrating multi-factorial nature of the syndrome. As concurrent infections of PRRSV and PCV2 have become a major threat to pig-producing regions throughout the world since the discovery of PRRSV in the 1990s, finding of PCV2 and PRRSV co-infection would not be a novel observation. However, identification of concurrent infection by multiple viral agents is unique and distinct from previous reports [15,16] claiming that PRRSV with Nsp2 gene deletion was the etiology of PHFS. Although PRV DNA was detected in any of the samples tested, 60% of the pigs tested demonstrated serological evidence for the exposure to PRV. Furthermore, PRV infection was not previously found in Hami and vaccines were not used in the area. Thus, the pigs probably recovered from prior PRV infections. Nonetheless, effect of the prior PRV infections on the pathogenesis of, and/or immune response to, PRRSV and/or PCV2 is unknown. The role of interaction among multiple agents in PHFS as a pathogenic mechanism remains to be further studied.

Vaccines for various infectious agents were used in response to outbreaks of HFS. The field epidemiological data suggested that PHFS outbreaks were most likely worsened by the uncontrolled administration of multiple live virus vaccines. Interestingly, CSFV (wild type) was not detected and despite two-thirds of the pigs were vaccinated with CSFV live vaccine before sampling. Perhaps the dual infection of PRRSV and PCV2 may have inhibited the effective immune response to CSFV although it did not inhibit the on-going immune response to PRV. There was no evidence that dual infection of PRRSV and PCV2 promoted CSF by a wild type. HPRRSV and PCV2 could cause Escherichiacoli and Pasteurella multocida culture, and HPRRSV and PCV2, Escherichia coli and Pasteurella multocida may cause HFS together. Nonetheless, these observations emphasize that precaution should be taken when applying multiple live vaccines to swine farms in an unregulated manner because multiple agents could act synergistically for a disease even though the vaccine viruses are attenuated.