Copyright: © 2013 Perry Y, et al. This is an open-access article distributed under the terms of the Creative Commons Attribution License, which permits unrestricted use, distribution, and reproduction in any medium, provided the original author and source are credited.

A 25-year old Puerto Rican female presented with increased shortness of breath, cough and chest pain. Her past medical history included diagnosis of asthma In Puerto-Rico at the age of five, treated with advair. During her third pregnancy, at the age of 23, the patient experienced shortness of breath and reported “fainting”. A chest CT at that time diagnosed her with lobar emphysema.

In the United States, she presented to an outside hospital with exacerbation of shortness of breath, where she was thought to have a pneumothorax, and a right chest tube was placed. She was then transferred to the Medical Center ICU. At presentation, She was afebrile, exhibiting tachycardia (117 bpm), with 28 respirations per minute, oxygen saturation of 91%, and decreased breath sounds on the right chest field.

Pulmonary function test suggested of Restrictive Lung Disease (RLD) (Table 1). The patient’s initial X-rays, as seen in Figure 1, indicate hyperlucency on the right side, flattening of the right diaphragm, and a slight shift of mediastinum to the left. The right lung is collapsed inferiorly. There are a severe number of bullae within the right hemithorax, with some consolidation or collapse in the region of the right perihilar region. Since the patient’s shortness of breath was not successfully managed with Oxygen support and chest tube drainage, she was scheduled for a bronchoscopy and a Video Assisted Thoracoscopic Surgery (VATS) - right upper lobectomy.

The right upper lobe composed entirely of large bullae. The bullae did not deflate and were densely adherent to the chest wall. There were also aberrant blood vessels from the chest wall to the bullae, with no apparent superior pulmonary vein, pulmonary artery, or bronchi going to the bullous portion. However, the segmental bronchi and major pulmonary vessels were found attached to the area of the hilum of the atritic lobe. An endoscopic EndoGIA (Covidian) used to divide the vessels and the rudimentary bronchus. The lobe removed with an endobag. A 28 french chest tube was left in the chest.

Microscopic examination of the resected lobe showed dense fibrosis, smooth cell proliferation with entrapped cuboidal respiratory epithelial-lined spaces. The large bullae found in the periphery of the emphysematous lobe were fibrous-walled. These findings confirmed chronic changes consistent with congenital lobar emphysema and appear to be secondary to bronchial atresia. No evidence of bronchial muscle proliferation to support the diagnosis of asthma.

The patient’s postoperative course was uneventful; the drain was removed on postoperative day 3 and she was discharged home 4 days after her surgery. In the beginning of July 2009, the patient revisited the hospital for a follow-up exam. Her thoracoscopy incisions had completely healed and she was feeling much better clinically.

Post-Op Chest X-Ray shows expansion of the right middle and lower lobe, the right hemidiaphragm is no longer flattened, and the mediastinum has shifted back to the midline (Figure 4). 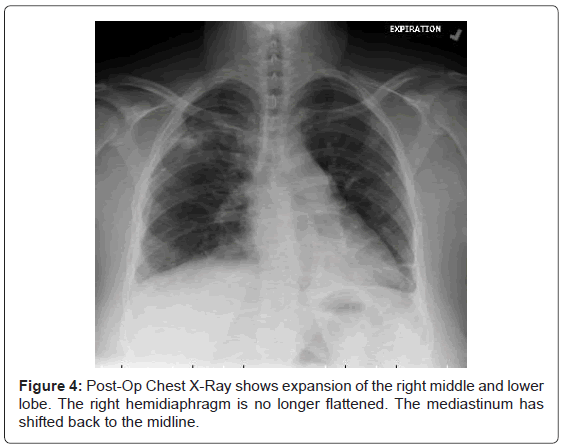 Figure 4: Post-Op Chest X-Ray shows expansion of the right middle and lower lobe. The right hemidiaphragm is no longer flattened. The mediastinum has shifted back to the midline.

Table 1: Pulmonary function test before and after surgery.

Bronchial atresia is suggested etiology for lobar emphysema, it is a congenital condition in which the bronchus lacks communication within the central airway. This disorder is characterized by a bronchocele, a localized dilation of the bronchus, due to a mucus-filled bronchus that has prematurely,blindly terminated. It involves hyperinflation of the peripheral lung. Seo et al. [12] outlines two cases of congenital lobar emphysema that have been caused by lobar bronchial atresia. In cases in which CLE is directly linked to bronchial atresia, the pulmonary parenchyma distal to the lesion may be aerated by collateral ventilation [12]. This is not as effective in expiration as it is in inspiration, resulting in a significant amount of air trapping. The pathogenesis has been described as “localized interruption of the blood supply to an already formed bronchus, resulting in bronchial infarction and luminal obstruction, or developmental abnormalities of bronchial cartilage after completion of bronchial branching [13]. In patients in whom congenital lobar emphysema is caused by bronchial atresia, the affected emphysematous lobe is extremely large, with concomitant compression of the normal lung tissue, displacement of the mediastinum, and herniation of the emphysematous lobe across the antrerior mediastinum into the opposite side of the chest [12]. These findings are consistent with the most typical presentations of CLE.

In the case we presented The CT scan showed narrowed RUL bronchus but it was not atretic, the bronchoscopy documented formed RUL bronchus although narrow and smaller compared to the patients other bronchi, and no evidence of mucocele. The pathologic analysis documented abnormal bronchus wall and structure suggesting a variant of bronchial atresia. We presume that this is the cause of the lobar emphysema in our patient; the late presentation can be explained by an incomplete atresia of the upper lobar bronchus.

The adult patient treated in our case had underlying compromise of her respiratory lung function, yet, since she was breathing spontaneously, did not require positive pressure ventilation.

However, the mediastinal shift associated with CLE makes intubation difficult [14]. Intubation should thus be supplemented with fiberoptic bronchoscopy in case of tracheal deviation, and should be attempted in an anesthetized but spontaneously breathing patient [15].

A thoracotomy is often recommended for patients with CLE who are more challenging thoracoscopically because of inadequate lung collapse and poor visualization, but with the new advancement and the accumulative experience in VATS lobectomy, our patient was treated thoracoscopically [16,17]. In the literature there are few reports on treatment of CLE with thoracoscopic approach while most of it in childhood [18-23]. Thus, in adult we found one case report by Muramatsu [24] while no long-term follow up or pulmonary function improvements were mentioned.

Our case report helps to make the medical community aware of this rare pathology in adults and supports VATS lobectomy as an ideal approach to treating highly symptomatic CLE adult patients.