Copyright: © 2011 Zein SHS. This is an open-access article distributed under the terms of the Creative Commons Attribution License, which permits unrestricted use, distribution, and reproduction in any medium, provided the original author and source are credited.

Every year, more than 2.2 million bone grafting procedures are performed worldwide. Bone tissue engineering seeks to develop strategies to heal bone loss due to disease without the drawbacks and impediments of existing clinical autografting and allografting treatments [1]. One of the most promising groups of synthetic bone replacements is calcium phosphate cements (CPCs). Due to the similarity between CPCs and the mineral phase of bone, as well as the in situ setting ability of CPCs, CPCs are potential materials for use in minimally invasive surgery and are considered a promising material to repair bone defects [2]. CPCs have been developed as injectable bone substitutes (IBS) due to their biocompatibility, excellent bioactivity, self-setting characteristics, low setting temperature, adequate stiffness and easy shaping into complicated geometries[3,4]. A number of CPC products are available commercially; however, they have limited compressive strength, so the use of CPCs is restricted primarily to non-stress-bearing applications, such as in maxillofacial surgery, the repair of cranial defects and dental fillings [5-7]. To overcome these problems and challenges, the combination of CPCs with carbon nanotubes (CNTs) is being increasingly investigated to exploit the extraordinary mechanical properties of CNTs to reinforce bioceramic matrices [8,9]. CNTs have an excellent potential to reinforce CPCs based on their small dimensions, high aspect ratio (length to diameter) and high strength and stiffness [10]. Incorporation of CPC with proteins, such as bovine serum albumin (BSA), was suggested to prepare improved calcium phosphate ceramics [11-15]. The addition of low concentrations of BSA has been shown to enhance calcium phosphate crystal growth, whereas higher concentrations inhibited calcium phosphate crystallization [13,15].

Smart et al. [16] have shown that fibres which are shorter than 7 μm are non-toxic. These fibres are easily phagocytosed and cleaved by macrophages [17]. Ye et al. [18] have reported that long fibres (>17 μm), are difficult for macrophages to phagocytose, leading to the chronic release of inflammatory mediators and contributing to fibrosis. However, there are still disagreements in toxicity reports. There are some in vitro studies have shown that functionalising CNTs can improve their aqueous dispersibility, biocompatibility and their toxicity profile in vitro [19-21]. The majority of studies suggests that the not only CNTs can improve the mechanical properties, but also the can stimulate bone regeneration and are non-toxic in vivo when functionalised to be more easily dispersed in water [10].

Previous researchers have studied the toxicity of CNTs using cell lines [22] or animal models [23-25]. The results of these studies are contradictory in nature, with some indicating that CNTs are highly toxic and others showing non-toxic effects. For example, Cui et al. [26] studied the treatment of human embryonic kidney (HEK) 293 cells with single-walled CNTs (SWCNTs). Their result shows that this can lead to a time- and dose-dependent reduction in cell viability [26]. Another experiment that was conducted on human promyelocytic leukaemia (HL) cells (HL-60) demonstrated that SWCNTs at concentrations up to 25 μg/mL do not have a proliferative effect on cells or an effect on the viability of the cells if the cells are exposed to SWCNTs for a period of short time (for example, 2 h) [27]. Muller et al. [28] studied the in vitro and in vivo effects of MWCNTs on epithelial cells and showed the possibility of adverse effects of the MWCNTs [28]. In the case of CNTbased biomaterials, particular nanotoxicity issues must be considered. Recent reviews highlighting nanotoxicological challenges with CNTs are available. Due to concerns about the cytotoxicity of CNTs [29- 31], more extended in vitro and in vivo studies are clearly necessary before clinical applications can be realised and the product can be commercialised for tissue engineering and biomedical products.

In this article, the in vitro cytotoxicity behaviour of a novel injectable CPC filled with hydroxylated MWCNT (MWCNT–OH) and BSA (CPC/MWCNT-OH/BSA) are presented. The CPC/MWCNT-OH/ BSA composites were prepared according to the procedure reported in a previously published paper [32]. Briefly, equimolar fractions of β-tricalcium phosphate, β-Ca3(PO4)2, (β-TCP) and dicalcium phosphate anhydrous, CaHPO4, (DCPA) were mixed with de-ionised water, 0.5 wt % of MWCNT–OH and 15 wt% of BSA to produce CPC/MWCNTOH/ BSA composites. The CPC starting materials were blended until a homogeneous paste was obtained and then packed into a cylindrical stainless steel mould (diameter of 6 mm and length of 12 mm). The packed stainless steel mould was stored in an incubator at 37°C and 97% humidity for 24 h. Then, the samples were taken out and dried at room temperature. In vitro bioactivity studies were carried out using simulated body fluid (SBF). SBF, which contains inorganic salt ions at nearly equivalent concentrations to those of human blood plasma, was prepared following the procedure proposed by Kokubo and colleagues [33,34]. To predict the in vitro bioactivity of this material, we investigated apatite formation on CPC/MWCNT-OH/BSA composites after soaking them in SBF for 7 days. For biocompatibility testing, the samples were placed in triplicate into a 96-well plate (Nunc, Wiesbaden, Germany). Then, 1.5 × 105 CCD-18Co cells per well were seeded into the 96-well plate and allowed to attach for 12 hours before treatment. The mitochondrial respiratory activity of the fibroblasts treated with the CPC composite particles was determined colorimetrically using MTT assays, as previously reported [35]. For each analysis, the samples were examined in triplicate, and the average and standard deviation were calculated. Data were recorded and analysed for the assessment of the effects of the test substance on cell viability and growth inhibition. 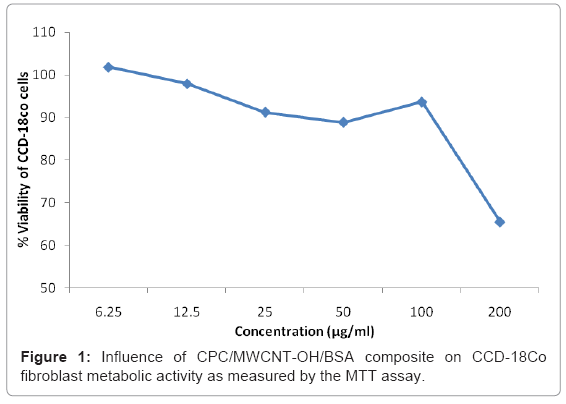 Figure 1: Influence of CPC/MWCNT-OH/BSA composite on CCD-18Co fibroblast metabolic activity as measured by the MTT assay. 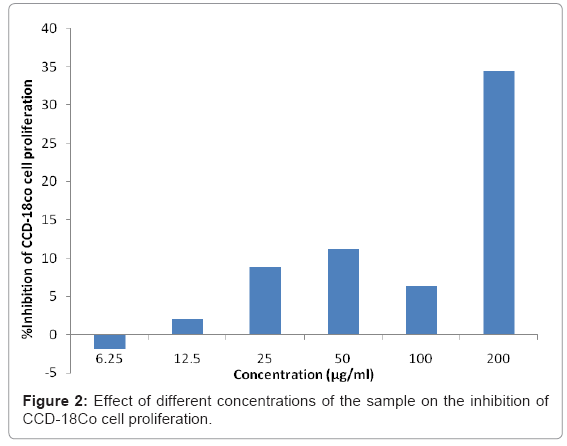 Figure 2: Effect of different concentrations of the sample on the inhibition of CCD-18Co cell proliferation.

The novel CPC/MWCNT-OH/BSA composites presented in this study showed favourable cyto compatibility. The toxicity study showed that all CPC/MWCNT-OH/BSA composite samples were non-toxic and did not damage human fibroblasts. At low concentrations, they had a positive effect on the viability of human fibroblasts. According to the preliminary results, the samples have not demonstrated cytotoxicity, and at low concentration it could show a proliferative effect on cells, so they could be able to promote the formation of blood vessels, which is required for the treatment of various diseases such as myocardial infarction, cardiovascular disorders and atherosclerosis, just to name few. Further study is required to investigate the effect of different immersion times on cell viability and cell proliferation in CCD-18Co cells. More research is also needed to determine the mechanism by which nanotubes mediate cytotoxicity and proliferation effects of this composite.