Copyright: © 2010 de Figueiredo NB, et al. This is an open-access article distributed under the terms of the Creative Commons Attribution License, which permits unrestricted use, distribution, and reproduction in any medium, provided the original author and source are credited.

Chromatographic analysis by the HPLC technique with Diode Array Detector was employed for MDMA determination. A mobile phase of methanol/water (90:10v/v) allowed a peak signal for MDMA in 16 minutes. Optimized spectrophotometric signal was obtained at a wavelength of 240 nm. The analytical curve from 5.0 to 100.0ppm of MDMA was obtained, showing a linear correlation coefficient of 0.9997 and a detection limit of 2.94ppm. This methodology was employed at the dosage of confiscated samples of ecstasy in the Scientific Police Laboratory of Ribeirão Preto-SP city.

Amphetamine and amphetamine analogues have become an important psychotropic drug class with stimulant properties. The best known substance in this group is 3,4-methylenedioxymethamphetamine (MDMA), which is popularly called ecstasy, an illicit substance in several countries worldwide.

Ecstasy has easily become a widespread recreational drug due to its stimulant effects on the central nervous system (CNS) and increased sense of well being [1]. This type of drug is capable of suppressing tiredness or hunger because it blocks serotonine, dopamine and noradrenaline reabsorption in the brain [1].

The relative simple synthesis of various types of amphetamine and the possibility of altering this structures (Figure 1) by substituting the aromatic ring without significant changes in their potency [2] has contributed to its dissemination around the world, too. Furthermore, ecstasy can be sold at lower prices because it can be prepared from many natural products, such as safrole, iso-safrole, and piperonal [3].

In the illicit market, ecstasy is commonly sold as tablets containing between 50 and 150mg of MDMA [4]. In order to increase income and gain, many times the drug dealers commercialize adrenaline or simply MDA as ecstasy [5,6].

Due to its robustness and low detection limits, the chromatographic analysis of MDMA in confiscated tablets has been carried out in several forensic laboratories around the world [3,7-9]. However, nowadays the major application of instrumental chromatographic techniques (HPLC and GC) consists in the research of MDMA and its metabolites in biological samples, such as hair [10,11], blood and plasma [12-16], and urine [17-20]. In terms of routine analysis in the police laboratories, instrumental chromatographic and spectrometric techniques figure as the most employed for the forensic analysis of drugs [21]. However, these systems are still not available in all police laboratories.

In this sense, the purpose of this study was to investigate a chromatographic methodology for ecstasy analysis in confiscated tablets by High-Performance Liquid Chromatography (HPLC), in order to verify its applicability in routine analysis accomplished in the Scientific Police Laboratory of the city of Ribeirão Preto -São Paulo, Brazil, and also in order to improve a partnership between the police institution and university.

Methanol from Merck (HPLC grade) and analytical standard MDMA from Cerrilliant (1000ppm in methanol) were employed in this work. Deionized water was obtained from a Milli-Q Water System (Millipore, CA, USA).

The confiscated samples of ecstasy were manipulated under supervision of the Institute of Criminalistics – city of Ribeirão Preto, state of São Paulo - Brazil.

The solutions used for construction of the analytical curve were obtained by dilution of 1mL analytical standard MDMA 1000 ppm in methanol. Six standard solutions with MDMA concentrations of 5.0, 10.0, 20.0, 30.0, 50.0 and 100.0 ppm, were obtained.

A Shimadzu HPLC equipped with a Shimadzu SPDM-10AVP Diode Array Detector linked to a data system (Class VP) was used to determine MDMA in seized ecstasy tablets. An injection valve of Reodyne with a 20µL sample loop was employed.

The mobile phase was a mixture of methanol and deionized water (90:10 v/v). The flow rate was kept at 1.0 mL min-1 at a pressure of 131 kgf cm-2. MDMA determination was carried out at ambient temperature (24°C), and the monitoring wavelength was 240nm, in order to produce optimized MDMA detection and prevent detection of amphetamine and metamphetamine [7]. Standard and sample solutions were injected into the equipment by a 20mL sample loop employed at the injector-comutator system. All measurements were obtained in triplicate.

Eight samples of ecstasy tablets, which were confiscated by the local police in different events and periods during the year of 2009, with different colors (blue, green, red, and yellow) were employed in this study. Each ecstasy tablet was crushed to a fine powder in a porcelain mortar. Specific amounts of the powder sample from each tablet were directly dissolved in methanol, to a final volume of 10mL, and previously filtered before injection into the chromatograph.

The recovery tests were performed by successive injections of ecstasy sample solutions and the same solutions were spiked with MDMA 100 ppm standard solution.

The chromatograms obtained in this work indicated a retention time of 16.0 minutes for MDMA, exhibiting good resolution and lack of interfering effect from other substances in the samples, as observed in Figure 2.

The analytical curve for HPLC was based on the relation of the peak area and MDMA concentration in the standard solutions. The peak area was plotted against the concentration, and a linear range was obtained from 5.0 to 100.0ppm (Figure 2-c). This curve presented a linear correlation coefficient of 0.9997 and a detection limit (LOD) of 2.94 ppm was calculated as being 3.SD/m, with m being the slope of the analytical curve and SD its standard deviation [6]. 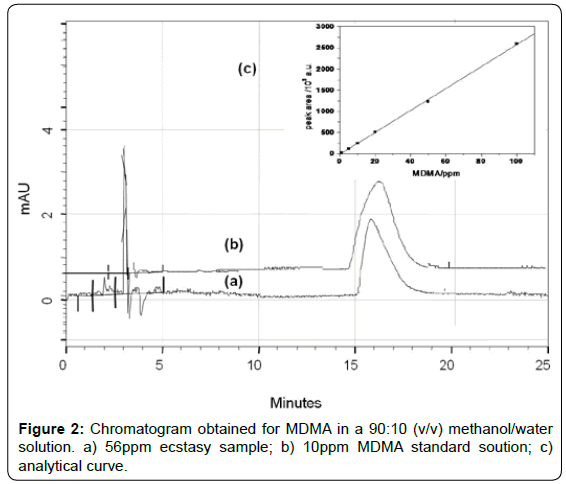 The recovery studies furnished values situated between 94.9 - 103.1% with coefficients of variation (C.V.) ranging from 0.7 to 6.5 %, thus indicating a good precision for MDMA determination in ecstasy seized tablets with good accuracy. A typical recovery test is reported at Figure 3. 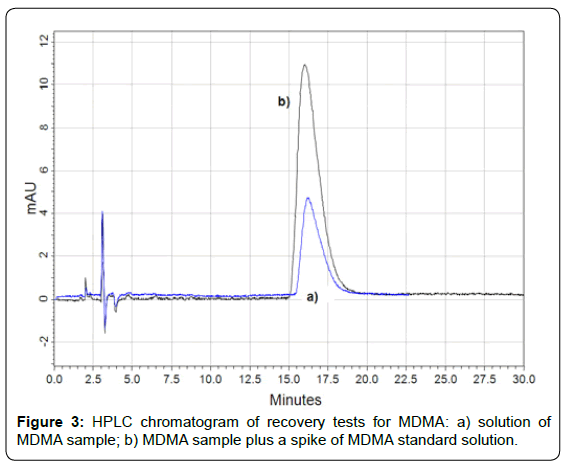 Figure 3: HPLC chromatogram of recovery tests for MDMA: a) solution of MDMA sample; b) MDMA sample plus a spike of MDMA standard solution.

According to the results obtained for the analysis of MDMA samples, each complete chromatogram can be obtained in 20 minutes without carryover effects. In this case, an analytical frequency of 3 analyses hour-1 (or 120 analyses week-1, considering only the commercial period of 8 hours and 5 days) is obtained for this technique. According to police information, the weekly incidence of ecstasy cases is lower than 15 samples; i.e., the proposed methodology can perfectly meet the local analysis demand. Additionally, the same equipment can promptly be employed for the development of analytical methods for the dosage of other drugs of forensic interest such as cocaine, crack and hemp.

- The actual chemical profile of ecstasy tablets presents a large amount of adulterant substances (up to 70%), which differs from the profile of the almost pure tablet samples (96-99.5% of purity) usually apprehended in the beginning of this decade;

- The similar drift (18 - 28%) observed for the samples suggests they have a possible common origin.

The analytical procedure for MDMA determination in seized ecstasy tablets by HPLC led to good repeatability and accuracy, without any elaborated pre-treatment.

According to the local laboratory of the Institute of Criminalistics, the forensic identification of illegal drugs by official agencies consists in at least two chemical tests - a presumptive and a final confirmatory test. The analytical frequency obtained for this technique strongly recommends this methodology, once it meets the local daily demand for ecstasy sample analysis. Therefore, this methodology can be used as a confirmatory instrumental test that can improve a rapid, simple, selective, sensitive and reproducible result for quantification and identification of MDMA in seixed ecstasy tablets.