Petroleum refineries use large quantities of water and the wastewater production strongly depends on the process configuration. Refinery wastewater includes run-off water, process water and domestic water. The water is complex in composition and the BOD and COD [1] values are in the range of 150-200 ppm and 300-600 ppm, respectively. Typical petroleum refinery wastewater contains cyanide, oil, phenols, benzene, sulfide, ammonia and heavy metals. In addition, chemicals are dosed into water to control corrosion and biofouling.

Petroleum refinery employs a wide array of wastewater treatment and disposal methods, because wastes generated from these industries vary not only in composition but also in magnitude (volume). Various techniques used to treat the effluents are Fenton oxidation [2], photooxidation [3], ozonation [4], oxidation by direct attack of oxidants and electrochemical methods [5].

Sonolysis is considered as a new possibility in wastewater treatment field [6] and sonochemical decomposition of organic pollutants is resulted from the formation and collapse of high-energy cavitation bubbles. When the bubbles collapse enormous increase in both temperature and pressure occur [7], which results in pyrolytic cleavage of toxic compounds present in the wastewater. Prolonged exposure of wastewater to ultrasound enhances the generation of oxidative species and its production rate depends on temperature and pressure prevailing at the time of bubble collapse [8,9]. The additives such as activated carbon [10], H2O2 [11], are used in addition with ultrasound during the treatment of industrial effluents, which were proven to be effective for the treatment of biorefractory effluents.

The presence of activated carbon stimulate the production of active radicals in two simultaneous mechanisms; homogeneous and heterogeneous. In the absence of activated carbon the controlling mechanism would be homogeneous which produced less active radicals. Therefore, degradation of petrochemical wastewater was significantly increased by the addition of activated carbon. Also minimum amount of COD remaining is observed with 1g activated carbon and 200mg/l hydrogen peroxide as additives. This is because, the presence of hydrogen peroxide a key parameter for COD reduction in advanced oxidation process, depending on its concentration and nature of reductants. Hydrogen peroxide increases the formation rate of hydroxyl radicals in two ways. First, the reduction of H2O2 at the conduction band would produce hydroxyl radicals. Second, the self decomposition as a result of ultrasound irradiation would also produce hydroxyl radicals. Generally the degradation efficiency increases with H2O2 concentration until an optimal concentration is achieved.

The objective of the present study was to develop an innovative method for the treatment of petroleum refinery wastewater involving sono-chemical treatment using additives of such as activated carbon and H2O2.

The ultrasonic irradiation was carried out in a sono-chemical reactor (SAISONICS, Chennai, India) with a field frequency of 30 KHz and volume of 3000 ml was used. The working volume was 500 ml and the sonication time was 30 min. Chemical oxygen demand measurements were performed using COD digester (Open reflux method). All pH measurements were made by using digital pH meter.

In the present study, ultrasonic degradation was performed with 500 ml of effluent. The effect of pH on degradation was carried out by varying the pH as 2, 4, 6, 7, 8, 9 and 10. The pH of the effluent was adjusted using 0.1M H2SO4 and 0.1M NaOH. The samples were collected for every 5 min and were centrifuged at 6000 rpm for 10 min. The supernatant was subjected to COD analysis and the optimum pH was arrived based on the maximum COD reduction.

The effect of addition of activated carbon and hydrogen peroxide during sonication was studied and in the present study.

Recycling of Activated Carbon Possibility of recycling activated carbon was enumerated, which has not been given attention in the literature. Initially, activated activated carbon was added into the effluent and the contents were sonicated. Then, the activated carbon was removed by filtration and added into distilled water (roughly equal to half of the volume of the original effluent). Then, it was sonicated for desired time to remove the adsorbed organics and destruct simultaneously. The technique followed is schematically represented in Figure 1. 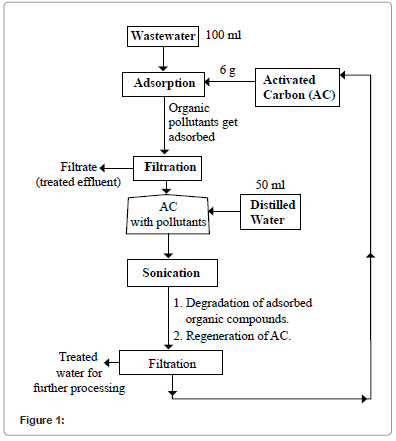 Chemical oxygen demand (COD) was determined by open reflux method [12] and the residual COD % was calculated using the following equation:

The effect of sonication time on % COD remaining is shown in Figure 2. From the figure it can be seen that at the end of 60 min sonication the % COD remaining was 56.666 %. Further increase in sonication time will definitely reduce the COD to a greater extend because the prolonged exposure of wastewater to ultrasound may enhance the generation of oxidative species. In elastic media such as air and most solids, there is a continuous transition as a sound wave is transmitted. In non-elastic media such as water and most liquids, there is continuous 3 tion as long as the amplitude or loudness of the sound is relatively low. As amplitude is increased the magnitude of the negative pressure in the areas of rarefaction eventually becomes sufficient to cause the liquid to fracture because of the negative pressure, causing a phenomenon known as cavitation. Cavitation bubbles are created at sites of rarefaction as the liquid fractures or tears because of the negative pressure of sound waves in the liquid. As the wave fronts pass, the cavitation bubbles oscillate under influence of positive pressure, eventually growing to an unstable size. Finally the violent collapse of the cavitation bubbles results in implosions, which causes radiation of shock waves from the sites of the collapse. The collapse and implosion of myriad cavitation bubbles throughout an ultrasonically activated liquid result in the effect commonly associated with ultrasound [13-15]. Thus, sonochemical destruction of pollutants in aqueous phase generally occurs as the results of imploding cavitation bubbles and involves several reaction pathways and zones such as pyrolysis inside the bubble and/or at the bubble-liquid interface and hydroxyl radical mediated reactions at the bubbleliquid interface and/or in the liquid bulk [16]. This is initiated by the hemolytic cleavage of water molecules by pyrolytic reactions, which may be represented as follows [17]: 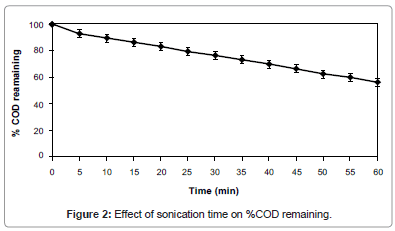 After the first reaction (Eqn. (2)), splitting of H2O into radicals, further reactions are depend on other oxidative radicals present inside the micro bubbles. The production rate of oxidants depends on the temperature and pressure prevailing at the time of bubble collapse. The lifetime of the micro bubbles is another important phenomenon that controls the production of oxidative species [8]. 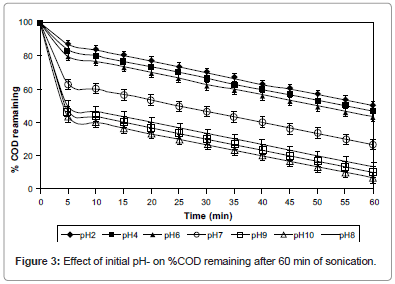 Figure 3: Effect of initial pH- on %COD remaining after 60 min of sonication. 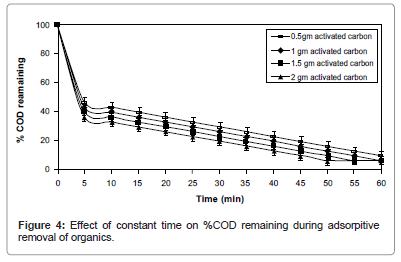 Figure 4: Effect of constant time on %COD remaining during adsorpitive removal of organics. 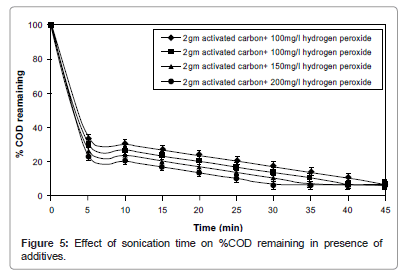 Figure 5: Effect of sonication time on %COD remaining in presence of additives.

Effect of additives on adsorption 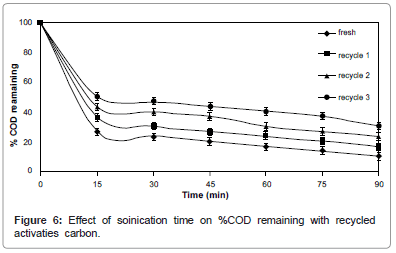 Copyright: © 2011 Rasheed QJ. This is an open-access article distributed under the terms of the Creative Commons Attribution License, which permits unrestricted use, distribution, and reproduction in any medium, provided the original author and source are credited.