Copyright: © 2013 Williams G, et al. This is an open-access article distributed under the terms of the Creative Commons Attribution License, which permits unrestricted use, distribution, and reproduction in any medium, provided the original author and source are credited.

The first step in the DNA profiling process is the recovery of DNA from the crime scene or item. Such surfaces can be varying with absorbent and non-absorbent surfaces. Ridged surfaces, such as those encountered on bottletops or firearms, are also common. Although low trace DNA or “touch DNA” is problematic in forensic casework, ridged surfaces should be a more effective surface for the recovery of such DNA due their abrasive nature. The aim of this study was to evaluate six recovery techniques; single wet swab, dry-wet double swab, wet-dry double swab, flocked swab, PCR square, and tape lifts. 36 falcon tubes with screw top lids were sterilised before DNA was deposited on the screw-top lids. Each of the recovery techniques were then utilised on 6 screw-top lids. All recovery media then underwent standard DNA extraction prior to DNA quantification by UV/Vis spectroscopy and quantitative PCR. The data indicated that the tape lifts recovered significantly more DNA from the ridged surface than the other techniques. There was no significant difference between the remaining 5 techniques, although on average, flocked swabs recovered the least amount. This suggested that the success in recovery of DNA is not down to the particular technique used, but down to the competence of the individual examiner and the amount of DNA deposited onto the surface.

One of the most important steps during the DNA profiling process is the recovery of DNA. Much research is carried out on the analysis and interpretation of DNA; however, no amount of increasingly sensitive amplification and analysis will overcome the issue of poor recovery.

Different surfaces do require different recovery techniques and research has been carried out in these areas, such as the use of tape lifts to recover DNA from clothing [1] and from fingerprints [2]. Such methods have included the use of various swabbing techniques, including the use of flocked swabs.

The aim of this study was to compare various sampling techniques in order to identify the most effective DNA recovery method for use on ridged surfaces, such as that encountered on bottle tops and firearms.

Thirty-six 50 ml falcon tubes with screw top lids were sterilised by Microsol and medi-wiped and then left to air dry under a UV light. Volunteers then unscrewed and replaced all of the screw top lids with bare hands. These screw top lids had ridged surfaces, similar to that of the common bottle screw tops. The falcon tubes were then split in six groups of six for sample recovery. Negative controls were included.

Single swabbing technique: This technique is a standard technique in which a sterile swab is moistened with sterile H2O and then rubbed over the surface which is thought to hold DNA. This swab then proceeds to the extraction phase [3].

Wet/Dry (WD) Double swabbing technique: WD or Wet and then Dry double swabbing technique is an expansion of the single swab technique. After the wet or damp swabbing has been done, a fresh sterile swab is then used to swab over the damp surface. It is thought that this second swab would recover any residues of DNA left behind on the damp surface. The swabs are then combined prior to the extraction phase. This technique is generally used on non-absorbent surfaces [3,4].

Dry/Wet (DW) Double swabbing technique: This is the same technique as above, except this time the surface is swabbed with a dry swab and then swabbed again with a wet swab. This technique is generally used on absorbent surfaces, such as clothing, as the wet swab can cause a ‘wicking’ effect in which the DNA material is drawn down through the fabric away from the surface; therefore making it difficult recover the DNA material. Although the majority of ridged surfaces are not considered to be absorbent, this technique is included for completeness [3,4].

PCR squares: This is a small square of sterile filter paper (˜3 mm2). This is moistened with sterile H2O and used as a swab. The square is usually manipulated by the tip of a 10 blade scalpel. However, since tool marks on metal or hard surfaces can be easily compromised by fine scratches, a wooden probe is used instead (similar in appearance to a cocktail stick). The PCR square then proceeds onto the extraction phase. The advantage of this technique is that it reduces the amount of substrate containing the DNA and therefore should be more effective upon extraction. Another advantage of this technique is that PCR squares can be manipulated into small spaces and surfaces, such as the magazine release on pistols.

Flocked swabs: Flocked swabs are effectively brushes where each of the bristles has an absorbent tip [5]. The theoretical advantages of the flocked swabs are two-fold. Firstly, the bristles can get into smaller spaces and surfaces, in a similar manner as PCR squares. Secondly, normal swabs have an issue in that the DNA material can wick away from the surface of damp swabs as the H2O soaks into the swab. This causes problems during the extraction phase as the swab itself is protecting the DNA from the detergent and proteinases. The flocked swabs overcome this by only having absorbent surfaces at the tip of each bristle, thus minimising any wicking effect and increasing the surface area for exposure to the proteinases [6].

Taping: Small sterile strips of adhesive tape (Invitrogen) were applied to the surface. The DNA material should then transfer on to the tape which can then be removed. This piece of tape can then be placed into a microcentrifuge tube for extraction.

Table 1: Showing the mean quantity (ng/μl) of DNA obtained from a range of DNA recovery techniques. Both NanoVue Spectrophotometry and Quantitative PCR (Quantifiler) data were used. Values shown are ng/μl with standard deviation in parentheses.

The values obtained from conducting UV/Vis Spectrophotometry are higher than those obtained using the Human Quantifiler Kit; this is due to the substantially higher specificity of the Quantifiler kit (Figure 1). 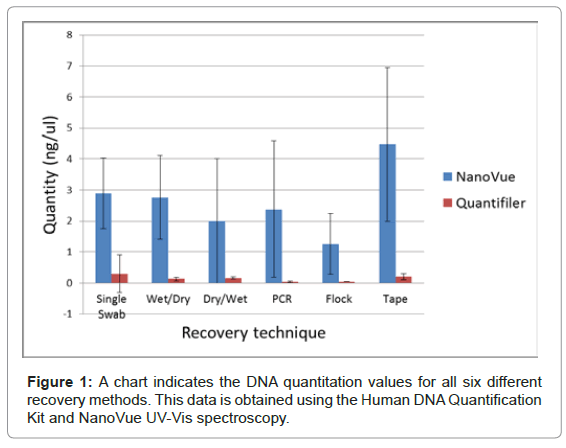 The aim of this study was to assess which of the more commonly used DNA recovery techniques is most appropriate for use on ridged surfaces. This was achieved by depositing human DNA on to a series of screw-top tubes and recovery said material using the 6 techniques. After undergoing standard DNA extraction, the amount of DNA was quantified using UV/Vis spectrometry and quantitative PCR (qPCR). Although dependant on the individual laboratory and the STR profiling kit selected, the amount of human DNA required to obtain a full DNA profile is generally between 0.2-0.5 ng. Lower amounts can still produce a useful partial DNA profile, albeit with a higher match probability.

The human DNA quantification valuesare considerably lower than this threshold; however, it might still be possible obtain a useful DNA profile. This is expected to a certain extent as the DNA sample in question is from low trace DNA or “touch DNA”. However, as the purpose of this study is to evaluate the recovery techniques, it is the amount of DNA that is recovered and subsequently analysed in comparison between the techniques that is of interest.

Although there is literature supporting the use of flocked swabs [1], these are limited to post-coital vaginal swabs and therefore do not necessarily relate to touch DNA on ridged surfaces. There is also a study by Hansson et al. investigating DNA recovery techniques from clothing [6] which also considered flocked swabs as well as tape lifts. This study also indicated that tape lifts recovered more DNA from clothing than flocked swabs; thus supporting the findings of this study, albeit on a different surface type.

In considering whether a single swab, double swab or flocked swab is most appropriate, there does not appear to be any preference. This suggests that any perceived preference for a particular method is more down to the individual examiner’s competence and the amount of DNA material present on the ridged surface.

In summary, of the 6 recovery techniques evaluated the use of tape lifts appear to be most appropriate for the recovery of low trace DNA from ridged surfaces. All other techniques were not significantly different, suggesting that any particular success in recovery of DNA material is a combination of the amount of DNA present and the examiner’s competence, rather than the technique itself.