Copyright: © 2012 Furukawa S, et al. This is an open-access article distributed under the terms of the Creative Commons Attribution License, which permits unrestricted use, distribution, and reproduction in any medium, provided the original author and source are credited.

Embryologically, the thymus is derived from all 3 germinal layers and arises primarily from the third pharyngeal pouch [1]. It descends from the piriform sinus and passes through the thyrohyoid membrane and out along the carotid sheath bilaterally. The primordium fuse in the midline and the thymus then descends into its usual anatomical position in the anterior mediastinum, where there is regression of the endoderm and lymphocyte invasion to form the characteristic Hassall’s corpuscles. The thymus occasionally fails to descend into the mediastinum. Usually, the main body of the thymus descends, leaving a strip of thymus tissue or a fibrous remnant along the line of embryonic descent [2].

We encountered three cases of the intra-thyroidal ectopic thymus at autopsy in the last four years (Figure 1).The reactivity of the Hassall’s corpuscles with antigens used was summarized in other else [3] in which we described that there were at least four different morphology of the Hassall’s corpuscles, that is, small solid type, solid type, mosaic type, and cystic type.

Figure 1: Three cases of the intra-thyroidal ectopic thymuses. HE staining showed that the thyroidal tissue covered a small nodule with blue color, where the thymus tissues were contained. (a); from 5 months girl, (b); from 3 months boy, and (c); from 16 years old girl.

The thymus tissues were obtained the ectopic and normal positioned thymus from 5 months-girl who died due to infectious bronchial pneumonia and 3 months boy who died due to infectious bronchial pneumonia and 16 years-old girl who was found death in the scene of a fire of her house with a 43 years old her mother and a 13 years old younger sister. The thymus tissues additionally obtained from two pairs of mother and girl or boy was also used in this study. One pair consisted of a 37 years old pregnant woman, who died due to bleeding from the uterus and a newly born girl who died due to chest compression by mother’s arm. Other case consisted of a 38 years old mother who died by hanging and a 10 years old boy who died due to strangulation by his mother using a rope. Histological examination was also performed in boy and girl who died due to hunger or sepsis by burn in an abusing, and a 14 year old boy who died due to subdural hemorrhage after two weeks of his head injury. The tissue sections were fixed in formalin and embedded in paraffin. Two sections from each sample of ectopic and normal position thymus and one from usual thymuses were stained using the haematoxylin-eosin (HE), to observe the overall structural aspects, number, shape and particulars of the Hassall’s corpuscles. Additional sections from each sample were immunohistochemically stained. The data concerning the antibodies used in this study was shown in Table 1. Staining procedure was performed by using Histofin SAB-PO kit (Nichirei Japan). Assessment of the staining results was carried out with the Nikon microscope system and pictures were edited in JPEG format.

The ectopic thymuses composed of cortical and medulla portions, and Hassall’s corpuscles were recognized in all the cases of ectopic thymus, and their number, size and morphological aspect were differ depend on each individuals, however morphological aspects were similar between ectopic and normal positioned thymuses within individuals. The Hassall’s corpuscles observed in the thymus from 16 years old girl mainly showed small type one and those from girl and boy mainly showed the mosaic type with moderate size, although they were completely younger. This result indicates that the morphology of the Hassall’s corpuscle was unrelated to the age of the individuals. The thymus involution was intensively increasing with age in a family consisted of mother and two daughters as shown in Figure 3. No thymic tissue was detected in a boy with hunger (Figure 4) and intensive involution of the thymus was observed in an abused girl and a boy with head injury. In this boy, no thymus was detected at autopsy and microscopic level. The results indicate that thymic involution normally occur with ageing, however stress can intensive progress the thymic involution irrespectively with age. 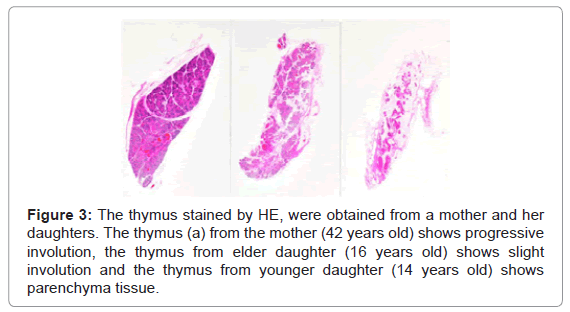 Morphology of the Hassall’s corpuscles in mothers and children, and in individuals with severe stress The thymus appears during the sixth week of gestation and is primarily derived from the ventral wing of the third pharyngeal pouch with possible minor rudimentary portions derived from the fourth pharyngeal pouch [1]. The intra-thyroidal ectopic thymes is uncommon and can be misdiagnosed as a thyroid lesion resulting in unnecessary further evaluation or treatment in the clinic [4]. Ito et al. [5] described that in some cases intra-thyroidal thymoma was thought to originate from ectopic thymic tissue or embryonic thymic rest in or adjacent to the thyroid. Concerning the incidence of the ectopic intrathyroidal thymus there are several reports showing different frequency, that is, from 0.03% to 3.14% [6,7].

Steinman et al. [8] showed that the lymphoid component within the true Thymic Epithelial Space (TES) begins to involute shortly after birth and decreases ~3%/yr through middle age (35-45 years of age) and continues to decrease ~1%/yr throughout the rest of life. The expansion of the non-thymopoietic Perivascular Space (PVS) such as adipocytes, peripheral lymphocytes and stroma, in the thymus with age results in a shift in the ratio of true TES to PVS, with the TES shrinking to <10% of the total thymic tissue by 70 years of age. George and Ritter [9] described that the thymus would completely cease to produce new T cells at ~105 years of age.

However other studies suggested that the Hassall’s corpuscle are active in many antigen expression, cell signaling, transcription, and metabolism mediated by cytokines or growth factor receptors [13-15]. Watanabe et al. [16] revealed that Hassall’s corpuscles have a critical role in debdritic-cell-mediated secondary positive selection of medium-to-high affinity self-reactive T cells, leading to the generation of CD4+ CD25+ regulatory T cells within the thymus. In this study we examined the morphological difference and the localization of several antigens in the Hassall’s corpuscles both in intra-thyroidal and normal positioned of thymus.

The results indicate that the Hassall’s corpuscles in the ectopic thymus also keep their role as the secretory parts for Thymic Stromal Lymphopoietin (TSLP). Fukunaga et al. [17] reported that the involution of the thymus can become an indication for child abuse and neglect, the ratio of the Hassall’s corpuscles with calcification may also indicate the degree and time of stress that inflicted the healthy situation of children. Further studies are necessary to solve this subject.