Copyright: © 2013 Li FF, et al. This is an open-access article distributed under the terms of the Creative Commons Attribution License, which permits unrestricted use, distribution, and reproduction in any medium, provided the original author and source are credited.

Background: Autosomal dominant Charcot Marie Tooth disease (CMT) diseases is an inherited peripheral neuropathies disease, the prevalence is 17-40 per 100,000 individuals 17-40 per 100,000 individuals. The complex genetic mode and large number of CMT causing genes and loci made it is very hard for clinicians and researchers when trying to determine the underlying genetic diagnosis. In this work, we want to identify the cause for a Chinese family with Charcot-Marie-Tooth disease.

Methods: Family history data were recorded. Clinical and Electromyography examinations were performed on the ten affected and ten unaffected family members. All the members were genotyped with microsatellite markers at loci considered to be associated with CMT. Two-point LOD scores were calculated using the Linkage software after genotyping. Some highly suspect genes were excluded by direct sequencing.

Results and Conclusions: The clinical and pathological features were relatively gently, but which became gradually worse, with the increased genetic generation, and the onset age of the affected members. Linkage analysis was obtained at markers D19S433 (LOD score [Z]=2.03, recombination fraction [θ]=0.0) and D19S916 (Z=1.6, θ=0.0). Sequencing the dynamin 2 gene (DNM2) didn’t found any variation in the translated region. There may be some other gene or loci associated with this disease.

Charcot-Marie-Tooth (CMT) disease is a genetically and clinically heterogeneous inherited disease, affecting peripheral neuropathies [1,2]. The prevalence of the disease is 17-40 per 100,000 people [3]. So far, more than 40 genes and 900 loci have been identified for their association with the disease (http://www.molgen.ua.ac.be/ CMTMutations/Mutations/MutByGene.cfm). The hereditary modes of CMT include Autosomal Dominant (AD) demyelinating (CMT1), AD axonal (CMT2), autosomal recessive and X-linked (CMTX) forms. The highly complex genetic modes and extraordinary large number of loci to cause CMT make it difficult for clinicians and researchers to determine the actual underlying genetic etiology. CMT is also known as hereditary motor and sensory neuropathy (HMSN), because it also affects the motor and sensory nerves. Variable ages of onset and progressive distal muscle weakness and atrophy are the main clinical characteristics, usually starting from the lower limbs and subsequently affecting the upper extremities [4]. The most typical features of the disease are gradual atrophy of distal muscles of the feet and legs, and the thin legs have been likened to an “inverted champagne bottle”.

Point mutations and sequence deletions in the dynamin 2 (DNM2) genes have been associated with the CMT disease. In 2005, the DNM2 gene was first reported to be associated with CMT [5]. Since then, three point mutations and two sequence deletions in the DNM2 gene have been described in DNM2 related CMT disease [5,6]. But the full spectrum of genetic changes leading to this disease is yet unknown. Here, we report a 4-generational Han Chinese family with CMT; we located the responsible locus at chromosome 19p13.2-19q12, which is flanked by markers D19S433 and D19S916.

Affected and unaffected individuals in the family

We ascertained a 4-generational Chinese Han family with nonsyndromic CMT (Figure 1) at the First Affiliated Hospital of Harbin Medical University, Harbin, China. Informed consent was obtained from each participant, consistent with the Declaration of Helsinki. We recorded their medical history in detail. Physical and electromyography examination was carried out on each of the family members. Genomic DNA was extracted from peripheral blood leukocytes using standard protocols.

Polymerase Chain Reactions (PCRs) were carried out with microsatellite markers close to candidate loci associated with autosomal dominant CMT. PCR products from each DNA sample were separated on a 6% polyacrylamide gel and analyzed. Pedigree and haplotype data were managed using Cyrillic (version 2.1) software. Exclusion analysis was performed by allele sharing in affected individuals.

A two-point linkage was calculated with the LINKAGE (version 5.1) package. Autosomal dominant CMT was analyzed with full penetrance and a gene frequency of 0.001. Allele frequencies for the markers were assumed to be equal in both genders. The marker order and distances between the markers were taken from the NCBI (http:// www.ncbi.nlm.nib.gov) databases.

DNA sequencing: Individual introns and exons of DNM2 were amplified by PCR using primer pairs shown in Table 1. The PCR products were sequenced on an ABI3130 Automated Sequencer.

The proband was a 38-year-old male (?: 24; Figure 1), who had difficulties in walking and frequently tripped starting at the age of 4. Gradually, the other clinical manifestations were also observed, including loss of muscle bulk in the lower limbs, inability to lift feet, hollow feet and sensory loss in the feet (Figure 2). At the age of 30, he started experiencing mild weakness and muscle atrophy in the hands, resulting in problems with fine motor skills. Neurological examination showed reduced biceps and triceps reflexes, and patellar and plantar reflexes were absent. The touch and vibration sensations of distal lower extremities were lost. Finger-to-nose and heel-to-shin tests were normal. There was no disturbance of autonomic function. Nerve conduction studies showed that motor nerve conduction velocities were reduced, amplitudes were decreased, and distal latencies were prolonged. Median motor nerve conduction was 12.7 m/s. The Compound Motor Action Potential (CMAP) of the bilateral tibial nerves could not be elicited. Sensory nerve conduction velocities were slightly reduced. Median sensory nerve conduction was 32.2 m/s. Electromyography studies showed an increase in duration and amplitude of action potentials in the right tibia is anterior muscle. Figure 2: The photographs of the affected individual : 24, show that the proband had hollow foot and loss of muscle bulk in the lower limbs.

This four-generational family included 12 affected individuals with congenital CMT. Their complete blood count, liver and kidney function tests, creatine kinase, myoglobin, blood lipid and glucose levels, and routine urinalysis were all normal (Figure 1).There was no history of other nervous or systemic abnormalities in the family.

Direct cycle sequencing of the amplified fragments of DNM2 in all affected individuals did not reveal any variation in the translated region. We also analyzed additional genes with direct gene sequencing, including PMP22 (CMT1A and CMT1E), MPZ (CMT1B), LITAF (CMT1C), EGR2 (CMT1D) and YARS (DI-CMTC), but we did not find any variation in the translated regions of those genes either.

The clinical and pathological features of CMT include approximately 88% CMT1A patients have slow Motor Nerve Conduction Velocities (MNCV) in the upper extremities. 52.8% CMT1X and 27.8% CMT1B patients have intermediate MNCV. And some patients with very slow MNCV and delayed walking were very likely to have CMT1A (68%) or CMT1B (32%). Patients with CMT1B unlikely to have very slow MNCV walked before 15 months of age, and patients with CMT2A very likely axonal forms of CMT [8]. Three types of dominantly inherited CMT with intermediate MNCV had been identified. CMTDI2 was linked to chromosome 10q24.1-q25.1[10-12], DI-CMTC was linked to chromosome 1p34-p35 [13], and DI-CMTB was linked to chromosome 19p12-13.2 [14,15]. Mutations had been identified in DNM2 gene for DI-CMTB [5]. From the previous researches, DNM2 mutations in DICMTB mainly located in its PH domain [5,6,16,17].

Although significant linkage was found with markers D19S433 and D19S916, and haplotype analysis showed that the responsible locus was localized at chromosome 19p13.2-19q12. The DNM2 gene was loci in this region. By direct gene sequencing, we didn’t found any variation in the translated region of the DNM2 gene. But we found a “C” insertion in the DNM2 gene intron between the exon3 and 4, in four affected family members (?:22, ?:24, ?:3 and ?:4), the other affected or normal family members did not have the insertion (Figure 3). DNM2 mutations can also be identified in DNM2-CNM patients [9,18-20]. The clinical and pathological features of DNM2-CNM were plantar muscle, calf and posterior atrophy [20], cardiac or respiratory failure, ptosis or ophthalmoplegia [18]. None of the patients in this family showed any abnormality in muscle, cardiac, respiratory or ocular. We also excluded the other genes, which had been identified linked with the CMT diseases, by allele sharing. 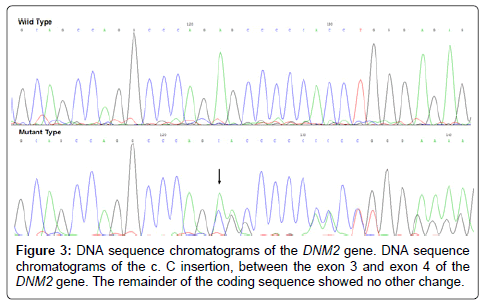 In conclusion, we described a four generation Chinese family with CMT disease. The clinical and pathological features were relatively gently, but which became gradually worse, with the increased genetic generation, and the onset age of the affected members also advanced. We also excluded all the genes, which had been identified, linked with the CMT diseases, by allele sharing and direct gene sequencing. Maybe there are some other genes or loci, associated with this disease.

The authors thank the patients and the family members for their cooperation and participation in this study. This work was supported by a grant from Harbin Medical University (2012081), grants of National Natural Science Foundation of China (NSFC30870098, 30970119, 81030029), and a Specialized Research Fund for the Doctoral Program of Higher Education (No.20092307110001) to SLL.