Copyright: © 2012 Bashir S, et al. This is an open-access article distributed underthe terms of the Creative Commons Attribution License, which permits unrestricted use, distribution, and reproduction in any medium, provided the original author and source are credited.

The etiology of autism spectrum disorders (ASD) is not well known but recently we reported that the serum levels of sonic hedgehog (SHH) protein and brain-derived neurotrophic factor (BDNF) might be linked to oxidative stress in ASD. We hypothesized that Indian hedgehog (IHH) protein which belongs to SHH family may play a pathological role in the ASD. We studied recently diagnosed patients in early stages of ASD (n=54) and age-matched, cognitively normal, individuals (n=25), using serum levels of IHH protein. We found statistically significantly higher-levels of serum IHH protein in ASD subjects (p=0.001) compared to control subjects. Our findings are the first to report a role of IHH in ASD children, suggesting a possible pathological role-played by IHH in early-stage in ASD. Such measures might constitute an early biomarker for ASD and ultimately offer a target for novel biomarker-based therapeutic interventions.

The incidence of Autism spectrum disorders (ASD) has been increased during the last decade to about 1/100 children with a maleto- female ratio of four to one (4:1) [1]. Despite the fact that there is an increase in autism research worldwide, exact etiology of autism and ASD remains largely unknown [2,3]. We reported recently that the serum levels of sonic hedgehog (SHH) protein and brain-derived neurotrophic factor (BDNF) might be linked to oxidative stress in ASD [4]. Indian hedgehog (IHH) and the sonic hedgehog (SHH) protein from the Hedgehog family. IHH seems to play at least two roles in vertebrate development. The first role of IHH appears to be critical for the differentiation of the visceral endoderm [3], and to regulate the proliferation and differentiation of the gut epithelial stem cell [5]. It appears that in the development of the gut, both sonic hedgehog and IHH are needed and many target genes that control cell growth, survival, and differentiation in a wide variety of cells, including neurons [6]. These are signaling proteins from the Hedgehog family. Research studies have shown that hedgehog signaling is activated in adult organism after injury and is involved in tissue repair mechanisms [6,7]. Thus the aim of the current study was to explore a possible role of IHH protein in children with ASD.

Fifty-four children with ASD were recruited in the study (mean age: 6 ± 1.72 years; age-range: 3-11 years, 51 males and 3 females) and 25 age- and sex- matched healthy children (7.04 ± 1.74; 3-11, 23 males and 2 females) served as the control group. The diagnosis of ASD was made by child neurophysiologist, and pediatrician based on the criteria of ASD as defined in the Diagnostic and Statistical Manual of Mental Disorders, Fourth (DSM-IV) [2] on the day of screening test. The Childhood Autism Rating Scale (CARS) was completed as a further measurement of the severity of ASD which rates the child on a scale from one to four in each of fifteen areas (relating to people; emotional response; imitation; body use; object use; listening response; fear or nervousness; verbal communication; non-verbal communication; activity level; level and reliability of intellectual response; adaptation to change; visual response; taste, smell and touch response and general impressions). According to the scale, children who have scored 30-36 have mild to moderate autism (n=24), while those with scores ranging between 37 and 60 points have severe autism (n=31). Complete diagnostic work-ups including medical, neurological, psychiatric, and psychological evaluations were done for all of the subjects. None of the participants had neurological disorders (seizure, traumatic brain injury, brain tumor). Written informed consent was obtained from all participants (parents/guardian) prior to entering the study, which had been reviewed and approved by the local Institutional Review Boards. All procedures followed were in accordance with the Helsinki Declaration.

After an overnight fasting, blood samples (3 ml) were collected from subjects in both groups in plain test tubes. Blood samples were centrifuged at 3,000 rpm to collect serum samples, which were stored frozen in a freezer at -80°C until the time of analytical assays.

Serum level of IHH was measured using a commercially available sandwich enzyme immunoassay (ELISA) kit from CUSABIO BIOTECH CO. Ltd (Wuhan, China). The detail description of the procedure has been described in our previous report [4]. No significant cross-reactivity or interference was observed. To increase accuracy, all samples were analyzed twice in two independent experiments to assess inter-assay variations and to ensure reproducibility of the observed results (P>0.05).

Metabolic data are presented as mean ± standard deviation (SD). Statistical differences were ascertained by using the Student’s t test with significance set at a P value of 0.05 or lower. The relationships between IHH levels and CARS among patients with autism were evaluated by computing Pearson’s correlation coefficients. 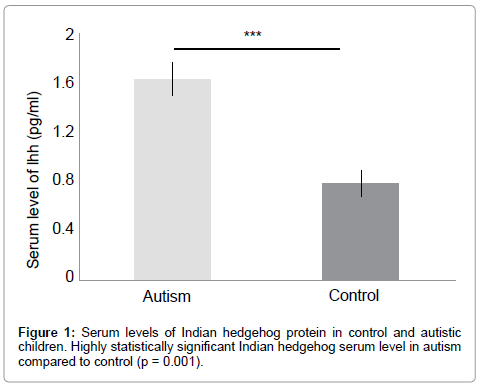 Table 1: Serum levels of Indian hedgehog protein in autistic children and their relation to the severity of autism.

The Indian Hedgehog protein is one of three proteins in the mammalian hedgehog family; IHH is involved in chondrocyte differentiation, proliferation and maturation especially during endochondral ossification [3,5]. It regulates its effects by feedback control of parathyroid hormone-related peptide (PTHrP) [8].Scientist demonstrated evidence related to hedgehog protein and involvement in the development and patterning of the central nervous system [6-11]. Human and animal disease model (Multiple Sclerosis Experimental Autoimmune Encepalomyelitis and cuprizone-induced demyelination) have shown elevated levels of hedgehog protein in the brain [12,13]. It points out towards a possible protective effect exerted by IHH and it is in agreement with our findings in autism. The roles of the hedgehog (HH) signaling pathway in the CNS are gaining some interest lately, due to multifunctional properties of HH, ranging from the regulation of new cells production to the modulation of neuronal electrophysiological activity [14].

It has been reported that activation of the Sonic hedgehog (SHH, belong to hedgehog family) pathway induces the increase of BDNF that may affect neuronal survival and differentiation. IHH is a morphogen important for the embryonic development. Possible correlation between BDNF and IHH is not studied. A recent study have shown causative relationship between the induction of SHH and BDNF [4]. Continuous administration of hedgehog inhibitor CPM to the injured site suppressed the increase of BDNF expression and, notably, deteriorated the survival of motor neurons in lumbar spinal cord [15]. In one scenario, IHH may act on a non-neuronal cell that in turn responds by secreting a neurotrophic factor. In another scenario, it is possible that IHH acts directly on some or all of the neurons, but the response is to secrete another factor(s) that actually possesses the survival activity. For example, IHH has been shown to induce the expression of TGFβ family members such as Bone morphogenetic proteins in vivo [16,17] and these proteins are trophic for midbrain dopaminergic neurons [16]. In the first case the factor is trophic for both dopaminergic and GABA-immunoreactive (GABAir) neurons. From the striatum, the surviving neurons are exclusively GABA-ir, whereas in the spinal cultures HH promotes survival of a heterogeneous population of putative interneurons. Metabolic stress induced by compromised mitochondria has been implicated in both acute and chronic neurodegenerative disorders such as ischemic stroke, Alzheimer’s disease, Parkinson’s disease (PD), and HD. Existing data provide support for considering IHH signaling as an important mechanism in tissue-repair process in brain diseases, and as a target for novel therapeutic approaches for the treatment of brain disorders and in particular ASD.

Our findings provide preliminary direct evidence of altered IHH protein in subject with ASD, which may contribute to the early pathogenesis of ASD offer valuable biomarkers and point to novel therapeutic interventions. However, given the small sample size, our results have to be considered preliminary and there may be patients who do not show such higher level of IHH in ASD. Hence, future studies with larger patient cohorts are warranted.