Copyright: © 2012 El-Cheikh J, et al. This is an open-access article distributed under the terms of the Creative Commons Attribution License, which permits unrestricted use, distribution, and reproduction in any medium, provided the original author and source are credited.

Disease relapse or progression after allogenic transplantation is a severe and life-threatening complication. The median post relapse survival is 3 months (1.6–6) when aggressive intervention is suspended. Although less frequent, graft failure (GF) is also associated with a poor prognosis [1,2].

The optimal treatment strategy for these patients has not yet been established. Although some patients can be re-induced into complete remission (CR) with conventional chemotherapy, only few become long-term survivors [2]. The benefit of donor lymphocyte infusion (DLI) for acute leukaemia is limited and not always possible, especially for patients transplanted with cord blood cells [1,3,4].

The recurrent malignancy or GF is the most frequent indication for second Allogeneic Hematopoietic Cell transplantation (Allo-HCT) [5]. Several studies have shown that a second Allo-HCT improves overall survival after relapse and represents a potential therapeutic option, which may increase the duration of leukaemia-free survival (6–25 months) [1,2,6].

However, this is associated with a high rate of non-relapse mortality (NRM) (24–75%) [6,7]. These results were obtained from small and heterogeneous series of patients. Furthermore, most studies have not compared the outcome of a second Allo-HCT with other interventions in the modern treatment era [8].

We report our single-centre experience of 22 consecutive patients affected by hematological malignancies who received a second Allo- HCT and we analysed transplant outcome after a long term follow up in terms of toxicity and disease outcome.

Between 1992 and 2009, 22 patients (16 males/6 females) underwent a second Allo-HCT and were treated at the adult allogenic hematopoietic stem cell transplantation program at Institut Paoli- Calmettes, the Cancer Research Centre, at Marseille, France. Fourteen patients (64%) were re-transplanted for relapse, six patients (27%) were re-transplanted for GF, and two patients had both graft failure and disease progression. Patients’ data were collected from a maintained database and by retrospective clinical chart review. The criteria for selection of patients for second transplant was good performance status, young age, availability of stem cells from the same or alternative donor, absence of chronic Graft Versus Host Disease (GVHD) and no alternative possible curative treatment.

Details of disease status and procedures for the first and second transplants appear in Table 2.

Table 2: Comparison of our cohort 22 patients at the first and second HCT

Nineteen patients (86%) had a HLA-identical sibling donor, and three patients (14%) had a matched unrelated donor (MUD) at the first transplant. Median time between the first and the second Allo-HCT was 12 months (2-134). The median follow up after the first Allo-HCT was 93 months (17-209) and the median follow up after the second Allo- HCT was 80 months range (38-129). At first transplant, 11 patients (50%) were in progression, 8 patients (36%) were in complete remission (CR), and 3 patients (14%) were in stable or minimal disease after first transplant. As concerns the second Allo-HCT, 19 patients (86%) received a RIC, with Fludarabine, Busulfan and Anti thymoglobulin (ATG)-based (36%), or Fludarabine and Total body irradiation (TBI) based (27%) or other (23%). While only three patients (14%) received a myeloablative conditioning regimen. Eighteen patients (82%) received a graft from a HLA-identical sibling donor, and 4 (18%) from a MUD. The same donor was used for the first and second transplant in 14 patients (64%); donor gender remained unchanged for 10 patients (45%) (Table 2).

The Kaplan-Meier product-limit estimates were used to assess the probability of overall survival (OS) and Progression-free survival (PFS) [9]. The probability of transplant mortality was estimated using the prentice cumulative incidence estimates treating non-transplant related death or relapse as competing events [10]. As part of this analysis, we did not perform any multivariate analysis since the number of patients was relatively small [11].

After second transplant, engraftment occurred in 95% of cases (21 patients): only one patient with cord blood cells had an engraftment failure and received a back up rescue of previously collected autologous stem cells. At the second Allo-HCT the patients received a median of 5.69 x 106/Kg of CD 34+ range (1.36-10.57), and 169 x 106/Kg of CD3+ range (4-628). The neutrophil count was higher than 0.5 x 109/l at a median time of 21 days range (8-64) after transplant, and a platelet count higher than 50 x 109/l without transfusions was reached at a median of 22 days range (1-64). The GVHD prophylaxis was not significantly modified between the first and second transplants (Table 2).

One patient presented an acute GVHD with grade I, 5 patients (23%) had developed acute GVHD grade (II-III), of those 2 patients grade III and none of our patients developed a GVHD grade IV. Five patients (23%) developed chronic GVHD. Of these, 3 patients (14%) developed limited chronic GVHD and 2 patients (9%) an extensive form. Other complications after transplant included severe interstitial pneumonia in one patient; none of patients had a veno-occlusive disease (VOD). Two patients (9%) died from transplant related causes, one patients because a severe pulmonary infection and one patient because a severe GVHD with multi organ failure. At the last follow up 8 patients (36%) were still alive, all of them are in CR and had a performance status (ECOG) of 0, and five are without any active chronic GVHD requiring steroids. 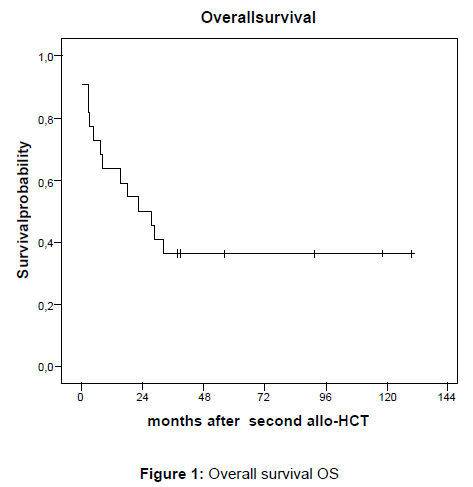 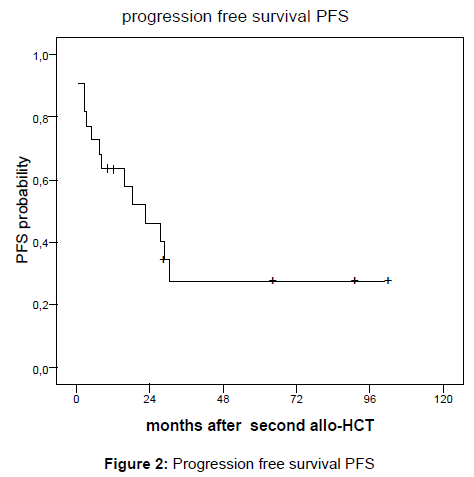 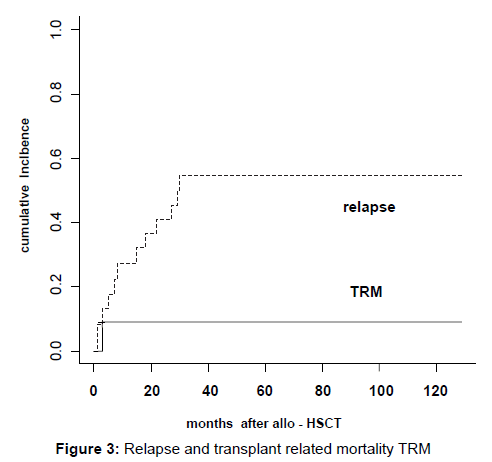 We report the results of long-term outcome after salvage therapy with second allo-HCT, in a group of 22 patients consecutively retransplanted at a single-institution program.

The incidence of relapse after Allo-HCT ranges from 10% to 70% depending on the original diagnosis and stage of the disease before transplant [12]. CSA withdrawal [12-17], donor lymphocyte infusions (DLI) [18,19] and second transplantation are possible therapeutic options [20-22]. In the literature, the results of these different options vary. Therefore, it is difficult to have a clear opinion on the best therapeutic strategy for the relapse of acute or chronic leukaemia after allo-HCT and particularly to determine the exact role of second allo- HCT [23-25].

Moreover, Falantes et al. [21] and Kishi et al. [27] have observed a better PFS when patients were re-transplanted in CR or Chronic Phase compared with that observed for patients with advanced or refractory disease. In patients with relapsed CML, Arcese et al. [26] also showed the significant influence of patient gender and the use of interferon given for relapse before re-transplantation. An interesting point is that, in some cases, the outcome after the second allo-HCT from the same donor was better than after the first in terms of OS, PFS and TRM.

Better results observed after second transplants with the same donors were similar to the phenomenon observed after infusion of donor lymphocytes, where we could observe a complete chimerism and a specific cytotoxicity against malignant cells accompanying the achievement of CR [17]. In our series, fourteen patients (64%) received the second Allo-HCT from the same donor; in these patients 4 patients (29%) are alive and in CR, while the other ten patients died, 9 patients (64%) because a disease progression and one because a GVHD. In contrast, of the eight patients transplanted with a different donor, four patients (50%) are still alive and in CR while 4 patients died, 3 patients (38%) because a progressive disease and one patient because a severe infection. This significant difference in the incidence of relapse or progression in patients re-transplanted with the same donor (64%) vs. (38%) in patients transplanted from an alternative donor, must be more evaluated (p=0.39) with HR = 2.343 (0.6-8.5). Considering the limited size of our cohort, this aspect is difficult to interpret.

Alternative strategies have been proposed for treating relapse after allo-HCT. Most of these are based on immune modulation enhancing the anti-leukemic effect of donor T cells. If relapsed patients are still receiving immune suppression, tumour cells could disappear after withdrawal of immune suppression, which unfortunately may also result in uncontrolled GVHD [12,13,18,29].

Recurrent malignancy after transplant may also respond to DLI, with long-lasting remission being reported in more than 50% of CML patients [17]. In a retrospective single-centre analysis, Elmaagacli et al. [25] examined the outcome of five different therapeutic approaches in 48 CML patients who relapsed after BMT. They observed a 50% response after abrupt cyclosporine withdrawal, interferon therapy or second BMT although, somewhat surprisingly, only 14% of responses were obtained after DLI.

Patients with acute leukaemia in remission and who relapse more than 1 year after a first transplant seem to be good candidates for a second transplant [21]. Of note, our results did not show any difference according to the initial diagnosis, and a second transplant may still be a valuable option for those patients with severe haematological malignancies like AML who experience a late relapse.

The difference in conditioning used before second transplant probably plays a major role [29].

In our study (86%) received a RIC, that can be explain the low acute GvHD grade II-IV (23%) and the TRM rate (9%). Furthermore the relapse rate of 41% at 2 years was acceptable in those high risk patients relapsing after first allo-HCT. Taking into account all these observations, the poor results of re-transplantations performed for relapse after a first allo-HCT seem to be related to the conditioning regimen toxicity and the advanced phase of the malignancy before conditioning. Nevertheless, second transplantation has been shown to be successful in 20-25% of patients in several small series [8,12,16,21,30].

In some previously mentioned series, PFS varied from less than 20% [19,24,28] to more than 35% [6,20]. In our series, after a long median follow up > 6 years, the 5 and 10 years probability of PFS was 28%, and the probability of relapse at 5 years was 55%. Interestingly the survival and progression curves after second allo-HCT stabilize with time and reach a plateau (Figure 1 and 2).

In conclusion, the limitations of our retrospective single centre study include the small sample size which prevents us from drawing any significant conclusions. Durable disease control was achieved after second allo-HCT and that could offer a good possibility for 1/3 of patients who might be cured. When facing a difficult therapeutic choice, a second transplantation should be considered for young patients who relapse at a long interval after the first allogenic transplant.