Copyright: © 2012 Alfaresi MS. This is an open-access article distributed under the terms of the Creative Commons Attribution License, which permits unrestricted use, distribution, and reproduction in any medium, provided the original author and source are credited.

This study was undertaken to investigate the prevalence of the hepatitis B virus (HBV) variant with the pre-S mutant circulating in the United Arab Emirates (UAE). The sequences of the pre-S and S regions were determined in serum samples of 90 HBV DNA-positive subjects who had been enrolled in the study. The results showed that genotypes D and A accounted for 77.8% and 17.8% respectively. The distribution of the HBV antigen subtypes was: ayw2 (78.9%), adw2 (14.4%), and adw (2.2%). Sequencing analysis showed that pre-S mutations were present in 4 samples (4.4%), with pre-S2 deletion as the most common mutant (50%). The pre-S mutations were associated with older age and a higher mean HBV DNA level. The study demonstrated that HBV genotypes D and A were the predominant strains circulating in the UAE and that the HBV pre-S mutant is very rare in this area, appearing only in genotype C.

Hepatitis B virus (HBV) is a small, enveloped 3.2 kb DNA virus with four Open Reading Frames (ORFs). HBV envelope proteins are encoded by three overlapping envelope genes contained within a single ORF: pre-S1, pre-S2, and S. Depending on the translated initiation site among S, pre-S2, or pre-S1, three different sized proteins are produced: a small hepatitis B surface protein (small HBs) containing 226 amino acid residues; a middle hepatitis B surface protein (middle HBs) containing 55 additional amino acid residues; and a large hepatitis B surface protein (large HBs) containing 108 or 119 additional amino acid residues, depending on the serotype. The pre-S region mediates hepatocyte attachment of the virus (amino acids 21 to 47 in pre-S1) [1-4], contains B-cell and T-cell epitopes [5-7] and a binding site for neutralising anti pre-S2 antibody (amino acids 120 to 145) [1,3,4] and has an S promoter for controlling the production of middle HBs and small HBs.

In the late 1990s, two major types of pre-S deletion mutant LHBS were identified and highly associated with Hepatocellular carcinoma (HCC) [8,9]. LHBS is expressed primarily at the late stage of chronic HBV infection, after the viral genome has integrated into the host chromosome [10-13]. Pre-S mutant LHBS was first isolated from ground glass hepatocytes (GGH), the histological hallmarks of the late stages of chronic HBV infection, and is often seen in the liver sections of HCC patients [14]. Pre-S mutant LHBS is highly associated with advanced liver diseases, including cirrhosis and HCC, which suggests that it contributes to hepatocellular carcinogenesis [15-23].

After pre-S mutant LHBS was discovered, various geographically diverse studies [15-23] screening for pre-S mutations invariably reported that they were prevalent in chronic HBV carriers. In addition, pre-S mutant LHBS, especially the pre-S2 type, is highly correlated with the severity of HBV-related liver diseases, including HCC [15-18,20]. Therefore, it is important to screen for pre-S deletion mutations in chronic HBV carriers. This type of screening should be done in combination with the detection of other HBV markers, such as viral titers and HBe antigen (Ag), to estimate an HBV carrier’s relative risk for HCC.

In this study, we investigated the prevalence and characteristics of the pre-S gene mutations predominant in the United Arab Emirates population as well as its association with HBV genotypes and both precore and core mutants.

A total of 120 consecutive serum samples from HBs Ag-positive patients were evaluated in this study. These samples were derived from 98 males and 22 females with a mean age of 36.4 ± 12.6 years (range: 18 to 70 years). All of these patients were UAE citizens. Serum samples were stored at -20°C and thawed immediately before use. The samples were evaluated for the presence of several serological markers of HBV infection (including HBe Ag, anti-HBe Ag, and HBs Ag) using the bio- Mérieux ELISA kit according to the manufacturer’s instructions.

The extraction and amplification of HBV-DNA was carried out by nested PCR using the methods described by Kaneko et al. [24].

We used selected primers that have been described previously [25] and that corresponded to conserved regions of the various HBV genotypes that flank heterogeneous intervening regions to distinguish between the HBV genotypes. The region selected for amplification also included the amino acid loop corresponding to the a, d/y, and w/r allelic subtypic determinants as well as mutations that have been shown to be related to the HBIg antibody, the anti-HBs monoclonal antibody, and vaccine resistance. The following primers were selected: 1) FHBS1, 5’-GAG TCT AGA CTC GTG GTG GAC TTC-3’;2) FHBS2, 5’-CGT GGT GGA CTT CTC TCA ATT TTC-3’; 3) RHBS1, 5’-AAATKG CAC TAG TAA ACT GAG CCA-3’; and 4) RHBS2, 5’-GCC ARG AGA AAC GGR CTG AGG CCC-3’. The positions in the HBV genome (strain HBVADW; GenBank accession number V00866) to which the primers corresponded were as follows: 1) HBS1F (positions 244 to 267), 2) HBS2F (positions 255 to 278), 3) HBS2R (positions 648 to 671), and 4) HBS1R (positions 668 to 691). Serum samples were treated as described above and subjected to two rounds of amplification sequentially with outer (FHBS1 and RHBS1) and inner (FHBS2 and RHBS2) primers. The amplification conditions for the two rounds of the nested PCR were as follows: initial denaturation at 94°C for 20 s, followed by 30 cycles of amplification at 94°C for 20 s, 56°C for 20 s, and 72°C for 30 s, followed by a final extension step at 72°C for 1 min in a PTC-200 Thermocycler (MJ Research, Watertown, Mass).

Detection of BCP and precore mutants

For the detection of BCP and precore mutants, HBV-DNA-positive samples were amplified by using the primers described by Takahashi et al. [26].

Genotyping, BCP, and precore mutant and pre-S region analysis were carried out by sequence comparison with known sequences from different HBV genotypes that have been previously described and were aligned as described above. The Geneious program (Biomatters, Inc.) was used for genotyping as well as for phylogenetic and molecular evolutionary analyses.

All samples were submitted to HBV DNA quantification using the commercial TaqMan Amplicor HBV assay (Roche Diagnostics), which has a lower limit of detection of 12 IU/L.

For statistical analysis, we used the PASW Statistics software package, version 18.0. Either the χ2 test with the Yates correction or Fischer’s exact test was used to analyze quantitative data and to compare proportions. All calculated P- values were two-tailed and all P-values <0.05 were considered to be statistically significant.

Sequences from the S gene that were acquired during this study were deposited in the GenBank under numbers GU594063-GU594150. Figure 1: Phylogenetic analysis of the genotype of hepatitis B virus isolated in this study.

Prevalence and characterisation of pre-S mutations

Based on direct sequencing, pre-S mutations were detected in only four of the 90 cases (4.4%). All of these cases belonged to genotype C. As for the prevalence of pre-S mutations according to site, pre-S2 deletion was the most common (50%), followed by both pre-S2 and pre-S1 deletion (25%), and start codon mutation (25%). The mean age of patients with a pre-S mutation was significantly higher than that of patients without the mutations (P<0.05). In addition, the mean HBV load in patients with a pre-S mutation was significantly higher than in those without mutants (P<0.05). The alignment of amino acid sequences of the entire pre-S1/pre-S2 region of the four samples is shown in Figure 2. 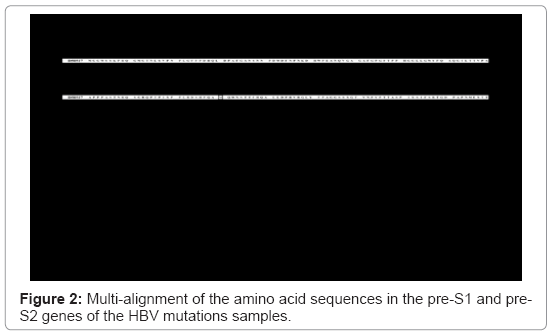 Figure 2: Multi-alignment of the amino acid sequences in the pre-S1 and pre- S2 genes of the HBV mutations samples.

HBV infection is an important global health problem that places a continuously increasing burden on developing countries like the UAE. Molecular epidemiological studies provide valuable information on understanding the prevalence and characteristics of HBV genotypes and mutations from different areas of the world. In this study we confirmed the predominance of genotypes D and A among the HBV strains in the UAE, which accounted for more than 95% of cases. These findings are not surprising; they reflect the typical genotypes circulating in the area.

Genotype C was not a prevalent genotype in this area. HBV genotype C is more commonly associated with severe liver diseases and the development of cirrhosis [27].

The pre-S1 and pre-S2 regions, together with the major hydrophilic region exposed at the surface of HBV particles, are highly immunogenic and potentially under selective pressure by the immune system [28]. The pre-S1 region contains the binding site for HepG2 cells in the liver membrane [2]. The pre-S2 region bears the binding site for polymerised human serum albumen, which is believed to be involved in the attachment of HBV to the human hepatocyte membrane [29]. Therefore, mutations at the pre-S gene might significantly modify the course of HBV infection [30].

Although the occurrence of HBV with the pre-S deletion mutation in liver diseases patients has recently been reported by several groups, its clinical significance has remained obscure [31-34].

Interestingly, our data only showed pre-S mutations in patients infected with genotype C. Taking into consideration that these mutations were predominantly found in genotype C, it is possible that this genotype may be more prone to develop such mutations. Moreover, the mean age of patients with pre-S mutations was significantly higher than that of those without the mutants. This observation also confirmed previous data suggesting that the prevalence of pre-S mutants tends to increase in direct relation to the patient’s age [15,19,35].

Regarding the site of mutation, our report showed that pre-S2 deletion was the most common mutation type. This result is also in agreement with those of recent reports from Japan and Korea [19,35].

In conclusion, our study demonstrates that the HBV genotypes D and A were the predominant strains circulating in the UAE. We also found that the HBV pre-S mutant is very rare in our area and is only in genotype C.