Niacin, the Internet, and Urine Drug Testing: A Cause of Acute Liver Failure

Copyright: © 2013 Eswaran S, et al. This is an open-access article distributed under the terms of the Creative Commons Attribution License, which permits unrestricted use, distribution, and reproduction in any medium, provided the original author and source are credited.

Niacin (Vitamin B3) is a naturally occurring human nutrient found in abundance in meat, yeast, vegetables, and seeds. Deficiencies of this vitamin lead to pellagra and it has also been found to be useful in the treatment of hypercholesterolemia. As the use of niacin has increased, several cases of hepatotoxicity have been reported resulting in the recommendation to initiate treatment with a lower dose and to monitor liver function test. We report two cases of hepatotoxicty in young adults who attempted to pass a drug screening test based on faulty internet advice to use niacin.

Niacin (vitamin B3) is a naturally occurring human nutrient found in abundance in meat, yeast, vegetables and seeds. Originally isolated in the late 19th century, it was not discovered until the 1930’s that deficiencies of this essential nutrient lead to pellagra in man (Figure 1). Subsequently, it has been found to be useful in the treatment of hypercholesterolemia [1] with morbidity and potential mortality benefits [2]. As the use of niacin has increased, several cases of hepatotoxicity have been reported in the literature resulting in the recommendation to initiate therapy with a lower dose of niacin, as well as, to perform continuous monitoring of liver function tests throughout duration of therapy [3]. 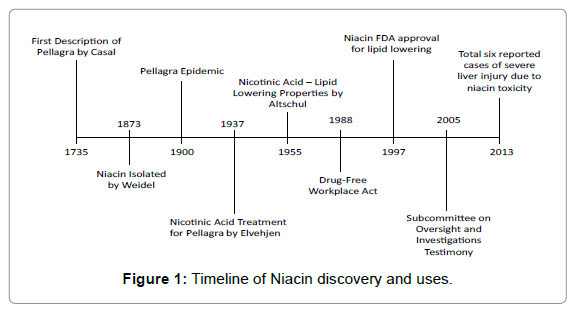 We report two cases of niacin toxicity causing severe transaminitis and liver dysfunction associated with niacin abuse. In both cases, the indication for niacin abuse was to pass a urine drug test for cannabis.

In July 2012, a 20-year-old male with a past medical history significant for attention deficit hyperactivity disorder (ADHD), depression, anxiety and bipolar disease presented to an outside hospital with nausea and emesis after taking niacin to pass a urine drug test for employment. He reported that he read about passing the drug test on the internet with niacin and ingested 15 tablets of Niacin 500 mg over 48 hours. On admission to an outside hospital, his aspartate aminotransferase (AST) was 104 U/L, alanine aminotransferase (ALT) was 105 U/L, and PT-INR was 2.5. The next day, the AST was 2573 U/L, ALT was 2237 U/L and the PT-INR was 5.05. He was subsequently transferred to our hospital. On arrival, he was oriented without evidence of encephalopathy. He was started on N-acetylcysteine and repeat labs revealed an ammonia of 95 mcg/dL, an AST of 4070 U/L, an ALT of 3832 U/L, and an INR of 4.95. His factor V activity level was less than 21% and his factor VII level activity was less than 14%. He never demonstrated evidence of encephalopathy and all of his subsequent labs decreased. The patient was discharged home 3 days later. Of note, his urine drug screen on arrival to our institution remained positive for cannabis.

In September 2012, a 23-year-old male presented to an outside hospital with nausea, vomiting and abdominal pain. He denied any past medical history. The patient initially stated he was taking Niacin 500 mg twice a day as part of an exercise regimen, but later admitted to ingestion in an effort to mask a urine drug screen. His AST and ALT were both greater than 2000 U/L (exact number not given) and his INR was 4.3. He was subsequently transferred to our hospital and found to have an AST of 2903 U/L, an ALT of 4087 U/L, and PT-INR of 1.64. Other labs included an ammonia level of 155 mcg/dL, an arterial lactate of 2.2 MMOL/L, a factor V activity level of 40.9% and a factor VII activity level of 17.9%. His urine drug screen was also positive for cannabis. Similar to the previous patient, he never demonstrated evidence of encephalopathy and all of his subsequent labs decreased. The patient was discharged home 2 days later (Table 1).

Niacin mechanism of action and metabolism

Niacin, or Vitamin B3, is widely available over the counter or as a prescription vitamin supplement, in the form of nicotinic acid or nicotinamide [4]. Both the acid and the amide are precursors to the coenzyme nicotinamide adenine dinucleotide. Niacin decreases all atherogenic apolipoprotein B (ApoB) by inhibiting diacylglycerol acyltransferase 2 (DGAT2) in the liver [5]. This leads to a decrease in production of triglycerides and ApoB. Niacin also increases all anti atherogenicapo lipoprotein AI by inhibiting the HDL apolipoprotein AI catabolism pathway [5]. This leads to an increased production of HDL (Figure 2). 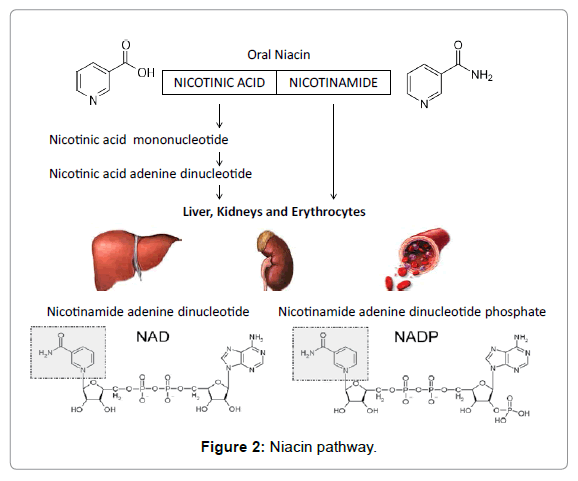 Altschul et al. discovered the cholesterol lowering effects of nicotinic acid in 1955 [1]. Currently, nicotinic acid is available in several formulations: immediate-release (IR), extended-release (ER) and sustained-release (SR) all of which differ in their pharmacokinetic, efficacy, and safety profiles. Conventional nicotinic acid therapy has notable limitations that include flushing, most often seen with IR formulations, and hepatotoxicity, associated with SR formulations. Niacin ER has a delivery system allowing absorption rates intermediate to that of niacin IR and SR [6]. Inositol hexanicotinate (IHN) is often marketed as a “no flush” form of nicotinic acid. Data does not support the efficacy of IHN as a dyslipidemicagent; however there may be some benefit to peripheral vascular conditions, such as Raynaud’s phenomena and claudication [7].

Review of niacin hepatotoxicity in the literature

The recommended dietary intake of niacin is 14 to 16 mg per day. In pharmacological doses for hyperlipidemia (1 to 4.5 g/day depending on the preparation), common side effects of niacin are flushing, nausea, vomiting, pruritus, hives, mild elevation in serum aminotransferases and constipation. A niacin-induced myopathy has also been described with therapeutic doses. Caution should be used in patients with a history of gout due to elevations in uric acid. When less than 1 gram/day of niacinis ingested, only a handful of anecdotal cases of toxicity have been reported in the literature. Severe toxicity reactions are reported in doses of 2 to 6 grams/day. At such high doses, the hepatic metabolism becomes saturated, and side effects of this drug are more frequently encountered. Due to a lower incidence of flushing and convenient dosing frequency, sustained-release (SR) or extended release (ER) niacin preparations are utilized. However, more frequent side effects are common with SR preparations [3,9]. The long-term efficacy and safety of ER niacin was studied in 517 patients in dosages < 3 grams/day used as a lipid lowering agent revealed there were statistically significant changes in hepatic transaminases, alkaline phosphatase, and direct bilirubin, but they were not clinically significant [10].

A case series of five subjects published in 1991 described hepatotoxicity even with low dose or short term niacin [11]. A literature review published in 1992 reports hepatotoxicity in six patients from unmodified niacin, two patients from sustained release and in 10 patients after changing from unmodified to time-release preparations, likely due to ingesting time-release niacin at doses well above the usual therapeutic doses [12].

In an editorial, authors from the Rocky Mountain Poison and Drug Center described their review of poison center’s niacin exposure cases from January to September 2006 and found 16 callers who reported using niacin to mask a drug screen (8 callers), to purify or cleanse their system (6 callers), or as diet pills (2 callers) [13]. These callers were all younger than 30 years. The effects reported included tachycardia, flushing, nausea, vomiting, and abdominal pain. Approximately half the subjects were treated in a health care facility and the other half were treated at home. All subjects recovered with supportive care and none demonstrated evidence of liver failure.

Reports of severe liver injury due to niacin are rare. The first case report of fulminant hepatic failure due to niacin was reported in 1987 in an adolescent taking 3 g per day [14]. Another case of severe hepatitis was described by Dalton et al. in 1992 and two others by Mittal in 2007 with severe hepatitis after niacin taken in excess to mask urine drug testing [15,16].

With this report, there are now six reported cases of severe liver injury due to niacin toxicity, four related to attempts at masking urine drug screens.

In April 1988, the Drug-Free Workplace Act was passed by Congress which mandated that all organizations that receive federal funding maintain a drug free workplace. While this Act did not mandate urine drug testing in all federal organizations, it does require organizations to establish a substance free work environment. Certain federal departments such as the United States Department of Transportation do require random drug testing secondary to safety sensitive occupations such as aviation, trucking and mass transit.

In the above reported cases, both patients took niacin in an attempt to achieve a negative urine drug test for marijuana. When questioned, they both stated that they had read about it on the internet. When one inputs “how to pass a drug test” into the google search engine, 19,500,000 results are available in 0.22 seconds. For example, on the website, www.cannabis.com, there are 40 posts on using niacin to beat the urine drug test with the majority supporting the use of niacin. Both of the patients presented still tested positive in their urine drug screens. In 2005, testimony before the Subcommittee on Oversight and Investigations, Committee on Energy and Commerce, House of Representatives highlighted the issue of the accessibility and legality of products used to defraud drug tests and the legality [17]. Under federal law, it is illegal to sell drug masking product if the products are determined to be “drug paraphernalia”, but there have been no cases of prosecution under this statute. Some states have laws with varied specifics related to the manufacturing, distribution or use of drug masking product.

From a medical stand point, in this era of easy access to clinical misinformation via the internet, clinicians need to be aware of the possibility of internet misinformation as a cause of acute organ toxicity. Other “remedies” to beat the drug tests that are promoted on the internet include drinking massive volumes of water to dilute the urine to get a negative urine drug screen, using prescription or nonprescription diuretics to cause diuresis and dehydration and drinking one to two liters of water mixed with a box of gelatin every hour for four hours. In our case series, niacin was the cause of severe acute hepatic injury with synthetic dysfunction. Awareness of this issue and a careful history taken from patients or their significant others are vital to elicit causes of acute organ failure that may otherwise be missed.