ISSN: 2476-2296
Fluid Mechanics: Open Access
Make the best use of Scientific Research and information from our 700+ peer reviewed, Open Access Journals that operates with the help of 50,000+ Editorial Board Members and esteemed reviewers and 1000+ Scientific associations in Medical, Clinical, Pharmaceutical, Engineering, Technology and Management Fields.
Meet Inspiring Speakers and Experts at our 3000+ Global Conferenceseries Events with over 600+ Conferences, 1200+ Symposiums and 1200+ Workshops on Medical, Pharma, Engineering, Science, Technology and Business

Copyright: © 2015 Kim WH. This is an open-access article distributed under the terms of the Creative Commons Attribution License, which permits unrestricted use, distribution, and reproduction in any medium, provided the original author and source are credited.

21st century needs new paradigm. New paradigm will be initiated from the unexplainable fact. This time it could be water memory which is not explained with current science based on materialism. Biological reaction in the absence of any effective molecules cannot be explained by conventional theory focusing only on the water structure of which the hydrogen bonds last only picoseconds scale.

Although quantum science showed wave part of the matter exist, modern physics focus only on particle. The paradigm of current science is based on particle science, which is materialism. In this article, it is assumed that there is an inherent wave of a matter which is faster than the speed of light and exists stably even after separated from a matter. 3D wave of a matter could exist in water as a field with the shape of the original matter. If 3D wave separated from a matter to water could exist stably and operate like the matter itself, then the interaction between 3D wave separated from hormone to water and a hormone receptor would be possible. If the interaction is fast and good enough to induce cellular signal transduction, there is no need to rely on ‘materialism’ which cannot explain so fast biological reaction. The interaction of 3D wave of the molecule transferred to water with a cellular receptor could lead to intracellular signal transmission, which explains ‘water memory’.

Science pursues truth. However, scientific quest for truth is confined in the frame of a paradigm. Gödel mathematically proved that for any system, there will always be statements that are true, but that are unprovable within the system. There always appear facts which cannot be explained with current paradigm. Such fact can be judged only at higher dimension. Paradigm shift is unavoidable.

21st century needs new paradigm. New paradigm will be initiated from the unexplainable fact. This time it could be water memory which is not explained with current science based on materialism.

The story of water memory begins from homeopathy. Homeopathy uses toxic substance to enhance the ability of natural healing. It is thus very natural that homeopathy tried dilution method with physical stimulation to reduce harmful effect of toxin. What homeopathy found is that even though the poisonous substance gets diluted to the point where the molecule is no longer exist, its effect still remained, which could mean ‘water memory’.

Even though it has been used successfully clinically for over 200 years, homeopathy has been ignored by the orthodox medical circles until now because current science could not explain how a substance’s effect can be shown without actual substance.

However, there have been almost three hundred verification experiments done on homeopathic effects in the past decade. Furthermore, about 80% of those showed that homeopathy have different effects from placebo effect [1].

Although French scientist Benveniste did not know about homeopathy, he was the first to show water’s memorizing ability in scientific way. In 1988 Benveniste and colleagues published a controversial article showing a biological reaction of ultra-high diluted solution (10-120 of its original density) [2], which could be called as ‘water memory’ (Figure 1). Basophil is degranulated by binding of its antiserum to surface and degranulated basophil releases histamine. Basophil is colored blue by the dye called toluidine blue. However, when histamine is released, basophil loses blue color.

In the paper it was demonstrated that human basophil degranulation was triggered by extremely diluted solution (10-120 of its original density) of antiserum where there left no molecule, which could be called as ‘water memory’. This phenomenon was observed only when it is violently shaken at each dilution like homeopathy. Another interesting thing is basophil degranulation showed a phase of rise-fall repetition in the shape of a wave depending on the degree of dilution.

Although Nature allowed publication, a follow-up investigation team was sent to Benveniste’s lab, and they failed to replicate the original results (3 of 4 initial attempts turned out favorable to Benveniste, however 3 more trials after they designed a double blind procedure turned out negative). Benveniste refused to retract his controversial article, explaining that the protocol used in their trial was not identical to him [3]. However, his reputation was damaged and external source of funding was withdrawn. He continued his researches, and published many papers showing water memory effect under various experimental conditions [4-6].

As biological reaction in the absence of any effective molecules cannot be explained by conventional theory focusing only on the water structure of which the hydrogen bonds last only picoseconds scale. The results of Benveniste and colleagues sparked investigations with various seriousness. The most serious one was the research performed double blind by 4 independent European laboratories in 2004 [7]. The interesting fact was the purpose of their double blind test was to disprove Benvensite’s research but instead proved that it was in fact true.

Review of Water Memory After 20 Years

In 2010 a review of the attempts to replicate studies into the activation and inhibition of human basophils with homeopathic dilutions by Ennis was published in the journal Homeopathy [8]. The paper reviewed a list of studies to find out what can be confidently said about the 20 years of research into the subject.

Ennis concluded that there appears to be some evidences for an effect and it is needed to investigate how many of the effects are due to artifacts. She believes that in order to draw the conclusion of homeopathic inhibition of basophil a new multi-center trial would be required. However, all the attempts so far are poorly standardized between laboratories. Most important thing is before such a trial there should be agreement about how to undertake the experiment. Only such an approach might provide a definitive result.

Other than time consuming homeopathic dilution, ‘water memory’ could be reproduced with electronic method using 7.8 Hz, resonance frequency of earth. Subtle magnetic field generated by 7.8 Hz frequency could activate and transfer the wave part of the matter to water. With this device, memorizing ability of water was investigated in my laboratory. P53 protein functions as a potent tumor suppressor. If the molecular structural information of P53 (this wave part of the matter is expressed as ‘3D wave’ throughout this article, as it decreases thermodynamic entropy and maintains 3D structure unlike spreading electromagnetic wave) could be transferred to water, various strategies could be possible. The water to which 3D wave of P53 was transferred actually inhibited cancer proliferation, showed anti-metastasis, and increased apoptosis. The results have been published in the first issue of Journal of Vortex Science and Technology [9].

Nobel laureate Montagnier and colleagues also showed that DNA polymerase could even recognize the 3D wave of specific DNA sequence of HIV transferred to water and produce new DNA copies [10], suggesting that 3D wave of DNA is the physical entity recognizable by DNA polymerase. They also used similar device to ours operating on a 7.8 Hz frequency to transfer the 3D wave of the DNA.

The existence of 3D wave of DNA as physical entity in space was also shown in so called ‘phantom DNA effect’ by Poponin [11]. He showed that scattering pattern of DNA by laser radiation could be regenerated even after DNA sample was removed (Figure 2). 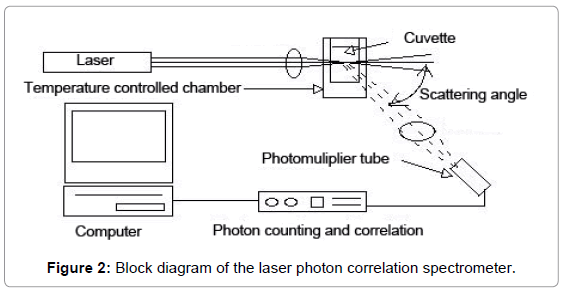 Benveniste thought that there is a wave inherent to the molecule. When the wave propagated from molecule is transferred to a cell receptor through water, the wave can induce resonance of a receptor initiating intracellular signal transmission. The inherent wave of matter is not a new concept. In 1924 de Broglie proposed that every matter has an accompanying wave [12]. De Broglie further suggested that the wave inherent to matter is constantly moving through the matter guiding the trajectory of the particle, and called it as pilot wave [13].

For a positive mass particle which is travelling at vp<c, we see a set of waves moving faster than the speed of light. According to Tiller, pilot waves are always constantly moving through the matter from the rear to the front, just as occurs in water waves, directing the mass particle [15]. Calling such wave as ‘information wave’, as it does not spread out like electromagnetic wave and rather decreases thermodynamic entropy (negative entropy), Tiller suggested mass particles and information wave interacts so as to be experimentally operational. Pilot wave is expressed as 3D wave in this article, as it forms a field with 3D structure by constantly moving around the matter

Tiller suggested that the pilot wave of the matter could be transferred to water by physical stimulation as in homeopathy [15]. If a pilot wave separated from the matter to water still constantly moves faster than speed of light, it would not spread out and decrease thermodynamic entropy. If anything which is not a particle does not spread out and affect other particle, it should be carrying out its effect as a field. Bohm expressed this field characteristic of pilot wave as ‘quantum potential’ which operates as a hidden variable [16].

The structure of the field created by pilot waves in water must not be random. It would be reasonable to think that the field is similar to or at least related to that of the original shape of the matter (expressed as 3D wave in this article).

If the interaction between inherent waves of the matters (3D wave) could lead to cellular signal transmission, there is no need for physical contact between molecules. For example, 3D wave could be separated from a matter and exist in water as a field with the shape of the original matter. If 3D wave separated from a matter to water could exist stably and operate like the matter itself, then the interaction between 3D wave separated from hormone to water and a hormone receptor (actually 3D wave of the hormone receptor) would be possible. If the interaction is fast and good enough to induce cellular signal transduction, there is no need to rely on ‘materialism’ which cannot explain fast biological reaction.

In conclusion, the hypothesis regarding water memory could be summarized as the following: The 3D wave of the molecule transferred to water could exist as a stable entity with a similar field structure to the original molecule and interact with a cellular receptor, and then intracellular signal transmission could be initiated, which explains ‘water memory’.