Copyright: © 2015 Ali, et al. This is an open-access article distributed under the terms of the Creative Commons Attribution License, which permits unrestricted use, distribution, and reproduction in any medium, provided the original author and source are credited.

Lhermitte Duclos Disease also known as dysplastic gangliocytoma is a rare cerebellar lesion first described by Jacques Jean Lhermitte and P. Duclos. It is a benign neoplasm where there is loss of normal architechture of the cerebellar cortex and there is formation of hamartomas. It is often associated with Cowden’s disease which is a phacomatosis characterized by pathognomonic dermatological findings, multiple hamartomas, and a high risk of breast, thyroid and endometrial carcinomas. In this report we have discussed the anaesthetic management of a young female who was diagnosed with Lhermitte Dulcos Disease and was posted for ventriculoperitoneal (VP) Shunting under GA.

An 18 year old girl presented with history of headache and vomiting for 2 years. On examination, she was a conscious, oriented young female of average built, weighing 70 kg with a pulse rate of 66/min, a blood pressure of 110/64 mmHg, restricted neck movement and a motor power of 5/5 in all the limbs. On examination of the oral cavity, she had a normal mouth opening with a thick and large tongue, high arched palate and a mallampati grade III. Her haemogram revealed a haemoglobin of 9.5 gm% with other values within normal limits. Serum electrolyte study revealed, sodium level of 128 meq/L and a potassium of 3.1 meq/L. Renal function tests were within normal limits. MRI study of brain revealed a large, ill-defined infratentorial mass lesion involving the left cerebellar hemisphere extending upto the region of the vermis with widened cerebellar folli and striated appearance, with apparently preserved cortical striations, with obstructive hydrocephalus, periventricular ooze and B/L optic nerve hydrops (Figure 1). A probable diagnosis of Lhermitte Duclos Disease was made. 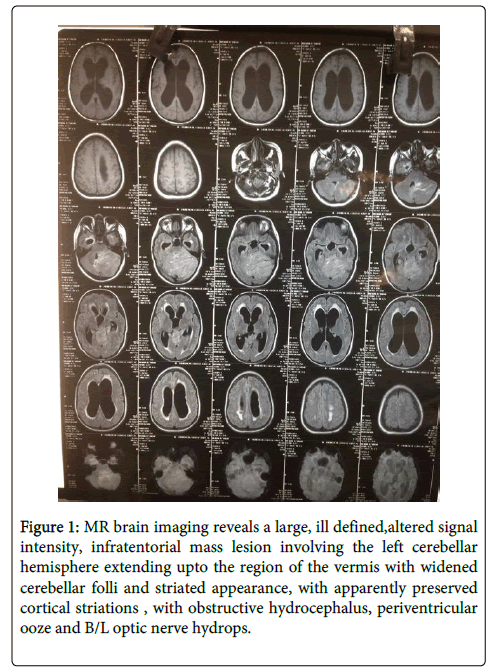 The patient was posted for V P shunting under general anaesthesia as an emergency case. Standard monitors including pulse oximetry, non-invasive blood pressure and electrocardiogram were attached.

Premedication of the patient was done with inj. Dexamethasone 8 mg, inj. Midazolam 1 mg and inj. Fentanyl 100 mcg i.v. Patient was induced with inj. Thiopentone 3 mg/kg iv followed by complete paralysis with inj. Vecuronium 0.1 mg/kg iv. Intubation was done which was confirmed by chest auscultation and capnography. Anaesthesia was maintained with 50% nitrous oxide in oxygen, isoflurane 1%, inj. Fentanyl 1 mcg/kg and inj. Vecuronium 0.03 mg/kg intermittently. Intraoperatively, the patient remained stable. The surgeons performed V P Shunt. Isoflurane was switched off towards the end of surgery. After reversal of the neuromuscular block with inj. Neostigmine 0.05 mg/Kg and inj. Glycopyrrolate 0.01 mg/Kg patient was extubated. Patient was shifted to PACU for monitoring.

Patient had an uneventful stay in the ward but was found to be hypothyroid on further investigations done in the ward. Patient was then referred to endocrinology unit for further management.

Lhermitte Duclos Disease (LDD) is a rare entity first reported in 1920 with about 222 cases being reported till date. The disease usually manifests in young adults, but the age of presentation ranges from birth to the sixth decade. There is no sex predilection [1]. MR imaging usually distinguishes the Lhermitte Duclos Disease by its characteristic “tiger-striped” appearance [2]. Treatment consists of decompression of the posterior fossa by total surgical removal of the tumour mass.

Lhermitte Duclos Disease may be associated with Cowden’s disease which is a rare autosomal-dominant phacomatosis and cancer syndrome. Clinical evidence and the close association of dysplastic cerebellar gangliocytoma with multiple hamartoma-neoplasia complex (Cowden syndrome) favor a hamartomatous origin [3]. It is important for neurosurgeons to recognize the association between this disease and LDD because of the high incidence of systemic cancer in patients with Cowden disease [4]. Cowden disease is characterized by a variety of mucocutaneous lesions, macrocephaly and increased frequency of hamartomas and neoplasia in the breast, thyroid, colon, genitourinary organs, and central nervous system (meningioma and glioma) [1,4-7]. Knowledge of association of this syndrome is essential for management of such cases in terms of associated occult/known malignancies, undiagnosed endocrinopathy, obstructive hydrocephalus and difficult airway during general anaesthesia [8].

The following challenges had to be dealt with in the present case:

A large and thick tongue

Obstructive hydrocephalus due to obstruction of cerebrospinal fluid by the tumor mass mandates strict control of cerebral perfusion pressure. It is important to employ various methods to prevent increase in intracranial pressure during intubation. Cerebral perfusion pressure and intracranial pressure can be well controlled with the use of total intravenous anaesthesia for maintenance during intraoperative period. Generally, the maintenance of anesthesia is accomplished with a balanced technique of opioids, volatile anesthetics and muscle relaxants. All volatile anaesthetics can cause cerebral vasodilation and increase ICP. Isoflurane and sevoflurane appear to have minimal effects on CBF and cerebrovascular reactivity to CO2 in concentrations of 0.5-1.5 MAC (minimum alveolar concentrations) [9,10].

Patients with Lhermitte Duclos Disease may present for various types of surgeries including definitive surgery for tumor removal and surgery to relieve symptoms of obstructive hydrocephalus like V P shunting. It is of utmost importance for the anaesthesiologist to understand the basic problems which one can encounter during managing such cases. Its association with Cowden disease should also be ruled out as these patients might have associated malignancies, endocrinopathies and difficult airway which can be challenging for an anaesthesiologist.