Copyright: © 2015 Ahuja PP. This is an open-access article distributed under the terms of the Creative Commons Attribution License, which permits unrestricted use, distribution, and reproduction in any medium, provided the original author and source are credited.

The Gujarati vowel system is discussed by phoneticians in Gujarat state. However, studies of Gujarati vowel system have not received much attention; compared to the amount of research done on consonants, few studies have been done to analyse vowels. Therefore even the total number of vowels is still being discussed. One reason is that The National Institute of the Gujarati Language seven vowels a, a, i, î, u, u, r were confirmed as monosyllabic, and both /eh/ and /a?/ were admitted as disyllabic too [1]. The total number of monosyllabic differs according to each phonetician [2]. Also in Cho [3], though there are some prescribed monosyllabic in Gujarati, the total number of monosyllabic varies from seven to ten according to each phonetician. In fact, each phonetician has a different claim. Production experiments by Cho [3] on ten vowels were published for Gujarati Language dialect speakers. The results revealed that two vowels are disyllabic and seven vowels are monosyllabic. The most famous study result is undisposed /e/ and /ae/ in Gujarati monosyllabic. In studies, Gujarati dialect speakers had no way of distinguishing /e/ and /ae/ in a perception experiment; Cho [1] and Moon [4] also obtained the same result by production experiment for their research carried out for sui langauage. Thus, the study of Gujarati monosyllabic had focused on /e/ and /ae/ in the past. In recent studies, vowel spaces are paid attention to, including other monosyllabic [1-8], but each side reveals a different result. In the study by Cho [1], the tongue position in vowels /a/ is more front than /a/ by males. In a study of Moon [4], /u/ and /u/ overlapped each other. However, the common results are just /e/ and /ae/; results for other vowels are not overlapping results. Igeta, et al. [3] revealed subsequently overlapped /u/ and /u/ by males, as is the case with Moon [4]. As we mentioned before, these results did not correspond except for /e/ and /ae/.Thus, we conducted measuring formant frequencies (F1, F2) for a few Gujarati dialect speakers. Although we needed many participants for accurate data, we accorded priority to the conditions of participants (age, sex) rather than the quantitative number. The purpose of this study is a comparison of values of formant frequencies (F1, F2) between male [3] and female as a case study.

The utterances of nine Gujarati vowels by native speakers of Gujarati dialect were recorded.

Among the 110 nonsense words recorded by native speakers of Gujarati dialect, seven were monosyllabic /a, a, i, î, u, u, r/, and 80 were combinations of ten Gujarati consonants /b, d, g, p, t, k, s/ (excluding nasal consonants and tense consonants). Twenty-two additional /V/ and /CV/ including /u, u/ were also recorded. These 110 nonsense words were repeated three times by each participant; a total of 330 utterances were recorded. However our targets were only /V/ (/a, a, i, î, u, u, r/) in this study.

The reasons were to avoid any immixing of other noise by the participants’ movement and to enable the participants to concentrate on their utterances. The recordings took place in a sound-proof room (background noise level: 23.3dBA), using a digital sound recorder (Marantz PMD 660) and a microphone (SONY ECM-23F5) at a sampling frequency of 48 kHz and a quantization level of 16 bit.

Our targets were only V (/a, a, i, î, u, u, r/); we measured the vowel formant frequencies by using XKL [5]. Some preparation was necessary before using XKL. First, these utterances were down sampled from 48 kHz to 8 kHz, and the file format was converted from wav to XKL on Linux. Then, we measured three points of first and second formant frequencies (F1, F2) in the steady state of each vowel. We adopted estimated values of formant frequency by linear prediction analysis in XKL.

Additionally, we confirmed it by visual checks. We calculated the distance between origin (0, 0) and each point (F1, F2) on a plane surface of F1-F2 based on the obtained value of F1 and F2 for each of the three points in each vowel. The F1 and F2 pairs that give the median values in the three distances were adopted as the measures of central tendency in each vowel. Finally, we calculated the two-dimensional normal distribution on F1 and F2 values on each vowel, and we plotted iso-probabillity ellipses in such a way that μ ± 3σ (μ: average, σ: standard deviation).

Table 1 presents average F1 and F2 by Gujarati dialect male and female speakers in their 30s. Some data of F1 and F2 of males were taken from Igeta [5].

Table 1: Average F1 and F2 by Gujarati dialect male and female speakers in their early 30s.

First, we discussed individual data; after that, we presented results of the plotted vowel space for female speakers. Especially we focused on three vowel pairs: /i, î/, /u, u/ and /a, a/ [6-8].

In the case of KFS1

Figure 1 indicates the vowel space of KFS1. In the case of KFS1, /u, u/ overlapped completely with [3-5], and /a, a/ overlapped, too. The isoprobability ellipse of /a, a/ overlapped on F2. The reason is the difference of front-back of tongue. This result corresponded to [5]; however, /i, î/ did not overlap, so this result did not correspond to [3,4]. 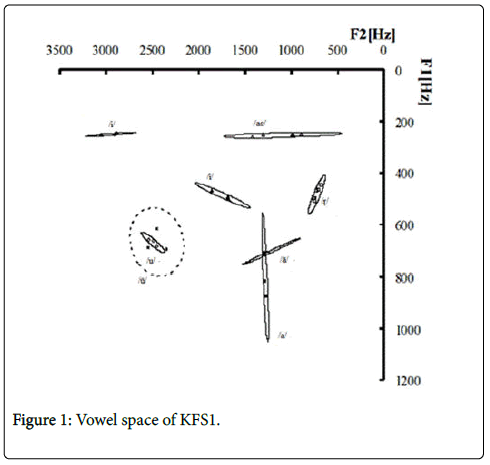 In the case of KFS2

Figure 2 shows the vowel space of KFS2. In the case of KFS2, the /i, î/ overlapped; thus the result is identical with [3-5], but the shape of the isoprobability ellipse of /i/ is very long and thin. The reason is that the difference of height of tongue put in an appearance at value of F1 [9,10]. 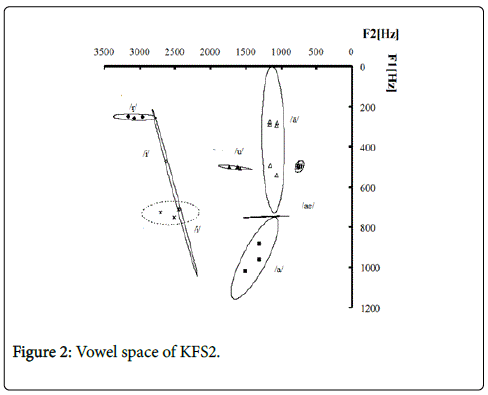 In the case of KFS3

Figure 3 shows the result of the vowel space of KFS3. In the case of KFS3, /i, î/ overlapped the shape of the iso-probability ellipse of /î/ is very thin, because the shape was related to the front-back position of the tongue. However, /u, u/, /a, a/ did not overlap. 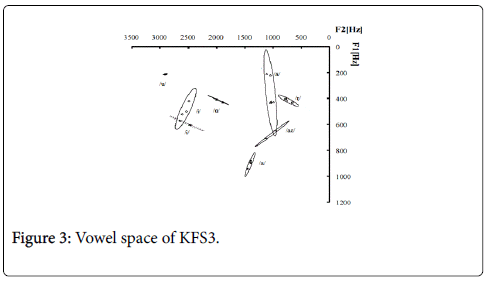 The results are shown in Figures 4 and 5. Figure 4 illustrates the vowel space of Gujarati dialect female speakers in their 30s, and Figure 5 is males’ (Igeta [5]) data [11]. 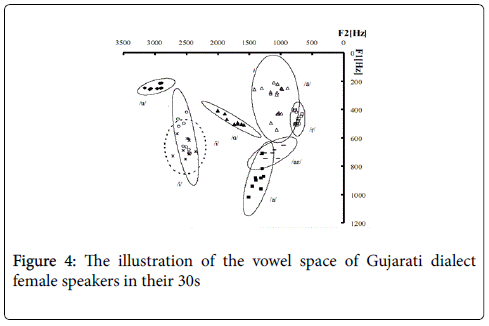 Figure 4: The illustration of the vowel space of Gujarati dialect female speakers in their 30s 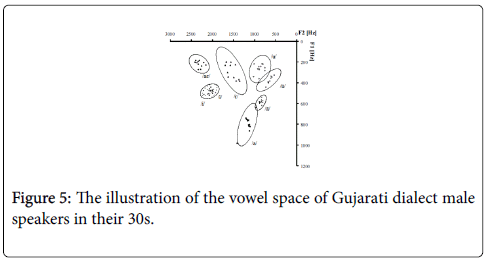 Figure 5: The illustration of the vowel space of Gujarati dialect male speakers in their 30s.

Table 2: Overlapped monosyllabic based on the results of individuals.

Table 2 shows the individual differences that appeared in the result; these covered the results of the previous study totally.

There were basically two results on vowel space. The vowel space of female is larger than male space; however, individual data did not perfectly correspond to the previous studies. The result of overlapped /a, a/ corresponded to Igeta [5]; this result was revealed for the first time there. The results in the present study were consistent with the finding of Igeta [5]. Because of a potential of other overlapped cases for when there were differences between individuals, we need to research native speakers of Gujarati dialect living in Gujarat in the near future. Furthermore, the three vowel pairs overlapped on the iso-probabillity ellipse; however, we have to investigate the overlapping data.

This study work was supported by the Directorate of Forensic Science, Gandhinagar, Gujarat, India.