Copyright: © 2015 Karmakar DB, et al. This is an open-access article distributed under the terms of the Creative Commons Attribution License, which permits unrestricted use, distribution, and reproduction in any medium, provided the original author and source are credited.

Newcastle disease [avian paramyxovirus serotype 1 (APMV-1)] is highly prevalent in poultry thought India. The present study was undertaken to extrapolate the pathogenecity of a field isolate of Newcastle disease virus (NDV) in comparison with velogenic BOM-1 isolate (AY 294125). The field NDV isolate and the BOM-1 isolate were propagated in SPF eggs and the infected allantoic fluids were used for characterization of pathotype. The Mean Death Time (46 hours), Intracerebral Pathogenicity Index (1.74), Intravenous pathogenicity Index (2.01) were enumerated to find out the pathotype of the virus. The field NDV isolate was able to agglutinate mammalian erythroytes except equine RBCs, stable at 56°C for 60 mins and proved to be a rapid eluter. It formed plaques (5.39 x 106 PFU/ ml) in chick embryo fibroblast with characteristic cytopathic effects of velogenic NDV comparable with BOM-1 isolate. The viral proteins that were detected by SDS-PAGE were HN (76 KD), F (66 KD), NP (55 KD) and M (44 KD). The total protein in the field virus isolate was determined to be 18.75 mg%, which was lower than that of the total proteins in BOM-1 isolate (45 mg%). The field virus contained 28.83 mg% of total lipids and 4.98 mg% total carbohydrates, which were more or less similar to that of BOM-1 isolate and that of allantoic fluid. On the basis of all the biological and the chemical tests conducted, the field virus isolate included in this present study was characterized as velogenic viscerotropic strain of NDV.

Newcastle disease (ND) is a severe avian disease of high prevalence and great economic importance in India. It is caused by avian paramyxovirus serotype 1 (APMV-1), which shows variable pathogenicity and severity depending on the virulence of its pathotypes [1]. ND is a single greatest constraint on the production of village poultry [2-4]. Serological surveys indicate the presence of the virus in village poultry in countries throughout Asia and Africa, and where virus isolation has been attempted; virulent strains have been found [5]. Geographical distribution of NDV is often confused due to the indiscriminate use of live vaccines in most of the countries throughout the world [6]. Therefore, zone wise proper characterization of the strains of NDV with effective and validated pathotyping is required for planning of an effective control programme against this disease. In this perspective, the present study was carried out using several pathotype determining tests which were conducted to characterize a field NDV isolate of poultry in comparison with a standard velogenic strain of NDV (“BOM-1 isolate” bearing accession No. AY294125).

NDV was isolated from a severe outbreak at a poultry farm (mortality-89.13%) in the Konkan (latitude-17°N and longitude- 73°19’E) region of Maharastra in the year 2007. The spleen and liver of the dead birds were aseptically collected in sterile antibiotic supplemented medium (MEM-199, Sigma) and dispatched in chilled condition to the Department of Microbiology, Bombay Veterinary College. The samples were aseptically triturated with Phosphate buffer solution and a 10% suspension was made. Thereafter, the solution was passed though syringe filter (pore size 0.22 μm) and 0.1 ml of the filtrate was inoculated aseptically in 10 days old embryonated Specific pathogen free (SPF) eggs (Venkateshwara Hatcheries Ltd., Pune). The eggs were incubated at 37°C for virus propagation. After the death of the embryos allantoic fluid was aseptically collected, pooled, and stored in -20°C for further use. BOM-1 isolate (accession No. AY294125) was obtained from Department of Microbiology, Bombay veterinary college. R2B-Mukteshwar and LaSota Standard Vaccine Stains were purchased from Hester pharmaceuticals Ltd, India.

The infected allantoic fluid was subjected to Haemagglutination test and further embryo infective dose of the virus was estimated. The mean death time (MDT) of the virus was calculated in SPF chick embryos of ten days of age according to the method of Hanson and Brandley [7]. The intra cerebral pathogenicity index (ICPI) and intravenous pathogenicity index (IVPI) were enumerated according to the method of Allan et al. [8] in SPF chicks (Gallus domesticus). The chicks used in the experiment of ICPI and IVPI were day-old and eight-weeks-old respectively and were purchased from Venkateshwara Hatcheries Ltd., Pune. The experimental procedures and care of animals were approved by the Animal Experiment Committee of National Institute of Animal Health.

Biological characterization of the virus

The thermostability of haemagglutinin of the infected allantoic fluid was tested after heat treatment at 37°C ± 0.5°C, 56°C ± 0.5°C, 60°C ± 0.5°C for selected time periods. Thereafter, the corresponding HA titer and infective titer in SPF eggs of the heat treated allantoic fluid was enumerated. The neuraminidasae activity of the field virus isolate was assessed by testing the haemagglutination elution patterns in which the time required by the virus to completely elute from the agglutinated chicken erythrocytes was recorded at 4°C. The ability to agglutinate mammalian erythrocytes was checked by using 1% suspension of erythrocytes from guinea pig, sheep, goat, cow, rabbit, horse and 0.5% suspension of pig erythrocytes. Plaque formation on primary chick embryo fibroblast cell culture was used to differentiate between the strains of the virus. Plaque assay was carried out as per method of Barahona and Hanson [9] for the demonstration and titration of NDV in primary chicken embryo fibroblast (CEF) culture in a 24 well tissue culture plate. Tenfold dilution (10-1 to 10-13) of the virus was made in PBS and infected in CEF monolayer following which cell layer was overlayed with 1.5% agarose. The tissue culture plate was incubated at 37°C and kept under observation for formation of plaques upto 96 hours. The monolayers were stained with 0.01% neutral red and plaques were observed for their differential characteristics under an inverted light microscope.

The molecular weights of the electrophoretic protein fractions of freeze dried field NDV isolate were studied by sodium dodecyl sulphate-polyacrylamide gel electrophoresis as per the method of Moore and Burke [10]. The total proteins, lipids and carbohydrates of the freeze dried virus were estimated by modified Lowry’s method [11], Knight method [12] and Ada and Gottschalk method [13] respectively. Further, all of the above stated chemical properties of the field virus isolate of NDV were compared with BOM-1 isolate, R2B and LaSota. All the chemicals used in these tests were purchased from Bangalore Genie and S.D. Fine Chemicals limited.

Comparison of pathogenicity and biological properties of the viruses

The results of haemagglutinating titers, embryo infective dose, MDT, ICPI, IVPI, thermostability of haemagglutinin, rate of elution, agglutination of mammalian erythrocytes and plaque forming unit per ml of the propagated field virus isolate and the BOM-1 isolate are shown in Table 1.

Table 1: Showing the comparison of the biological characteristics of field virus isolate and BOM-I isolate. 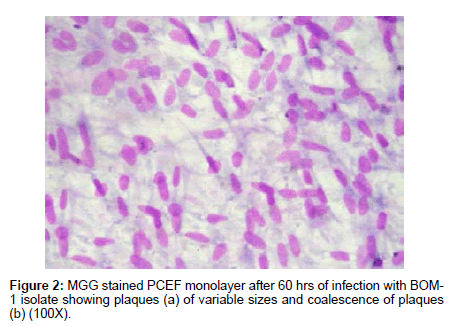 Figure 2: MGG stained PCEF monolayer after 60 hrs of infection with BOM- 1 isolate showing plaques (a) of variable sizes and coalescence of plaques (b) (100X). Figure 4: MGG stained PCEF monolayer after 72 hrs of infection with BOM-1 isolate showing syncytia (a) and cytoplasmic vacuoles (b) (400X). Comparative chemical characteristics of the viruses 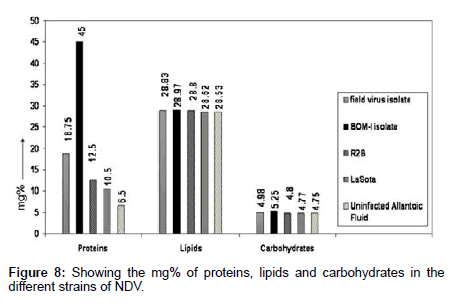 The estimation of total proteins, lipids and carbohydrates of NDV field isolate in comparison with BOM-1 isolate, LaSota, R2B and uninfected allantoic fluid is shown in (Figure 8). Figure 8: Showing the mg% of proteins, lipids and carbohydrates in the different strains of NDV.

The values of MDT, ICPI and IVPI suggest that the field virus isolate was a velogenic strain of NDV. Further these results are in conformity with the positive control (velogenic BOM-1 isolate) and meet the specifications of OIE [15]. In both ICPI and IVPI tests all chicks except the controls showed characteristic symptoms resembling velogenic viscerotropic strain of NDV. The chicks subjected to ICPI revealed torticollis, paralysis of legs and weakness prior to death. Whereas, pinpoint haemorrhages in the proventriculus and caecal tonsils were observed in both of the groups (intracerebrally inoculated groups in ICPI and intravenously inoculated groups in IVPI). These findings are in conformity with Pant et al. [16] and Vijayarani et al. [17]. Further MDT, ICPI and ICPI values indicate that the field virus isolate was less virulent than BOM-I isolate. From the results of thermostability of haemagglutinin, the field virus isolate was found to be thermostable as velogenic BOM-I isolate of NDV. For instance, the velogenic isolates characterized by Roy et al. [18] remained thermostable for at least 90 minutes whereas the lentogenic isolates, characterized by King and Seal [19], lost their haemmaglutinating activity within 15 minutes. On the basis of haemagglutination elution patterns, the virus can be classified as a “rapid eluter”, indicating higher neuraminidase activity. As the rate of elution appeared to be independent of other viral properties, it can serve as a marker for differentiating strains of NDV [20]. Diversities in plaque morphology in NDV infected PCEF monolayers is a distinct characteristic of velogenic stain of NDV as observed by Schloer and Hanson [21]. The cytopathic effects observed in the infected cell layer in this present study were characteristic of velogenic strain of NDV. The replications traits of viruses as observed in the cytopathogenicity study revealed that the BOM-I isolate replicates faster in PCEF and are more cyto-lytic as well as lethal to the cells. The protein profile of the field isolate, BOM-I isolate, LaSota and R2B suggested no alterations in structural proteins of these strains of NDV [22]. As v-NDV is an enveloped virus, it is composed of lipids, carbohydrates and proteins. The strain-to-strain variation of virulence of NDV may be attributed to the little differences in viral proteins, lipids and carbohydrates. These results in this present study indicate that the field virus isolate, BOM-1 isolate, LaSota and R2B contained greater amount of total proteins than that of uninfected allantoic fluid suggesting that the increased values probably represented proteins of viral origin. Moreover it was found that the total proteins in the field virus isolate was lesser in amount than that of BOM-1 isolate but greater than that of the vaccine strains of NDV viz. LaSota and R2B. The total lipids and carbohydrate contents of all the NDV strains were found to be more or less similar to that of uninfected allantoic fluid. It is because lipids and carbohydrate of the host material are incorporated in the viral envelope during maturation and budding [23].

On the basis of the results of pathotype specific tests viz. MDT, ICPI, IVPI, agglutination of mammalian RBCs, thermostability of haemagglutinins, rate of elution and ability to form plaques in CEF, the field isolate of NDV in the present study can be classified as a velogenic Viscerotropic strain. The field isolate was found to be a less virulent than the standard velogenic isolate BOM-I. The present study clearly demonstrates that MDT, ICPI and IVPI are most efficient tools for strain differentiation of NDV in epidemiological point of view. The comparative pathobiology of field NDV isolate and BOM-I isolate in gallinaceous poultry was clearly correlated with biochemical properties of virus and cytopathogenicty in PCEF.

The work of D. B. Karmakar was fully supported and funded by the Bombay veterinary college, Maharshtra Animal and Fishery Sciences University, Nagpur. India.