Copyright: © 2015 Jha DK, et al. This is an open-access article distributed under the terms of the Creative Commons Attribution License, which permits unrestricted use, distribution, and reproduction in any medium, provided the original author and source are credited.

Rhino horn is hard, elongated, conical structure composed entirely of keratin but lacking bony core. Illegal trade of rhino horn has high financial rewards. Both genuine and fake horns are confiscated by authorities and sent for identification. Various morphological and microscopic features of 214 genuine horns of one horned Rhino (Rhinoceros unicornis) stored at Armed Forest Protection Training Centre, Tikauli and Office of the Chitwan National Park, Kasara, Nepal were studied. The studied morphological parameters were color, surface texture, height, mass, basal circumference, frontal groove, basal elevation, porosity, light penetration capability at the base and density. Similarly, microscopic features like shape, size and frequency of filamentous units, Interfilamentous space, ratio of medulla and filamentous unit and laminae were studied after thin transverse sections made from the tip of 140 genuine horns. Some of these features were compared with that of 65 fake horns which were received in the laboratory and identified as fake samples. The distinctive filamentous units were observed in all studied genuine rhino horns with varied number, shape and sizes. Based on this study, identifying features of genuine rhino horns were properly established. The study also reveals the possibility of approximation of maturity of rhino horns.

In general, printing press is awarded as the most valuable and prestigious boon for the intellect world and invention which caused the human race to see and feel the essence of twenty first century in real sense. The printing involves machinery, dyes, solvents, papers etc. out of which the solvent is the most interesting object for fire investigation. Now-a-days Toluene, Ethyl acetate, Ethyl Alcohol etc. are primarily used as solvent in printing. Ethyl acetate is very volatile and flammable material which has flash point at -4°C temperature. Flash point of any liquid material is the temperature at which it gives sufficient vapor to be ignited by the external source as match stick, electrostatic discharge, lighter etc. These liquids are generally stored in large commercial containers or drums from which the liquid is drained out in user’s small service tank with the help of air pump as these pumps can damage the seals of normally used liquid pumps. The pressurized air from air pump becomes electro-statically charged due to mutual friction or friction with the machinery used to pressurize the air which can be discharged through any object e.g. human being or any metallic object grounded/ oppositely charged, this is the similar mechanism as the mechanism of comb and hair. Storage tank and service tank both should be properly grounded to overcome this electrostatic charge.

The incident happened in Parle biscuit factory Nimrana (Rajasthan) on 29.10.2009 in the printing section where wrappers of biscuit packing were printed. This section was utilizing Ethyl acetate and other inflammable chemicals as solvent and other purposes. The incident happened in working hours and day but thanks to god and other safety precautions that fire could not hunt any human life, beside massive property loss though three laborers were scalded and got mild burning. FSL mobile unit was called for finding the reason of fire, as no obvious reason was present in front of police and manager of the factory. Forensic experts’ team scrutinized the whole place and gathered some very useful information which provided the answer of the cause puzzle of the fire fire [1-3].

Everything was moving smoothly in the factory at the time of arrival of Forensic experts’ team (31-10-09) like nothing was happened but it was the peace after the storm. Every item in the printing section was being used but with the signature of the fire. The origin and seat of fire were swept and cleaned from the surface. Fire extinguisher and sand buckets were relaxing at their proper places after a very hard day. Electrical short circuit and electrical spark after keen observation can easily be rule out as the cause of fire since every electric line and equipment were working properly. The laborers were not allowed smoking and smoking materials inside this section. No foreign material could be detected inside the region after through examination. Now come into the scene the only possible villain might be electrostatic discharge. Ethyl acetate which was being used as solvent was stored in drums and drained out into the service tank with the help of air pump. Service tank was enjoying the ride of iron trolley having rubber tires making the trolley totally insulated from ground (Figure 1). Burn mark and soot deposition was found on the service tank and outlet of the air pump. Service tank has burn mark only on upper inner side near the edges and lid; suggest the role of some volatile liquid (Figure 2). Nothing seemed wrong up to this point. If nothing went wrong then why this havoc happened? Right this is the time to take some deep consideration about the conspiracy of electrostatic discharge. Our first testimony was provided by ethyl acetate itself by providing its character as highly volatile, flammable and having flash point -4°C quite alarming. Figure 2: Showing the burning marks near the upper inner edge.

Now, the iron trolley insulated by rubber tires was interviewed for grounding facility if any and provided the information that normally a iron chain is attached with the trolley to ground any electrostatic charge generated in air pump and service tank during its journey but if it was grounded than electrostatic charge goes in background, so the team decided to go to hospital where the laborer working on the trolley was admitted after mild burning. The laborer revealed the truth after questioning that on the day of incident he forgot the chain to attach with trolley in its place. Now it seems a crystal clear that an omission of putting the chain to ground the service tank was the cause behind the incident (Figure 1).

The liquid (Ethyl acetate) was sent to State Forensic Science Laboratory, Jaipur for confirmation and flash point examination which got positive response from the laboratory (Figure 2).

The pressurized Ethyl acetate was released as jet in to service tank by the outlet of air pump. Air pump compresses the air to pressurize it to get the liquid out of the drum, during this air get quite turbulent flow and bear much mutual friction to friction with the wall of air pump which generates a lot of electrostatic charge. This electrostatic charge get transferred to service tank and get accumulated with time as trolley and service tank are totally insulated from the ground due to the omission of the grounding chain. This accumulated electrostatic charge becomes large enough with time to generate a high electric potential difference some what like capacitor which can be discharged through any object nearby grounded/not charged or oppositely charged like barefoot person, pole etc. Discharging of electrostatic charge generates a discharging spark which is quite sufficient to ignite the vapor of Ethyl acetate present near the mouth of the service tank since it is highly volatile, flammable and having flash point -4°C. Now control goes to fire through Ethyl acetate as growing temperature causes more vapor causes more fire and circle goes on till after some time other chemicals and objects present in the printing section come in to roll by supporting the fire which was finally vanquished by the fire fighters. A small omission done in hurriedness caused this incident costing millions of property but fortunately no human life. In the flow chart shown in Figure 3 which is a result of thorough study of the reference literature [4], is developed for the sack in the help of the investigator to examine the fire crime scene in five steps. The flowchart has five steps. i.e. STEP 1, one should have the knowledge of dynamics of fire and on which factor the fire development is depend and spread. In STEP 2, the crime scene investigator (CSI) or forensic expert has to examine the crime scene like char pattern, colour of smoke, colour of flame and residue parts etc. Inductive reasoning with all of the collected and observed information should be done in STEP 3. On the basis of data analysis, investigators should develop a hypothesis to explain the origin and cause of fire and test of the hypothesis in STEPs 4 and 5 (Figure 3). 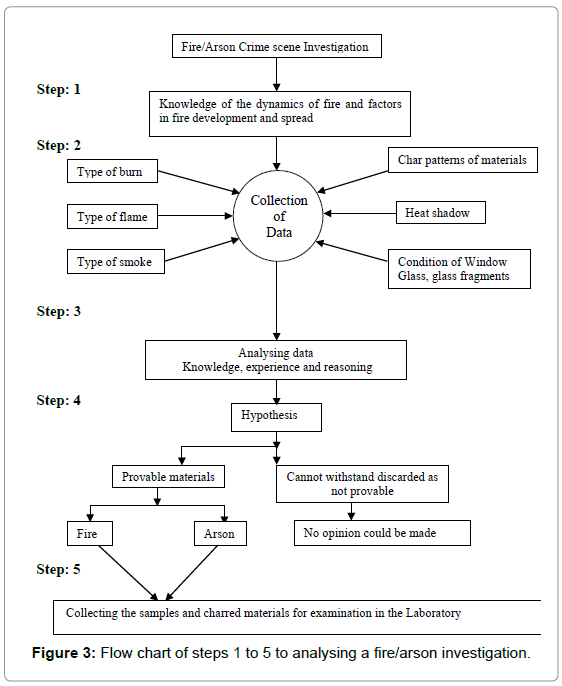 Figure 3: Flow chart of steps 1 to 5 to analysing a fire/arson investigation.