Copyright: © 2015 Ogata T, et al. This is an open-access article distributed under the terms of the Creative Commons Attribution License; which permits unrestricted use; distribution; and reproduction in any medium; provided the original author and source are credited.

Methods: Ten patients with nasopharyngeal and oropharyngeal cancer were chosen for this planning comparison study. Three treatment plans (dual arc FFF-VMAT, dual arc FF-VMAT, and HT) were created for each patient. The three prescription dose levels of the planning target volumes were 69.96, 60, and 54 Gy in 33 fractions, using the simultaneous integrated boost technique. Comparisons of the plan quality were performed by analyzing the homogeneity, conformity, dose to the organs at risk (OARs), the number of monitor units (MUs), and beam-on time (BOT) necessary for delivering the plans.

Conclusion: We here present the first report of FFF-VMAT achieving a comparable plan quality with less delivery time to that of FF-VMAT and HT in head and neck cancer. FFF-VMAT is a highly efficient and feasible option for the treatment of head and neck cancer in clinical practice.

Flattening filter-free (FFF) beams have recently become available for commercial c-arm linear accelerators. The advantages of FFF beams include a reduced peripheral dose as a result of lower head scatter and leakage, and less variation in the energy spectrum in the off-axis position compared to flattening filter (FF) beams [1]. Furthermore, another advantage of FFF beams is the shortened delivery time necessary for delivering plans, owing to the increased dose rate [2].

However, there are currently no published studies comparing FFFVMAT with FF-VMAT and HT, which is widely applied in clinical practice for the treatment of head and neck cancer. In this study, we examined the differences in dose distribution and treatment delivery efficiency between FFF-VMAT, FF-VMAT, and HT for head and neck cancer treatment.

We recruited 10 patients with head and neck cancer (5 with nasopharyngeal cancer and 5 with oropharyngeal cancer) treated with HT (Accuray Inc., Sunnyvale, CA.) between June 2013 and December 2014. All patients were immobilized using a thermoplastic mask, and computed tomography with 2.0 mm slice thickness was performed from the skull vertex to below the clavicles for treatment planning. The prescription doses at D95 (dose covering 95% of the volume) were 69.96, 60, and, 54 Gy in 33 fractions to the high-dose, intermediatedose, and low-dose planning target volumes (PTV), respectively. Each PTV was trimmed up to 2 mm from the skin surface. The organs at risk (OARs) included the brain stem, spinal cord, eyes, lens, optic nerves, optic chiasm, parotid glands, inner ears, oral cavity, larynx, mandible, esophagus, and brain. A planning risk volume of 3 mm in every direction was created around the spinal cord and around the brain stem. The following dose constraints based on the RTOG 0225 protocol were set on the OARs: maximum dose for the spinal cord: <45 Gy; maximum dose of the brain stem: <54 Gy; mean dose for at least one parotid gland: <26 Gy [11]. The optimization parameter of PTV and OARs for treatment planning is shown in Table 1. This study was conducted under the regulations of the Institutional Review Board of our institution.

The treatment plans were performed using Eclipse (version 11.0.31, Varian Medical Systems, Palo Alto, CA) for delivery on TrueBeam (Varian Medical Systems). The dose calculation algorithm used was the anisotropic analytical algorithm with a dose calculation grid of 2.0 mm. All RapidArc treatment plans were created with 2 full arcs for 6 MV photons. The maximal dose rates were set to 600 MU/min for FFVMAT and 1400 MU/min for FFF-VMAT. The collimator angle was typically set to 45° to avoid tongue-and-groove effects.

The treatment plans were optimized in a Planning Station (version 5.0.1 or higher, Accuray Inc., Sunnyvale, CA) using a collapsed cone convolution dose calculation algorithm with a 2.0 mm calculation grid resolution. The HT plan parameters consisted of a 2.5 cm field width, 0.287 pitch (ratio of the distance travelled by the treatment couch per rotation to the fan beam thickness), and 1.8-2.5 modulation factor (maximum leaf intensity divided by average leaf intensity). The nominal dose rate at the isocenter was approximately 850 cGy/min.

Quantitative evaluation and comparison of the plans were performed based on cumulative dose-volume histograms (DVHs). For the PTV, the homogeneity index (HI) and conformity index (CI) were used as comparison metrics between FFF-VMAT, FF-VMAT, and HT plans. HI was defined as (D2%-D98%)/D50%, where D2%, D98% and D50% indicate the doses received by 2%, 98%, and 50% of the volume, respectively [12]. CI was calculated as Vpi/PTV, where Vpi, and PTV represent the volume receiving a dose equal to or greater than the prescribed dose and PTV volume, respectively [13]. In the evaluation of the OAR dose, the maximum point doses to the spinal cord and brain stem were determined, and the mean doses to the parotid gland, larynx, and body were recorded. Moreover, we calculated the integral body dose [14]. Finally, the number of MUs and the beam-on time (BOT) were evaluated for comparisons of the delivery efficiency.

Comparison between pairs of groups was performed using the nonparametric Mann-Whitney U test due to the small sample number [15]. A p-value of <0.05 was considered to indicate statistical significance.

The typical dose distributions obtained using FFF-VMAT, FFVMAT, and HT are presented in Figure 1. Figure 2 shows the average cumulative DVHs (10-patient average) for the PTV and OARs. Table 2 summarizes the results of the statistical analyses for the difference in the PTV, OARs, and delivery efficiency between the three techniques. 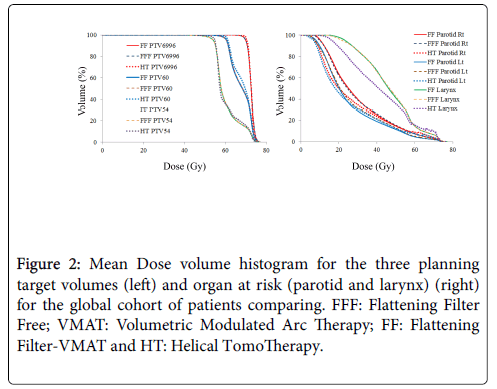 In recent years, there has been an increasing interest in conventional c-arm linear accelerators using FFF beams. The benefits of FFF beams include reduced head scatter, head leakage, and residual electron contamination [1].

Furthermore, many researchers have shown that FFF-VMAT might allow OAR dose reduction without sacrificing target dose coverage in comparison with FF-VMAT [8-10]. However, all of these previous reports focused only on the comparison between FFF and FF beams obtained from conventional c-arm linear accelerators, and the present study is the first report regarding the dosimetric comparison of FFFVMAT relative to FF-VMAT and HT, which is already widely used in clinical practice for head and neck cancer. When new radiation therapy delivery techniques are applied, they should be assessed by comparing them to clinically widespread technologies. Herein, we demonstrated that FFF-VMAT for head and neck cancer resulted in equivalent plan quality compared with FF-VMAT and HT. Zhuang et al. reported that FFF-VMAT for nasopharynx cancer showed inferior conformity and heterogeneity for PTVs in comparison with FF-VMAT [16]. Moreover, the dose sparing of OARs (parotid, brain stem, etc.) with FFF-VMAT were poorer than those of FF-VMAT. The authors speculated that the reason for this phenomenon might be due to the use of rather large field sizes and complex target volumes. However, our data showed that FFF-VMAT achieved comparable plan quality to that of FF-VMAT. The homogeneity and conformity for PTVs were similar between the FF-VMAT and FFF-VMAT plans. In terms of the OARs (cord brain stem, parotid, and larynx) sparing, no significant differences were observed between FF-VMAT and FFF-VMAT in this study. This phenomenon may be related to the different settings of the objective parameters of the target and OARs. We found that the maximum dose of the spinal cord in HT was significantly lower than that in FFF-VMAT, which is consistent with the previously published reports [17,18]. Meanwhile, in contrary to our results, other researchers have shown that the maximum cord dose for HT is either equal to or higher than the FF-VMAT data [19,20]. Moreover, Lu et al. reported that FF-VMAT provided better parotid sparing in comparison with HT while our study showed HT plans tended to be slightly better [20]. The reason for this discrepancy is likely because it is not possible to determine precisely the same planning objectives as a result of using different optimization algorithms of the different planning systems.

FFF beams contribute to time-efficient treatment delivery because of a higher dose rate. However, our data demonstrated that FFFVMAT shows no advantage in terms of the treatment delivery efficiency compared to FF-VMAT. Although using a larger dose per fraction increases the benefit of reduction in the delivery time, the benefit of a standard fractionation dose with 2 Gy is not significant [2]. The reason for this observation is that the VMAT BOT is governed mostly by the gantry rotation speed and not the dose rate.

Of note, the MUs for FFF-VMAT were always higher than those for the FF-VMAT, owing to following reasons: 1) the lateral dose profiles of FFF beams show a significant difference from those of FF beams; 2) the intensity of FFF beams decreases with increasing off-axis distance; and 3) larger field sizes for FFF beams correspond to higher peaks. Although our data showed that FFF-VMAT required a higher number of MUs in comparison with FF-VMAT, the mean body dose for FFFVMAT was equivalent to that for FF-VMAT, which is consistent with previously published results [10]. A possible explanation for these findings is that FFF beams provide a lower head scatter and electron contamination compared to FF beams.

Moreover, HT exhibited a higher mean body dose compared to FFFVMAT and FF-VMAT, although this was not statistically significant. Several studies have reported that the normal tissue integral dose for HT is significantly higher than that for VMAT [21,22]. In recent years, HT has offered a dynamic jaw delivery mode that reduces longitudinal dose spreading in addition to a conventional static jaw delivery mode, and Sterzing et al. reported that the dynamic jaw mode resulted in reduction of the mean integral dose compared to the conventional static jaw mode [23].

There are several potential limitations of our study. One issue is that our study was performed in a relatively small number of patients, and thus, further rigorous large-scale studies are warranted. Moreover, as mentioned above, it is difficult to determine precisely the equivalent constraint parameter settings due to the usage of different treatment planning systems and optimization algorithms for a planning comparison study [14]. However, this dosimetric comparison might bring several insights of the differences of each method, despite these limitations.

This is the first report of FFF-VMAT achieving equivalent plan quality to that of FF-VMAT and HT while saving treatment time in head and neck cancer. Although some significant differences in the dosimetric parameters were observed, they remained small and probably have no, or very limited, clinical impact. Our results indicate that FFF-VMAT for head and neck cancer is an efficient and feasible strategy for clinical practice.

This work was supported by the Grants-in-Aid for Scientific Research 15K19204 by Japan Society for the Promotion of Science.