Copyright: © 2016 Weltman JK. This is an open-access article distributed under the terms of the Creative Commons Attribution License, which permits unrestricted use, distribution, and reproduction in any medium, provided the original author and source are credited.

The current epidemic of Ebola virus disease (EVD), caused by the Zaire Ebola virus ZEBOV-Makona variant, has killed more than 11,000 people since it began in 2014 (http://apps.who.int/ebola/currentsituation/ ebola-situation-report-20-january-2016). The receptor binding domain (RBD), extending between amino acids 54 and 201 of the viral glycoprotein (GP) sequence, mediates the binding of the virus to the target cell [1].

Presented here is an analysis of the biology of the ZEBOV-Makona GP RBD based upon the following four factors: information entropy, protein conformation, amino acid thermal flexibility and linear epitope activity. It is proposed that the simultaneous consideration of these factors leads to insights that can facilitate the design of effective anti- Ebola vaccines.

The entire dataset (n=965) of full-length (676 amino acids) ZEBOVMakona variant GP protein sequences was downloaded via the NCBI Ebolavirus Resource (http://www.ncbi.nlm.nih.gov/genome/viruses/ variation/ebola) on 21 Dec 2015; 94.09% of these sequences (n=908) were found to be free of error amino acids and were satisfactory for use. The RBD, ranging from GP amino acid 54 to GP amino acid 201 (length=148 amino acids), inclusively, was utilized for this study [1]. The amino acid numbering system of the full-length, intact GP was used for the RBD in this report.

Computations and graphing were performed with Anaconda 2.4.0 (64-bit), Python 2.7.10, Numpy 1.10.1, Scipy 0.16.0 and matplotlib 1.4.3. Consensus sequences were determined with Jalview (2.9.0b2) [2]. Information entropy (H) was computed with the equation of Shannon [3]. Three dimensional conformation of the GP consensus sequence was determined by homology modelling with RaptorX [4] and visualized with CCP4mg 2.10.4 [5]. Local thermal motion, expressed as the Debye-Waller B factor [6] was obtained from the PDB protein conformation files produced by RaptorX. Predicted linear epitope scores were obtained with Bepipred [7]. Z-tests were performed using 1000 pseudo-random trials and reported with two-tail probabilities. 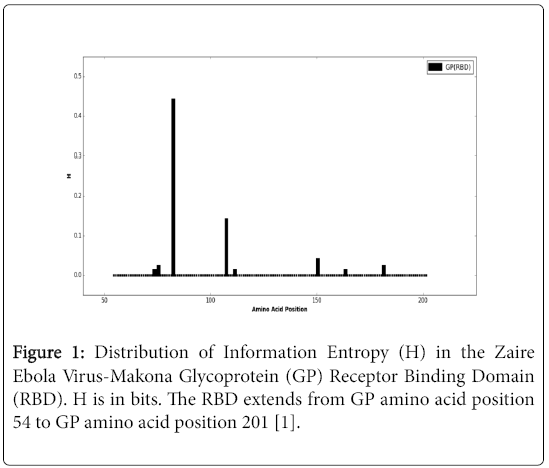 The spatial conformation of the ZEBOV-Makona GP RBD is shown in Figure 2 for subset V82 RBD (Figure 2A) and subset A82 RBD (Figure 2B). In both cases, there is an alpha helix structure ranging from amino acid 79 to amino acid 83, with no other alpha helices observed within either of the subset RBDs. 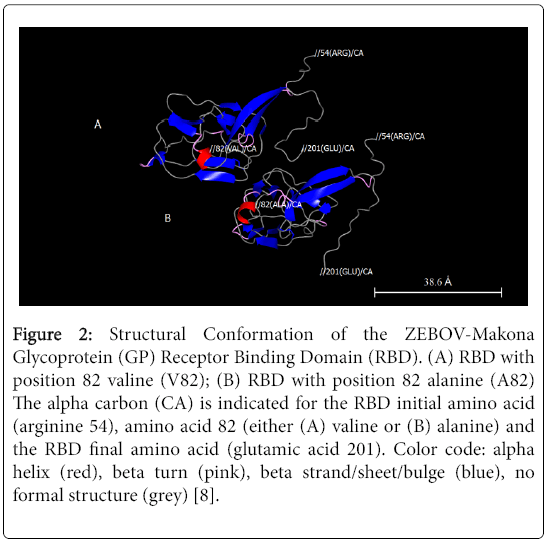 Table 1: B Factor Distribution in the Alpha Helix of the GP RBD. B factor is measured in Å2 units. Z-tests were performed with 1000 pseudo-random trials; two-tail p-values are reported. 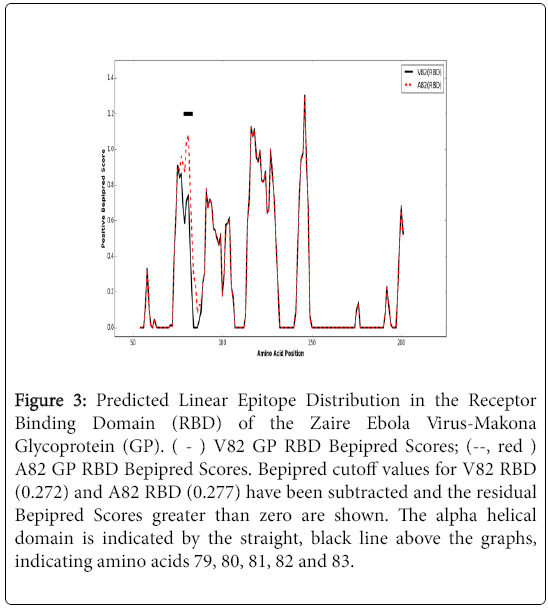 Figure 3: Predicted Linear Epitope Distribution in the Receptor Binding Domain (RBD) of the Zaire Ebola Virus-Makona Glycoprotein (GP). ( - ) V82 GP RBD Bepipred Scores; (--, red ) A82 GP RBD Bepipred Scores. Bepipred cutoff values for V82 RBD (0.272) and A82 RBD (0.277) have been subtracted and the residual Bepipred Scores greater than zero are shown. The alpha helical domain is indicated by the straight, black line above the graphs, indicating amino acids 79, 80, 81, 82 and 83.

Information entropy (H) within a peptide component of a virus may be regulated by conformational features of that peptide, by the immune response of the host against epitopes within that peptide, and by yet other factors [9]. A conformationally helical peptide would be expected to apply structural constraints [10] upon the occurrence of mutations within that peptide; however, the maximum value of H in the RBD occurred within an alpha helix, despite such structural constraints (Figures 1 and 2). A maximum value of H, despite structural constraints of the helix, may reflect a vigorous immunological response by the host, stimulating mutational escape by the virus [11]. Such an immunological explanation is supported by the observed B factors (Table 1) and Bepipred Scores (Figure 3). The B factor is a crystallographic parameter that represents the thermal imprint and the flexibility of an amino acid component of a protein. The greater the value of B, the greater is the thermal imprint and the flexibility of that amino acid. It has recently been shown that B factor values for epitopic amino acid residues are less than the corresponding values for non-epitopic residues [12]. The B factor value obtained for position 83 within the A82 RBD helix was significantly less than the corresponding amino acid B factor value for position 83 within the V82 RBD helix (Table 1). This result is consistent with the greater observed A82 Bepipred Scores in the helical and perihelical RBD regions (Figure 3). It should be noted that the B factor is not used in the computation of the Bepipred Score. Therefore, the B factor values in Table 1 and the Bepipred Scores are both consistent with a greater antigenicity of the A82 RBD helix compared to the antigenicity of the V82 RBD helix. These results suggest that the numerically greater V82 subset sequence count can be an example of immunological escape [11], i.e., the V82 RBD Ebola virus sequences have escaped the human hosts’ immune system in the ongoing the 2014-2016 epidemic of EVD.

In which the helical pentapeptides are underlined and the position of maximum H is colored either light blue (V) or red (A). Data are presented that suggest that the A-version of the peptide is more antigenic than the V-version. It proposed that these 5-mer and 31-mer peptides may be useful as components of anti-Ebola vaccines. The safety and efficacy of a vaccine containing both versions of the most variable amino acid position in the peptide should be determined, especially considering the contradictory effects of valine and alanine on helix formation [13].