Copyright: © 2016 Ersoy M, et al. This is an open-access article distributed under the terms of the Creative Commons Attribution License, which permits unrestricted use, distribution, and reproduction in any medium, provided the original author and source are credited.

Zellweger syndrome (ZS) disorders are autosomal recessive peroxisomal biogenesis diseases mainly characterized by neonatal onset severe neurodevelopmental delay, profound hypotonia, craniofacial dysmorphism, hepatic dysfunction, polyneuropathy and loss of hearing and vision. There is a wide genetic heterogeneity that while most ZS disorders are rapidly progressive and incurable, and patients rarely survive through their first birthday, many patients have late-onset and mild ZS phenotypes. Human PEX16 is an integral membrane protein first isolated by Honsho and plays a central role in peroxisomal membrane biogenesis. According to the few existing reports, the severity and the natural course of PEX16-mutated patients are unclear, and therapy has not been discussed. Herein and based on existing research, we report and discuss the case of a young female diagnosed with slowly progressive ZS involving a novel PEX16 mutation.

The peroxisome is a single-membrane-bound organelle containing enzymes that catalyze various metabolic pathways, including the β-oxidation of very long-chain fatty acids (VLCFAs), the synthesis of ether lipids, such as plasmalogens, and bile acid metabolism [1]. Peroxisomes are formed through two distinct pathways: the growth and fission of mature peroxisomes and de-novo synthesis at the endoplasmic reticulum (ER) [2]. Inborn errors of peroxisomes are classified into two broad categories: peroxisome biogenesis disorders (PBDs) and single enzyme deficiencies [3,4].

Traditionally, PBDs include: Zellweger (cerebrohepatorenal) syndrome (ZS), the most severe phenotype; neonatal adrenoleukodystrophy (NALD), the phenotype with intermediate severity; and infantile Refsum disease (IRD), the least severe phenotype. PBDs are caused by mutations of PEX genes involved in the biogenesis and the function of peroxisomes and are characterized by deficiencies of multiple peroxisomal enzymes and, in some cases, by the absence of or the reduction in the number of peroxisomes. Mild-to-severe and early-to-late presentations, due to genetic heterogeneity, are observed in patients with PBDs [5-7]. Human PEX16 is an integral membrane protein believed to function at endoplasmic reticulum and first act upon the peroxisomal membrane assembly. Honsho et al. [9] isolated the human PEX16 cDNA, which encoded a peroxisomal protein containing 336 amino acids. Together, PEX3, PEX16, and PEX19 constitute an important set of peroxins generally referred to as the early peroxins because of their essential roles in the initial steps of peroxisome biogenesis10 (Figure 2). Moreover, PEX16 seems to play a key role as a receptor responsible for the integration of peroxins (PEX3 and PEX19) into the ER. 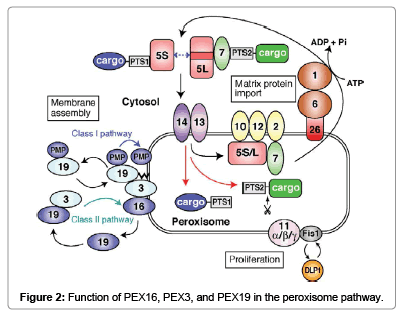 Figure 2: Function of PEX16, PEX3, and PEX19 in the peroxisome pathway.

In an unprecedented case, a patient with a PBD had a homozygous nonsense mutation in the PEX16 gene [9]. The identified cases were published in early reports of PEX16-defective patients with severe clinical presentations [12]. However, recently reported cases showed a nearly identical mild and slowly progressive clinical course [13-15]. Here, we report the clinical presentation, disease course and therapy in a slowly progressive female ZS patient with a novel PEX16 gene mutation.

The patient, a two-year-old Turkish female, presented with mild neuromotor retardation and walking difficulty when admitted to the hospital. She is the first child of consanguineous parents. She was born at term by caesarean section after an uncomplicated pregnancy; birth weight was 3100 g. She showed normal development for the first year of life but then stopped acquiring new skills and lost her ability to walk independently at 24 months due to spasticity and mild ataxia. Except for three-fold elevated transaminase levels, her biochemistry was normal. Lipid levels were at low-normal levels. At follow-up, the transaminases failed to function normally. Speech and other cognitive functions deteriorated slowly over time. At 4 years of age, she developed nystagmus, hyperreflexia, clonus, and extensor plantar responses. At 5 years old, she developed progressive dysarthria with involuntary movements, such as tremors and abnormal head-eye saccades. Excitement or fear amplified these observed clinical presentations. Bilateral symmetric axonal sensorimotor polyneuropathy was determined by electromyography. A brain MRI showed widespread white matter changes on a background pattern of global delay in myelin maturation and cerebral atrophy (Figure 3). Peripheral nerve velocity studies of the lower limbs also suggested demyelination and peripheral and central nervous system involvement. However, metabolic screening studies showed only mild abnormalities, such as mildly increased VLCFAs. PEX genes including PEX16 gene sequence analysis was performed by using the MiSeq next generation sequencing (NGS) platform, an FDA-approved diagnostic system (Illumina, San Diego, CA, USA). We found a novel (c.953-1_974del23ins5) homozygous mutation in the PEX16 gene, which causes a splicing defect. After analyzing this variation with the human splicing finder software, we inferred that it could be responsible for a severe splicing alteration. This defect is an indel mutation, and its effects span the final nucleotide of the intron 10 to the first nucleotides of exon [11]. This gene domain is necessary for interacting with PEX19. The patient received supportive therapy, starting with 30 mg/kg/day docosahexaenoic acid (DHA, 22:6ω3). At the end of 18 months, neuromotor examination and MRI findings remained unchanged, though notably, elevations in VLCFAs remained at low levels. Although further clarification will be required, PEX16 is essentially involved in peroxisome biogenesis [16]. The published cases of PEX16 mutations show different clinical signs with different severities. Ebberink et al. identified 5 different homozygous mutations in the PEX16 gene from 6 patients, including 2 siblings, with a relatively mild form of ZS that were characterized by early-childhood onset of progressive spastic paraparesis and ataxia with progressive leukodystrophy and brain atrophy on brain MRI [12,13].

A floppy female newborn with generalized paucity of limb movements and hyporeflexia was examined by Salpietro et al. [17]. She had liver and cardiac involvement and coarse facial features, including a flattened, wide nasal bridge and a high arched palate. She lacked effective suckling and required a nasogastric feeding tube. Brain MRI at 2 months revealed a generally reduced bulk of white matter and underdevelopment of the inferior cerebellar vermis. She also presented with mitochondrial dysfunction. Plasma VLCFAs levels were elevated, thereby supporting the ZS diagnosis. The infant died at 8 months after progressive deterioration of her cardiac, respiratory and neurological functions.

The 25 patients with cerebellar and/or vermis atrophy in childhood, who were not diagnosable solely by clinical examination, were diagnosed using whole exome sequencing by Ohba et al. [14]. A one-year-old patient had compound heterozygous PEX16 mutations.

Using exome sequencing, Bacino et al. [15] identified an 18-yearold male patient with a progressive neurodegenerative phenotype that had a homozygous PEX16 mutation, suggesting an atypical ZS presentation. This patient’s peroxisomal biochemical abnormalities were subtle, such that plasma VLCFAs initially failed to provide a diagnosis. This case suggests that VLCFA levels could be an insufficient marker for the disease.

To our knowledge, the patient described herein is the first PEX16- mutated ZS case with a novel mutation and an atypical mild slowly progressive phenotype, including solely elevated VLCFAs levels, brain white matter abnormalities and polyneuropathy; thus, these observations support the claim that the identified PEX16 mutations can cause a relatively mild phenotype [16,17].

Furthermore, because of defective myelination (hypodemyelination), which could represent one of the clinical factors responsible for ZS, our patient has been supplemented with DHA. This therapy could prolong patient lifespan and quality of life in these types of mild and slowly progressive ZSs [18]. Although DHA treatment may not halt ZS progression, administering DHA in these slowly progressive ZS patients could prove useful.

According to published research, patients with PEX16 gene mutations do not possess a unique phenotype. Despite the small number of reported cases, the generalized, expected severe clinical course is not a consistent phenotype in PEX16-mutated patients. Current evidence does not support a correlation between genotype and phenotype. However, the mild and slowly progressive types of ZS can be difficult to diagnose with routine analysis, and they may require genetic evaluation. DHA administration for mild phenotypes could be a supportive therapeutic choiceik.