Copyright: © 2016 Liu S, et al. This is an open-access article distributed under the terms of the Creative Commons Attribution License, which permits unrestricted use, distribution, and reproduction in any medium, provided the original author and source are credited.

Hepatitis B virus (HBV) infection is a serious worldwide health problem as drugs (such as lamivudine and adefovir) for treating HBV are still unsatisfactory, due to high recurrence, drug resistance and inevitable side effects. Therefore, there exists a significant medical need to explore novel classes of drugs with different antiviral targets and mechanisms for anti-HBV purposes. Recently, some non-nucleoside HBV inhibitors with specific targets have been obtained from natural sources or prepared by synthesis. These compounds provide useful information for developing novel non-nucleoside compounds as anti-HBV agents.

Hepatitis B virus (HBV) is a severe public health problem in the world, which is caused by hepatitis B virus (HBV) [1,2]. According to the World Health Organization (WHO) reports, more than 400 million people are chronically infected with HBV worldwide and about 1 million people are estimated to die of HBV-infected diseases per year, including cirrhosis, liver failure, and hepatocellular carcinoma [3,4]. Currently available options for the treatment strategies for patients with chronic hepatitis B (CHB) include interferons (interferon-alpha and pegylated interferon) and nucleos(t)ide analogue antiviral agents (lamivudine, entercavir, adefovir dipivoxil, telbivudine and tenofovir) [5]. Interferon alpha, a cytokine, is one of the signaling proteins with the underlying mechanism of immunomodulation. Nucleos(t)ide analogs are polymerase inhibitors that target DNA elongation by inhibiting the reverse transcription of HBV [6]. However, these anti-HBV drugs are still unsatisfactory, due to their limitations. For example, interferonalpha has limited efficacy and high incidence of adverse reactions. The nucleoside analogues are efficient, but long-term use of these agents may result in drug resistance and recurrence in a significant number of patients and the HBV genome can’t be eradicated [7,8]. In the last decade, the therapeutic use of the anti-HBV agents such as interferonalpha and nucleos(t)ide analogs have developed and made great progress. For example, HBV may be eradicated. However, the purpose, including clearance of HBV DNA and seroconversion of hepatitis B surface antigen (HBsAg) to anti-HBs, still remain impossible at present. Therefore, there exists a significant unmet medical need to explore novel classes of drugs with different antiviral targets and mechanisms for anti-HBV purposes. Many classes of non-nucleoside compounds by isolation or synthesis have been showing promising activity against HBV. But little is referred to the mechanisms. Therefore, this review will focus on the novel targets and the progress of related small molecule of non-nucleoside HBV inhibitors under development and evaluation.

HBV contains a 3.2 kb partially double-stranded DNA genome with four open reading frames (ORFs) encoding four viral proteins including core protein (Cp), surface protein (S), polymerase (P), and X protein (X) [9]. Core protein mainly constitutes the nucleocapsid which harbors the viral DNA and polymerase [10]. It was reported that dominant negative core protein mutants, which could not support pregenomic RNA packaging and genome maturation, could effectively inhibit replication of HBV [11]. The envelopment of virus particles was interrelated to the interactions between HBV surface proteins and core proteins, and blocking these interactions may serve as a novel anti-HBV strategy [12,13]. Two promising anti-HBV drug candidates KKJ00626 and KSG00011 (Figure 1), were found to inhibit the production of HBV particles in Huh-7 cells transfected with HBV DNA by blocking the interactions between HBV surface proteins and core proteins [14]. 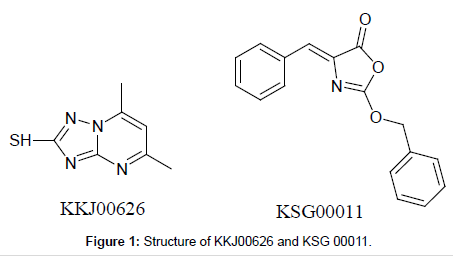 Lignan helioxanthin and helioxanthin analogs (Figure 2) were reported to possess potential anti-HBV activity with a unique anti- HBV mechanism [15,16]. It was found to inhibit the gene expression and HBV DNA replication in wild-type and lamivudine-resistant mutants. The luciferase reporter assay results showed that HE-145 inhibited selectively core promoter (CP) and surface antigen promoter II (SPII), but had no effect on X gene promoter (Xp) and surface antigen promoter I (SPI). Besides, their anti-HBV efficiencies in vivo warranted further investigation. The lignans niranthin and nirtetralin B (Figure 3) from Phyllanthus niruri L. were reported to possess obvious anti-hepatitis B virus activity both in vitro and vivo [17,18]. The treatment of HBV-transfected HepG2.2.15 cells with niranthin or nirtetralin B exhibited a dose-dependent inhibitory effect not only on the secretion of HBsAg and HBeAg antigens but also on the replication of HBV DNA. Niranthin and nirtetralin B were found to show anti- HBV activity and hepatoprotective effect in HBV infected ducks. For further study, a series of analogues were synthesized based on these two ligands and their potential anti-HBV activity was evaluated [19-21]. Their potential anti-HBV activity was evaluated. The results showed that some of the analogues displayed inhibiting not only HBsAg and HBeAg secretion but also HBV DNA replication, compared with 3TC which showed significantly activity against HBV DNA replication while showing little inhibitory effect on HBsAg and HBeAg secretion. In addition, the docking results and measurement of the interaction indicatied that the anti-HBV effect of these analogues may exert its anti-HBV activity by inhibiting HBcAg. 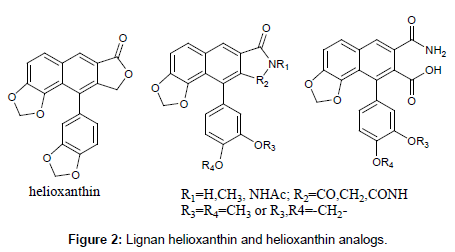 3,4-O-dicaffeoylquinic acid and 3,5-O-dicaffeoylquinic acid (Figure 4) could markedly decrease the HBV cccDNA content in HepG2.2.15 cells and HBV transgenic mice. HO-1 was found to destabilize the HBV core protein, suggesting that overexpressionof HO-1 may contribute to the antiviral activity by decreasing the stability of the HBV core protein, which blocks the refill of nuclear HBV cccDNA [22,23].

HBsAg acts as an anti-HBV target based on the HBV-specific immune response. Obviously, HBsAg could elicit production of neutralizing antibodies. However, HBsAg is overwhelmingly produced and stably maintained in chronically HBV-infected patients, leading to the suppression of an HBV-specific immune response. Besides, HBsAg is required for assembling of viral particles. Aromatically substituted tetrahydro-tetrazolo-(1,5-a)-pyrimidine (HBF-0259) (Figure 5) was a molecule inhibitor of HBsAg secretion [24]. It’s reported that HBF- 0259 show its anti-HBV activity by inhibiting the secretion of HBsAgbearing subviral particles and DNA-containing viral particles, not the HBeAg secretion and HBV replication in HepG2.2.15 cells. 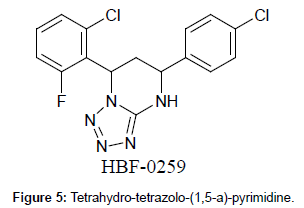 Oxymatrine (Figure 6), an alkaloid from the herb Sophora alopecuraides L., was reported to exhibit anti-HBV effect in HBV transgenic mice [25,26] and patients with chronic HBV infection [27]. The antiviral mechanisms may be interfering with the reverse transcription process from pgRNA to DNA by destabilizing Hsc70 mRNA, and then inhibiting the replication of HBV [28]. Cepharanthine hydrochloride (CH) (Figure 7), a natural alkaloid, was reported to suppress HBeAg production and HBV DNA replication by downregulatng significantly the Hsc70 mRNA levels, indicating that its activity could be associated with its inhibitory effect on host Hsc70 [29]. 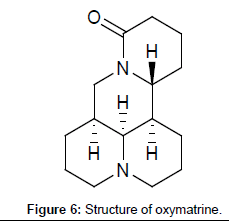 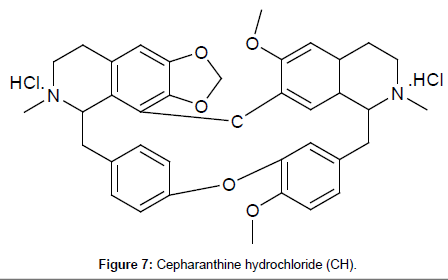 HBV polymerase plays an important role in the viral replication cycle and is a key target of anti-HBV chemotherapy. The DNA polymerase activity needed two essential enzymatic activities, including conversion of pgRNA to the DNA copy and RNase H activity. The TP domain of HBV polymerase was a protein primer to form a stable ribonucleoprotein in the viral RNA packaging, and was reported to plays a critical dual role in the protein-primed initiation of viral reverse transcription and in nucleocapsid assembly. So it could serve as a target for anti-HBV agents. Iron protoporphyrin IX (hemin) and several related porphyrin compounds (Figure 8) were found to block the interaction of polymerase-e by targeting the TP domain of the HBV polymerase, thus blocking the protein-priming reaction and viral reverse transcription [30]. 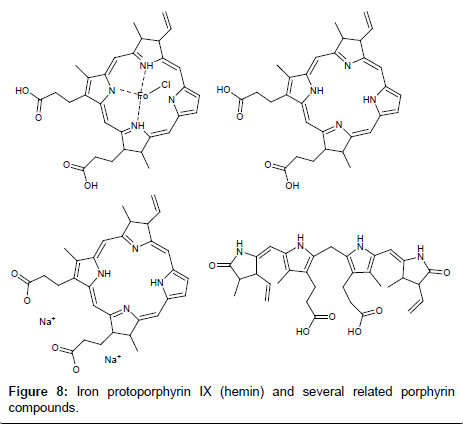 Pregenomic RNA could recognize reverse transcriptase P and trigger the HBV replication. The combination of small molecule and pgRNA would disturb the replication of RNA, resulting in that the virus cannot assemble and replicate according to the original way. Thus, pgRNA could be served as a novel target [31,32].

1-Deoxynojirimycin (DNJ) and its derivatives possessed anti-HBV activity by a mechanism of preventing the proper encapsidation of the HBV pgRNA [33-36]. Phenylpropenamides, such as AT-61 and AT- 130 (Figure 9), were shown to inhibit HBV replication by interfering with viral pgRNA encapsidation and packaging [37,38]. 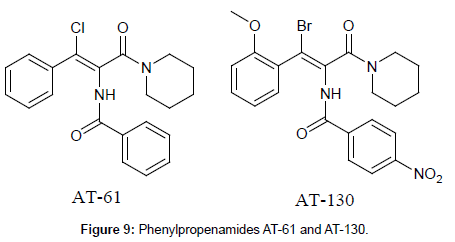 Lutein (Figure 10), a major dietary carotenoid, was found to show anti-HBV activity by reducing both HBsAg and HBeAg secretion and extracellular HBV DNA levels in HepG2.2.15 cells. The activity involved the inhibition of the HBV full-length promoter [39]. 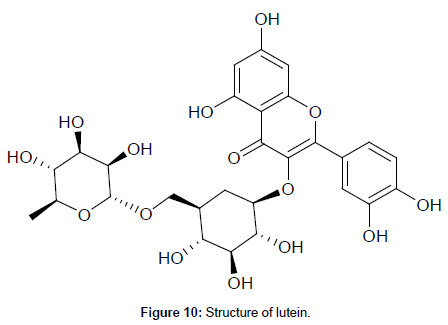 Currently, due to drug resistance, lower response rate, and adverse side-effects of current anti-HBV drugs, novel and effective anti-HBV agents with different antiviral targets and mechanisms are needed to be explored. Many non-nucleoside HBV inhibitors have been found for their promising and potent inhibitory effects against HBV, but most studies have focused primarily on evaluating their anti-HBV activities, with little attention applied to their respective targets and mechanisms of action. Therefore, they should be included in further experimental and clinical investigations in order to promote the new anti-HBV drug discovery and development for the hepatitis B infection treatment.