A Short Review on Chitosan Membrane for Biomolecules Immobilization

Copyright: © 2015 Thirumavalavan M, et al. This is an open-access article distributed under the terms of the Creative Commons Attribution License, which permits unrestricted use, distribution, and reproduction in any medium, provided the original author and source are credited.

Chitosan is an important natural polymer that occurs in the world. Chitosan is soluble in acidic aqueous media and it can be obtained in various forms. It is widely used for many applications. Hence, we briefly describe the role of chitosan in membrane form, an important area of research in which a variety of synthetic methods has been proposed and their significance is explained. Thus, this review emphasizes the papers on the high value-added applications of these chitosan membranes in diverse fields such as medicine, biological, cosmetics and nanotechnology.

The emerging field of biotechnology for the isolation or purification of biologically active molecules such as proteins, enzymes, peptides and nucleic acids requires a rapid development that emerges new technologies [1]. Such isolation or purification of biomolecules involves either adsorption or immobilization of biomolecules onto matrices that bearing functional groups [2]. Among these, the adsorption methods are considered to be ineffective due to weak bonding and low degree of stabilization [3]. So, the immobilization technique has received considerable attention as it provides several advantages including reuse, ease in separation, and improvement in stability. Such immobilization fixes the biomolecules onto solid inert support either by chemical adsorption (covalent bonding), van der waals force (physical adsorption) or encapsulation [3]. The selective and specific binding is based on affinity interaction between the support surface and biomolecules [4]. One of the most important aims of biotechnology is to enhance the conformational stability of the biomolecules and such stabilization is significantly controlled by the structure of biomolecules, the immobilization methods and the type of support. So, preparation of a suitable candidate for biomolecules immobilization has become thrust area of recent research. In general, the affinity column chromatography has been used for separation of biomolecules, but with limitations [1,5,6]. Recently, the affinity membrane has emerged as an alternative to column chromatography overcoming all the above said limitations [1,5,6]. The affinity membrane has provided some advantages over column chromatography such as higher flow rates, lower pressure drops, rapid binding and higher efficiency [7,8]. Actually, two approaches have been employed to prepare such affinity membranes. The most common method starts from commercially available microporous membranes such as polyethylene, polypropylene, nylon, poly(vinylidene difluoride), polysulfone or glass membranes. However, these membranes are usually hydrophobic and relatively inert. Thus, in order to overcome these drawbacks, a second approach was employed, in which membranes that contain functional groups such as cellulose membranes that contain CH2OH and acetate functional groups were directly prepared. However, the cellulose membranes are also relatively hydrophobic, brittle, soluble in acids, and cannot easily acquire a macroporous structure. Hence they required some chemical modifications before they can be used. Later, the affinity membranes were either operated as macroporous membranes or fiber membranes [9,10]. In recent times, macroporous chitosan membranes with controlled pore size, good mechanical strength, chemical stability as well as biocompatibility have been developed [1,5,6]. Chitin and chitosan are natural polymers of remarkable availability and chitosan is a poly(2-amine-2-deoxy-D-glucose) which is obtained through poly(N-acetyl-D-glucosamine) deacetylation of chitin in alkaline medium. Chitosan is an excellent material to produce membranes because of its hydrophilicity, reactivity, moldability, mechanical properties and biocompatibility. Hence chitosan membranes can be used in many areas such as food science, biochemistry, pharmaceuticals, medicine, agriculture and others [11]. Chitosan contains a large number of reactive hydroxyl (OH) and amine (NH2) groups and consequently, it is no longer necessary to increase the number of these groups of the chitosan and these reactive groups can be readily modified using different ligands and also easily be coupled with biomolecules. Thus, chitosan can be an outstanding candidate for obtaining affinity membranes. Because of the presence of numerous amine groups in the chitosan molecules, the chitosan molecules can be cross-linked and the cross-linked chitosan membranes could also be employed for immobilization of biomolecules [1]. On the other hand, the choice of potential application of affinity membranes in the field of biotechnology is broad and thus there is a continuous quest for membrane materials which either possess some specific properties or have wide applicability which can easily be tailored for preferred properties.

Characteristics and Significance of Chitosan

Chitosan is actually obtained from chitin and when the degree of deacetylation of chitin reaches about 50% (depending on the origin of the polymer), it becomes soluble in aqueous acidic media and it is called as chitosan. Chitosan is a natural biodegradable polymeric material which is having good physical and biological properties. Chitosan is the only pseudonatural cationic polymer and thus, it finds many applications due to its unique characteristics. In the solid state, chitosan is actually a semicrystalline polymer. Its morphology has been investigated and many polymorphs are reported for chitosan in the literature [12].

The main exploration of chitosan concerns its preparation with varied molecular weights and deacetylation from chitin, the dependence of its solution properties, the preparation of its derivatives and its applications [12]. Chitosan can be obtained in various forms such as sponges, powders, membranes, beads and fibers [13]. The NH2 groups of the chitosan are involved in specific interactions with metals and thus chitosan is also known to have good complexing ability [12]. It is known that chitosan could enhance coagulation, suppress fibroblast growth and improve interstitial cell growth. It could also be used to prepare controlled-release medicine membranes, artificial skin and anti-adhesion membranes for post-operative applications [14]. Thus, chitosan meets several requirements in the biological, biotechnology or biomedical fields. The schematic representation of role and characteristics of chitosan membrane for immobilization is given in Figure 1. 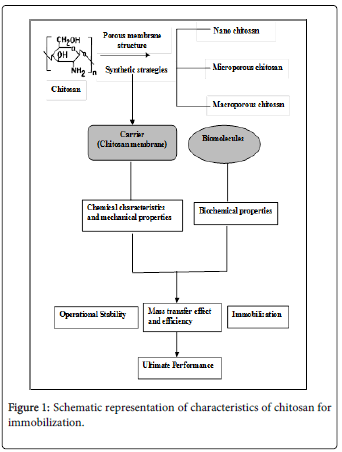 Figure 1: Schematic representation of characteristics of chitosan for immobilization.

The method of immobilization onto chitosan membrane can be divided into three main categories as follows;

2. Chemical adsorption of biomolecules onto chitosan membrane either directly or through a polymer or metal bridge.

3. Covalent, site-directed attachment of biomolecules directly to the chitosan membrane. 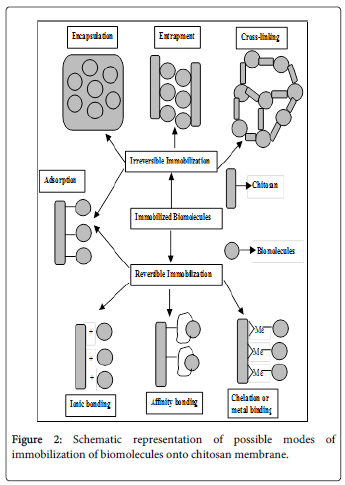 Figure 2: Schematic representation of possible modes of immobilization of biomolecules onto chitosan membrane. 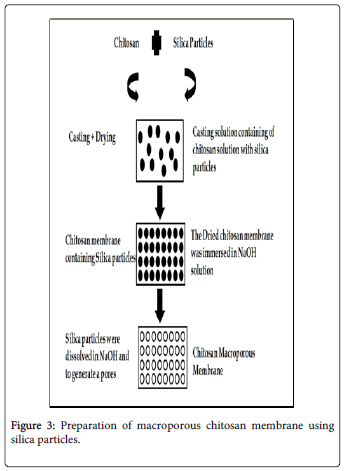 In 2001, Ruckenstein and Guo [16] prepared mercerized macroporous cellulose membranes with large pore sizes and high porosity from filter paper by mercerization (caustic treatment) followed by cross-linking. These membranes were used for trypsin immobilization. The activities and stabilities of the immobilized trypsin membranes were investigated and compared [16]. Thus, it is very clear that macroporous chitosan membranes enhanced application of chitosan for both adsorption and immobilization phenomena.

Hu et al., in 2001 [14] have reported the preparation of chitosan membranes using fixation agents composed of alcohol, glycerol and potassium hydroxide and this sol-gel method significantly shortened the preparation time. The physical and biological properties were also studied. The results of this study clearly indicated that the addition of fixation agents could not only improve the flexibility of membranes but also improved the ability of wet keeping. This study revealed the effect of fixation agents on chitosan membrance characteristics during the process.

In 2004, Beppu et al., [17] have reported the preparation of histidine functionalized chitosan membrane for the removal of Cu2+ from aqueous solution. The results observed in this study indicated that the immobilization of histidine on porous chitosan membranes presented synergy with porosity and this synergy may be negative or positive, depending on the initial membrane porosity. Rashidova et al., in 2004 [18] have prepared hybrid nanocompositional chitosan/silica by sol-gel process through the interaction of organic polymers with tetraethoxysilane (TEOS). It was shown that the process consisted of two steps and properties of nanocomposite were mainly dependent on structure of the material.

In 2005, the adsorption of catalase was studied by Shentu et al., [2] using Cibacron Blue F3GA-attached chitosan microspheres (CB-CS). Significant amount of the adsorbed CAT (up to 90.6%) was eluted in the elution medium and it revealed that CB-CS could be applied for adsorption of CAT without causing any denaturation.

In 2007, Beppu et al., [19] have studied the effect of cross-linked chitosan membrane on ion permeability and water adsorption and obtained the result that chemical modification with glutaraldehyde made chitosan more hydrophobic. The improvement in the properties of chitosan membranes was reported by Chen et al., in 2007 [20]. Chitosan based biomaterials were prepared using several organic acid solutions and the effect of these acids on dissolution of chitosan was also discussed by them. In their study, they concluded that the use of these organic acid solutions produced chitosan membranes with enhanced mechanical properties and hydrophlilicity for various biomedical applications.

A novel L-lysine modified semi-crosslinked chitosan was synthesized by Dong et al., in 2011 [23] and it was demonstrated to be a promising enzyme support for the immobilization of glucose oxidases (GODs). Reports of this study indicated that the GODs immobilized chitosan membrane showed excellent operational stability and reusability. Also, the enzyme activity studied at a range of varied temperatures and pH indicated that the GODs immobilized onto chitosan had good thermal and pH stability.

Chitosan membranes were used for in vitro evaluation of bioactivity by Lieder et al., in 2013 [24]. They have recently developed a standardized and easily applied protocol for the solution casting of chitosan membranes displaying favorable bioactivity by sustaining cell attachment and proliferation for extended culture time. This protocol is appropriate for the use of chitosan materials and the investigation of chitosan derivatives with modified properties. Susanto et al. in 2013 [25] obtained chitosan based porous composite membrane with carbon nanotubes (CNTs) for immobilization of glucose oxidase and studied their potential use in biosensors. The results showed that enzyme immobilization capacity was greater for composite membranes and these membranes increased the stability of the enzyme immobilization. The immobilization of enzyme was influenced by both pH and the concentration of the enzyme solution. The presence of CNTs significantly enhanced the electrical conductivity of the chitosan membranes.