Copyright: © 2016 Mori K, et al. This is an open-access article distributed under the terms of the Creative Commons Attribution License, which permits unrestricted use, distribution, and reproduction in any medium, provided the original author and source are credited.

This study is concerned with horizontally mixed structure system that an existing old R/C structure is seismically retrofitted by addition of exterior steel frame. This system is suggested as seismic retrofitting method in Japan. And some previous studies related to its seismic response mitigation effects were conducted analytically. This study focuses on ultimate seismic state on its multi-degree of freedom system, and the feasibility study of connection joint between exterior steel frame and existing R/C building is investigated. To determine the design point which estimates the ultimate seismic performance, monolithic load patterns considering seismic load effect are adopted on pushover analysis under structural design procedure. Herein, this composite system consists of two various structural systems, and it is assumed that the complicated elasto-plasticity behaviors are presented during inelastic response. So this study suggests the envelope curve model which approximates the inelastic seismic response domain, and the load pattern is obtained by reference of this model. From comparison of proposed model and seismic response analysis, the predicted design points are corresponded each other. And also, it is observed that the predominant failure mode is changed on original and retrofitted state. So this paper suggests the retrofitting strategy which overall failure mode formation is guaranteed. Moreover, the actual connection method between steel frame and R/C building has been suggested. Herein, the required strength is calculated by reference of design points, and ultimate strength of this proposed connection compares with the requirement. From comparisons, it is confirmed that this joint shows sufficient strength.

It has been discussed that old R/C institutional buildings, such as government offices or school buildings, have poor seismic resistant performance. In Japan, “An Act on Promotion of Seismic Retrofitting of Buildings” was enacted in 1995.

In these trends, “the horizontally mixed structural system” that an existing old R/C structure is strengthen by new steel frames attached is suggested as one of the seismic rehabilitation methods by The Japan Iron and Steel Federation (Figure 1). It aims that the retrofitted composite structure can expand its floor space and acquires architectural changeability and flexibility (Figure 2). So in terms of the addition of flexibility and conversion for existing buildings, the concern over the horizontally mixed structural system has risen increasingly in future. Iwabuchi and Ito et al. and Chiyo and Fujii et al. [1] conducted analytical researches on the response mitigation effect of this system. These researches showed that the connection joint between the existing old R/C structure and the steel frames needs to possess sufficient rigidity and strength under an earthquake motion (Figure 3). However, it has not investigated the ultimate seismic states and the retrofitting effect of this system in elasto-plasticity behaviors. Then this paper investigates ultimate seismic states of the multi-story horizontally mixed structural system and suggests the load pattern adopted in pushover analysis. Moreover, this paper investigates whether the connection joint is effective in the ultimate seismic state [2]. 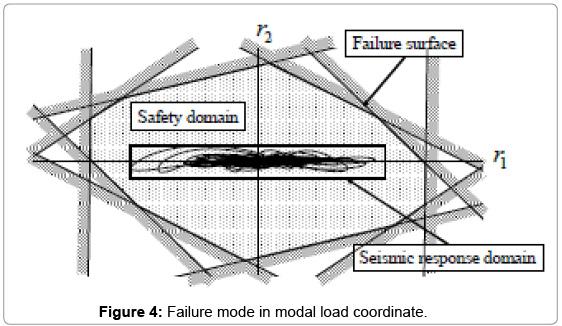 In normal structural seismic design, the pushover analysis is often performed, and a monolithic load pattern such as Ai distribution is adopted. However, in the horizontally mixed structural system, it is assumed that the complicated inelastic behavior is presented because both the hysteresis characteristics of R/C and steel structure exist simultaneously. So it is likely that this effect is considered on load pattern adopted on limit state analysis during limit state design procedure (Figure 5) [3]. 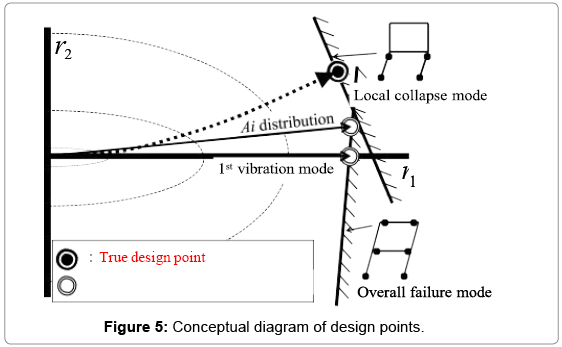 This study suggests the envelope curve model which approximates the inelastic seismic response domain. This model is described by Equation 2.

The input level of seismic waves is assumed gradually from a range of elastic to a range of forming failure mechanisms. The values of α and β are determined so that the envelope curve model for each seismic wave can describe (Figure 6). 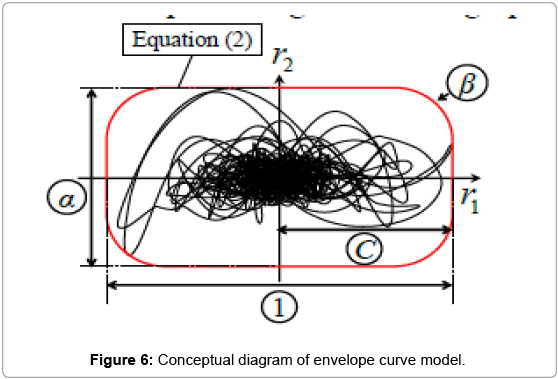 The analytical model is the 3-story horizontally mixed structural system composed of the R/C structure and exterior steel frame, assuming 3-degree of freedom system (Figure 7). Here, the connection joint possesses sufficient rigidity and strength, and R/C structure and connection frame behave in a unified fashion. And it is assumed that the mass of each floor is sum of R/C structure and steel frame. The restoring force characteristics of R/C structure and steel structure are Takeda model and perfect elasto-plasticity model respectively (Figure 8). Considering aging deterioration, this study regards concrete strength as small value: Fc = 18 N/mm2. The weight and vibration characteristics of this model building and the seismic waves adopted in this analysis are summarized in Table 1. The sum of 1st mode effective mass and 2nd mode effective mass in the analytical model is more than 90% of the total, so this study excludes 3rd mode component from consideration [4-6]. 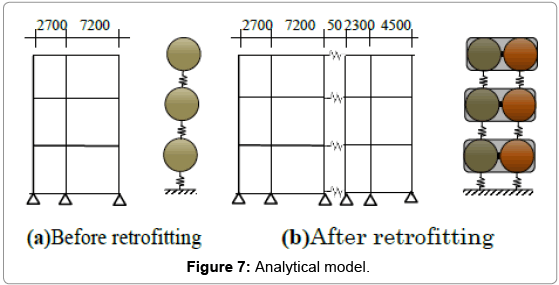 The six failure modes are expected in the analytical model frame as shown in Figure 9. The transitions of the value of α and β in each input wave level are shown in Figures 10 and 11. 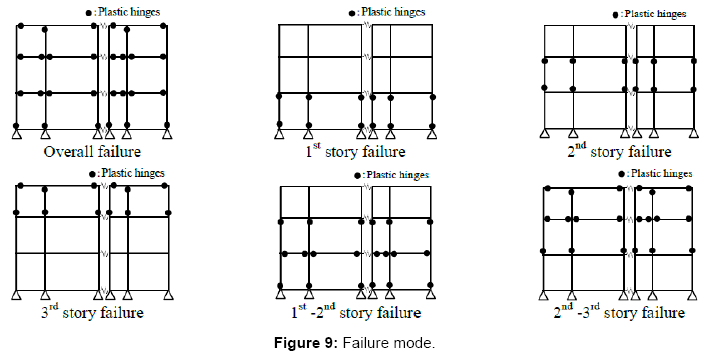 Figure 10: Transition of constants before retrofitting.

Figure 11: Transition of constants after retrofitting. 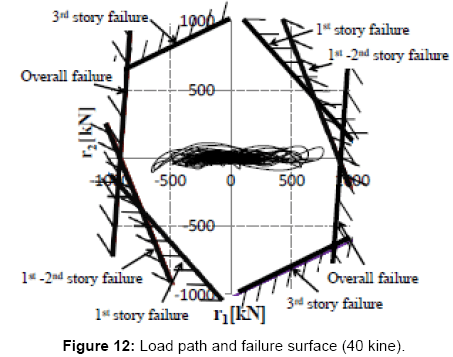 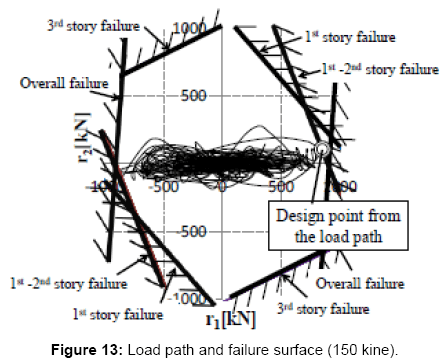 This study adopts large input level (120 kine) that was observed at The South Hyogo Prefecture Earthquake in 1995. From the results of Figures 10a and 11a, α tends to rise as input level becomes large and converge at about 0.25 in all kinds of seismic waves. Comparing the result of the R/C structure before retrofitting and the horizontally mixed structural system under same input level, there is little difference between two values of α. Therefore, it is confirmed that there is little effect of higher vibration mode on retrofitting state. From the results of Figures 10b and 11b, the relation β under the elastic response is not confirmed; however, β under the elasto-plasticity response takes averagely about 3.0. From the above, the seismic response domain of the horizontally mixed structural system in the ultimate seismic state can be described by the envelope curve model using α=0.25, β=3.0, and the design point is identified by determination of value of C.

From the above, it can be said that adjusting the column-to-beam strength ratios of steel structure can control the failure mechanism of the horizontally mixed structural system in the ultimate seismic state.

Outline of investigation of connection joint

Mitomi et al. suggested the concrete connection joint techniques, and the effectiveness of this method is shown experimentally. However, it is likely that the stress on the connection in the ultimate seismic state is very complicated. Therefore, pushover analysis is performed for investigating whether the connection joint is effective in the ultimate seismic state. Herein, the load distribution is calculated from the design point by the envelope curve model.

Outline of the connection joint 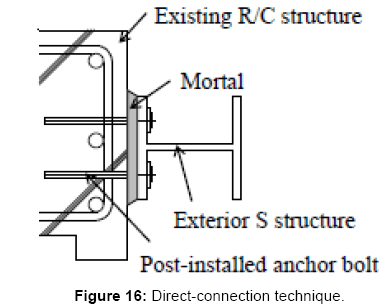 The seismic response analysis is performed for this analytical model, and the collapse load and the load distribution is gained as shown in Figure 17. The pushover analysis for the investigation of the connection joint is adopted in these conditions of the ratios and design points. 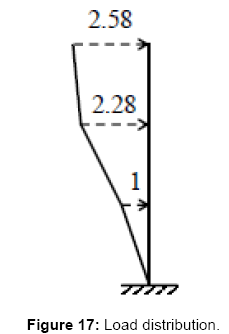 Result of the pushover analysis

From the results of the pushover analysis, the maximum tensile force at the each bridge beam (Figure 2) is calculated as shown Table 2, following the evaluation method suggested by Mitomi et al. The tensile strength of the three collapse mode with post-installed anchor bolts is also shown in Table 2. It is confirmed that the joint coefficient αc is more than 1.5 in each joint. Therefore, the connection joint has sufficient strength.

This study investigates the design point and the load distribution of the multi-story horizontally mixed structural system, and the feasibility of the connection joint in the ultimate seismic state. The main conclusions are shown below:

1. The envelope curve model that approximates the inelastic seismic response domain in the horizontally mixed structural system is suggested. Moreover, by identifying the design in the ultimate seismic state from this model, the failure mechanism and the load distribution are investigated.

2. It is shown that the failure in the ultimate seismic state mode can move after retrofitting. Adopting the relevant column-to-beam strength ratios of the steel structure, the failure mechanism can be controlled.