Copyright: © 2014 Singh A, et al. This is an open-access article distributed under the terms of the Creative Commons Attribution License, which permits unrestricted use, distribution, and reproduction in any medium, provided the original author and source are credited.

A simple, accurate, and reliable high-performance liquid chromatography (HPLC) method was developed for determination, separation and estimation of clopyralid active ingredient in its formulation. The active ingredient in formulation was estimated by two methods and cleanup was performed using C18 SPE. Estimation was done by HPLC using 5 μm, C18 column, and mobile phase 0.02 % acetic acid in methanol: acetonitrile (90:10 v/v) and detection at 229 nm. The efficiency of clean up for standard clopyralid was found to be 98.02-98.66% at different concentrations. Overall recoveries for different methods ranged from 98.3-100.1 %. The LOD and LOQ were 0.1 and 0.3 ng respectively. The detector response was linear within concentrations range 0.25-10.0 ng at RSD 1.87%.

Pesticides are indispensable for sustained agricultural production. The successful employment of any pesticide depends upon stabilities of its formulation. Every formulation contains a toxicants mixed with an inert diluents or carrier. The active ingredient in a formulation sometime does not contain the reported concentration for various reasons. Indian farmers spend about US $2.6 billion on unregistered or counterfeit chemicals. The untested and unregulated products in turn cause about $1.3 billion in crop damage, according to a new report by the Agrochemicals Policy Group (APG) [1]. In order to check passage of spurious/sub-standard formulation to the consumer to save him from avoidable losses from pests, it is necessary to develop a convenient and reliable method of estimation of active ingredient in a formulation.

Persistence/dissipation studies of clopyralid in soil/water/crops has been reported by various workers [4-9]. As per our literature search, no method has been reported for the estimation of clopyralid in its formulation using SPE method and determination by RP-HPLC. The registration of clopyralid is proposed for use is under consideration by Central Insecticide Board, India. Thus, the present investigation was undertaken to optimized method that would be rapid, efficient, precise, accurate, specific, economic and green method for estimation of active ingredient (a.i.) in formulation (10 SL) by reversed phase HPLC.

The formulation clopyralid, 10 SL and technical (95% pure) were obtained from M/S Willowood Ltd, Hong Kong. The technical sample was recrystallized prior to use. All the glasswares used were of Corning or Borosil make. All the solvents used were of analytical (AR) or HPLC grade. Triple distilled water was prepared in the laboratory by double distillation of single metal distilled water in all quartz double distillation assembly.

The Beckman Gradient HPLC system was used for estimation. The operating parameters were Discovery C-18, 5 μm, (150 × 4.6 mm) column, mobile phase 0.02 % acetic acid in 9:1 v/v methanol:acetonitrile with isocratic mode at a flow rate of 1 mL/min and UV detection at 229 nm, aufs 0.02. Five microliter volume of sample was injected each time in HPLC by full loop injection method and chromatograms were recorded by HP (model 3395) integrator.

Liquid-liquid extraction (Indirect method): Formulation of clopyralid (0.1 mL) was mixed with water (50 mL) and liquid-liquid extraction was repeated three times with ethyl acetate (30 + 20 + 10 mL). Organic layer was collected, dried and dissolved in 2 mL mobile phase and one part was used for analysis by HPLC while other was subjected to cleanup.

Clean-up of sample was done using SPE C-18 cartridge. The SPE C-18 cartridge was prewashed and conditioned with 3 mL each of acetonitrile and methanol. One mL of sample was loaded on cartridge and washed with 2 mL water followed by 1 mL methanol and washings was discarded then finally eluted with 2 mL methanol. Eluent was collected, dried under the stream of nitrogen and re-dissolved in 2 mL mobile phase and used for HPLC analysis. The samples were filtered through 0.22 μm PTFE disc filter prior to HPLC.

Solid phase extraction (Direct methods): For formulation analysis two methods were used. First method involved preparation of 100 ppm stock solution by dissolving 0.1 mL of formulation (clopyralid 10% SL) in 100 mL of distilled water. From this solution serial dilution of 10, 5, 2, 1, and 0.5 ppm were made. In another method methanol was used instead of water. Lower concentrations (2, 1 and 0.5 ppm) were taken for cleanup and analysis. The concentration of formulation reported by the company i.e. 10% was assumed to be correct. The percent a.i. obtained from formulation was compared with pure standard compound of clopyralid and percentage of a.i. in formulation was calculated. All the experiment was done in triplicate. Since pure formulation contains lot of impurities which may cause damage to the column hence, diluted formulation was not injected and cleanup was done prior to analysis.

Cleanup: Clean-up of formulation is necessary before analysis as it may have non-polar impurities which may interfere with the object peak of interest. Clean-up of formulation of both methods were done using SPE C-18 cartridges. The SPE C-18 cartridge was prewashed and conditioned with 3 mL each of acetonitrile and methanol. Diluted solution (2, 1 and 0.5 ppm) of formulation was loaded (0.5 mL) on cartridge and washed with 2 mL water followed by 1 mL methanol and washings was discarded then finally eluted with 2 mL methanol. Eluent was collected, dried under the stream of nitrogen and re-dissolved in 2 mL mobile phase and used for HPLC analysis. The samples were filtered through 0.22 μm PTFE disc filter prior to HPLC.

Recovery: For recovery of clopyralid from its formulation between two batches of 1ml each were taken in graduated stopper test tubes. In one batch 1 ml of 1 ppm standard solution in methanol was added while in other only methanol was added which was treated as control. Extraction and cleanup procedure were followed as described above. Difference between peak areas of both batches was taken for recovery calculation. All samples were taken in triplicate.

Validation: The method was validated by evaluating it in terms of specificity, linearity, precision, accuracy, Limit of Detection (LOD) and Limit of Quantification (LOQ).

The chromatograms obtained using mobile phase, 0.02 % acetic acid in methanol: acetonitrile (90:10 v/v) at a flow rate of 1.0 mL min-1, showed retention time 9.8 minute for clopyralid. The Indirect method of formulation analysis which was without cleanup showed many interfering peaks at retention time of clopyralid which were removed after cleanup but overall recovery was poor (around 80%) (Figure 1). The efficiency (recovery) of cleanup by SPE for standard clopyralid was 98.02-98.66% at different concentrations Table 1. Hence direct method was adapted using methanol and water as diluting solvent. The recoveries using water and methanol as diluents were almost same and ranged from 98.3-100.1%. The chromatogram revealed that there was no interference or co elution of any peak at the time of clopyralid elution peak. Among all methods for the analysis of active ingredient in formulation the method using water seems best in terms of recovery and cost effectiveness. The average active ingredient in the formulation using methnol/water as diluting agent (direct method) was found to be about 9.91%. 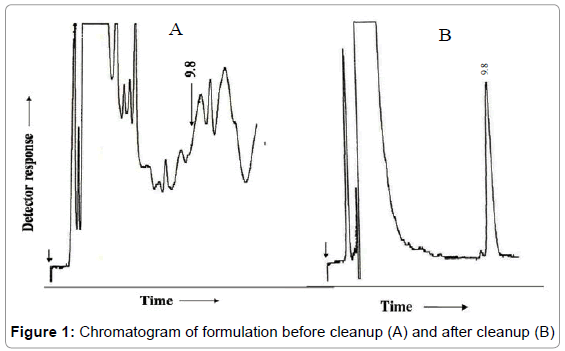 Figure 1: Chromatogram of formulation before cleanup (A) and after cleanup (B)

Table 1: Recovery of clopyralid from standard and different methods

Linearity: Linearity of the HPLC assay was evaluated in triplicate at five concentration levels consisting of 0.05, 0.1, 0.2, 0.5 and 1.0 μg mL-1 clopyralid. Average detector response in terms of integrator counts was used for preparation of calibration curve. Detector response was linear to the concentration as the value of coefficient of determination (R2) 0.9995.

Precision and accuracy: The intra-day and inter-day precision of the HPLC analytical method were evaluated at different concentration and estimated variation was between 4 percent. The accuracy of an analytical method is defined as the closeness of measured values to their known nominal values. Accuracy of the method was deemed acceptable if the value of percent RSD value is lower than 2. In our study the value percent RSD was 1.87 which is acceptable.

LOD and LOQ: LOD and LOQ were the concentrations of a compound at which its signal-to-noise ratios (S/N) were detected as 3:1 and 10:1 respectively. They were obtained by diluting the reference standard in a stepwise manner using the established LC conditions. The LOD and LOQ of clopyralid were 0.1 and 0.3 ng respectively.

The proposed method was developed and validated and shows method is simple, rapid, accurate, precise, sensitive, and eco-friendly. The detection of clopyralid by the HPLC method can be performed rapidly as there is noteworthy less retention time with less or no interference of matrix. Therefore, the method would be useful for both qualitative and quantitative analysis of clopyralid

Application of the proposed method

Green, rapid and sensitive method developed may be used for determination of active ingredient in the formulation of clopyralid for the purpose of quality control of the commercial product and routine analysis by Agrochemical and research laboratories.

The authors are thankful to M/s Willowood Ltd., Honk Kong for providing the technical material of clopyralid and its formulation 10 SL for the research purpose.