Copyright: © 2016 Joshi M, et al. This is an open-access article distributed under the terms of the Creative Commons Attribution License, which permits unrestricted use, distribution, and reproduction in any medium, provided the original author and source are credited.

Sodium polystyrene sulfonate (SPS, Kayexalate), has been used in management of hyperkalemia since 1957 when it was first discovered. Kayexalate is a cation resin used either as oral or as an enema form in the management of hyperkalemia. Originally sorbitol was mixed with sodium polystyrene sulfonate as a cathartic to avoid constipation. Even though kayexalate is used often to treat hyperkalemia, its side effect of colonic necrosis is a rare complication that was first discussed in 1987, in a series featuring five uremic patients. The study led to the FDA advisory to discontinue the addition of sorbitol due to this associated risk of colonic necrosis [1].

Our case study describes a 43-year-old Female with past medical history of end stage renal disease on hemodialysis, diabetes, hypertension, seizure disorder, and endocarditis who presented with Altered Mental Status and weakness. The patient was admitted with diabetic ketoacidosis with noted hyperkalemia of 6.6 mEq/l, and an anion gap of 30 mEq/L. The patient was given a stat dose of Kayexalate in the ED and was transferred to ICU on an insulin drip (Figure 1). In the ICU the patient was given another dose of Kayexalate and was dialyzed in the unit. Once she was stabilized she was downgraded to regular ward a few days later. On the ward, she was found to have multiple episodes of bloody diarrhea, with nausea, vomiting and acute abdominal pain. Her hemoglobin dropped dramatically from 8.3 g/dl to 4.5 g/dl, so she was taken for emergent bleeding scan which showed active bleed in Sigmoid colon. The patient became hemodynamically unstable requiring intubation, and aggressive resuscitative measures, notably activation of the massive blood transfusion protocol. Patient was taken for emergent exploratory laparotomy with sigmoid resection and colostomy formation. Intraoperatively, inspection of the sigmoid demonstrated intermittently thickened, necrotic wall and the lumen was coated in clots. The patient remained in critical condition status post surgery. Over the course of her admission, the patient received 7 units of packed cells, 2 units of fresh frozen plasma, one single donor platelets, and 5 units of cryoprecipitate. The patient ultimately did well, and was able to be discharged to acute rehab. 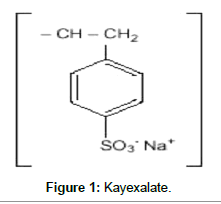 Kayexalate is a finely ground light brown powder, a cation exchange resin prepared in sodium phase with an in vitro exchange capacity of approximately 3.1 mEq of potassium per gram. It is an insoluble polymer with a molecular structure resembling a crystal lattice to which a reactive carbonic or sulfonic groups are attached. In the gastrointestinal tract, the resin either passes slowly or retained in the colon where the sodium ions are replaced by potassium ions. The large intestine excretes potassium ions to a greater degree than does the small intestine. The efficiency of this process is limited and unpredictably variable. “It commonly approximates the order of 33% but the range is so large that definitive indices of electrolyte balance must be clearly monitored” [2].

SPS was approved by FDA in 1958 to treat hyperkalemia. This happened four years before the drug manufacturers were required to prove their effectiveness and safety. There has been no promising evidence that showed that adding sorbitol to the resin increases its effectiveness as treat for hyperkalemia. Due to growing number of cases, in 2009, FDA issued a warning advising against addition of sorbitol to prevent SPS related constipation and to speed up the delivery of resin to colon. The US Food and Drug Administration (FDA) posted safety labeling changes for Kayexalate powder on its web site. The warning reads, “Cases of colonic necrosis and other serious gastrointestinal adverse events (bleeding, ischemic colitis, perforation) have been reported in association with Kayexalate use. The majority of these cases reported the concomitant use of sorbitol.… Concomitant administration of sorbitol is not recommended” [3] (Figure 2). Upon review of our literature, there have been numerous cases documenting the diagnosis of the above mentioned complication being made hours to days after the drug was administered. Some of the common symptoms patients reported were abdominal pain, nausea, vomiting, diarrhea and or hematochezia. Additionally, Sorbitol can also lead to elevated renin levels which can further exacerbate or even cause mesenteric ischemia. Not surprisingly, patients with postoperative ileus and decrease colonic motility are at increased risk due to prolonged contact of drug with mucosa that can lead to intestinal necrosis. Classic evidence of angulated crystals of sodium polystyrene sulfate in areas of mucosal erosions, ulceration, or frank necrosis was seen in pathology and during the procedure. For these reasons it is best advised to avoid Kayexalate in post-operative and kidney failure patients to treat hyperkalemia [4].

Sodium polystyrene sulfonate (SPS) potassium binding resins increase colonic potassium excretion. The sodium polystyrene sulfate is usually mixed with sorbitol, a cathartic, to avoid constipation and fecal impaction. Intestinal ischemia is a recognized risk of sodium polystyrene sulfonate in sorbitol, with significant associated morbidity and mortality. Prompt surgical resection of the necrotic bowel permits rapid recovery of bowel function. We advocate for increased awareness of this side effect since prompt recognition and surgical intervention is the main stay of treatment, especially in unstable patients. Hence, high index of suspicion can be life-saving.