Copyright: © 2016 Ehler E, et al. This is an open-access article distributed under the terms of the Creative Commons Attribution License, which permits unrestricted use, distribution, and reproduction in any medium, provided the original author and source are credited.

Background: Miller Fisher syndrome is a well-known disorder that belongs to a group of conditions with a high level of antibodies against ganglioside GQ1b. It is characterized by acute onset of ataxia, areflexia, and ophthalmoplegia. In cases of acute-onset ophthalmoplegia without ataxia, the diagnosis is more difficult; therefore, it is frequently delayed. Case Report: We report one such case of rapid onset of internal ophthalmoplegia, followed by external ophthalmoplegia. The diagnostic process was challenging, but eventually, a high level of antibodies against GQ1b confirmed the diagnosis. Because the clinical and electrophysiological findings were limited only to the presence of anti-GQ1b antibodies, a combination with a generalized form of Guillain-Barre syndrome could be excluded. Conclusion: Consequently, the patient was not treated with immunotherapy. At 4 months, the patient had made a good recovery.

A patient presented to our hospital with acute onset of bilateral internal and external ophthalmoplegia, without ataxia or pain. Finally, high titers of antibodies against GQ1b provided confirmation of correct diagnosis. The purpose of this report is to describe the case.

In the second half of January 2015, a previously healthy 41-year-old male IT specialist developed a viral infection that was manifested by cough and throat pain. Three weeks later he developed eye fatigue, followed by blurred vision, and on the third day, by diplopia. Nine days later, he was admitted to our neurology department, with diplopia and mydriasis that was not reactive to light. Moreover, he made no attempt at eye convergence. He had limited movement of the eyeballs to the sides, more so to the left, and his left eye exhibited slight limitation of vertical movement. Downward gaze was within normal limits; however, he could not converge his eyes (Figures 1 and 2). The remainder of the patient’s neurological examination, including the mimic and skeletal muscles, was normal. 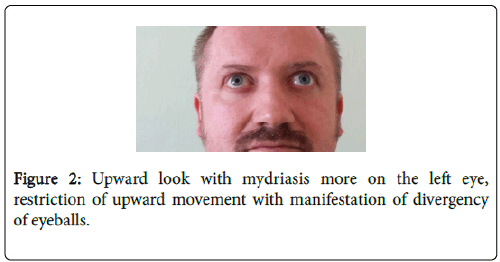 Figure 2: Upward look with mydriasis more on the left eye, restriction of upward movement with manifestation of divergency of eyeballs.

The patient’s laboratory findings were within normal limits, except for an elevated level of cholesterol (5.98 mml/l) and serum anti-GQ1b 413 units (normal value <10). All other values of anti-ganglioside antibodies in the blood were within the normal range (anti-asialo- GM1: 13.1; anti-GM1: 16.1; anti-GM2: 0.1; anti-GD1a: 6.4; anti-GD1b: 5.9).Until we obtained the results of the antibody levels against gangliosides, we had tested the patient based on his eye movement disorder. Magnetic resonance imaging (MRI) of the brain, orbits, and the cervical spinal cord, enhanced with gadolinium, showed no abnormality. MRI angiography of intracranial and extracranial cerebral vessels was negative. Cerebrospinal fluid examination (chloride 127 mmol/l, glucose 4.31 mmol/l, protein 0.33 g/l, lactate 1.70 mmol/l, and 1 leukocyte in 1 μl) was normal. There was positivity for paraneoplastic anti-SOX1 antibodies, and the patient’s oncological screening (including a CT scan of his abdomen and chest) turned out negative.

VEP (visual evoked potentials) with prolonged N-P-N complexes may have been an indication of slight impairment in the visual pathway. Median nerve SSEP, BAEP, and MEP were within normal limits.

We did not find any cause for the combined internal and external ophthalmoplegia other than the prominent increase of anti-GQ1b level. We concluded that this was definitely one of the anti-GQ1b syndromes – “ophthalmoplegia without ataxia”. After 14 days of hospitalization, a gradual regression of the patient’s external ophthalmoplegia became apparent, with latency prolongation. Moreover, there was regression of mydriasis. We did not find any evidence of a combination of isolated ophthalmoplegia and a generalized form of Guillain-Barre syndrome. Therefore, we did not administer immunotherapy. Four months later, the patient exhibited diplopia only on extreme left lateral gaze (he was unable to complete outward movement of the left eyeball), and his pupils were within normal limits. He returned to work and was allowed to drive.

The pathology of the pure form of FS is not clear. The primary electrophysiological finding in FS is an abnormality in sensory conduction [5]. Immunohistochemistry showed sequential pathological changes starting with IgG deposits at the nodes, complement activation, and formation of membrane attack complex at the nodal axolemma, disruption of nodal sodium channel clusters, lengthening of the nodal region, and detachment of the paranodal myelin terminal loops. Lengthening of the nodal region and detachment of paranodal terminal loops mimic paranodal demyelination; however, the pathology is on the axonal side [5]. In recent years, reversible conduction failure has been reported in patients with FS [4]. In FS, anti-GQ1b antibodies bind to axolemmal epitopes in the nodal region and to epitopes on myelin sheaths in the paranodal region. FS is a typical nodo-paranodopathy, and not a myelinopathy. Anti-GQ1b antibodies are highly enriched in the paranodal regions of the extramedullary portion of the oculomotor, trochlear, and abducens nerves. In cases of internal ophthalmoplegia, anti-GQ1b antibody may be present in the ciliary ganglia [1]. In our patient, who was showing internal and external ophthalmoplegia without ataxia, serum antibodies against GQ1b increased by 413%. However, his cerebrospinal fluid findings were negative.

Diplopia is usually the first symptom of FS, followed by limb or gait ataxia within days. Additionally, there may be mild distal paresthesia, dysphagia, or mild proximal limb weakness in up to one half of cases [4]. External ophthalmoplegia is seen in all FS patients; on the other hand, internal ophthalmoplegia is observed only in a few cases of FS [3]. In patients with anti-GQ1b antibodies who exhibit ophthalmoplegia but no ataxia, there is a separate syndrome – ophthalmoplegia without ataxia. Among large clusters of Japanese patients with the anti-GQ1b antibody syndrome, internal ophthalmoplegia was present in 35% of patients with FS [4]. As for our patient, the earliest symptom, on the first day, included eye fatigue, followed by blurred vision on the second day, and diplopia with horizontal separation on the third day. Subsequently, he developed moderate ptosis, mydriasis. His only prevailing health problems were blurred vision with inability to read (including inability to read using only one eye), moderate ptosis, and diplopia.

Electrodiagnostic findings in FS are abnormal in most patients with absent or low-amplitude sensory nerve action potentials (SNAP) or sural sparing. [3]. H-reflex studies have shown absent responses with frequently normal SNAP amplitudes, suggesting selective involvement of Ia afferents. The pattern of sensory electrophysiology in Fisher syndrome is characterized by predominant involvement of Ia afferents of muscle spindles, with relatively preserved cutaneous afferents and without evidence suggestive of demyelination [6]. Our patient had normal H-reflexes (amplitude and latency) in the tibial and median nerves, which was consistent with preserved Ia muscle spindle afferents, and consequently, the absence of ataxia.

An analysis of sera of patients with Fisher syndrome for anti-GQ1b or anti-GT1a antibodies revealed that one half of these patients had the following antibodies: anti-GM1, anti-GD1a, and anti-GD1b. Based on antibody specificity, the FS-associated antibodies were subdivided into 3 types: GQ1b-specific, GM1/GQ1b-reactive, and GD1a/GQ1b-reactive [7]. “Anti-GQ1b syndrome” is a term used to describe some variants of Guillain-Barre syndrome with high levels of anti-GQ1b antibodies – Fisher syndrome, Bickerstaff brainstem encephalitis, acute ophthalmoplegia without ataxia, and ataxic polyneuropathy. FH/GBS overlap syndrome is characterized by Fisher syndrome (ophthalmoplegia, areflexia, and ataxia) and progressive tetraparesis with monophasic course. In addition to anti-GQ1b antibodies, anti- GT1a, anti-GM1b, anti-GD1g antibodies are present. Some patients with the overlap syndrome need artificial ventilation. In FH/GBS overlap syndrome, immunological therapy is indicated.

The differential diagnosis of acute ophthalmoplegia includes cerebrovascular diseases, aneurysms of the internal carotid artery, brainstem tumors, infections, diabetes mellitus, multiple sclerosis, and myasthenia gravis [1]. In individual cases, adequate investigation (neuroimaging, cerebrospinal fluid examination, and biochemical and hematological values) enables to rule out all of these causes. Ophthalmoplegia associated with ataxia and areflexia is not always FS. In fact, it can be caused by several pathological conditions. For the diagnosis of acute ophthalmoplegia without ataxia, the mandatory criteria include: an acute or subacute onset of external or internal ophthalmoplegia, the absence of other neurological symptoms, the presence of anti-GQ1b IgG titers, and the exclusion of other identifiable causes [4]. In our patient, these criteria were fulfilled.

This work was supported by the grant MH CZ- DRO Faculty Hospital in Hradec Kralove (long-term organization development plan) (UHHK, 00179906) and by the grant PRVOUK: P37/08.