Copyright: © 2015 Hatlen P, et al. This is an open-access article distributed under the terms of the Creative Commons Attribution License, which permits unrestricted use, distribution, and reproduction in any medium, provided the original author and source are credited.

Introduction: In selected patients superior survival has been observed when treated aggressively for lung cancer and brain metastasis (BM). The aim of the study was to evaluate treatment-modalities and survival in our region retrospective.

Method: Retrospectively we compared survival for lung cancer patients treated either with microsurgery or Gamma knife surgery (GKS) for BM to a control group (N=510) patients with lung cancer stage IV and a mean age of 68 years.

Conclusion: Lung cancer patients with BM, also more than 1, show a significant better overall survival after receiving aggressive BM treatment. The size of the BM seems to be less important.

Different treatment options have been evaluated in studies. Radiotherapy alone or in combination with target therapy (EGFR-TKI) seems not to improve the survival, 3-4 month vs. 6 month respectively [7,8]. Chemotherapy was believed to have a limited role because of the opinion that chemotherapy does not cross the blood brain barrier. However, studies show an improved survival in patients treated with chemotherapy, 15 month vs. 4 month [9].

The survival rates in patients with BM treated with ablative therapy, like surgical metastatectomy (resection), Stereotactic Ablative Radiotherapy (SABR), or Gamma knife Surgery (GKS), is highly variable but seems to be better in highly selected patients [10] compared to other treatment options. One study showed a 5 year survival in these patients is about 20% [11]. In one study the 2 year survival was 54% [12]. Different prognostic factors are discussed in the literature. It seems that the size of the larges metastasis and the total volume is more important than the total numbers of BM in radiosurgery [13]. Other significant favorable prognostic factors appear to be female gender, adenocarcinoma, a small number of BM (1-3) and absent extra cranial metastases [14].

The aim of our study was to evaluate treatment modalities (microsurgery and GKS), prognostic factors affecting the survival in patients with lung cancer and brain metastasis in our lung cancer population and to describe our experience in this field

In the period January 2006 to December 2014 all patients coded with the International Classification of Diseases (ICD) ICD-10 codes C34.0-C34.9 (lung cancer) and C79.3 (brain metastasis) and the NOMESCO Classification of Surgical Procedures (NCSP) code AAB00 or AAB10 (resection of brain metastasis) were identified with the help of our patient administrative system (PAS) and evaluated for this study. Patients from our region who were referred to the University hospital in Bergen for treatment with GKS in the period 2006 to 2014 were evaluated for this study as well. After the medical journals were reviewed patients were included who had received both curative treatment for their lung cancer (surgery or radio chemotherapy) and either surgical or GKS treatment for their brain metastasis.

The survival data have been compared with published survival data for lung cancer patients in stage IV from the middle region of Norway (N=510), further in the article called control population.

The following study variables were registered: Sex, age at the time of lung cancer diagnosis, T and N stage, numbers of BM and the diameter of the largest BM (measured by CT scan or MRI) and the type of treatment modality for BM (microsurgery or GKS). The Charlson index [15] was calculated for each participant and included in the analysis

Approximately 650,000 people lived in this region in 2010. This population is considered representative of the Norwegian population, but the region lacks larger cities, has a lower educational and income level, and the proportion of smokers is slightly below the mean in Norway.

The Kaplan-Meier method was used to compare the overall survival (OS) rate, from the date of lung cancer diagnoses, in the study population to the control population. Additionally the 1-year, 2-year and 3-year survival rates were calculated. When the Log Rank test showed statistically significant differences for survival we used the adjusted Cox Regression model to adjust for confounders mentioned above. Between groups differences in known prognostic factors were tested with the chi-square test. Hazard ratio (HR) is reported with 95% confidence interval (CI), and statistical significance was defined as p ≤ 0.05 (two-sided). Statistical analyses were performed using PASW version 22 (Predictive Analytics Soft Ware IBM Corporation, New York 10589, USA).

The Regional Committee for Medical and Health Research Ethics have approved the current study (REK# 2014/1801).

After reviewing all medical journals and exclusion 42 patients (study population) with non-small-cell lung carcinoma (NSCLC) were included in our study. The demographical characteristics are given in Table 1. The control population (N=510) had a mean age 68 years (Table 1).

Table 2: Characteristics of the BM: distribution by the number of as well as the size of the BM, in all lung cancer patients (treated with microsurgery and Gamma knife surgery). As shown most common were 2 or less numbers of BM, and a size below 30 mm in diameter.

The exact cause of death in both the study population and the controls was unknown (Table 2). 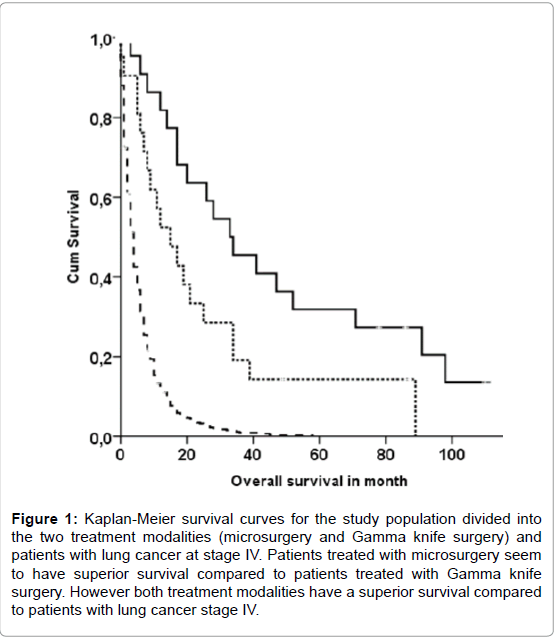 Figure 1: Kaplan-Meier survival curves for the study population divided into the two treatment modalities (microsurgery and Gamma knife surgery) and patients with lung cancer at stage IV. Patients treated with microsurgery seem to have superior survival compared to patients treated with Gamma knife surgery. However both treatment modalities have a superior survival compared to patients with lung cancer stage IV.

No significant difference in survival was found between patients with N-1 and N2 disease (N=15), however the OS was significantly reduced in patient with N3 disease (N=8) compared to N1-2 disease (p=0.008).

Our study shows that patients treated for BM and curative treatment for lung cancer have a superior survival benefit compared to the control population (lung cancer patients in stage IV) receiving standard treatment. Several retrospective studies have reported a prolonged survival in patients with lung cancer and single BM who have been treated with microsurgery for BM and lung cancer. The reported 5 year survival in the literature varies from 7-27% [16-18] and is in line with our results, that was 20% 5 years survival

Results in literature are conflicting whether microsurgery of BM gives a better local control compared to radiation or not [21,22]. In our study the longest OS was found in patients treated with microsurgery for their BM compared to patients treated with GKS. These results may be partly explained with a higher N-stage in our patients receiving GKS. A possible cross over between microsurgery and GKS was excluded as an error. However our study population was small and the results must be interpreted with caution.

Many studies have shown that females with lung cancer have a longer OS [23-25]. However we did not find a sex specific difference in OS in our population. This may be explained by our selective study population, selection bias. A possible explanation may also be that our study group was too small to show such difference.

In our study population there was a predominance of males (60%). We cannot explain this finding since there was no statistical difference between males and females in Charlson index, age, T-stage, N-stadium, numbers of BM or the maximum size of the BM.

Prognostics factors in our study population were age at diagnosis and the numbers of BM. Patients with a long disease-free interval before the occurrence of BM had a better survival compared to early or simultaneous diagnosis of BM, however aggressive treatment of BM in these patients still yielded a superior OS compared to stage IV disease.

In our study the OS in lung cancer patients with BM is affected by the stage of lung cancer (N stage and T stage), by the age of the patient and the numbers of BM. In the literature there is still a discussion of what factors are important for the prognosis [16,26,27]. Nearly all studies were retrospective and only with a small number of patients, generating a problem of validity and correct definition of prognostic factors.

Many factors affect survival. Epidermal growth factor (EGFR) and v-Ki-ras 2 Kirsten ras sarcom (KRAS) mutation status has impact on survival [28]. In our population the EGFR status was unknown. On the one hand this can influence the results, one the other none of the patients had received EGFR tyrosin kinase inhibitor (TKI). Furthermore we assume that the distribution of EGFR mutation should be similar in both the study population and control population. The survival benefit seems to be too pronounced for the EGFR status to be the only explanation.

Performance status (PS) may also be prognostic factors but in many of our patients the PS at the time of diagnosis was not registered and therefore a retrospective evaluation of the PS would not be adequate. Since all patients in the study population have been treated with curative intention, we assume that the PS must have been between 0-1 in our study population.

Comorbidity was included in our analysis and seems not to be a prognostic factor when the patients were operable and healthy enough to receive curative treatment.

Aggressive treatment for brain lesions, by microsurgery and/or GKS, showed significantly better outcome in our study as shown in other studies. However, these results do not prove that microsurgery and/or GKS is superior to other treatments. There are many different biases that may have impact on decision making and finding the optimal treatment. The choice of the treatment modality depends on many factors such as PS, number of BM, location and size of the BM and the accessibility. Prospective, randomized studies with well defined criteria at each level are needed to decrease these potential biases, both in selection cases and therapies.

In the treatment of patients with lung cancer, not only survival but also quality of life (QoL) is an important issue and should be remembered when choosing the treatment modality and especially when conducting a future prospective study. We have no information about QoL in our study group neither in our control group. So we do not know how the two treatment modalities (microsurgery and GKS) affect the QoL in our patients.

Further we do not know the cost-benefit of aggressive treatment in these patients.

Both QoL and the cost-benefit aspect are important questionaries. Being a retrospective study, we can not provide an answer to these questions but further studies should include these topics.

There are several limitations of the study. The study population was small, only from one center and the design was retrospective and giving the potential for selection and recall bias. Several studies have shown an association between the EGFR status and survival. Given the time period for our study we have only information in a few patients about the EGFR status. However the main results are consistent with other studies. Further we have no information whether the patients in the study population have received addition treatment (chemotherapy/ thoracic ration). There is an urgent need for prospective studies to confirm the important survival results from several retrospective studies.

Selected patients with lung cancer and brain metastasis seem to have a prolonged survival when treated aggressively for both the thoracic and cerebral malignity compared to lung cancer patients with stage IV disease. Age and the number of BM were significant prognostic factors. Microsurgery of BM seems to have a survival advantage; however patients treated with GKS have a prolong survival compared to stage IV as well. The size of the BM was less important for survival. Further prospective studies in this field of research are strongly needed. The authors opinion is that all patients with curative treatment for lung cancer and BM, also with more than one BM, should be considered for aggressive treatment for BM.