Alleged Medical Malpractice: A Retrospective Study of Forensic Evaluation of Cases in Cairo and Giza regions-Egypt(2009-2011)

Copyright: © 2014 Hassan DAE, et al. This is an open-access article distributed under the terms of the Creative Commons Attribution License, which permits unrestricted use, distribution, and reproduction in any medium, provided the original author and source are credited.

Most claims of medical malpractice in Egypt are dealt with at the Forensic Medicine Authority. But in all other countries, data on malpractice cases, including those with lethal outcome, is available in the files of the institutes of forensic medicine. This subgroup is of special importance, since death is the most severe outcome and the reproach to whom that has caused the death of a patient is the most severe claim [5].

In most participating institutes, forensic pathologists already have access to the relevant clinical records before autopsy. When a comprehensive written report is needed, all clinical data are available since they are necessary for subsequent clinico-pathological correlations. The main task of a forensic pathologist is to give an opinion on the cause, manner and causation of death. Based on the autopsy findings and medical report analysis, the forensic pathologist is often able to rule out medical negligence [6].

In all cases, reports of clinical experts in the appropriate specialty are recommended. In all cases, the forensic pathologist raises the questions which should be addressed by the clinicians, based on the autopsy findings.

The types of medical malpractice are classified as follows:

An important reason for differences is the taxonomy and the mode of measuring errors and adverse events in health care [14]. In the discussion of adverse events in health care, different terms are used regarding the epidemiology and the quality of care, but within the legal framework; precise terms are strictly born in mind. Among many organizations, the Council of Europe has published a glossary of terms related to patient and medication safety [15]. Some of these useful definitions are as follows:

ii. Medical malpractice in penal law is defined as an adverse event (injury, harm) that is caused by medical negligence.

iii. Negligence is a preventable mistake due to a breach of the duty of care. There must be a causal connection between a mistake and an injury, and this causal connection must be stated without reasonable doubt.

In civil law, medical malpractice is defined as follows: The defendant (doctor) owed duty of care to the plaintiff (patient). The doctor breached this duty of care by failing to adhere to the standard of care expected. The standard is the quality that would be expected of a reasonable practitioner in similar circumstances. This breach of duty caused an injury to the patient. Methods like chart reviews, direct observation of treatment, and clinical surveillance, are better indicators of active errors or adverse events [14]. Therefore, the rate of adverse events is much higher in epidemiological studies in comparison to malpractice claims where cases can only be evaluated retrospectively with the information available in documents.

Due to these reasons, there is a great litigation gap between data from epidemiological and quality of care research, and data on legal proceedings.

In Egypt, reliable data on medical malpractice charges in penal law is missing, together with data on lethal cases.

To obtain a broader collection of data, we carried out a standardized retrospective analysis on medical malpractice claims in lethal cases at the Forensic Medicine Authority, which covered the time period from 2009 to 2011. The data was made completely anonymous. For this period, 4095 autopsy reports were written; of which 243 (5.9%) were due to claims of medical malpractice

The data was analyzed regarding the following variables;

1. How many cases are there per year?

2. What is the rate of medical malpractice reports and autopsies?

3. Are there regional differences?

4. Which specialties are more affected?

5. Who is more concerned with malpractice claims, hospital doctors or doctors in private practice?

6. What is the cause of the legal proceeding?

7. How did the cases come to the attention of the prosecutor general?

8. What kind of patients is involved?

9. What mistakes were made and reproached?

11. Are the epidemiological data on medication errors reflected in the files of patients?

The criminal proceedings were mainly against public hospital doctors, and nearly one third of the cases were against private hospitals, with a small percentage (3%) of cases involving doctors in private practice (Table 2).

Table 2: Classification of cases according to medical specialty.

According to the classification of accusations, most medical malpractice claims were on the account of negligence, complications within surgical therapy, medication errors or mistakes in care.

Cause of preliminary proceeding/confirmation of medical malpractice

Table 3: Type of medical malpractice accusations and the result of expert opinion.

Age and sex distribution of patients 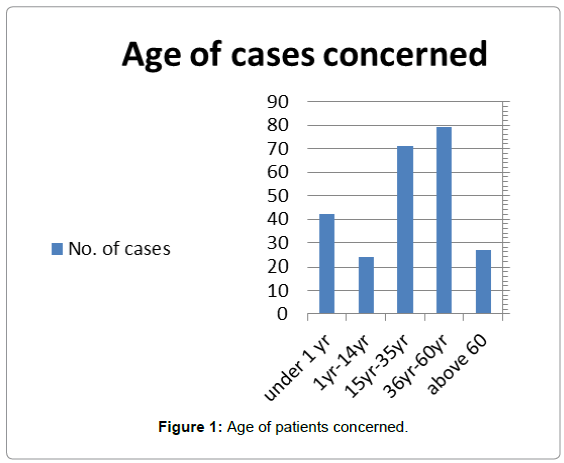 Medical malpractice claims in penal law have increased over the years in all forensic medicine institutes [1,2].

According to legislations in some European countries, the doctor who has made a mistake while treating a patient is allowed to perform the external examination of the corpse and determine the cause and certify the manner of death by himself [3,4]. It would probably be advantageous to have an independent physician performing the external examination in such cases to avoid conflicts of interest.

Although surgery is the discipline with most accusations of medical malpractice, the rate of confirmed cases with approved causality is 17%.

The anesthesia team can often be readily and usually unjustly blamed for deaths which occur during the administration of anesthetics. The rates of anesthetic-associated deaths may vary depending on study design, study period and study population. It has been stated that the risk is increased in children, in infants under the age of 1 year and in people over 65 years [16].

In our study, anesthesia was blamed for the deaths of 31 (12.76%) of all cases, and it was the third medical specialty that was accused with medical malpractice, although confirmed cases were only 9 out of the 31 claimed cases.

According to Eke et al., it has been shown that in a large number of cases of death during the administration of an anesthetic, the team of anesthetists was accused, and the mishap was taken to legal authorities [17-20].

However, in some European countries, surgeons are at the top of specialties accused, and also proven, of medical malpractice [6,7]. The arbitration committees are dealing mainly with malpractice complaints in living patients, and rarely with lethal cases. This may give a hint that the composition of cases in different registers varies considerably and experiences from all registers are of importance to get a realistic impression of the malpractice situation [8-10].

The frequency of medico-legal autopsies due to medical malpractice differs between Cairo and Giza regions of Egypt, and even for each region over the years. Reasons are that the areas are different concerning the number of inhabitants, and that the autopsy rate may be influenced by information about cases under media coverage (high profile cases).

In prospective clinical studies, medication errors make up a great part of adverse events [11-13]. However, medication errors are not represented in such a high rate in its own category. Beside medication errors, hospital infections are frequently encountered together with adverse events, which are also hardly represented in our retrospective analysis. Reasons for this discrepancy may be due to the fact that the treating physicians normally do not realize adverse drug events themselves and therefore do not report them [12] and that hospital infections may have a mild course not leading to death. Also, in other registers medication errors or adverse drug events are under-reported [9].

Autopsy is nowadays an efficient method of clarifying medical malpractice claims [20-22]. The great value of autopsies for verifying medical malpractice becomes also evident by a recent study from the UK [23]. The National Confidential Enquiry into Peri-Operative Deaths (NCEPOD) has been auditing data on deaths within 30 days of any surgical operation or invasive diagnostic procedure under local or general anesthesia in England and Wales since 1987. Autopsy often yields findings not suspected in living persons. For instance, major discrepancies between clinical diagnosis and postmortem findings are encountered in 20.3% (81 of 346) of autopsies. Similar results are known from other studies [20-22]. Twenty-one percent of surgeons receiving a copy of the autopsy report indicate that clinically unexpected findings had emerged.

According to an American evaluation of autopsy reports in litigation cases, doctors accused of medical malpractice do not have to fear the autopsy. Fear of autopsy findings is an obstacle to the pursuit of excellence through uninhibited outcome analysis.

Paradoxically, when a physician is accused, there is a high probability that it will be for rendering non-negligent care. Nevertheless the autopsy data are of special relevance for the identification, evaluation and prevention of errors, autopsies are a valuable source of information for improvement of patient safety. This has recently been underlined by the Council of Europe which advised in its recent recommendations on the management of patient safety and prevention of adverse events in health care, to review the role of other existing data sources, such as patient complaints and compensation systems, clinical data bases and monitoring systems as a complimentary source of information on patient safety [15].

The World Alliance of Patient Safety recommends alternative sources of information for patient safety in medical malpractice claims [26]. In their opinion, analysis of claims has identified the factors that increase the probability of a foreign body being retained following surgery. However, they do provide data on events that are significant – serious injuries – as well as data that are typically much more comprehensive than those provided to most reporting systems [26].

Lethal cases represent the most dramatic events that can occur during medical care. Without autopsies, these cases cannot be properly clarified. Investigating lethal cases of medical malpractice and their objective clarification by autopsies as additional sources for the evaluation and prevention of errors, requires sampling of cases, not only on a local but also on a national, or better, international level. The special value of objective data in forensic pathology and toxicology becomes also evident from the study of adverse drug events [11,12].

The precise evaluation of autopsy reports in cases of medical malpractice is also a task of forensic medicine as a contribution to increase patient safety by the identification and reporting of errors [27].

Autopsies are not only essential for expert evidence in a suspected case, but also for preventing similar cases. They provide data on significant events.

Compared to epidemiological data on the frequency of adverse events or death as a consequence of negligent adverse events, malpractice proceedings are under-reported; there are – obviously – a great number of unreported cases.

Rare but serious events detected at autopsy have to be reported and evaluated, and risk factors identified for preventive measures. An often-heard criticism of the malpractice system is that it fails to prevent medical mistakes. However, it has to be acknowledged that it has made great success in malpractice deterrence (e.g., the reduction in mortality rate after the adoption of monitoring guidelines in anesthesia) [28,29]. This was a step that was taken largely in response to high malpractice charges.