Copyright: © 2017 Ahmed KSS, et al. This is an open-access article distributed under the terms of the Creative Commons Attribution License, which permits unrestricted use, distribution, and reproduction in any medium, provided the original author and source are credited.

Background: Deficiency or excess of trace elements can induce metabolic disorders and dysregulate cell growth, and even lead to mutations and tumorigenesis. Many reports have indicated a direct association between micronutrient deficiency and cancer mortality. Prostate cancer is the sixth most common cancer among men in Saudi Arabia, yet there are few studies of the association between trace element levels and prostate cancer in the country.

Objective: This study aimed to explore the association between concentrations of select hair trace elements, including selenium (Se), zinc (Zn), copper (Cu), manganese (Mn), and iron (Fe), as long-term indicators, and tumorigenesis of prostate cancer in Saudi Arabia. 1.2 Patients and Methods: The study included 58 patients with prostate cancer, 64 with benign prostatic hyperplasia (BPH), and 52 healthy controls. Full history and clinical data were recorded for all subjects. Hair samples were collected from the nape of all subjects, and levels of Se, Zn, Cu, Mn, and Fe were analyzed by inductively-coupled plasma mass spectrometry.

The realization of the trace element roles in human has increased through the past five decades [7]. Trace elements augment the immune system, and their imbalance can promote metabolic disorders, cause cell proliferation abnormalities, and promote tumorigenesis [8,9]. Fluctuating concentrations of trace element ions can influence antioxidant enzyme activity; because these elements complex with enzymes responsible for antioxidant protection [10], oxidative processes intensify when there is an imbalance of trace elements. Environmental trace elements including selenium (Se), zinc (Zn), copper (Cu), and iron (Fe) have been implicated in various types of cancer [11,12]. Studies have shown elevated levels of Cu in bladder, breast, prostate, and liver cancers [13], and the Cu/Zn ratio is used to assess patient prognosis [14,15]. Additionally, several studies showed that Zn supplement may protect against free radical damage [16] or that Zn levels are decreased in patients with certain malignancies [17]. Se and Zn levels have been correlated to prostate cancer risk [18,19]; higher Se levels are related to a lower risk of many types of neoplasms, including lung, colorectal, prostate and possibly bladder [20,21]. Selenium is thought to inhibit carcinogenesis through many mechanisms including reduction of oxidative stress and inflammation, enhancement of the immune response, induction of apoptosis and cell cycle arrest as well as transactivation of DNA repairing genes [22,23].

Conventional blood analysis can indicate the trace elements content at the day of sample or a few days prior to the blood analysis [24]; however, trace element analysis in hair can determine the metal content for the past 3-6 months prior to analysis. Hair analysis can overcome fluctuation due to daily food intake and may provide noninvasive, low cost and measurement of large number of elements at a time. On the other hand, some limitations may interfere the accuracy of results as age, gender, ethnicity and inter-individual variability [25]. There is an increased interest towards effectiveness of trace elements on metabolic pathways [26,27]. This study aimed to explore the alterations of the trace elements Se, Zn, Cu, Mn, and Fe levels in hair of prostate cancer patients in Saudi Arabia.

This study included 58 patients with prostate cancer (mean age 71.1 ± 5.4 years), 64 benign prostatic hyperplasia (BPH) patients (mean age 69.3 ± 7.4 years), and 52 healthy male individuals (mean age 68.8 ± 7.8 years) who were randomly selected among volunteers of matched socio-economic status and who did not have any known disease and had no history of alcohol or drug abuse. Participated individuals who were taking elements supplementation for the past three months were precluded from the study. Prostate cancer patients were classified into localized (n=46) and metastatic (n=12). BPH and healthy male individuals (n=116) were grouped as controls. Prostate cancer patients underwent digital rectal examination, trans-rectal ultrasonography guided biopsy of the prostate, computed tomography scanning of the pelvis, bone scanning, and histopathological examination to assess metastatic disease and determine disease stage.

Scalp hair specimens were collected, weighed, and stored at 25°C till washed, digested and analyzed within 3 weeks of sample collection. For each sample of 5 mg hair, successive washes of acetone, deionized water and 0.5% Triton X-100 solution were performed [28,29] then hair sample was digested by nitric acid, hydrogen peroxide, and deionized water followed by dilution to 10 mL [30]. Analysis of hair trace elements (Se, Zn, Cu and Mn) concentrations were carried out by ICP-MS (Perkin Elmer 7300, Perkin Elmer, USA), according to manufacturer’s instructions (Figures 1 and 2). 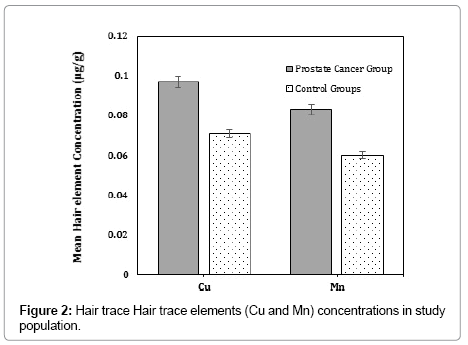 Data are expressed as the mean ± standard deviation (SD) for different studied parameters and possible associations between them. Data between groups were compared using one-way analysis of variance (ANOVA), and the differences between means of two of three studied groups were analysed using an independent-sample t-test. The level of significance was set at a p<0.05. IBM SPSS Statistics v20 (IBM, USA) was used for the statistical analyses.

Trace elements are essential structural components of biological tissues or molecules, but their roles in the development or inhibition of cancer are complex. These elements have been the subject of investigation because of their biological necessity as well as their toxicity at concentrations that exceed physiological levels [31].

Many reports indicated that low levels of Se may correlate with carcinogenesis and is a risk factor of cancer [34]. Our results revealed that hair Se concentrations were significantly decreased in prostate cancer patients than in BPH patients and healthy individuals. Se complexes with blood proteins and plays a substantial antioxidant role by eliminating free radicals. It is also reported that Se may prevent tumorigenesis in otherwise higher-risk patients [34].

Zn is an essential metal required for the synthesis of DNA, RNA, and proteins, as well as for enzymatic activity of Zn-containing enzymes [35]. It is known to be a physiological antagonist of copper and may be responsible for the hypozincemia observed alongside hypercupremia in malignancies [36]. Our study indicated a statistically significant decrease of hair Zn concentrations in prostate cancer patients compared to control individuals. Additionally, Zn deficiency increased the risk of prostate cancer, which is consistent with previous studies [37,38].

A direct interference of Zn with intestinal absorption of Cu can result in higher levels of free Cu that can then displace Zn from metallothionein, because of copper’s high affinity for this protein. This postulated mechanism may explain the decrease observed in hair Zn concentrations that accompanied elevated Cu concentrations measured in this study.

Iron is an essential trace element that is crucial to normal cell functioning, and its deficiency or excess is associated with several diseases [39]. Iron levels are significantly elevated in malignant glioma patients [9], and it is possible that pathogenesis is mediated by the direct effect of iron overload on the formation of hydroxyl-free radicals from hydrogen peroxide and superoxide via the Fenton and Haber- Weiss reactions [39]. Our results indicated that hair Fe concentrations were significantly elevated in prostate cancer patients compared to BPH patients as well as healthy individuals.

Manganese is an essential trace element in the body that has several biochemical and chemical characteristics similar to iron. Some previous studies revealed a metabolic interaction between the Fe and Mn, especially at the level of intestinal absorption [40,41]. In the present study, we observed a significant difference in the concentration of hair Mn levels in prostate cancer patients compared to control group.

The Ethical Research Committee at the Faculty of Medicine, Umm Al Qura University, and affiliated hospitals approved this study. Informed consent was obtained from all patients and healthy subjects; the aim of the study and the procedures that would be required were described to them beforehand. All subjects were assured that they could choose to discontinue their participation in the study without jeopardizing the medical care being given to them, including treatment and follow-up.