Copyright: © 2016 Yagi I, et al. This is an open-access article distributed under the terms of the Creative Commons Attribution License, which permits unrestricted use, distribution, and reproduction in any medium, provided the original author and source are credited.

Recently, a various type of steel connection technique has been developed, which aims to possess the multidemands on steel structures. In this study, a new fitting connection technique for steel square tube is suggested, and this joint consists as follows; lightweight steel square tube is just embedded to steel connector, and an adhesive is filled to the clearance between each member as filler, and a pin is inserted as a fail-safe mechanism against the uplift of the column. The adhesives adopted on this connection are widely used to adhere nonstructural members such as tiles and marbles in Japanese architectural building field. The advantage of this connection is not only improvement of workability due to needless of bolting and welding but also the adjustment of the bending strength and rigidity by filling methods and materials. This study investigates the resistant mechanism subjected to bending experimentally. Herein, the loading test is conducted as parameters with the existence of adhesives, pin and loading path. From test results, it is confirmed that the bending strength and rigidity are improved by the filling effect of adhesives, and the maximum bending strength is enhanced by the resistance of a pin during the ultimate state. Furthermore, the stress diagram subjected to bending is investigated from the test results, and a kinematic model of this connection considering the exfoliations of adhesives is suggested. It can almost evaluate the strength of the test results well.

Generally, bolting and welding are used as joint components in steel structures. In perspective, a connection of steel structures is divided into rigid connection, semi-rigid connection and pin connection by the fixation of the connection. However, the joint with various restoring force characteristics and structural performance are proposed and developed in recent years [1]. For example, the socket connection method not using bolting or welding is suggested, and it is expected to ease the inclination and displacement of jointed materials [2]. A fitting connection method on steel structures is sometimes adopted which aims to possess the multi-demands such as improvement of workability, disassemble, and any other purposes. In this study, a new fitting connection technique for steel square tubes is suggested as shown Figure 1. This proposed method is that a lightweight steel square tube column is just embedded to another member by not using bolting and welding. A clearance between each steel tube is filled with organic or inorganic fillers so as to prevent from the slipping and adjust the bending rigidity and strength for structural design. Herein, inorganic adhesive materials are adopted to fill the clearance as filler on this connection, which adhesives widely used to adhere nonstructural members such as tiles and marbles in Japanese architectural building field. This paper proposes a new type embedded connection method using a lightweight steel square tube, and also, an experimental study is conducted to clarify the resistant mechanism and inelastic behavior of about the connection method Figure 1a. The loading test is performed as parameters with the existence of adhesives, pin and loading path.

A construction process of the embedded connection as shown Figure 1b is described below. First of all, adhesives are coated to a connector, and fit a column (an outside steel tube) into the connector. Finally, a pin is inserted as a fail-safe mechanism against the uplift of members. The construction process of embedded connection is simple so that its workability is excellent because of unnecessary of bolting and welding. 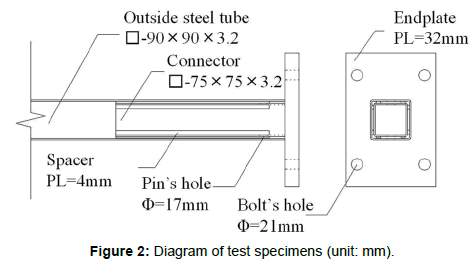 In this study, the loading test was conducted to verify the resistant mechanism of the embedded steel connection. The mechanical properties of steel elements are summarized in Table 1, and adhesive elements are presented in Table 2. In addition, Table 3 summarizes the test specimens. According to Table 3, the existence of adhesives, pin and loading path are considered as parameters. 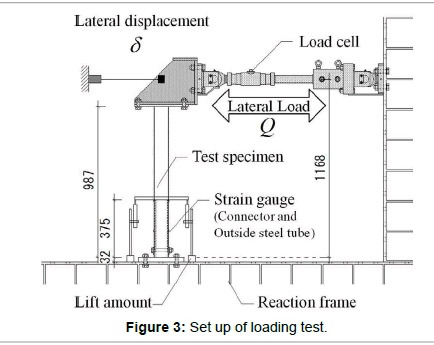 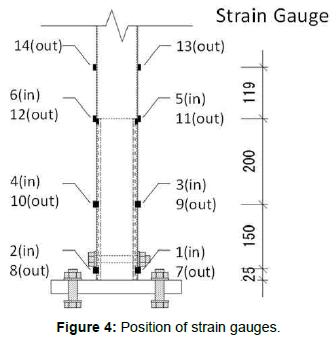 Figure 5 shows the moment-rotation angle curves of connection (M-θ curve) under monotonic loading tests. In addition, Figure 5 shows collapse modes and exfoliation of adhesives decided by the noise, observation and behavior of strain during loading test. And also, Table 3 shows the test results (Exfoliations of adhesives, yield strength, maximum strength, and bending rigidity). Collapse modes of the embedded connection were observed as follows;

Figure 6 shows a picture of section of specimens after monotonic loading test. From this figure, the exfoliations of adhesives were occurred in boundary layer between adhesives and an outside steel tube. According to Figure 5 and Table 4, in case of A-P-m and A-nP-m, the bending strength and rigidity were improved by the filling effect of adhesives. Figure 7 presents the test results of stress distribution of web. From this results in case of non-adhesive (metal touch), the stress was only transmitted little from connector to outside steel tube. By contrast, if adhesives were used as filler, the stress from connector to outside steel tube was increased by the filling effect. As a result, in case of adhesives filling, the bending strength and rigidity became high. From the result of Figure 5, it is confirmed that the bending rigidity shows almost same in both case of pin and non-pin, however, the maximum bending strength was enhanced during ultimate state in case of using pin. The pin’s whole deformation was observed after the loading test, thus the specimen is resisted bending moment by bearing pressure of a pin. Figure 8 shows the moment-rotation angle hysteresis curves (M-θ curve) under cyclic loading tests. And also, Table 5 shows the test results (Yield strength, Maximum strength, Bending rigidity). From the results of Figure 8 and Table 5, it is confirmed that adhesives prevent the slipping, and it improves the bending strength and rigidity at moment 0 in case of A-P-c and A- nP-c. Furthermore, in case of AP- c and nA-P-c, the bending rigidity shows almost same; however the bending strength was enhanced at ultimate (Figure 9).

The bending strength valuation plan at exfoliation of adhesives

The Figure 11 shows the analytical model assumed from test results. When axial force P by bending moment is loaded, it is assumed that shear stress distribution by adhesives is applied at tension side as Figure 12. Thus, following equation is established by condition of forces. 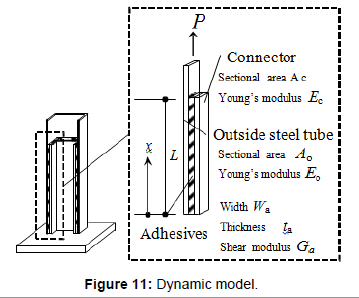 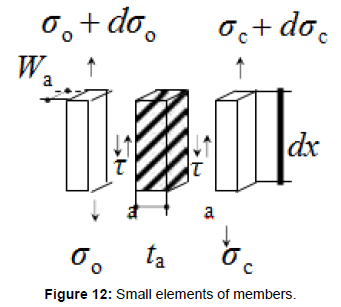 Ao, σo: Sectional area and stress of outside of steel tube.

E: Young’s modulus of outside steel tube and connector.

From equation (3), the bending strength of flange Mf is expressed by equation (4).

From Figure 7, the bending moment of web of outside steel tube and connector (Mwo, Mwc) at exfoliation of adhesives is calculated from the following equation (5).

to: Plate thickness of outside steel tube

Table 6 shows the comparison between theoretical and experimental value. The bending strength at exfoliation of adhesives is good agreement.

The Bending rigidity of embedded connection at exfoliation of adhesives

The displacement of embedded connection at exfoliation of adhesives is calculated by elastic curve equation. 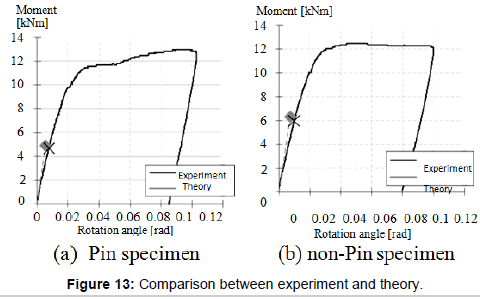 Figure 13: Comparison between experiment and theory.

In this paper, loading tests of embedded connection for lightweight steel square tube filled with adhesives were conducted to clarify the resistant mechanism and inelastic behavior as parameters with the existence of adhesives and pin. The main conclusions of this paper are:

1) If adhesives were used as filler, the stress from connector to outside steel tube was increased by the filling effect. As a result, in case of adhesive filling, the bending strength and rigidity became high.

2) The bending rigidity showed almost same in both case of pin and non-pin, however, the maximum bending strength was enhanced during ultimate state by bearing pressure in case of pin.

4) Theoretical equations of the bending strength and rigidity at the exfoliation of adhesives are proposed, and they are good agreement.