Copyright: © 2015 Jadeja SK, et al. This is an open-access article distributed under the terms of the Creative Commons Attribution License, which permits unrestricted use, distribution, and reproduction in any medium, provided the original author and source are credited.

One of the most important parameter over the past decade in VLSI design is the Power dissipation during manufacturing test, as the circuit consume much more power during test than functional mode of operation. This paper presents analysis of low power testing techniques by which Power optimized test patterns are obtained. The compaction technique has been validated using benchmark examples, and it has been shown that average 33% of test patterns have been reduced by which power is minimized. Evaluation of various techniques under consideration in this paper is carried out by open source tool ATALANTA for test pattern generation and MATLAB for optimization.

Testing is a process which ensures that the response of each fabricated circuit is acceptable. Production of authentic VLSI circuits depends strongly on testing which eliminates various faults caused by the fabrication processes. Switching activity increases during testing of different circuits compared to the normal operation of the circuit which raises the power dissipation and hence may lead to lower circuit manufacturing yield and reliability [1]. Different prominent approaches for low power VLSI testing which are well proven and widely used are discussed in. Combining compaction and test vector ordering technique reduces power dissipation during testing of combinational and sequential VLSI circuits. Experimental results, using compact and non-compact test sets, have shown that compact test sets have similar power dissipation during testing different circuits with reduction in testing time and computational time when compared to non-compact test sets.

Test power reduction in addition to fault sensing during test cube generation [2]. General test generation targets combinational and sequential circuits. The goal of general low-power test generation is to create a sequence of test vectors that cause a minimal number of transitions at inputs between any two consecutive cycles. 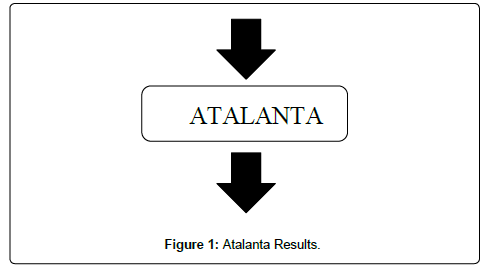 The aim of test compaction is to cut down the number of final test vectors. Test power reduction can also be achieved through test pattern compaction. Compaction is the work of combining multiple test cubes into one if they are compatible. Two test cubes, c1 and c2, are said to be compatible if two corresponding bits in c1 and c2 do not have opposite logic values [4]. Conventionally, compaction is conducted to reduce the final test vector count, it can also reduce test power if power is considered when compatible test cubes are merged. Compaction technique selects a target fault in such a manner that the risk of violating capture power limits is minimized [5]. 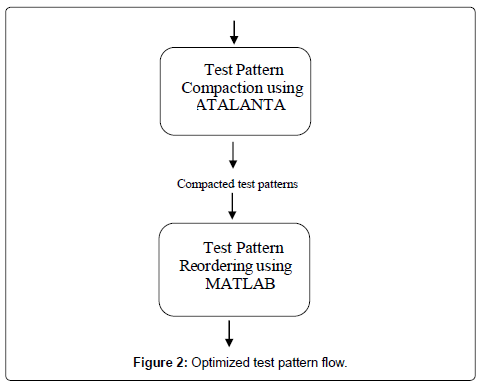 In this paper Hamming distance based ordering is done for minimization of transition between test patterns. Reordering using hamming includes following steps which are demonstrated with example of C17 benchmark circuit (Figure 3). 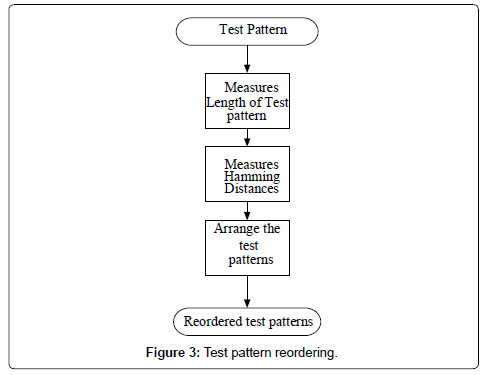 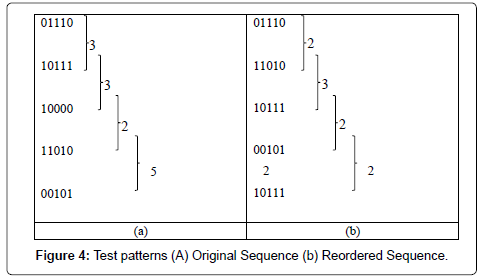 The example in Figure 4 shows the reduction in transition with the help of reordering. Test pattern of C17 benchmark circuit are reorder to minimize switching between test patterns.

As power is directly proportional to the switching activity as show in Equation, Power can be reduce by reducing switching (transition) between patterns.

After reordering the transitions of above test patterns are reduced from 13 to 9. Column wise ordering of test patterns is done in given example of Figure 4. Table 3 shows the experimental results of reordering technique applied on combinational benchmark circuits. Result shows that average reduction in transition is found 30%.

Test data compression technique is used to handle the problem of increased test data volume. The test data volume for manufacturing test of modern devices is increasing rapidly [7]. This is due to the facts that the transistor count for these chips is increasing exponentially and the use of advanced technology introduces new physical and timing related defects, which require new types of test. It is well known that power consumption during test is much higher than in the functional mode due to increased switching activity in test mode. Therefore, efficient techniques that minimize both test data volume and test power consumption are required. Techniques such as test data compression and built-in-self-test (BIST) are used commonly to handle the problem of increased test data volume.

Test compression call for compressing the number of test data (both input and response) that must be stored on automatic test equipment (ATE) for testing with a settled test set. This is done by adding some additional on-chip hardware before the scan chains to decompress the test stimulus coming from the ATE and after the scan chains to compress the response going to the ATE. This reduces amount of memory in ATE and even more importantly reduces test time because less data has to be transferred across the limited bandwidth between the ATE and the chip [8]. Moreover, test compression methodologies are easy to adopt in industry because they are compatible with the conventional design rules and test generation owns used for scan testing (Table 4). Test stimulus compression should be an information lossless procedure with respect to the specified (care) bits in order to preserve the fault coverage of the original test cubes. After decompression, the resulting test patterns shifted into the scan chains should match the original test cubes in all the specified (care) bits.