Copyright: © 2016 Elleuch W. This is an open-access article distributed under the terms of the Creative Commons Attribution License, which permits unrestricted use, distribution, and reproduction in any medium, provided the original author and source are credited.

Summary: Fibrous dysplasia (FD) of bone is an uncommon skeletal disorder with a broad spectrum of clinical expressions that affects primarily the craniofacial bones. It may be affected by the evolution of lesions over time and by the appearance of superimposed changes, such as aneurysmal bone cysts (ABCs).

We describe an unusual case of a cranial ABC accuring after long evolution of fronto-parietal FD in 16 years old girl. She was operated successfully with total removing of the ABC. After of follow up of 6 months, she was symptom free and CT scan revealed no evidence of recurrence.

FD is infrequent sequeletal disorder that affects mostly cranio-facial bones [1]. The occurrence of a concomitant FD and ABC in the cranial bones is extremely rare. We report a case of fronto-parietal FD with an ABC of a 16-year-old young woman.

A 16 years old woman, with a history of stabilized cranial FD, was admitted to our department for a quickly growing painless left parietal mass almost five years after diagnosis. She noticed that the lesion expanded in the four last months.

Physical exam showed a tender mass in the left parietal region approximately (6 cm/4 cm). We find no changes in the overlying skin (Figure 1). 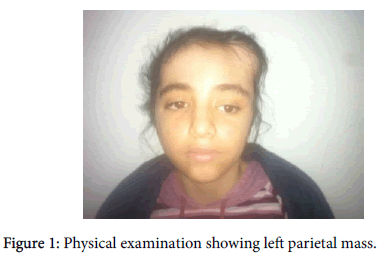 CT scan three-dimensional reconstruction revealed a unilocular cystic lesion of 6 cm diameter in the parietal bone with osteolysis of the outer and inner skull table. The MRI showed that the cyst had “fluid– fluid levels” which strongly suggested ABC.

Patient was operated with parietal approach. The cystic tumor was well defined with no scalp adhesion, it was highly vascular mass and excessive bleeding occurred during operation. In multiple areas, the cyst wall was tightly adherent to the parietal dura. The calvarias adjacent to the tumor had abnormal texture and all bony attachment to the cyst was drilled down as necessary.

Total removal of the cyst was achieved. Patient tolerated the operation well and without complication. Simultaneous reconstruction using artificial bone graft was performed. Figure 2: Post-operative CT-Scan: good osteo-integration of the graft with no sign of recurrence.

ABC was first described by Jaffe and Lishtenstein in 1942 [2]. It is a rare benign vascular lesion of the bone but locally aggressive. It most involves the long tubular bones and spine [3] and cranial location is about 3 to 6 %. It could attend a giant mass [4].

It may occur as primary lesion or a secondary to other lesion: osteoblastoma [5], ossifying fibroma [6], chondroblastoma [7].

Only 14 cases of calverious FD with secondary ABC have been reported [8].

ABC may be primary or secondary. The exact cause of ABC is uncertain. The development of focal dynamic changes with secondary venous hypertension may cause a slow expansion of the cortex. Many others propose the hypothesis of the existence of a basic underlying arteriovenous anomaly that results in dilated vascular spaces. Other authors proposed that genetic or chromosomal changes are involved in ABCs [3-10].

Plain radiographs of aneurysmal bone cysts in the skull typically reveal osseous expansion with involvement of the inner and outer tables and intracranial extension. On CT scans, ABC appears as welldemarcated, multi-loculated, osteolytic lesions. Fluid–fluid levels are sometimes apparent when the patient is motionless for a few minutes. MRI easily depicts additional information about the internal septa; it completely delineates the margin of the lesion as a rim of low signal intensity, and demonstrates fluid–fluid levels. MRI helps in further identifying hemorrhage [11].

Complete surgical excision is the treatment of choice and may a satisfying outcome of the almost all surgeon. It can be facilitated by preoperative embolization [5].

Other therapeutic modalities are medical management, such as interferon É‘-2a and radiation therapy, or calcitonin injection in case of unresectable tumor [12-14].

FD must be follow up by clinical and radiologic explorations to detect compressive symptoms or secondary lesion such as AC. Rapid enlargement of FD lesions is suggestive of cystic degeneration.