Copyright: © 2016 Liu H, et al. This is an open-access article distributed under the terms of the Creative Commons Attribution License, which permits unrestricted use, distribution, and reproduction in any medium, provided the original author and source are credited.

Five new phenolic glycosides, liparisglycoside K-O (1-5) and one known compound, 4-allyl-2,6-dimethoxyphenol glucoside (6) were isolated from the whole plant of Liparis odorata. Compound 6 was isolated and identified from this genus for the first time. The structures of all compounds were elucidated through extensive spectroscopic methods including UV, IR, MS, 1D- and 2D-NMR. All compounds from Liparis odorata were evaluated for their ability to inhibit LPS-induced NO production on the BV2 microglial cell line in vitro, as well as their inhibitory effects on PTP1B and α-glucosidase enzyme assays.

Liparisodorata (Willd.)Lindl., belonging to the Orchid family [1], is an herbaceous plant widely distributed in southern China, and usually used to inhibit inflammation and reduce lipid in Jiangxi province folk medicine in China. Throughour continuous interest in the chemical and biologically active constituents of this plant [2-4], five new phenolic glycosides (Figure 1) were isolated and their structures elucidated through extensive spectroscopic analyses, as well as literature comparisons. In addition, one known compound was isolated and identified as 4-allyl-2,6-dimethoxyphenol glucoside [5]. To the best of our knowledge, obesity therapy using phenolic glycoside derivatives has not been studied yet, and we here reportthe anti-diabetes effects against protein tyrosine phosphatase 1B (PTP1B) and α-glucosidase enzymes forall the isolated compounds. PTP1B plays a critical role as a key negative regulator of the insulin and leptin signaling pathways, thereby regulating glucose homeostasis and body weight, respectively [6], while α-glucosidase inhibition is critical for the early treatment of diabetes mellitus [7]. Therefore, effective inhibition of both enzymesis a potential therapy for both type 2 diabetes mellitus and obesity. 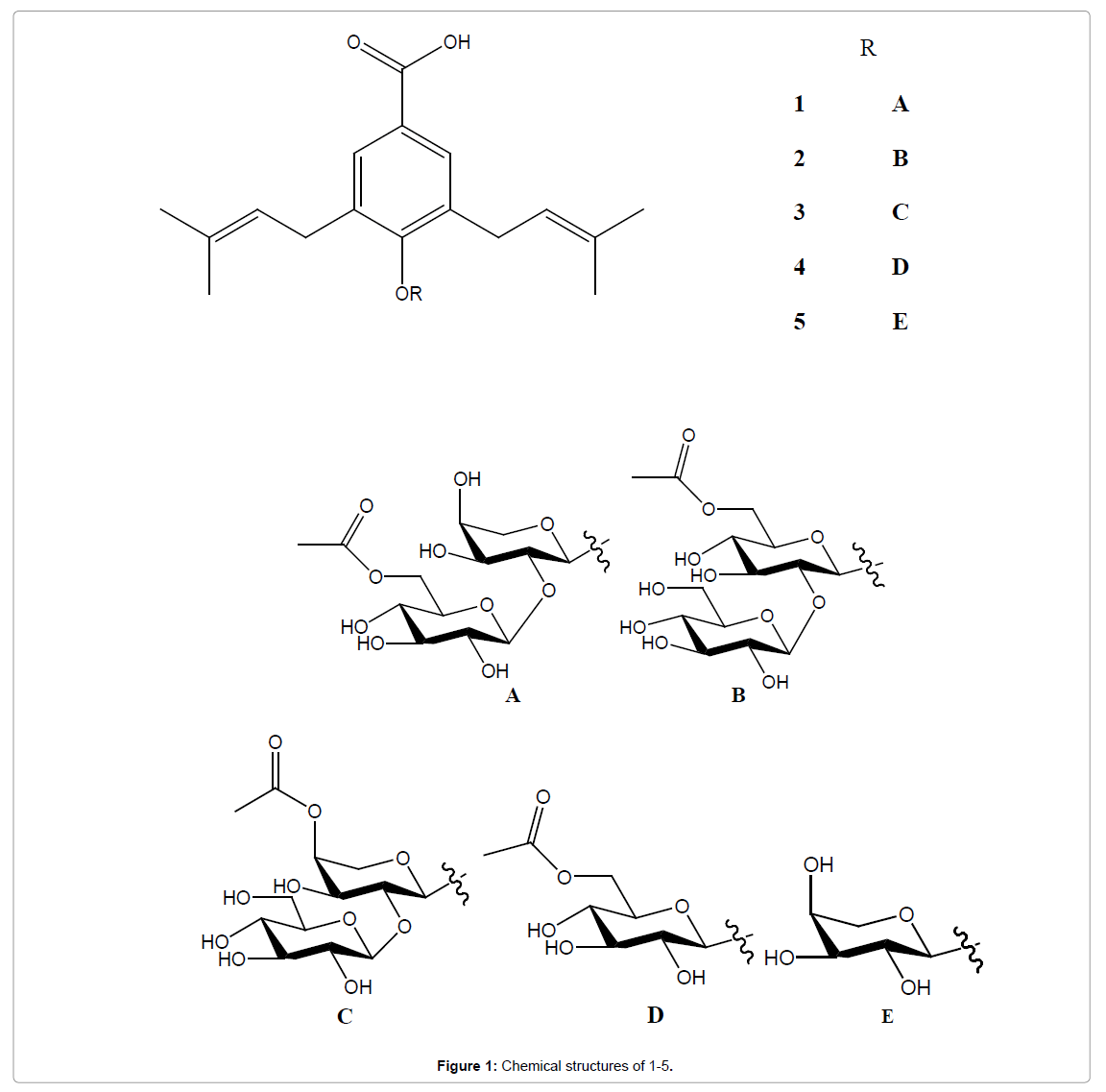 L.odoratawas collected in the Jiangxi province of China in August 2012. The plant materials were identified by professor Lai Xuewen, Jiangxi University of Traditional Chinese Medicine in China, where a voucher specimen (No.002017) was deposited.

Anti-diabetes and anti-inflammatory assays: As previous studies showed that phenolic glycosides compounds from Liparisodoratapossessed anti-inflammatory activities [3], so, these new phenolic glycosides in this paper were also evaluated activities to inhibit inflammation. Also because of new compounds, widespread screening on activities were looked forward to, thus evaluation of these compounds for their protein tyrosine phosphatase 1B inhibition and α-glucosidase inhibition activities were untaken in our experiments, seeking new potential drugs for the clinic.

Protein tyrosine phosphatase 1B inhibition: The assay was carried out as previouslydescribed [8]. Briefly, all samples were dissolved in 100% DMSO. p-Nitrophenyl phosphate(p-NPP, 2 mM) and PTP1B (0.05-0.1 μg) were added to a buffer containing 50mM citrate (pH 6.0), 1mMEDTA, 0.1MNaCl, and 1mM dithiothreitol, with or without test sample. Following incubation at 37°C for 30min, the reaction was terminated by adding 10M NaOH (10 μL). The amount of released produced p-nitrophenol (p-NP) was estimated by measuring the absorbance at 405 nm. The measured values were corrected for non-enzymatic hydrolysis of 2mMp-NP by measuring the increase in absorbance at 405 nm in the absence of the PTP1B enzyme.

α-Glucosidase inhibition:α-Glucosidase inhibitory activity was determined according to a previously reported method [9]. Briefly, for each compound, the extract was premixed with p-nitrophenylglucopyranoside (p-NPG) (2 mM) as a substrate in 2 mL 0.1 M phosphate buffer (pH=6.86). Then, α-glucosidase (0.05 units) was added to the mixture to start the reaction. The reaction was incubated at 37±0.5â„ƒ for 15 min and stopped with 4 mL of 0.1 M Na2CO3. The α-glucosidase inhibitory activity was determined by measuring the absorbance at 400 nm as an indication forp-NP produced from p-NPG.

3Anti-inflammatory activity: The murine microglial BV2 cell lines were purchased from the Cell Culture Centre at the Institute of Basic Medical Sciences, Chinese Academy of Medical Sciences. LPS (from Escherichia coli 055: B5), were obtained from Sigma-Aldrich. The inhibitory activity of extracted compounds on LPS-stimulated NO production in BV2 cells was measured as described previously [3].

Liparisodoratais was widely used as a folk medicine to inhibit inflammation and reduce lipid inChina, through our continuous interests in the bioactive constituents of this plant [2-4], on the basis of pharmacological action tracking method, systematically studies on the chemical compositions andbioactivities of Liparisodoratawere carried out, looking for new biological compounds.

Figure 2: HMBC and key correlations of compounds 1 and 2.

Compound 3 was isolated as colorless oil. Its molecular formula was established as C30H42O13 by analysis of the HR-ESI-MS spectrum at m/z 633.2522 [M+Na]+ (calcd. for C30H42O13,633.2518). The 1H (Table 1) and 13C NMR data (Table 2) of 3 were comparable to those of 1 and 2, showing that the main differences were in the sugar part and the location of the acetoxy (OAc) group. Connectivity of the OAc group was established from the HMBC spectrum, which showed a correlation between Ara H-4' (δH 4.16) and the carboxyl carbon of the acetyl unit (δC 170.0).Hence, the OAc group was located at C-4' of the Ara. Moreover, the sugar residues were identified as α-L-arabinose and β-D-glucose by GC of the hydrolyzed product. So the structure of 3 was established as 4-O-[4'-O-acetyl-α-L-arabinopyranosyl-(1→2)-β-D-glucopyranosyl]-3,5-bis(3-methyl-2-butenyl) benzoic acid, which was namedliparisglycoside M(3).

Compound 5, obtained as a white amorphous power, was assigned the molecular formula of C22H30O7 via HR-ESI-MS atm/z 429.1885 [M+Na]+ (calcd. for C22H30O7,429.1884). Analysis of the 1H (Table 1) and 13C-NMR spectra (Table 2) indicated that compound 5 also possessed a structure similar to compound 1 and that the major differences between them were the absence of the acetyl group and glucose. The sugar residue was identified as α-L-arabinose by GC of the hydrolyzed product. Therefore, the structure of compound 5 was determined to be 4-O-(a-L-arabinopyranosyl)-3,5-bis(3-methyl-2-butenyl) benzoic acid, named liparisglycoside O (5).

The biological activity of the above compounds 1-6, isolated from Liparisodorata, was tested by individual evaluationoftheirin vitrohypolipidemic activity against α-glucosidase and PTP1B enzymes. The results are summarized in Table 3. Only compound 3 showed inhibitory activity (9.7% of PTP1B and 6.1% of α-glucosidase), other compounds didn’t have significant effects. As the structure of compound 3 is different from other compounds by the existence of an acetoxy (OAc) group linking to the C-4 of Arabinose, and maybe it was the reason to have such bioactivities. In addition, the compounds were evaluatedin vitrofor their inhibition (%) oflipopolysaccharide (LPS)-stimulated nitric oxide (NO) production in BV2 microglial cells using the Griess reagent.As shown in Table 4, all compounds were found to possess weak inhibitory activity.

Table 4: Inhibitory activities on LPS-induced NO production in BV2 of compounds 1-6.

In summary, five new phenolic glycosides (1-5), along with one known compounds (6) were isolated from L. odorata. We found only compound 3 showed weak inhibitory activityagainst α-glucosidase and PTP1B enzymesand all the compounds possessed anti-inflammatory effects by inhibition the NO production in LPS-activatedBV2 microglial cells. Further studies on the action mechanismof phenolic glycosides compounds of Liparisodorata were taken in our laboratory, it was better to expand the usage of this ancient and effective folk medicine.

The authors confirm that this article content has no conflictof interest.