Revathi B1* and Prashanth K2

Copyright: © 2015 Revathi B, et al. This is an open-access article distributed under the terms of the Creative Commons Attribution License, which permits unrestricted use, distribution, and reproduction in any medium, provided the original author and source are credited.

Estrogensare the primary female sex organs which can be either natural steroidal or synthetic non-steroidal. This group of compounds has their importance in menstrual and estrous reproductive cycles. They are basically used as oral contraceptives. Also as estrogen replacement therapy and in hormone replacement therapy for postmenopausal women and trans women respectively. Contraception is the method of preventing normal process of ovulation, fertilization and ovum implantation nothing but pregnancy. Oestrogens are synthesized by the ovary and placenta and in small amounts by the testis and adrenal cortex. As for other steroids, the starting substance for oestrogen synthesis is cholesterol. As such many anti-fertility agents have been developed as it is the need of hour in today’s living scenario.

Drugs which used for preventing fertilization are called as antifertility agents. These are also known as contraceptive agents. Contraception is the method of preventing normal process of ovulation, fertilization and ovum implantation nothing but pregnancy [1-3]. Estrogens are the primary female sex organs which can be either natural steroidal or synthetic non-steroidal. This group of compounds has their importance in menstrual and estrous reproductive cycles. They are basically used as oral contraceptives. Also as estrogen replacement therapy and in hormone replacement therapy for post-menopausal women and trans women respectively [4,5]. Estrogens are synthesized in vertebrates as well as some insects. This presence of the female sex hormones n insects and vertebrates suggests that they have an ancient evolutionary history. Under certain circumstances, they are used in males for treatment of prostate cancer. Estrogens are also known to promote wound healing [6].

These are classified into two types.

These are available as oral, injectable, and transdermal patches. Oral contraceptive agents include both steroidal and non-steroidal agents and also available in chemical, mechanical and surgical dosage forms.

Oestrogens are synthesized by the ovary and placenta and in small amounts by the testis and adrenal cortex. As for other steroids, the starting substance for oestrogen synthesis is cholesterol. The immediate precursors to the oestrogens are androgenic substancesandrostenedione or testosterone. There are three main endogenous oestrogens in humans: Oestradiol, Oestrone and Oestriol (Figure 1). Oestradiol is the most potent and is the principal oestrogen secreted by the ovary [1,2,5,7].

Based on the sources Oestrogens are classified as [8-11], 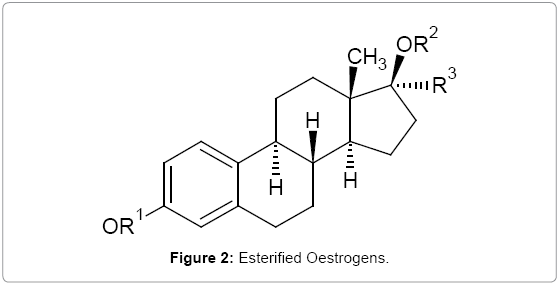 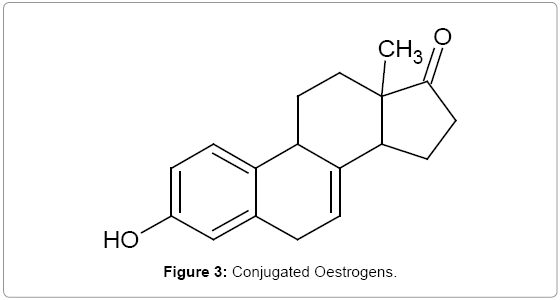 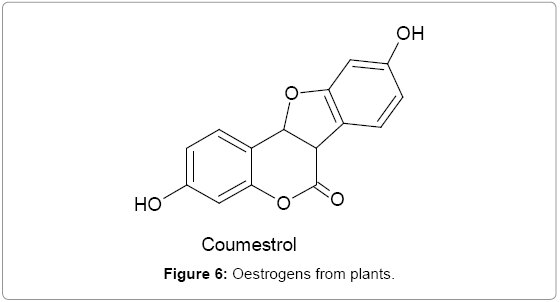 Inendocrine tissues, cholesterol is the steroid that is stored and converted to estrogen, progesterone, or androgen when the tissue is stimulated by a gonadotropic hormone. The major pathways for the biosynthesis of sex steroid hormones are summarized below. In the ovary, FSH acts on the preovulatory follicle to stimulate the biosynthesis of estrogens. The thecal cells of the preovulatory follicle convert cholesterol into androgens, whereas the granulosa cells convert androgens to estrogens (Figure 7). 1. Cleavage of the side chain of cholesterol produces pregnenolone (step a), which can then be transformed into progesterone or, via several biosynthetic steps, to the aromatic A ring system found in estrogens.

2. Pregnenoloneis converted by 17α-hydroxylase to 17α-hydroxypregnenolone (step b), which then proceeds on to the intermediate dehydroepiandrosterone (DHEA) via 17,20-lyase reaction (step e).

4. The final step in the biosynthesis is the conversion of the C19 androgensto the C18 estrogens via the loss of the C19 angular methyl group and aromatization of ring A to form 17β-estradiol or estrone (step g) catalyzed by aromatase.

5. The interconversion of 17β-estradiol and estrone is catalyzed by estradiol dehydrogenase (step h), a member of the 17β-hydroxysteroid dehydrogenase family.

Oestrogen binds to intracellular receptors. There are two types of oestrogen receptor, termed as ERα and ERβ. When oestradiol binds to the estrogen receptor, a conformational change of the estradiol receptor complex occurs and results in interactions of the estradiolreceptor complex with particular HRE regions of the cellular DNA, referred to as estrogen responsive elements (EREs) [1,12]. Binding of the complex to ERE elements results in initiation of transcription of the DNA sequence to produce mRNA. Finally, the elevated levels of mRNA lead to an increase in protein synthesis in the endoplasmic reticulum. Estrogens produce their effects upon the mammalian uterus by increasing synthesis of RNA in the target cells [13-15].

Oestrogens act on many tissues such as those of the reproductive tract, breast, and CNS. The primary physiological action of oestrogens is to stimulate the development of secondary sex tissues. They have several metabolic actions including mineralocorticoid (retention of salt and water) and mild anabolic actions [16]. They increase plasma concentrations of high density lipoproteins, a potentially beneficial effect that may contribute to the relatively low risk of atheromatous disease in premenopausal women compared with men of same age. Oestrogens increase the coagulability of blood and contraceptive pills containing a high oestrogen content increase the risk of thromboembolism. This effect is dosing related [17].

1. These Hormones appear to prevent coronary atherosclerosis in women before menopause because of an alteration in the composition of circulating lipids [2].

2. Because of feminizing effects, estrogen therapy in males is limited.

3. One of the primary therapeutic uses is in the treatment of menopausal symptoms such as hot flashes, chilly sensations, dizziness, fatigue, irritability, and sweating.

4. For many women, menopause does not cause much discomfort; in some, however, both physical and mental discomfort may occur and can usually be prevented through estrogen therapy.

5. One of the most widespread uses of estrogens is in birth control. These hormones are used in postmenopausal osteoporosis because it is thought that an estrogen deficiency in postmenopausal women can lead to this serious disorder of the bone.

Another major use of estrogens is in HRT for postmenopausal women. For this use, a progestin is often included to oppose the effects of estrogens on endometrial tissue [9,10].

7.Treatment of Estrogen Deficiency From Ovarian Failureor After Oophorectomy.

1. Nausea appears to be the main side effect; other adverse effects include vomiting, anorexia, and diarrhea.

2. Excessive doses of estrogens inhibit the development of bones in young patients by accelerating epiphyseal closure [8,19].

3. When estrogens are given in large doses over long periods of time, they can inhibit ovulation because of their feedback inhibition of the release of FGH from the adenohypophusis resulting in inhibition of ovulation. Administration of these drugs may promote sodium chloride retention; the result is retention of water and subsequent edema.

4. When administered to males, oestrogens result in feminization.

5. Carcinoma of the vagina was more common in young women whose mothers were given stilbestrol in early pregnancy in a misguided attempt to prevent miscarriage.

The naturally occurring estrogens are C18 steroids and contain an aromatic A ring with a hydroxyl group at the 3 position. Substitution of the estrogen steroid nucleus can significantly modify estrogenic activity [1,10,20].

Substitution at ring A:

1. The aromatic A ring and the C3 hydroxyl group are structural features essential for estrogenic activity (Figure 8).

3. Only small groups can be accommodated at the 2 and 4 positions.

Substitution at ring B:

1. Addition of hydroxyl groups at positions 6,7 and 11 reduces activity.

2. Presence of unsaturation at positions 6th and 7th increase the potency of drug similarly additional double bond between 8th and 9th positions still increases the activity.

1. Substituents at the 11β position are tolerated; for example,11β- methoxy or 11β-ethyl has significantly greater affinity for the ER as compared to estradiol

2. Substitution of hydroxyl group at 11th position decreases the activity.

2) Removal of the oxygen function from position 3 or 17, or epimerization of the 17β-hydroxyl group of estradiol to the α-configuration, results in an estrogenic analogue that is less active. 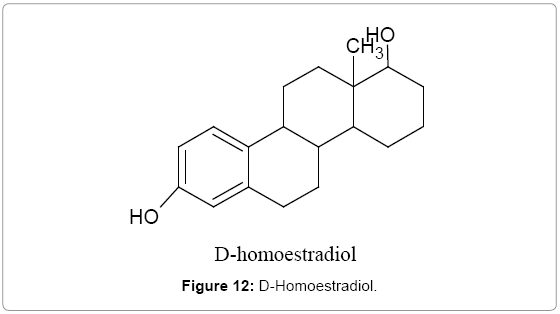 5) The 17β-hydroxyl, the distance between the C3 and C17 hydroxyl groups, and the presence of planar hydrophobic molecules also are important structural contributors and help to optimize estrogenic activity. Ideally, the distance between the oxygen atoms of the C3 and C17 hydroxyl groups should range from 10.3 to 12.1 A (Figure 13), Eg: Diethylstilbestrol.