Copyright: ©2016 Obajuluwa AF, et al. This is an open-access article distributed under the terms of the Creative Commons Attribution License, which permits unrestricted use, distribution, and reproduction in any medium, provided the original author and source are credited.

As Staphylococcus aureus remain the predominant microbial flora of the human respiratory tract and skin; it also account for the most human integumental infections and life-threatening systemic diseases especially in orthopaedic surgical site infections (SSIs). This study evaluates the antibiotics susceptibility pattern of Staphylococcus aureus isolates from orthopaedic patients to various antimicrobial agents used in the treatment of surgical sites infection in Ahmadu Bello University Teaching Hospital (ABUTH), Zaria, Nigeria. A total of 100 clinical swab samples of surgical sites were collected from orthopaedic patients in ABUTH, Zaria, Nigeria out of which 39 were identified as Staphylococcus aureus using API STAPH identification kit. Disc agar diffusion method was used for the antibiotics susceptibility test while nitrocefin microplate assay was used to test for beta lactamase production. Our findings showed that 97.4% of the isolates were susceptible to both vancomycin and gentamicin followed by ciprofloxacin (94.9%) and pefloxacin (84.6%). The isolates were highly resistant to ampicilin (94.9%), ceftriaxone (79.5%), cefoxitin (64.1%) and amoxicillin-clavulanic acid (59%) which is beta-lactam antibiotics. Further evaluation showed that 64% of the isolates produced beta-lactamase, while 36% do not. We conclude that the Staphylococcus aureus isolates from orthopaedic patients in ABUTH, Zaria were highly resistant to beta lactam antibiotics used in this study.

Staphylococcus aureus is commonly carried on the skin or in the nose of healthy individuals. It is an important pathogen in human infections causing illness ranging from minor skin infections and abscesses to life-threatening diseases such as pneumonia, meningitis, endocarditis, toxic shock syndrome and septicaemia which may be rapidly fatal [1]. Bacterial resistance to antibiotics has been recognized since the first drugs were introduced for clinical use. Penicillin was first introduced in 1941, when less than 1% of Staphylococcus aureus strains were resistant to its action. By 1947, 38% of hospital strains had acquired resistance and currently over 90% of Staphylococcus aureus isolates are resistant to penicillin. Increasing resistance to antibiotics is a consequence of selective pressure [2]. In orthopaedics, S. aureus has been implicated in surgical site infection, painful infection of joint fluid known as septic or infective arthritis, post-operative infection, implant devices, infection following trauma, chronic osteomyelitis subsequent to an open fracture, meningitis following skull fracture. This study was aimed at determining the antibiotic susceptibility pattern of the S. aureus isolates from orthopaedic patients in a tertiary hospital in North-western Nigeria.

One hundred clinical samples were collected aseptically from the wound, skin and bed of orthopaedic patients in Ahmadu Bello University Teaching Hospital Zaria, Nigeria over a period of 5 months. Ethical approval and patients’ consent were obtained.

API STAPH identification kit (bioMerieux, Inc, Durham, USA) was used to identify the S. aureus isolates. The procedures were carried out according to the manufacturer’s instructions.

Enzyme extracts of the S. aureus isolates were prepared as described by Caddick [4] with modification. Microplate Nitrocefin assay was carried out as follows: 1 mg lyophilized Nitrocefin powder (Oxoid, UK) was reconstituted in 1.9 ml of 0.1 M phosphate buffer, pH 7 supplied by the manufacturer. The reconstituted nitrocefin was further diluted 1 in 10 with PBS to give 50 μg/ml solution. The disrupted cell preparations were used immediately by dispensing 50 μL of preparation into separate wells of a 96 well plate. 50 μL of diluted nitrocefin solution was added into each of the wells and incubated at 37°C for 10 minutes. In the presence of β-lactamase, the chromogenic nitrocefin substrate changes colour from yellow to pink/red.

A total number of 100 samples were collected and the distribution of S. aureus from the sample sites is presented in Table 1.

Beta lactamase test and their resistant pattern to antibiotic

The result of the beta lactamase test is shown in Figure 1. 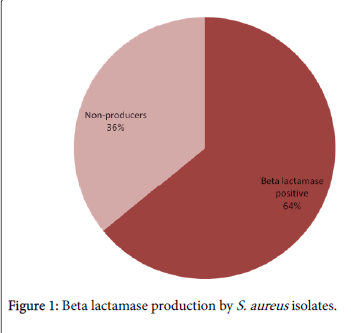 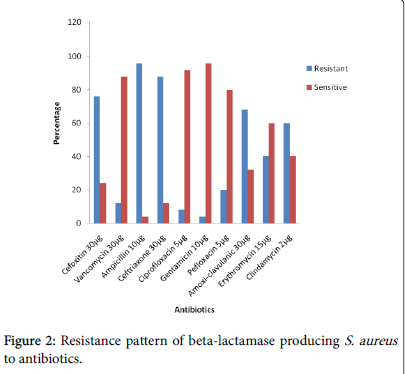 The result of the MAR index of the S. aureus showed that 32(82.1%) of the resistant S. aureus isolates had MAR index greater than 0.2, details are shown in Table 3.

S. aureus is known to be one of the causes of nosocomial infection [8-10], the isolation of S. aureus from the patients’ beddings in this study is in support of this. The majority of nosocomial infection is caused by the patient’s own endogenous microbial flora present upon admission to the hospital [11]. The 97.4% susceptibility to gentamicin observed in this study is consistent with previous reports from Africa [12,13] Gentamicin is an example of aminoglycoside whose mode of action is to inhibit protein synthesis by inhibiting 30 S ribosome of the organism [14]. High susceptibity to vancomycin was observed in this study. Vancomycin is a glycopeptide which inhibits peptidoglycan synthesis in the bacteria, it is a known drug of choice in the treatment of methicillin resistant S. aureus [15].

Ciprofloxacin is a quilonone which acts by inhibition of enzymes involved in DNA replication and function, the 94.9% susceptibility of S. aureus observed in this study is in conformity with previous reports [16-18]. The little level of resistance to ciprofloxacin observed in this study might be connected with the increasing rate of availability of different cheap brands of generic ciprofloxacin in the market which might have probably led to the misuse of it.

The high percentage of the S. aureus having MAR index greater than 0.2 (Table 3) suggests that the isolates originated from a high risk source of contamination where antibiotics are often used [6,7]. It also indicates that a large proportion of the bacterial isolates have been exposed to several antibiotics. The high incidence of multi drug resistance observed in this study (Table 4) could be attributed to a combination of microbial characteristics such as selective pressure on antimicrobial usage, societal and technological changes that enhance the transmission of drug resistant organisms [23]. Other reasons could be due to increase in irrational consumption rate of antibiotics, transmission of resistant isolates between people, self-medication, non-compliance with medication and sales of substandard drug.