Copyright: © 2015 Puri R, et al. This is an open-access article distributed under the terms of the Creative Commons Attribution License, which permits unrestricted use, distribution, and reproduction in any medium, provided the original author and source are credited.

The wired computer network provide secure and faster means of connectivity but the need of mobility i.e. anywhere, anytime and anyone access is tilting the network users towards wireless technology. This Paper Analyse the modelling and implementation of Wireless Local Area Network (WLAN) using different factors based on OPNET Modeller. Here OPNET Modeller is used to develop a new model that fits for Academic Site Location. Our model was analysed to measure the performance of factors of the wireless local area network based on such academic site location. Our model was tested adjacent to four applications (FTP, HTTP, Video Conferencing and Database) in four sites and found that other factors also were extremely influenced by the number of users per application with and without load balancer. OPNET Modeller simulation demonstrated the effect of load balancer on wireless and wire-line network for four different types of applications.

Wireless local area networks (WLANs) based on the IEEE 802.11 standards are one of the fastest growing wireless access technologies in the world today. These are common place on many academic site locations [1-5]. It have all capabilities of Wired LANs along with additional feature that user terminal do not need to be physically connected to Wired Infrastructure. WLANs bring the user closer to the promise “anything, anytime, anywhere” of future technology.

Wireless resources are inclusive of broadband Internet connection, network printers, data files, and even streaming audio and video. Such resource sharing has become more prevalent as computer users have changed their habits from using single, stand-alone computers to working on networks with multiple computers, each with potentially different operating systems and varying peripheral hardware [2]. Most general technologies are applying for the series of IEEE 802.11 standards. IEEE 802.11b is the well recognized technology to be known using frequency 2.5 GHz range. For this paper we have focused on IEEE 802.11b [4,6-8].

Our Paper focuses to study academic site location scenario. We use the OPNET Modeler [6,9-11] simulation environment, with its detailed models of IEEE 802.11b, TCP/IP, FTP, HTTP, Video Conferencing and Database. We have chosen simulative tool- OPNET Modeler for our research because of the several benefits it offers over the other contemporary tools available. It provides the set of complete tools and a complete user interface for topology design and development. Another advantage of using it is that it is being extensively used and there is wide confidence in the validity of the results it produces. We parameterized the simulation model based on academic site measurements, and validate the model adjacent to WLAN performance metrics using simple FTP, HTTP, Video Conferencing and Database workload models. It was used to investigate the various performance metrics in wireless and wire-line LAN for a balanced and unbalanced network which has been presented.

After briefing the introduction in section I, Section II introduces our model and the scenarios we tested, section III analyses the results and the conclusion is drawn in section IV.

The IEEE 802.11 WLAN architecture is built around a Basic Service Set (BSS). The IEEE 802.11 standard defines a set of wireless LAN protocols that deliver services similar to those found in wired Ethernet LAN environments. A BSS is a set of stations that communicate with one another. When all the stations in the BSS can communicate directly with each other (without a connection to a wired network), the BSS is known as an ad hoc WLAN. When a BSS includes a wireless access point (AP) connected to a wired network, the BSS is called an infrastructure network. A simulation model was developed using OPNET Modeller [6,11]. OPNET 802.11b module was used as a standard with default data rate up to 11 Mb/s. IEEE 802.11b Direct Sequence was used as a default Physical Characteristic. In this section we will introduce the two scenarios we tested:

Here four WLAN Sites (Figure 2) each with 40 Users through 1 access points using DATABASE (10 users), and HTTP (10 users) and FTP (10 Users) and Video Conferencing (10 Users) connected with outside wire-line network without load balance in (Figure 1 and Table 1). 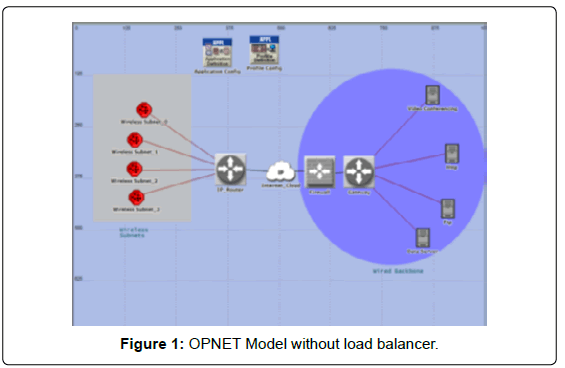 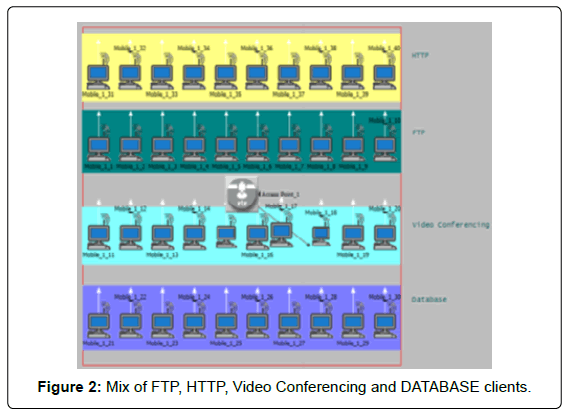 Here four WLAN Sites (Figure 2) each with 40 Users through 1 access points using DATABASE (10 users), and HTTP (10 users) and FTP (10 Users) and Video Conferencing (10 Users) connected with outside wire-line network with load balance in (Figure 3 and Table 1). 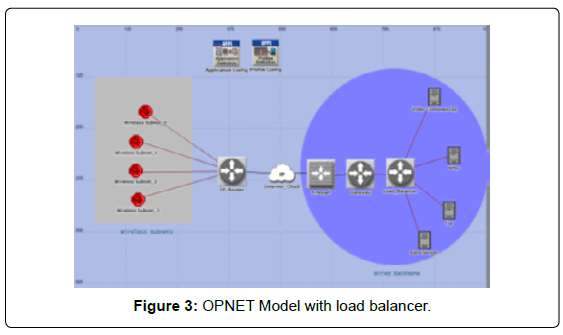 Scenario 2 is the duplicate of scenario 1 in terms of number of users and types of application each user accesses. In our model we installed 4 access points (sites) in a Academic site where mix of DATABASE, HTTP, Video Conferencing and FTP clients are there. Simulations have been conceded out for our model to determine performance of the Factors. Tables 1 and 2 indicate the application description and the wireless traffic generation Factors.

Result Analysis along with Web Reports 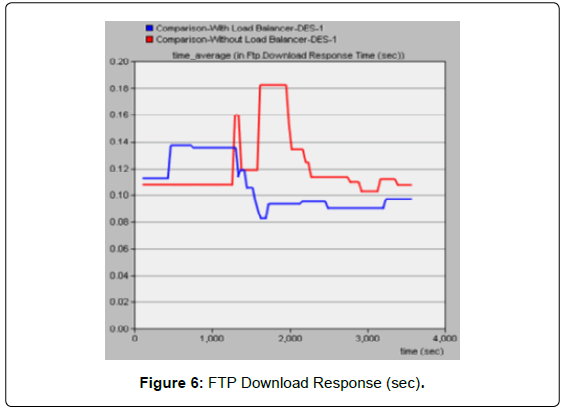 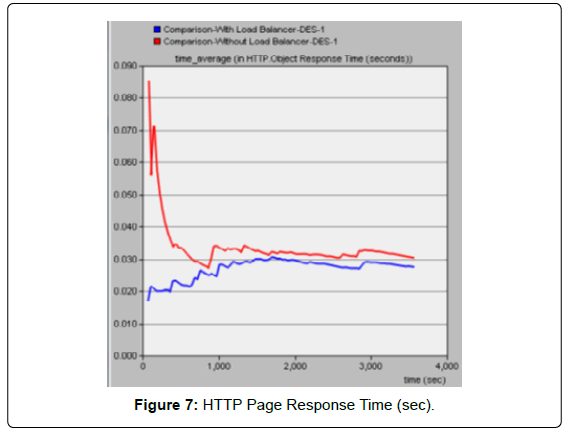 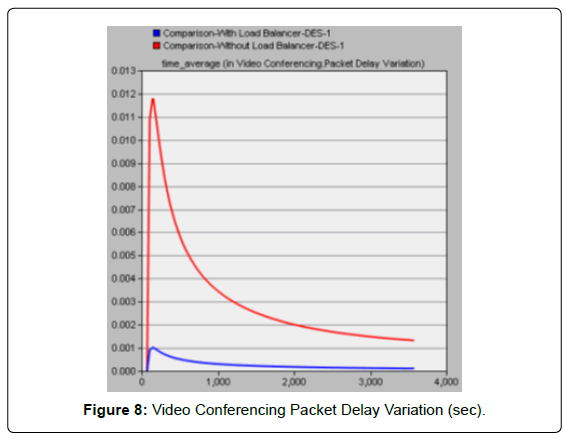 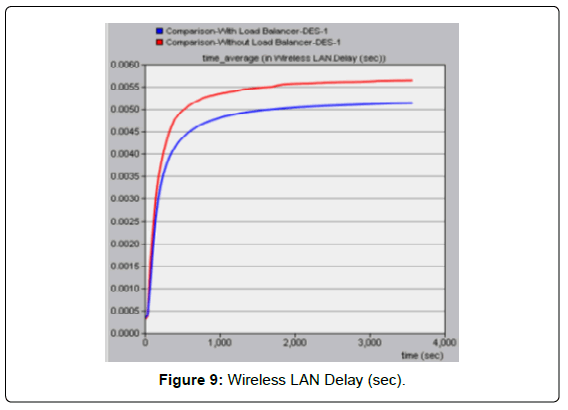 For Video Conferencing, it is observed that Packet Delay Variation for scenario 1 (Figure 1) as well as for scenario 2 (Figure 3) averagely time consumed is 0.0001 seconds.

For WLAN, it is observed that for scenario 1 (Figure 1) as well as for scenario 2 (Figure 3) averagely time consumed is 0.005 seconds.

In this Paper we have laid more stress on the time factor as all factors or the parameters are as per the time. We can observe by seeing at the Tables 3 and 4 about the different values of Parameters i.e. averagely, maximises as well as minimum values of different parameters.

So, it is conclusive that using Load Balancer reduces the time consumption to access different applications as compare to without Load Balancer. Also there is equal Consumption of CPU in both the cases.