Copyright: © 2015 Taghipour M, et al. This is an open-access article distributed under the terms of the Creative Commons Attribution License, which permits unrestricted use, distribution, and reproduction in any medium, provided the original author and source are credited.

In this paper, a three-layer artificial neural network (ANN) was investigated to predict the inhibitory concentration (IC) values assessed via MTT cell viability assay on the four types of human lung epithelial cancer cell lines. In order to achieve this purpose, a multilayer perceptron (MLP) neural network trained with back-propagation algorithm was employed for developing the ANN model. To develop the model, the input parameters were concentrations and types of cell lines and the outputs were IC10, IC20, IC30, IC40, IC50, IC60, IC70 and IC80 values in the A549, H157, H460 and H1975 cell lines. The proposed ANN model has achieved good agreement with the experimental data and has a small error between the estimated and experimental values. The obtained results show that the proposed ANN model is a useful, reliable, fast and cheap tool to predict the IC values assessed via MTT cell viability assays.

Many biological assays require the measurement of surviving and/or proliferating mammalian cells. This can be achieved by several methods, e.g., counting cells that include/exclude a dye, measuring released 51Cr-labeled protein after cell lysis, and measuring incorporation of radioactive nucleotides ([3H]thymidineor [125I] iodo-deoxyuridine) during cell proliferation [1]. In 1983, a new and rapid quantitative colorimetric assay, based on the tetrazolium salt thiazolyl blue, for mammalian cell survival and cell proliferation was proposed by Mosmann [1]. At present, colorimetric assay using the tetrazolium salt thiazolyl blue, also termed MTT, after methylthiazolyl- tetrazolium [2] is widely used for assessment of cytotoxicity, cell viability and proliferation studies in cell biology [2-5]. This test is based on the cellular uptake of MTT and its subsequent reduction in the mitochondria of living cells to MTT formazan (a dark, water insoluble and blue product) [6]. The method has been extended and improved by several authors [7-10].

Doxorubicin (DOX, trade name Adriamycin) is an antitumor drug commonly used as single and in combination with other chemotherapeutic agents, for treatment of wide range of human malignancies [11,12].

Flavonoids have been extensively studied for their multifaceted ability to perform as chemoprevention agents and as chemotherapeutics against a wide array of cancers [13,14]. Chrysin is aflavone found in the blue passion flower (Passifloracaerulea) and Honeycomb [13,15].

Artificial neural network (ANN) is a highly simplified model of the biological network structure[16,17]. The basic advantage of ANN is that it does not need any mathematical model; an ANN learns from examples and recognizes patterns in a series of input and output data without any prior assumptions about their nature and interrelations [17]. Moreover, ANN is a good alternative to conventional empirical modeling based on polynomial and linear regressions [18]. Thus, ANN is a typical non-mechanistic model for modeling complex information and is known to have two intrinsic advantages. The first is its flexible capacity in apprehending the data used for training. Being intrinsically nonlinear, a trained ANN can grasp certain subtle patterns that tend to be overlooked by common statistical methods. The second advantage is its high predictive accuracy, i.e., the predictive capability for ‘‘new’’ data (untrained data) [19-23]. The high predictive accuracy is an assured outcome of the ability of ANN to apprehend the data [21,24,25]. On recognizing and application these advantages of ANN in MTT assays, in the current study, we report the design, training and validation of a feed-forward ANN to predict the inhibitory concentration (IC) data such that the designed ANN would (A) make sufficient use of the existing ICs data table of an available set of experimental data about chrysin enhances doxorubicin-induced cytotoxicity in human lung epithelial cancer cell lines by Brechbuhl et al. [13], (B) predict the ICs evaluated with a MTT assay in human lung epithelial cancer cell lines treated with chrysin before exposure to DOX. The predicted ICs are expected to fill the data gap for untested IC values with less waste of time and resources.

Materials, cell culture and MTT assay conditions: For training the ANN model, we used experimental data evaluated by Brechbuhl [13]. The cytotoxic effects of combination drug therapy with chrysin and DOX were determined against cell lines using MTT [1]. The lung nonsmall cell epithelial cancer cell lines A549, H157, H460 and H1975 were cultured at 37°C with 5% CO2 and grown in media and supplements purchased from Mediatech (Manassas, VA). All cells were grown in RPMI media containing L-glutamine and supplemented with 10% FBS (Gemini Bio-Products, West Sacramento, CA). Cells were maintained in T-150 flasks and split into 96-well plates at least 18 h prior to treatment. H157 and A549 cells were seeded for treatment at 12,000 cells per well. H460 and H1975 cells were seeded for treatment at 10,000 cells per well. At the time of treatment all wells were approximately 70-75% confluent and were treated with fresh media containing the indicated compounds. After exposure, 20 μl/well of MTT solution (5 mg/ml phosphate buffered saline) was added and incubated for 3-4 h. The medium was aspirated and replaced with 150 μl/well DMSO to dissolve the formazan salt. The color intensity of the formazan solution, which reflects the cell growth condition, was measured at 570 nm using a Spectra Max 340PC plate reader (Molecular Devices, Sunnyvale, CA).

Artificial neural networks (ANN) is a good technique used to handle problems of modeling, prediction, control and classification [22]. An ANN is based on the operation of biological neural networks. The fundamental processing element of ANN is an artificial neuron (or simply a neuron). A biological neuron receives inputs from other sources, combines them, performs generally a nonlinear operation on the result, and then outputs the final result [20,23,25]. ANNs have been used in many different applications such as finance, medicine, engineering, geology and physics [19,22,23]. ANN eliminates the limitations of the classical approaches by extracting the desired information using the input data. Applying ANN to a system needs sufficient input and output data instead of a mathematical equation [24-27]. Multilayer perceptron (MLP) networks are the most widely used neural networks that consist of a great number of processing elements called neurons. An MLP network has one input layer, one or more hidden layer and one output layer as shown in Figure 1. 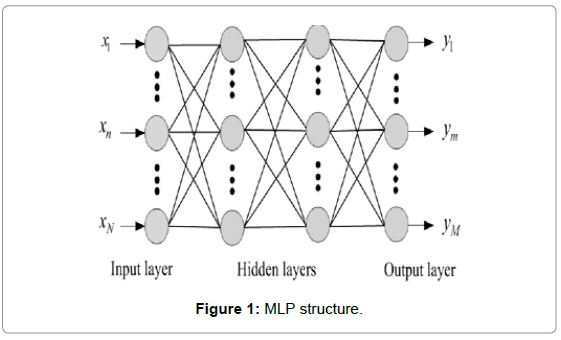 The output from qth neuron of the first hidden layer is given by [20]:

The simplified overview of the proposed MLP model is shown in Figure 2, where the inputs are concentrations and types of cell lines and the outputs are IC10, IC20, IC30, IC40, IC50, IC60, IC70 and IC80 values in the A549, H157, H460 and H1975 cell lines. The data set required for training the network is obtained using the experimental values [13]. For developing the ANN model, the experimental data are divided into two sets. The number of samples for training and testing are 21 (about 75%) and 7(about 25%). 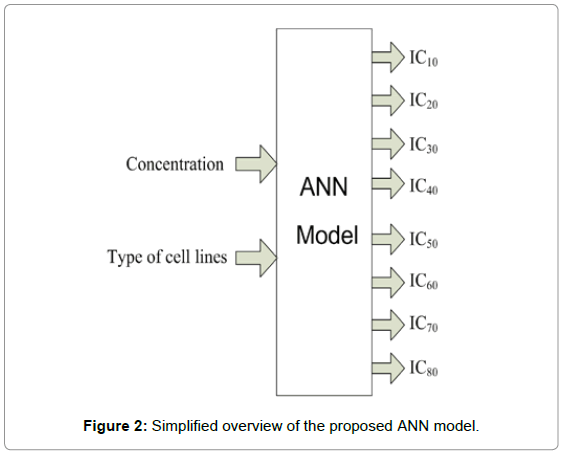 In this study, different ANN structures were tested and optimized to obtain the best ANN configuration. We tested many different structures with one, two, three and four hidden layers with different number of neurons in each layer also we tested Radial basis function (RBF) for prediction output. Table 1 show the comparison between these structures, where the mean relative error percentage (MRE %) is given by:

Where N is the number of data and ‘X(Exp)’ and ‘X (Pred)’ stands for experimental and predicted (ANN) values respectively.

Table 1: Average of MRE% for all outputs for different ANN structures.

Table 2: Comparison of the ANN configurations with different training algorithm, number of hidden layers and number of epochs.

Table 3: Comparison of the ANN configurations with different training algorithms, number of hidden layers and number of epochs.

Table 5: The Comparison between experimental and predicted ANN results for training data.

Table 6: The Comparison between experimental and predicted ANN results for testing data. 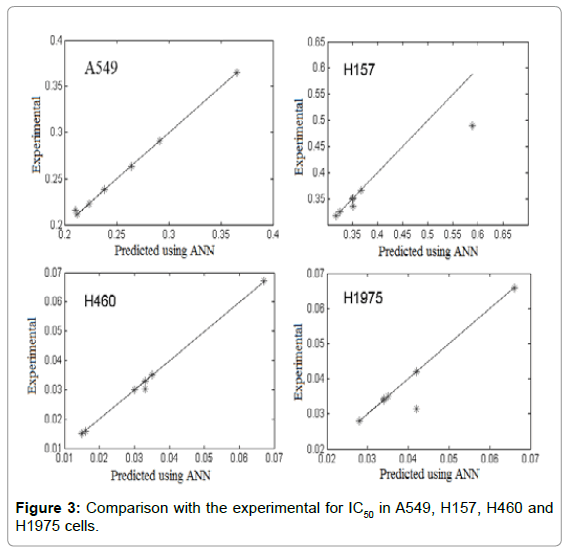 Figure 4 shows the comparison between the experimental and predicted results using ANN for IC50 for all data in A549, H157, H460 and H1975 cell lines. The result shows that there is a good agreement between the experimental and predicted values for output parameters and the ANN model can be used as an accurate model to prediction of inhibitory concentration values accessed via MTT assay on human lung epithelial cancer cell lines co-treated with chrysin and doxorubicin. 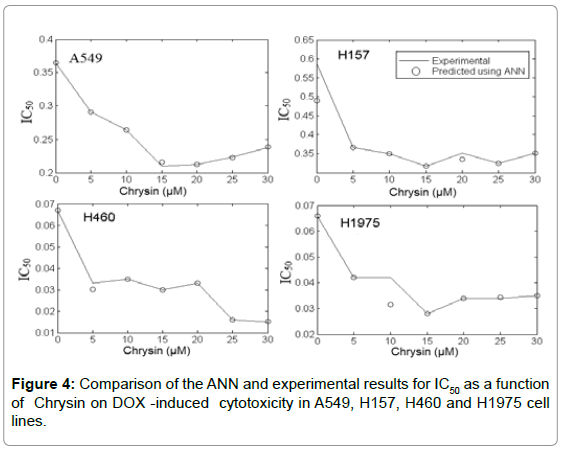 Figure 4: Comparison of the ANN and experimental results for IC50 as a function of Chrysin on DOX -induced cytotoxicity in A549, H157, H460 and H1975 cell lines.

In this paper, the inhibitory concentration (IC) values assessed via MTT cell viability assay on the four types of human lung epithelial cancer cell lines is modeled and predicted by artificial neural network. The proposed ANN model has achieved good agreement with the experimental data with minimum error. According to the obtained results from the ANN model and comparing them with the experimental results, it can be shown that ANN can be used in modeling and output prediction of the IC values assessed via MTT cell viability assays. Seems that the biggest achievement of the Modeling and prediction of the inhibitory concentration values assessed via MTT assay using artificial neural network that was conducted in this paper is create a newer, faster and more efficient method with a very low cost and with high accuracy. The development of this method can be allows finding the optimal drug concentrations on different cell lines using computational intelligence modeling without repeating them in vitro.

This article was extracted from the thesis prepared by Mostafa Taghipour to fulfill the requirements required for earning the master’s degree. The authors thank the Department of Biomedical Engineering, Kermanshah University of medical sciences.