Copyright: © 2015 Yousaf MM, et al. This is an open-access article distributed under the terms of the Creative Commons Attribution License, which permits unrestricted use, distribution, and reproduction in any medium, provided the original author and source are credited.

The removal of heavy and toxic metals such as Fe, Pb, Cd, Cr, Co, etc., from ground and industrial waste water is a matter of great concern in the underdeveloped countries. Of these, iron ions are the focus of attention for researchers because of its wide use in manufacturing industries like galvanized pipe and metal finishing [1]. The presence of iron ions in ground and industrial waste water becomes toxic at high level and then may cause environmental and human health problems [2]. The dissolved iron concentration in ground water can range from less than 1 mg/L up to 20 mg/L. [3]. The ferrous, bivalent and ferric or trivalent are the primary forms of concern in the aquatic environment, although other forms may be organic and inorganic waste water stream.

Different techniques for iron removal are used in water purification processes, i.e. limestone filters [1] ion exchange or cationic exchange resins and the oxidation-precipitation of iron(II) into iron hydroxides, especially the iron oxyhydroxide (FeOOH). The iron hydroxides colloids can be removed by membrane processes based on reverse osmosis, nanofiltration [4] and ultrafiltration. These operations are affected by different parameters such as temperature, pH, and oxygen flow. Moreover, most of these technologies are either extremely expensive or too inefficient in reducing metal ion levels in effluent to concentrations that are required by governmental legislation. Among all methods, the adsorption is a cost-effective technique and simple to operate [5]. Agricultural by-products have been used as adsorbents for the adsorption of hazardous substances from aqueous system.

Mohamed bin Saleh et al. [6] used Okra wastes as a food canning processes by products as potential adsorbent for cadmium(II), iron(II) and zinc(II) removal from various aqueous solutions. Batch studies were performed to evaluate the adsorption. process, and it was found that the okra wastes was found to adsorb 96.4% of cadmium(II) 93.8% of iron(II) and 79.8% zinc(II),. This work proved that okra wastes can be used as an efficient adsorbent material for removal of heavy metals from water and wastewater.

Ghanshyam et al. prepared [7] two series of novel hydro gels consisting of different molar ratios of monomers were prepared for specialty applications as sorbents for some common metal ions. Hydrogels were further functionalized by partial saponification with 0.5M NaOH and were used as adsorbents for Cu2+, Fe2+ and Cr6+ ions. The metal ion sorption was observed in the order: Fe2+>Cu2+>Cr6+.

Zaid et al. studied the adsorption of Fe(III) ions from the aqueous solution using olive cake as an adsorbent. The influences of the initial pH, temperature, contact time and dosage of the adsorbent on adsorption performance have been experimentally verified by a batch method.

Rosliza et al. [8] used untreated sawdust (SD) and treated sawdust (SDC) for removal of the Fe(II) using batch test. The Langmuir and Freundlich isotherms were used to observe sorption phenomena of sawdust in the removal of iron. The results indicate that the sawdust was capable in removing Fe(II) in aqueous solution. The results also showed that Langmuir isotherm was found well fitted into the experimental data as compared to the Freundlich isotherm. It was found that, chemisorption’s and physiosorption were the prime mechanism for the process of adsorption to occur between the sawdust and Fe(II).

Pakistan is a key player in the banana industry. Area under cultivation is 35,000 hectares. 90% is cultivated in Sind province. Sind is a major banana producing area with about 85 to 92 per cent in banana acreage and about 90 per cent of production.

The average area under the fruit in Sind was 32,200 hectares with a production of 126,000 tons. Pakistan is ranked 41 in banana production worldwide. The banana peels waste so produced is not only wasted but may also pose serious disposal problems. On the other hand this waste may be used effectively in water treatment technologies. In the present study we used various banana peel waste products to remove iron from aquatic system.

Banana peel: Banana peels were used as adsorbent in 3 different form i.e raw, grafted and charred for the removal of iron from aqueous system.

Air drying: The fresh banana peels were subjected to air (in shadowing place) for 36-48 hours, and then weighed after drying.

Raw peel (RP): The oven dried peels were considered as raw peel adsorbent and they were directly treated for adsorption study.

Grafted peel (GP): Grafting was carried out by steeping 2 g of dried peel in acrylonitril solution for 15 to 20 min, and after treatment of several chemical solutions the grafted peel was obtained.

Charred peel (CP): These were obtained by keeping the dried peels in muffle furnace for 3 to 4 hrs at 300°C. When the dried peel completely burns giving charred adsorbent.

Standard curve for iron adsorption: Working standards of 100 μg, 200 μg, 300 μg, 400 μg and 500 μg were prepared from stock iron solution. 1 ml of hydoxylamin hydrochloride, 10 ml phenanthroline solution, and 10 ml of sodium acetate solution were added to each standard solution. The solutions were diluted to 100 ml with distilled water. The solutions were allowed to stand for about 10 minutes to develop color. The absorbance of each solution was recorded with a UV visible spectrometer at 506 nm. A sample blank with water was also proceeded in the same manner. The correct absorbance was determined for each standard by subtracting the absorbance of the blank. A calibration curve for adsorption of iron was drawn between absorbance and iron concentration [10].

5 sample of each adsorbent (0.5 gm) was taken in a reagent bottle. Various doses of iron concentration in the range of 100-500 μgm were added to each solution and diluted to 100 ml with distilled water. The solutions were agitated on a shaker at 400 rpm for 4 hours. The samples were centrifuged at 4000 rpm to remove the residual adsorbents. The supernatants were transferred to volumetric flasks. 1 ml of hydroxylamine hydrochloride, 10 ml of phenanthroline solution, and 10 ml of sodium acetate solution were added. The volume was diluted to 100 ml and allowed to stand for 10 minutes. The absorbance was recorded for each solution on a UV visible spectrophotometer at 506 nm. The concentration of iron left in the supernatent was determined from calibration curve. 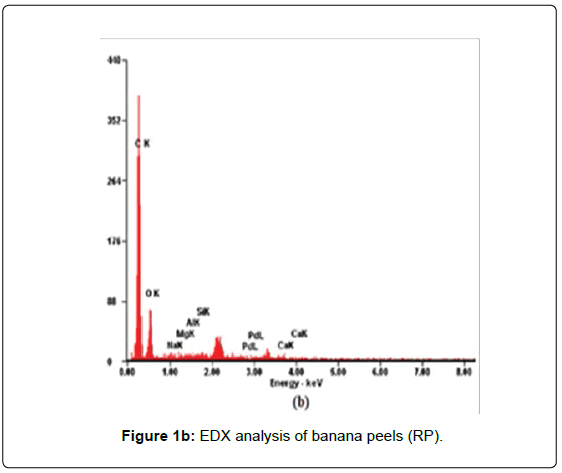 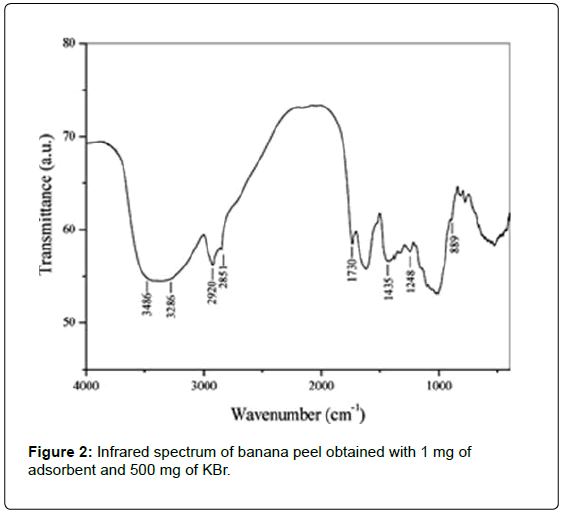 Figure 2: Infrared spectrum of banana peel obtained with 1 mg of adsorbent and 500 mg of KBr.

The study of Mendez et al. [13] showed that the main important weight changes are produced due to the light compounds volatilization and pyrolysis transformations at 450°C. This stage is primary pyrolysis (in the 300°C to 500°C range) with evolution of most gases and tars with formation of the basic structure of the char [14].

The banana peel was hydrolysed with 5% sulphuric acid followed by hydrolysis with 10% sodium hydroxide for 2.5 hours under reflux (liqour ratio: 1:15 w/v). The purpose of hyrolysis was to remove lignin as for as possible. Grafting was carried out by steeping 2 g hydolysed rice husk in acrylonitril solution for 15 minuts and then added the dissolved hydrogen peroxide (0.3 mL) and 0.5 g ferric sulphate in glacial acetic acid at 40°C for 2.5 hrs (total liquor ratio was 1:15 i.e. total quantity of grafting liquor was 100 mL). After grafting the sample was filtered washed with distilled water and then dried in air. This dried sample was extracted with distilled water in a soxhlet device for 24 hrs to dissolve the formed homopolymer. After extraction, the sample was washed with distilled water and then air dried [15]. The functionalized banana peel was characterized by FTIR spectophtometer shimadzu Prestige-21 as shown in Figures 3a and 3b. The various band specification of the spectra are given in Table 1. Figure 3a: Surface images of banana peel charcoal with carbonized temperature of 300ºC.

Figure 3b: FTIR spectra of banana peel grafted with acrylonitrile.

The adsorption of iron on modified banana peel was carried out by batch technique. Three adsorbents (RP), grafted (GP) with acrylonitril, charred peel (CP) were tested to assess their potential to remove iron from aqueous system by adsorption. The equilibria of the adsorption and the kinetics are two important physico-chemical aspects for the evaluation of the adsorption process as a unit operation. Equilibrium studies give the capacity of the adsorbent and are described by adsorption isotherms. Generally the ratio between the quantity adsorbed and that remaining in the solution at a constant temperature is at equilibrium. There are two types of adsorption isotherms i.e. Langmuir and Freundlichs Table 2.

Langmuir isotherm: The Langmuir model predict that the uptake of the adsorbate occurs on a homogenous surface by a monolayer adsorption without any interaction between the adsorbate molecules [16]. The linear form of Langmuir equation

Ce is the equilibrium concentration of adsorbate (mg/L).

Qe is the amount of the adsorbate adsorbed at equilibrium (mg/g).

The linear plot of Ce/Qe vs Ce agive a straight line. The various parameter of the Langmuir isotherm are as follows:

K and 1/n are Freundlich constants,

A linear plot of ln (Qe) vs ln (Ce) gives a straight line.

The intercept of the line is K (adsorption capacity),

Slope is 1/n (adsorption intensity) and

These both are called isotherms because it gives a straight line at constant temperature. 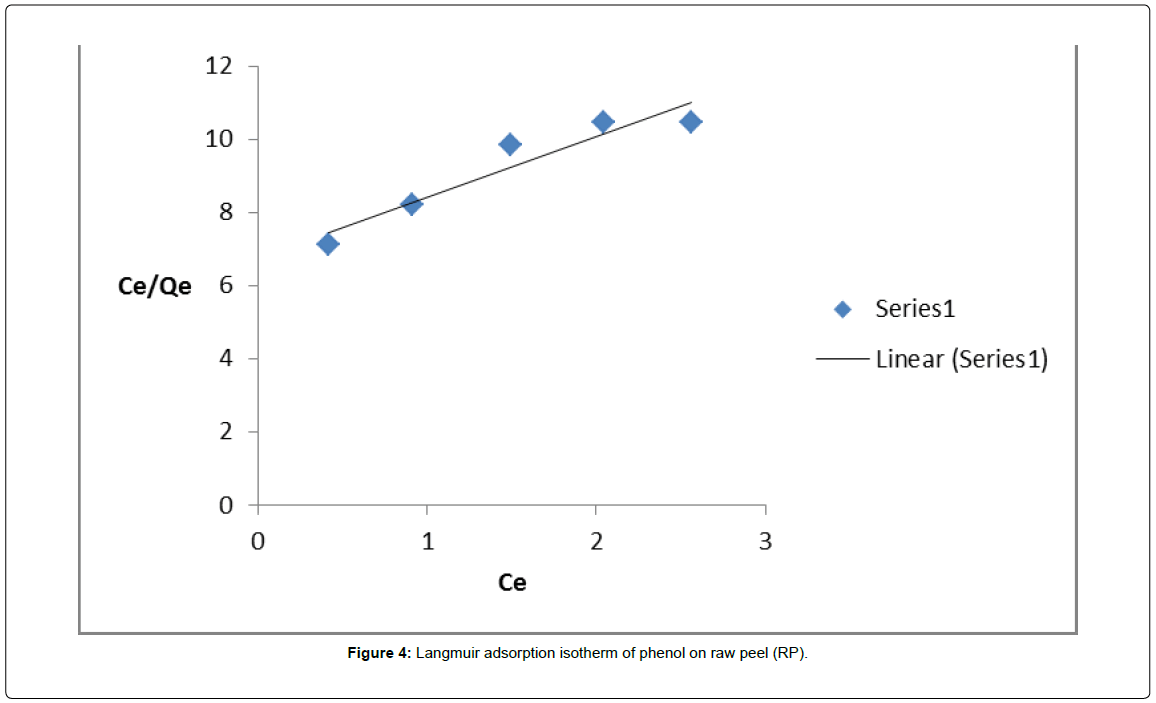 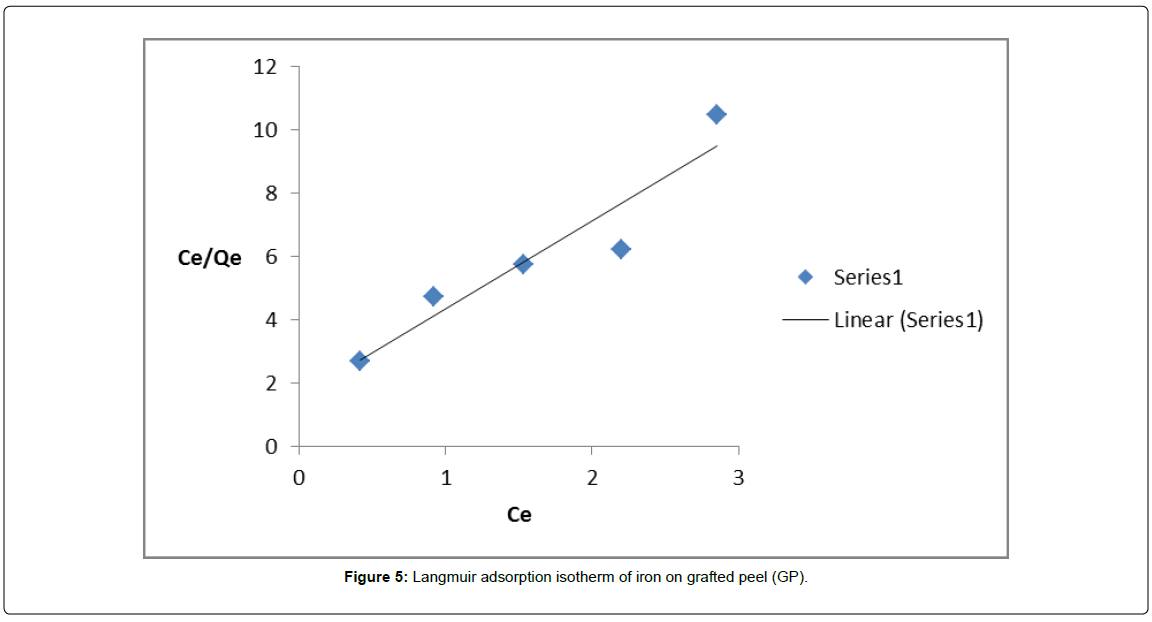 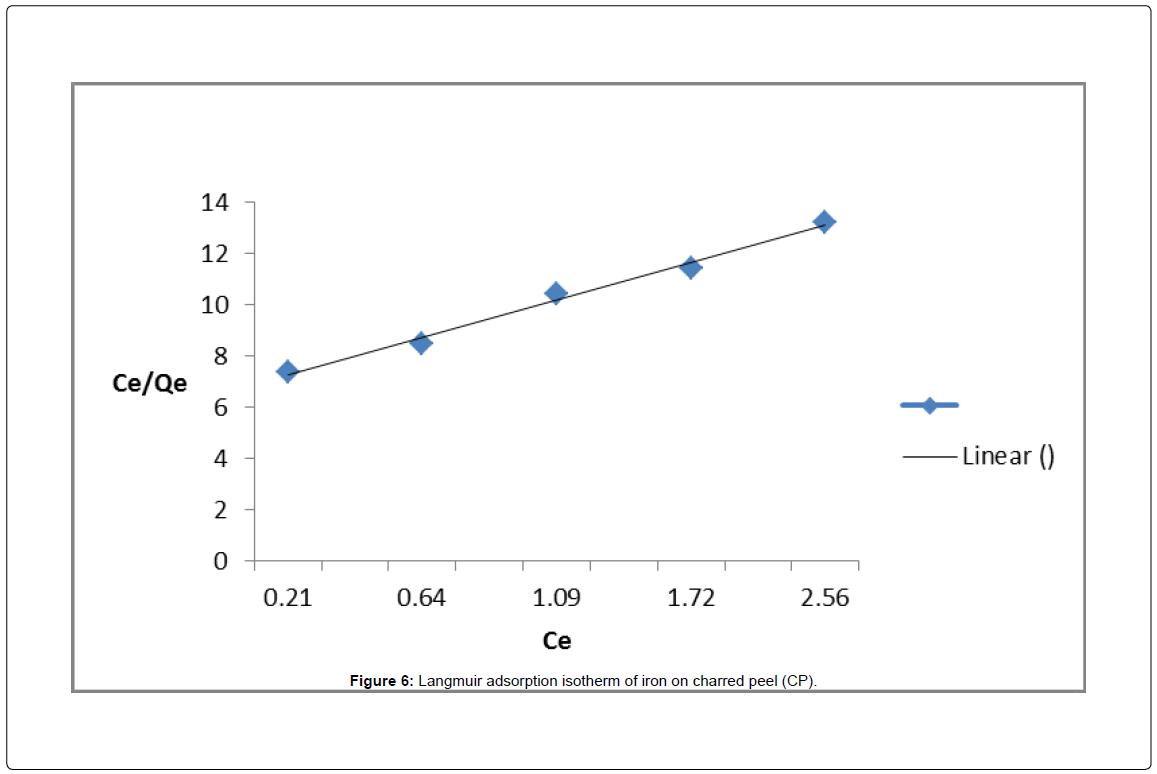 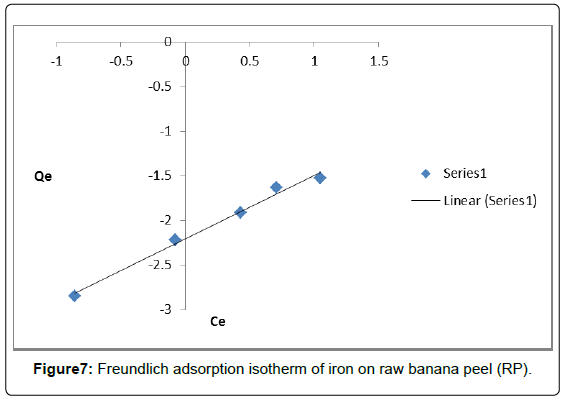 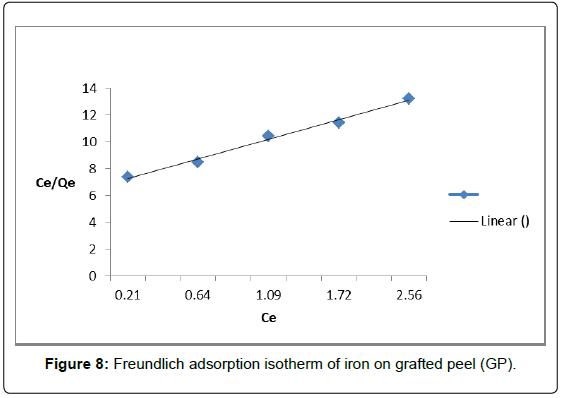 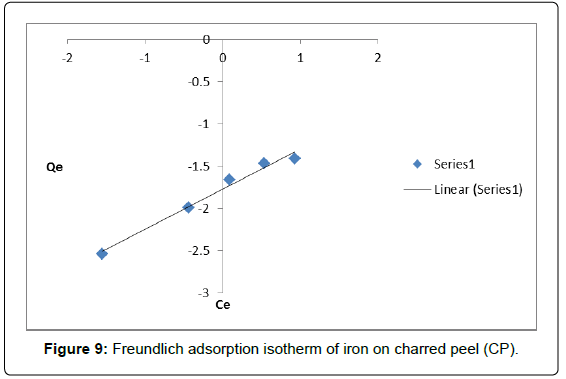 The above results show that agriculture residues including modified banana peels products can be efficiently and cost effectively used in water treatment technologies for the effective removal of various toxic metals and other hazardous substances. The use of these biowastes in water purification will not only help in the reduction of environmental pollution associated with them but will also convert them into valuable products which will be helpful in the economic growth of the community at large.