Copyright: © 2017 Proshad R, et al. This is an open-access article distributed under the terms of the Creative Commons Attribution License, which permits unrestricted use, distribution, and reproduction in any medium, provided the original author and source are credited.

Natural and anthropogenic factors affect soil pollution which significantly reduces environmental quality. In this study, six hazardous elements namely Chromium (Cr), Nickel (Ni), Arsenic (As), Cadmium (Cd) and Lead (Pb), in 12 different sampling sites around brick kiln vicinity from Bangladesh were assessed. The ranges of Cr, Ni, Cu, As, Cd and Pb in studied soils were 0.77–21.71, 4.74– 27.67, 3.08–38.56, 2.51–28.44, 1.03–8.06 and 2.23–18.31 mg/kg, respectively. Presence of these hazardous elements in soils is indicating a potential risk to the environment. Certain indices, including the enrichment factor (EF), pollution load index (PLI) and contamination factor (Ci f), geoaccumulation index (Igeo), toxic unit analysis and principal component analysis (PCA) were used to assess the ecological risk posed by hazardous elements in soils. The Ci f values of As (15.34) and Cd (37.89) revealed that the examined soils were strongly impacted by As and Cd where Pollution load index in As (1.01) and Cd (2.61) indicating progressive deterioration of soil due to metal contamination. In view of the above results, soils from all sampling sites showed considerable to very high potential ecological risk.

Brick kiln have adverse effect to soils which causes soil pollution. Soil is an in born resource for the survival of living being which concerned as the explanation receiver of the merciless pollutants like hazardous elements [1]. Hazardous elements are of great concern due to their wide sources, toxicity, non-biodegradable properties and accumulative behaviors [2]. Trace metals such as Chromium (Cr), Nickel (Ni), Arsenic (As), Cadmium (Cd) and Lead (Pb) have been considered as the most toxic elements in the environment by the US Environment Protection Agency (EPA) [1,3]. Brick production in brick kiln is traditional and fast growing industry in many parts of Asia like Bangladesh. Due to industrialization, use of bricks are increasing day by day as attractive building materials and for this an ample amount of brick kiln industries are set up here and there in Bangladesh. For very speedy urbanization, to meet the requirement of brick in construction industry there produce about 8.6 billion bricks per year. The annual rate of demand for the bricks rising is about 5.28% and which is rapidly increasing every year [4]. Hazardous elements may originate in soils around brick kiln area from different sources of which are industrial activities, fuel and coal combustion, wood burning, tyres and furnace oil in the brick kiln [5]. From brick kilns, ambient hazardous elements are being brought forward every year which are mixed up with air causes air pollution and rest are being stored in soils and create soil toxicity [6]. Therefore, the accumulation of hazardous elements in soils is of increasing concern due to their potential risk, and detrimental effects on soil ecosystems [7,8]. In brick kiln area, there should be concern about the soil pollution and ecological risks because the rate of emission of toxic substance is very high in developing countries, especially in Bangladesh as the rules and regulations are being broken which should be maintained for brick kiln. Different methods are usually used to determine hazardous elements contamination in soil like contamination factor (Cif), enrichment factor (EF), geoaccumulation index (Igeo), pollution load index (PLI) etc. [9]. The EF of an area indicates the relative enrichment in any contaminant when compared to pre-industrial soils from the same environment [10,11]. As soil pollution arising from brick kiln, the study area have raised attention due to its environmental pollution which is facing serious threats due to elemental pollution originated from the rapid expansion, congestion, and activities from brick kilns [12]. Several studies have reported the concentration of hazardous elements in agricultural soils due to brick kiln in Bangladesh [13-15]. The main aim to present research are to address the problem of hazardous elements like Cr, Ni, Cu, As, Cd, and Pb around brick kiln area soils and to find out the ecological risk of such hazardous elements in soils around brick kiln area in Bangladesh.

Twelve different sampling sites were selected for this study in Tangail district, Bangladesh (Figure 1). The area of Tangail district is 3414.28 km2 and located at the center point in Bangladesh. Tangail district is one of the most densely polluted areas in Bangladesh where the density of population is 1.100/km2 (2011 census). The study area is situated between 24° 01' and 24° 47' north latitudes and between 89° 44' and 90° 18' east longitudes (Wikipedia). During March- April, 2016 soil samples were collected. Twelve sampling sites were selected around the brick kiln area. In every sampling site, agricultural soil samples (surface soils) were accumulated in the form of three subsamples. To make a composite sample, three subsamples were mixed together. Samples were kept in cool place and dried in air at room temperature for two weeks, then these were ground and homogenized for determination of hazardous elements. A porcelain mortar and pestle was used to crumble the soils and 2 mm nylon sieve was used to sieve the soils and stored in an airtight clean Ziploc bag and kept frozen until chemical analysis.

Figure 1: Map of the sampling sites in Tangail district, Bangladesh.

Contamination factor (Cif): The (Cif) may be defined as the ratio of the metal concentration in the soil to that of baseline or background value (background value is considered as toxic elements in the preindustrial soil around research vicinity)

According to the intensities of contamination, the levels of contamination may be divided on six categories which range from 1 to 6: very high degree (Cif = 6), considerable degree (3 = Cif < 6), moderate degree (1 = Cif < 3) and low degree (Cif < 1) [16,17]. Thus, the enrichment of each metal may be monitored by Cif values over a long time in soils.

Where, (CM/CAl)sample is assumed as ratio of hazardous element concentration of (CM) to that of aluminum (CAl) in the soil sample, and (CM/CAl))background is the same reference ratio in the background sample. If the EF value of heavy metals is 1, it means that metal may be entirely from crustal materials or natural weathering processes [20]. It is stating a fact of human interference if enrichment factor of samples is more than 1.5. An EF of 1.5–3, 3–5, 5–10 and >10 is considered the evidence of minor, moderate, severe, and very severe modification [21].

Igeo may be considered as an effective tool for assessing degree of contamination from hazardous element. It use universally for determination of soil concentration now a days [22]. One of the most important purposes for assessing Igeo is to characterize the level of pollution from soil. Igeo can be determined adopting following equation

The overall toxicity status of heavy metals in soils may be assessed from Pollution load index (PLI) calculation. PLI is the share of conclusion of six heavy metals.

The data were statistically analysed using the statistical package, SPSS 20.0 (SPSS, USA). The means of the hazardous element concentrations in soils were calculated. Multivariate methods in terms of principal component analysis (PCA) were used to interpret the potential sources of hazardous element in soil. Other calculations were performed by Microsoft Excel 2010.

Physicochemical Properties and Metals in Soil

The physicochemical properties of soil are presented in Table 1. The studied soils were slightly acidic to neutral excluding the S11 site that was alkaline (Table 1) because of decomposition of organic matter and subsequent formation of carbonic acid [27]. Electrical conductivity (EC) value of the soil was non saline (0-2 dS/m; SRDI soil salinity class) for all sampling sites which mean the salinity effect is negligible on crop plants. Organic carbon (%C) ranging 0.551-3.65 where the highest value was observed in soil collected from the S5 site. The textural class of the soil were loam, sandy loam and silt loam (Table 1) according to the United States soil texture classification. The concentrations of heavy metals were measured to estimate the Contamination Factor (Figure 5) and enrichment factors with pollution load index of soil. Mean concentrations of Cr, Ni, Cu, As, Cd, and Pb in soil were 10.41, 12.69, 15.66, 12.15, 3.1, and 7.98 mg/kg, respectively (Table 2 and Figure 2) found around brick kiln area of Tangail district, Bangladesh. Metals in soils were compared with the other studies in Bangladesh and other countries. Arsenic and cadmium concentrations of the present study were higher than those of the study conducted in Bangladesh, India, Spain, and Turkey (Table 3), pointing out that soils were contaminated by As and Cd. The mean concentrations of As was above the Canadian guideline and Cd in the present study were above the Dutch soil quality standard [28], Canadian guideline and Australian guideline (Table 2). The contaminations of these agricultural fields’ soils are a major concern because foods are still being grown on these soils. The Dutch soil quality standard is regarded as the most suitable guideline indicating all possible exposure pathways for protecting humans, plants, and animals. If any metal concentration in soil is below its respective Dutch Target Value, the soil is considered clean. If the concentration level lies between the target values and intervention values, the soil is regarded to be slightly to moderately contaminated. In contrast, if the value is above the Dutch Intervention Value, the soil is considered detrimental to humans, plants, and animals. According to Table 2, Cd was in the worst situation among the studied metals as the mean concentration of Cd was more than 4 times higher than the Dutch Target value. 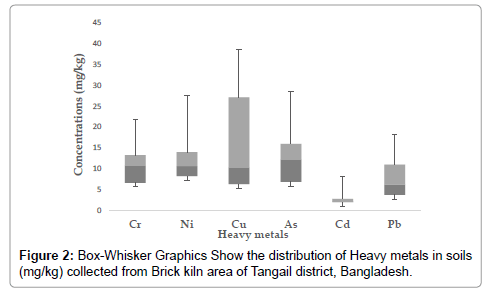 Table 3: Comparison of metal concentration (mg/kg) in soil of present study with other study and guideline values. 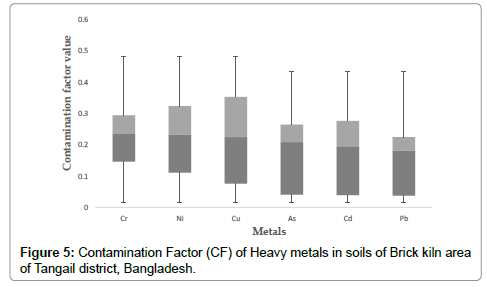 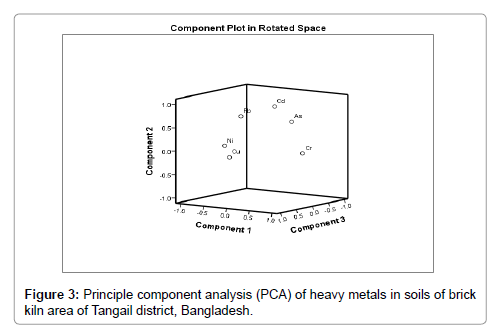 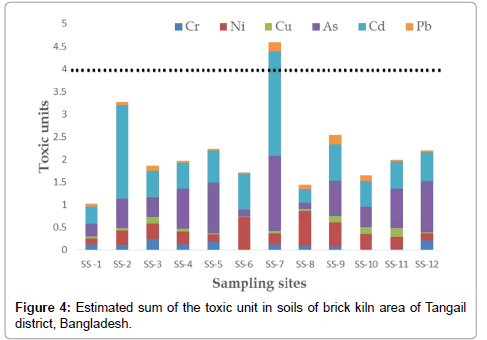 The EF values of several soils are given in Figure 6 and Table 5. Average EF values of metals in the present study indicate enrichments in soils of various sampling sites in Tangail district, Bangladesh. As and Cd showed the highest EF value indicate the soil pollution for all the sampling sites. 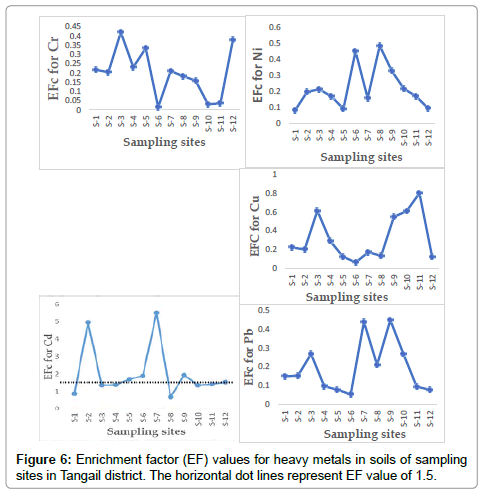 Igeo values of present study were presented in Figure 7. For all heavy metals, the Igeo values indicated the decreasing order of Cd>As>Cu>Ni>Pb>Cr. The mean of Igeo values for Cd was 3.104 indicating the soils were heavily contaminated with Cd. 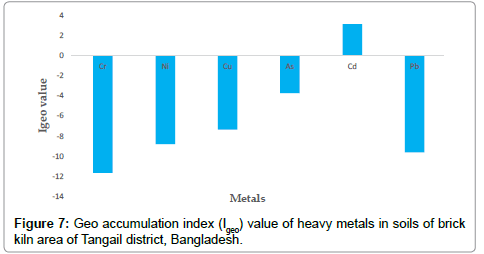 Pollution load index (PLI) value is zero means perfection. If PLI value is equal to 1, it indicates the pollutants are in background level and PLI values more than 1 comprise the soil is in progressive deterioration contamination of heavy metals [31,33]. The pollution state is proportional to numerical PLI value. As per above mentioned value, studied soils were contaminated by Cd and it was noticed that PLI values of all sampling sites were more than one (Figure 8). 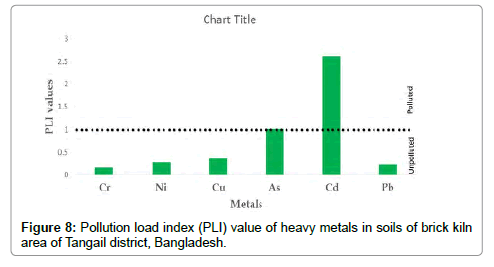 The authors thank the authority of Patuakhali Science and Technology University (PSTU), Bangladesh and Yokohama National University, Japan for providing laboratory facilities to complete this study. The authors also delighted to express their gratefulness and sincerest thanks to Dr. Md. Saiful Islam, Associate Professor, Department of Soil Science Patuakhali Science and Technology University, for his valuable suggestions and cooperation to carry out this research.